Jojo Yang explains why she loves rolling joints, taking her Puffco Peak to parties, and doing electrical engineering while high.

You might not associate dab enthusiasts with mechanical engineering or philanthropy, but maybe you should. Without giving the whole story away, Jojo Yang is a prime example of how possible it is to be a productive member of society while enjoying tiny joints and fat dabs on the daily. If you've ever wondered how to get into concentrates or combine your passions for art, design, and philanthropy into one solid business idea, you've come to the right place.

We had the opportunity to visit Jojo at her home in Los Angeles and chat about all things work, life, and weed. This is Jojo's story as told to Proper. 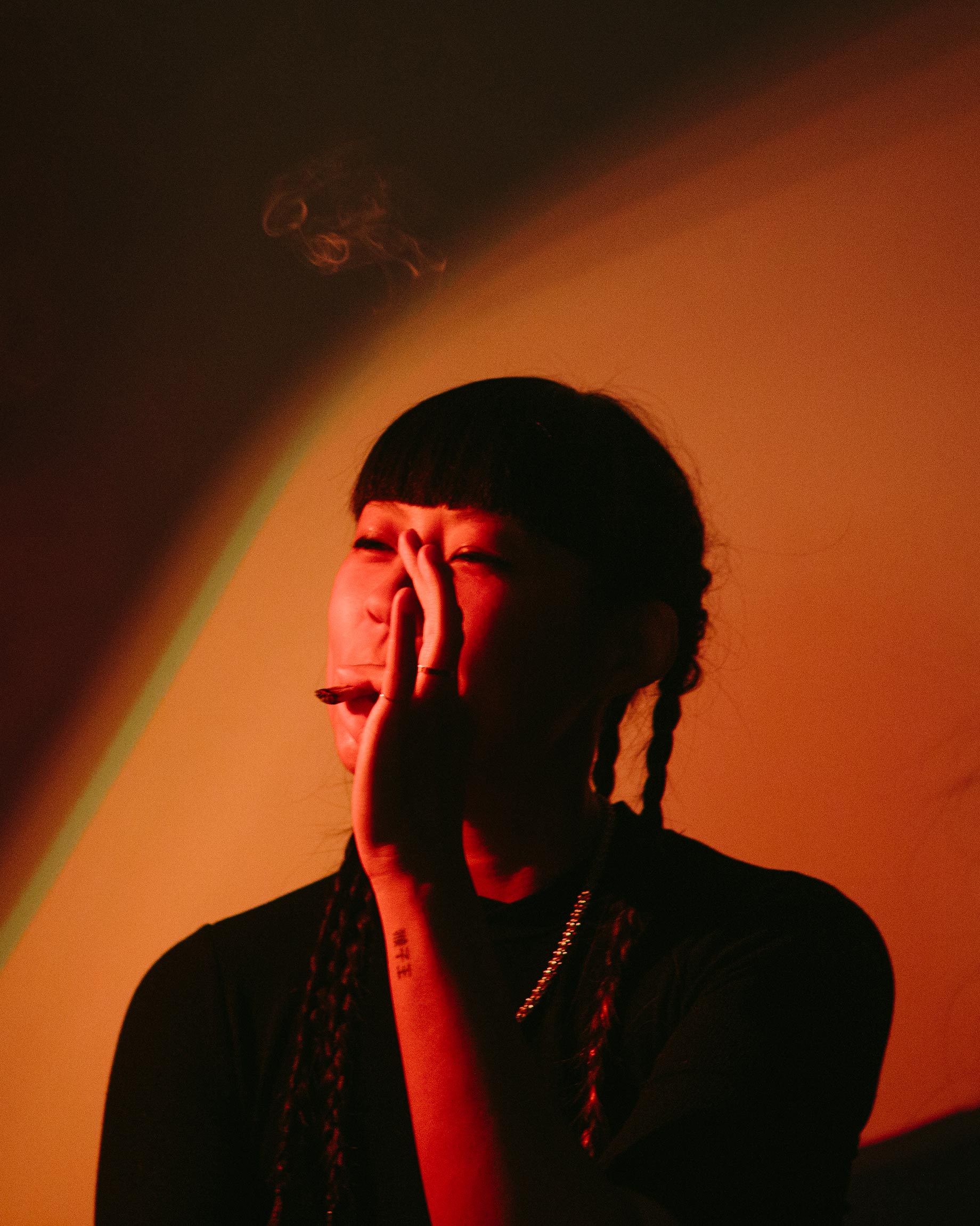 On being a craft show kid

I grew up in New York, in Westchester. I went to an all-girls Catholic high school. My mom is a pretty conservative Catholic I would say, but also politically liberal, and my dad is an atheist. It might seem like I grew up in a very strict Catholic household when actually it was very 50/50. My mom is also an artist and a ceramicist. On weekends, I would go with my parents to different craft shows around the country and always called myself a craft show kid growing up. And craft show kids would all unite at these craft shows because we all knew each other. I was always forced to go to museums and sketch and all that stuff. So, from a very young age, I was interested in the arts.

I'm kind of weird because I love the arts, but I'm also very technical and analytical, like really good at math. Because of that, my mom steered me towards engineering. Physics was also my favorite topic in high school so it made sense that I would want to pursue mechanical engineering. I ended up going to college in Chicago and never moved back to New York. I went to Northwestern where I majored in manufacturing and design engineering, which was much more challenging than I had expected.

On becoming an engineer and DJ

Like other techies who have some social skills, I ended up trying to be in the consulting industry. I jumped on that train and started working for a consulting company right out of college, Accenture, which is a beast of a technical consulting company. But I got burnt out after two years. For two years straight, Monday through Thursday, I was working just outside of Denver, Colorado, and then flying back to Chicago on Thursday for the weekend. So, I took a year off to DJ.

“I learned that the hustle life wasn't necessarily for me. ”

I started DJing full-time from December 2008 to December 2009. I played Lollapalooza. After I played Lollapalooza, I felt like I had hit a good point in my DJ career where I could buckle down and have a real job again. And I learned that the hustle life wasn't necessarily for me. I happened to get a phone call from a headhunter at another consulting company that was much smaller than the one I was at before. So, I interviewed with them and then shortly after joined that company, Saggezza Inc.

Eventually, I moved to L.A. because I was over the bitter winters of Chicago. I'm happy I lived in Chicago for so long because it really made me appreciate L.A. that much more. Now I work for an American multinational technology conglomerate. But three years ago, my friend and fellow DJ Kyle looked me up and was like, "I have this idea for an app that empowers artists and DJs to fundraise for charities that they love using their music." The concept evolved many times in many different integrations, business models, and formats before we finally landed on SingleServ. With SingleServ, we have these charity campaigns we partner with artists. So, every time a user streams the song, we keep track of that number, and then we donate twice the amount that Spotify pays out to the charity directly. We're at the beginning stages of our app, but we are excited about growing. That's where we're at right now. 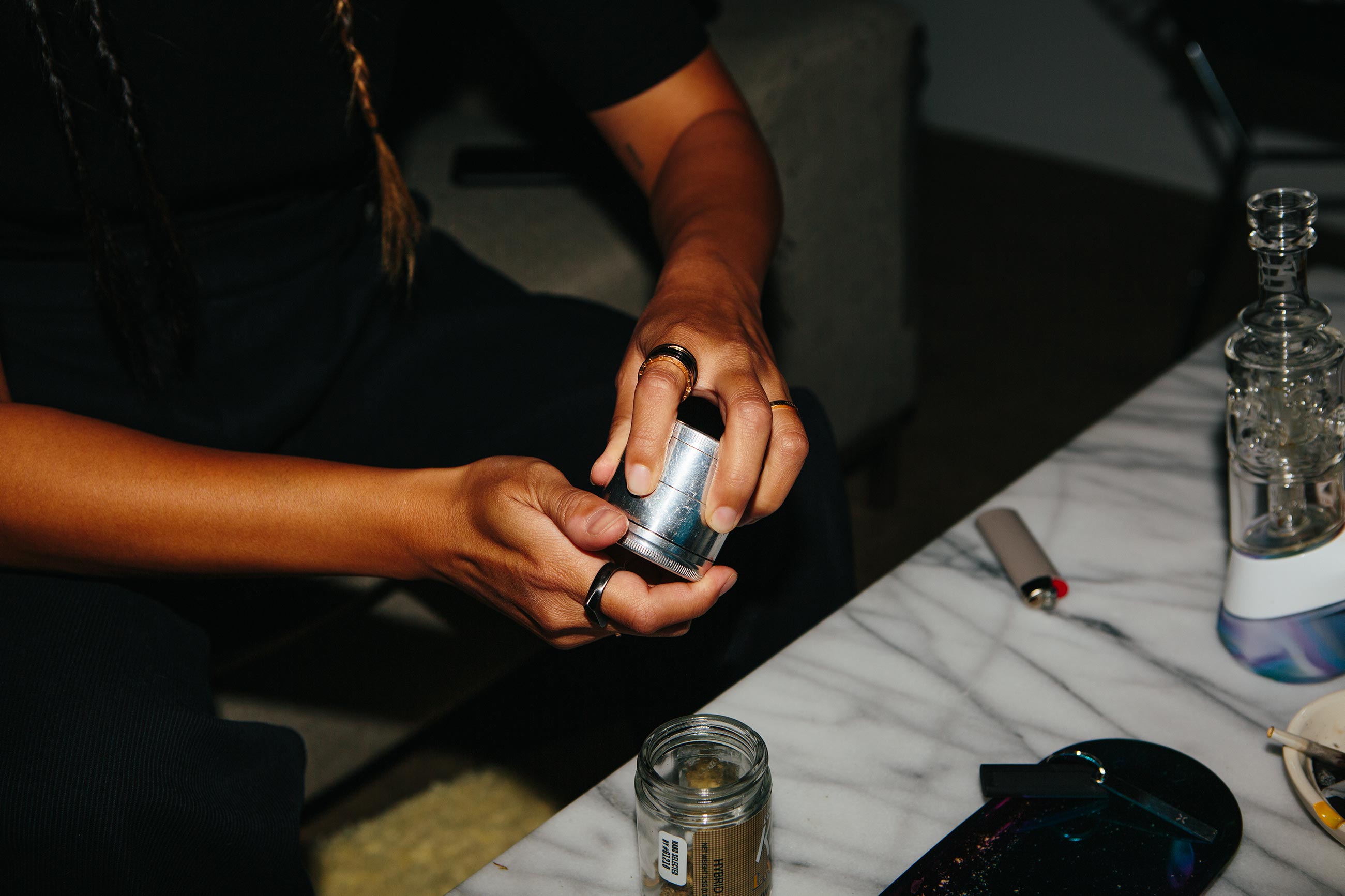 On having a rocky start with weed

The first time I tried weed I was in college. I remember the first time I truly got high was when I hit this bubbler. And I was supposed to go to a Jurassic 5 concert that night. I was so stoned that I thought I couldn't control my limbs. I remember hitting the hallway wall with my bag and just sliding down the wall. Like a piece of goop.

“I became more of a weed connoisseur through dating this weed-dealing dog walker.”

After that experience, I was—like a lot of people—turned off by weed. I would dabble here and there, but not frequently. I would smoke on 4/20 and there was this one 4/20 where I had to finish an Electrical Engineering 101 project where it involved creating some sort of breadboard. Long story short, I had a great experience doing this project super stoned and I did really well on it. So, I was like, "Okay. Maybe I can be productive and still be a stoner."

After college, I met my first girlfriend and she was a dog walker/weed dealer, which is actually a very common combination. Since then, I've met a lot of dog-walking weed dealers, but she really solidified my love for weed. She would make me smell the different flowers and try everything. I became more of a weed connoisseur through dating this weed-dealing dog walker.

I would say that weed definitely plays a large part in my life right now, in the sense that, I have a lot of stuff going on. And I have a really good way of compartmentalizing in general. But weed keeps me chill. And I love the ritual of rolling joints. One of my best friends from college is my joint rolling sensei. Right after college when I started really getting into weed, he taught me his secrets to rolling the perfect joint. And I really practiced and put a lot of time into it. I've been to Amsterdam and beat out coffee shop owners in joint-rolling competitions.

I love the act of rolling joints partially because it's a craft. It kind of ties into the whole design thing for me. I can craft a really nice joint and I'm really proud of that and that's nice. 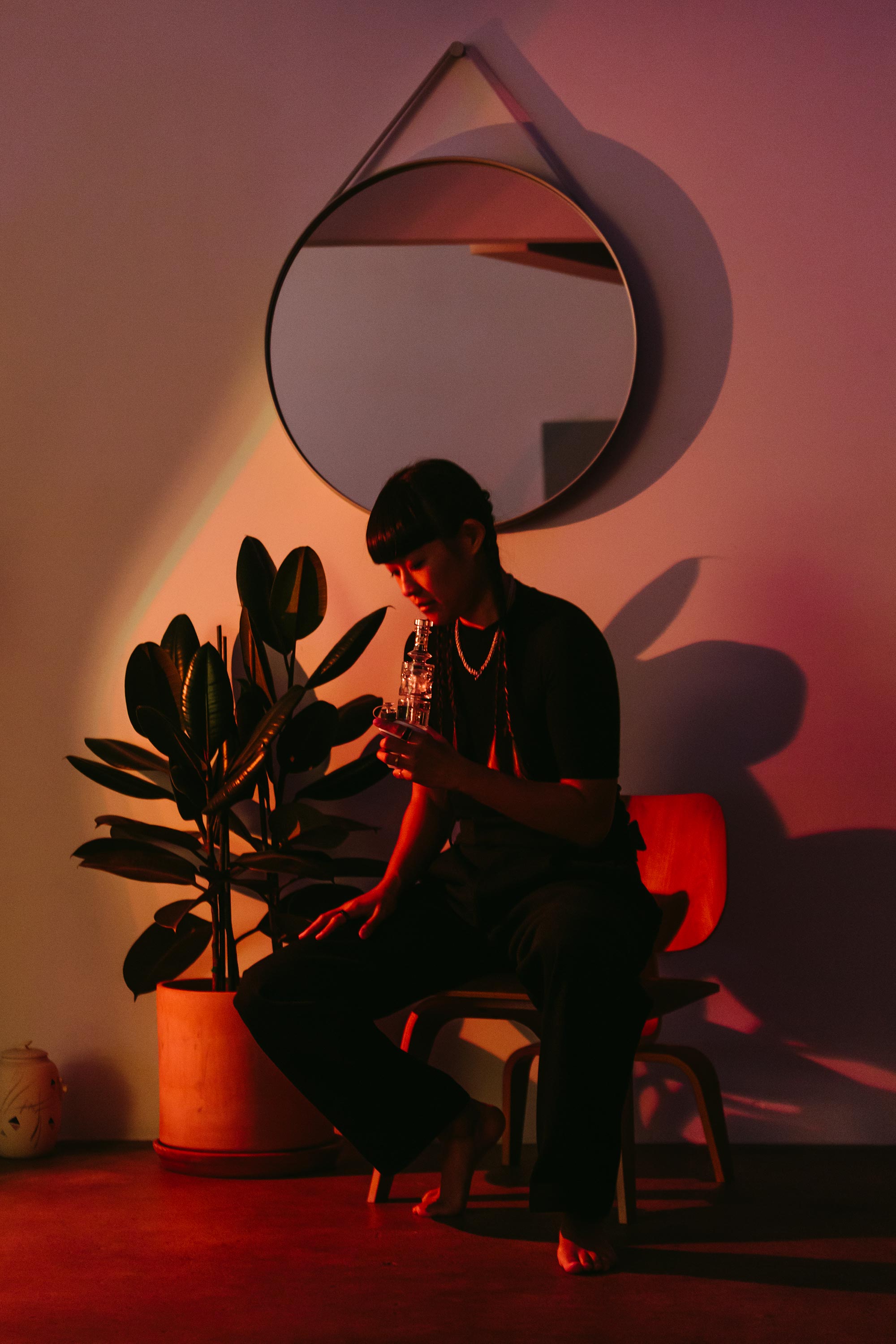 On embracing dabs and tiny pre-rolls

For me, ritual comes into everything. When I first got the Puffco Peak, I was so excited about it and I brought it everywhere. Every party I went to, I would just bring my Puffco. Before that, I had never gone into the world of dabbing before because it scared the shit out of me. The blowtorch and the rig—it looked nuts. And I felt like I was a hardcore drug user when I would have to use a blowtorch, so that was not something I ever dabbled with—pun intended. But since getting the Puffco, I can easily try different concentrates and that’s awesome.

When it comes to flower, Pure Beauty has been my number one. That's because of their impeccable branding, really, but I would say the Pure Beauty Babies are my favorite. Just because I love carrying them around. They're super convenient. A great high. And then they look so damn good. I mean the convenience factor is what it's all about because they're so small that it's easy to share with one other person. And then you don't have to worry about being super stoned because you had to finish a joint. They're tiny.

I always want to take tolerance breaks, but I don't end up doing it. Even when I travel, I sneak vapes with me wherever I go. My wife is from Copenhagen, so I have been there many times with vape pens, which is by the way awesome because people get blown away. I blow away my Copenhagen friends with vape pens and an apple pipe. Nobody had ever tried the apple pipe before, and I was like, "Hey guys, check this out." And I made an apple pipe really quickly. And they're like, "What? We can smoke out of an apple?" And I was like, "Yeah."

I don't think that weed affects my life negatively in any way so I don't think it's something that I need to necessarily take a break from. But to lower my tolerance again? I would definitely consider that.

Take it slow, newbies. Don't go into a dispensary and be like, "I want top-shelf, private reserve connoisseur weed." You might be getting the best stuff, but it's usually also the strongest stuff. From there, take a hit and just wait. Even if you don't want to wait, wait. And maybe don't start with edibles.

It also wouldn’t hurt to be in a chill environment and maybe have a seasoned pothead guide you through it. If you freak out, they can be like, "Don't worry. It'll pass."

Be sure to check out our full catalog of pre-rolls and top-rated concentrates to go with that Puffco Peak.