Leif Goods is raising the bar on chocolate bars. CEO Carrie Solomon explains how she and her team did it.

I first became acquainted with Leif Goods through my local dispensary. Hundreds of edibles hit the market a few months after the recreational law took effect, but Leif alone seemed to speak to me explicitly. The sleek, design-geek packaging, the robust full-spectrum RSO extracts, and flavor profiles that felt better suited to a Whole Foods specialty aisle than the counter case of a pot shop were, in my eyes, trailblazing. Leif Goods didn’t fit into the antiquated stoner stereotype, and Carrie Solomon was steering her brand of top-shelf medicated chocolates into new terrain.

Since their 2014 inception, Leif’s line of chocolate bars has been a constant presence in my life. Their PB&J bar, a 1:1, 66% dark chocolate fantasy dusted with strawberry powder and medicated with around 3-5 mg each of THC and CBD per piece (45mg of both THC and CBD per bar) has repeatedly seen me through some of my most painful menstrual symptoms. And I’ve recommended their coffee crunch bar, a milk chocolate bar with a bold coffee flavor and flecks of house-made biscotti, to no less than a dozen of my female friends when their partners/kids/careers/the world have them feeling less than their goddess selves. I have been known to slip a bar of Leif’s 20:1, high-CBD salted chocolate into my husband's day pack when I know he has a stressful day ahead. Bottom line: This brand gets me.

I recently met Carrie at her soon-to-be-opened chocolate cafe, Greater Goods. The storefront, perfectly positioned in a mixed-use building that also houses Oregonian’s 2015 Restaurant of the Year, Renata, further crystallizes the brand. This is esteemed Portland foodie territory. I swung open the butcher-paper-blocked glass door to a photo session in progress. I heard the directive to “smize” voiced from the photo team and Carrie and I shared a look that immediately communicated a shared recognition of and appreciation for Tyra Banks’ continued relevance among a younger generation of creatives. A laugh was had and a connection was made.

“I just wasn't terribly happy working for somebody else.”

Our conversation began with Carrie’s pivot from the world of design to the world of cannabis. According to her resume, she’s served as a creative director for a number of high-profile global campaigns. But, in Carrie’s words, “I just wasn't terribly happy working for somebody else.” When I asked how she ended up migrating from New York to the beaver state, Carrie replied, “Well Jody, my husband, and I would come visit. We would rent a house and rent a car and I was like, this is kind of nice. I kind of want a house and a car. And then we'd go back to Brooklyn and it was… Brooklyn.”

And so, in 2010, Carrie and Jody relocated from their East Coast home to the Pacific Northwest. Though both flourished in their respective arts once they arrived (Jody is a fine art photographer), it was actually Jody’s experience with topicals as a medical marijuana patient that inspired the two career creatives to launch Leif. “Jody had chronic pain and he was primarily using topicals,” Carrie says. “Some of his favorite products started to disappear from the shelves because new testing rules were put into place. When one of the best products just disappeared, I said to Jody, ‘You really should make your own (topical).’ So, he did. We made it non-greasy and uber potent. As a designer, I thought this is amazing. We can just go sell these. So, I threw together a quick brand.” 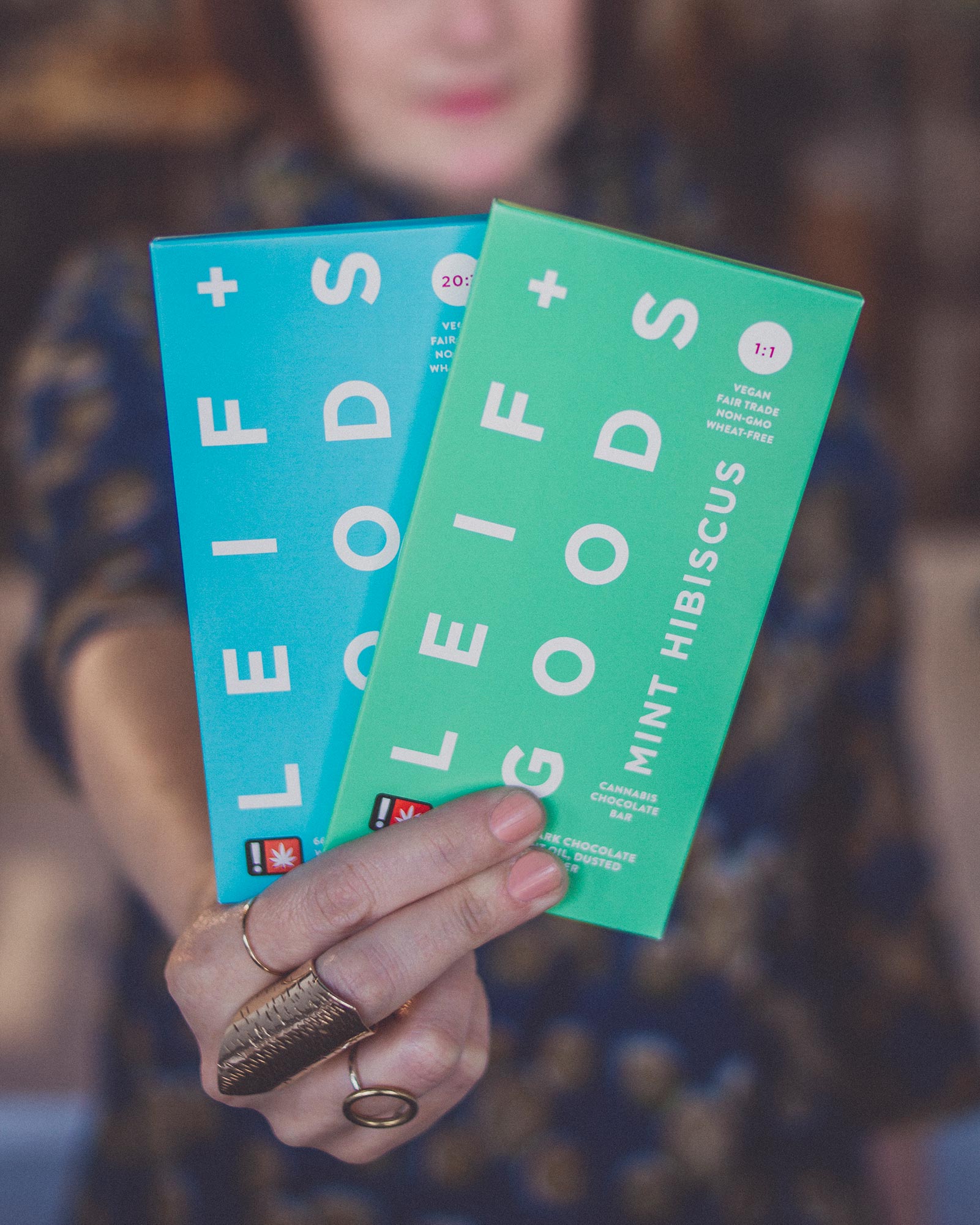 That quick brand was Physic, Leif’s flagship topical, which still constitutes a third of Leif’s revenue. Their fragrant Field Balm and Wood Balm both offer targeted muscle relief as well as borderline romantic aromatherapeutic effects. For Leif, Physic was the first step towards becoming the ubiquitous brand they are today. As Carrie explains, “We very quickly fell into the edible world. I saw it as an opportunity to start a business that wasn't a design agency or just a small freelance conglomerate. We started to see that opportunity in edibles in particular because the bar was really low at the time, the packaging wasn't terribly exciting. I mean, it was clamshell clear cases with Avery labels. We wanted to do something a little more stylish and a little more high-end.”

Leif’s bars are, first and foremost, damn good chocolate, but when I asked Carrie what Leif products she uses and for what purposes, her answer surprised me. “I consume more of our CBD stuff. We kind of departed from the high-THC angle because our consumer is really the person that wants a little easier high that’s more about relaxation than psychoactive activity.” This is the adult contemporary experience in action. Strain specificity is eschewed for a consistent, balanced high that affects the body more than the mind. Carrie describes cannabinoid ratios that rely heavily on CBD, furthering the point that Leif’s confections are literally filling in the gaps for users who may have outgrown 6ft bongs and blacklight posters but still value the very real benefits of cannabis.

“Chocolate creates sensations. So, when you couple that with cannabis it's an amazing cocktail of nature's bounty.”

When our chat turns briefly to cannabinology, it is so Carrie can explain the reasoning behind putting 1:1, 3:2, or 20:1 CBD:THC ratios in all of her chocolates. “Some people really feel like that strain specificity works, some people think it’s a placebo effect,” she says. “There've been some very unscientific focus groups, so what we like to do is just let people know what strains are included so they can come to their own conclusions without us saying you're going to feel this way or that way.”

While we’re on the topic of feelings, I asked Carrie if she thought there was an extension to the entourage effect when cannabis and chocolate come together. Carrie suggests, “I think the entourage effect is specific to cannabinology. The entourage effect is all about cannabinoids. However, Anandamide is in chocolate. That is also the chemical that is created when you consume THC. Chocolate creates sensations. So, when you couple that with cannabis it's an amazing cocktail of nature's bounty. I think it's fascinating. There are all these things about chocolate that are aiding and abetting and amplifying the experience. It’s not an entourage, they're more like partners in crime.” 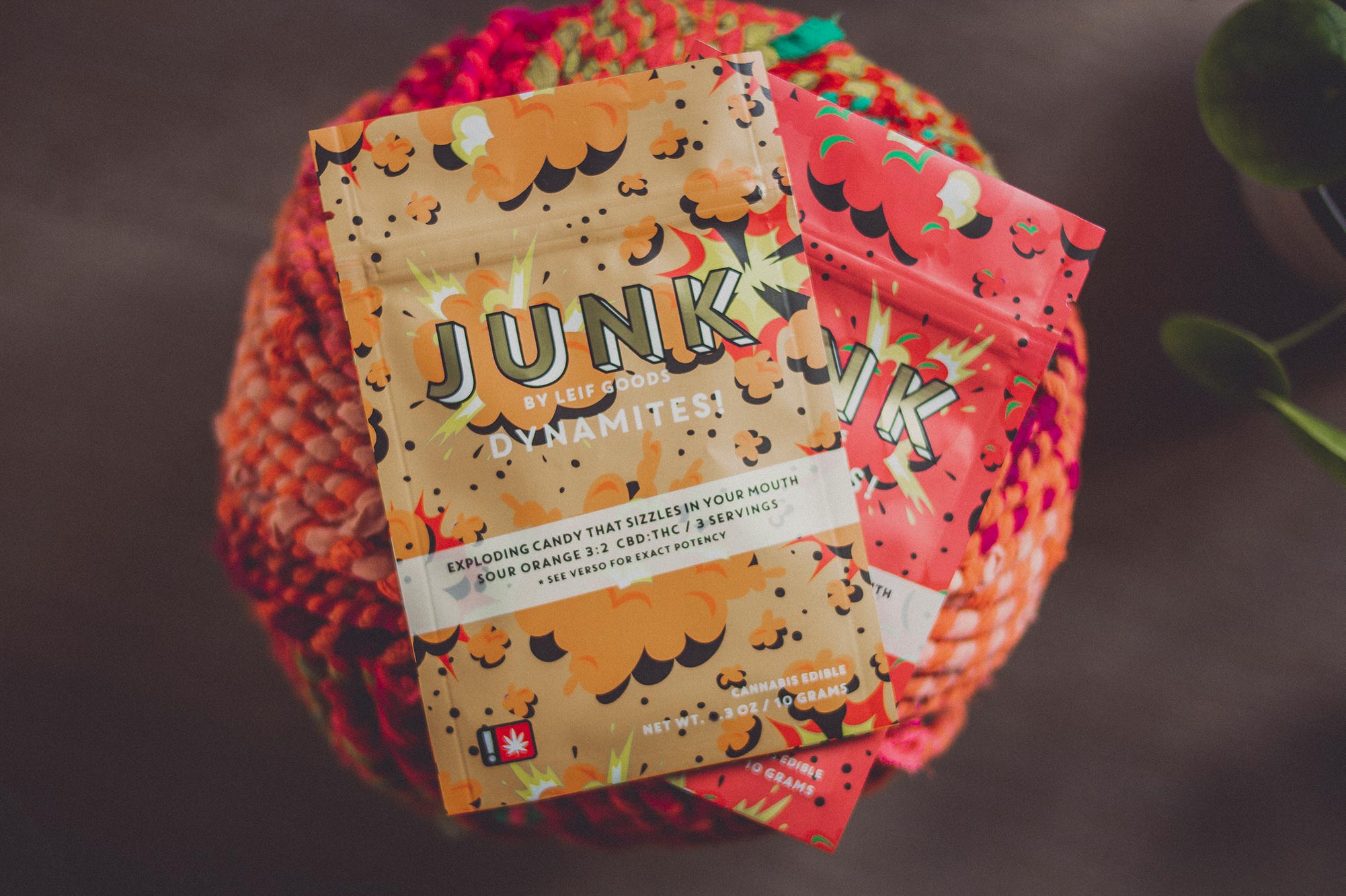 All of this left me wondering, were it not for some botanical wizardry that somehow bolsters the efforts of cannabis, what on earth could have inspired Leif’s best-selling Mint Hibiscus chocolate bar? At this, Carrie’s smile broadened. “When I was in graduate school, I was studying with Milton Glaser. His project was to create a million-dollar idea. I grew up really close to Baltimore, and there's this treat they make there called lemon peppermint sticks. They take a lemon, they core it out, they kind of smoosh it down so the juices come out. Then they stick a peppermint stick in the center of it so you can suck the lemon juice through the peppermint stick. It's completely nauseating and incredibly delicious. It's very specific to where I grew up,” Carrie says.

“It's completely nauseating and incredibly delicious.”

“So, I made a concept candy, it was called Pepper Tarts. It was this combination of citrus and mint. And I remember it went over really, really well. This famous designer was like, ‘That's amazing. That's your million-dollar idea.’ I carried that with me for a long time. When we finally had our own business, it ended up being our best-selling flavor across the board. We've obviously modified it a little bit. The hibiscus took place of lemon, but it became super popular. It’s a really neat, full-circle kind of story.”

If that backstory made her glow with happiness, the light in her eyes really started to shine once she started telling me about Junk, Leif’s line of throwback candies. A decided departure from their high-concept, adult-contemporary, luxury chocolate, Junk's line of products includes Dynamites, a fizzing, pop-rock-style candy gravel, Butterfly Bars, a fun-size Butterfinger/chick-o-stick effigy, and jumbo marshmallow Bon-Bons enrobed in medicated chocolate finished with chocolate salt. Carrie practically danced in her seat as she extolled its virtues, saying, “We've created this thing that came from joy and happiness and creative freedom and to keep it going, we have to maintain that attitude in life. That's exciting to me. When you create something really fancy and really serious, you kind of find yourself living in that mentality. It's like method acting. But this product line has pushed us in a place where we can adopt that thinking existentially. There's a world of possibilities with Junk." 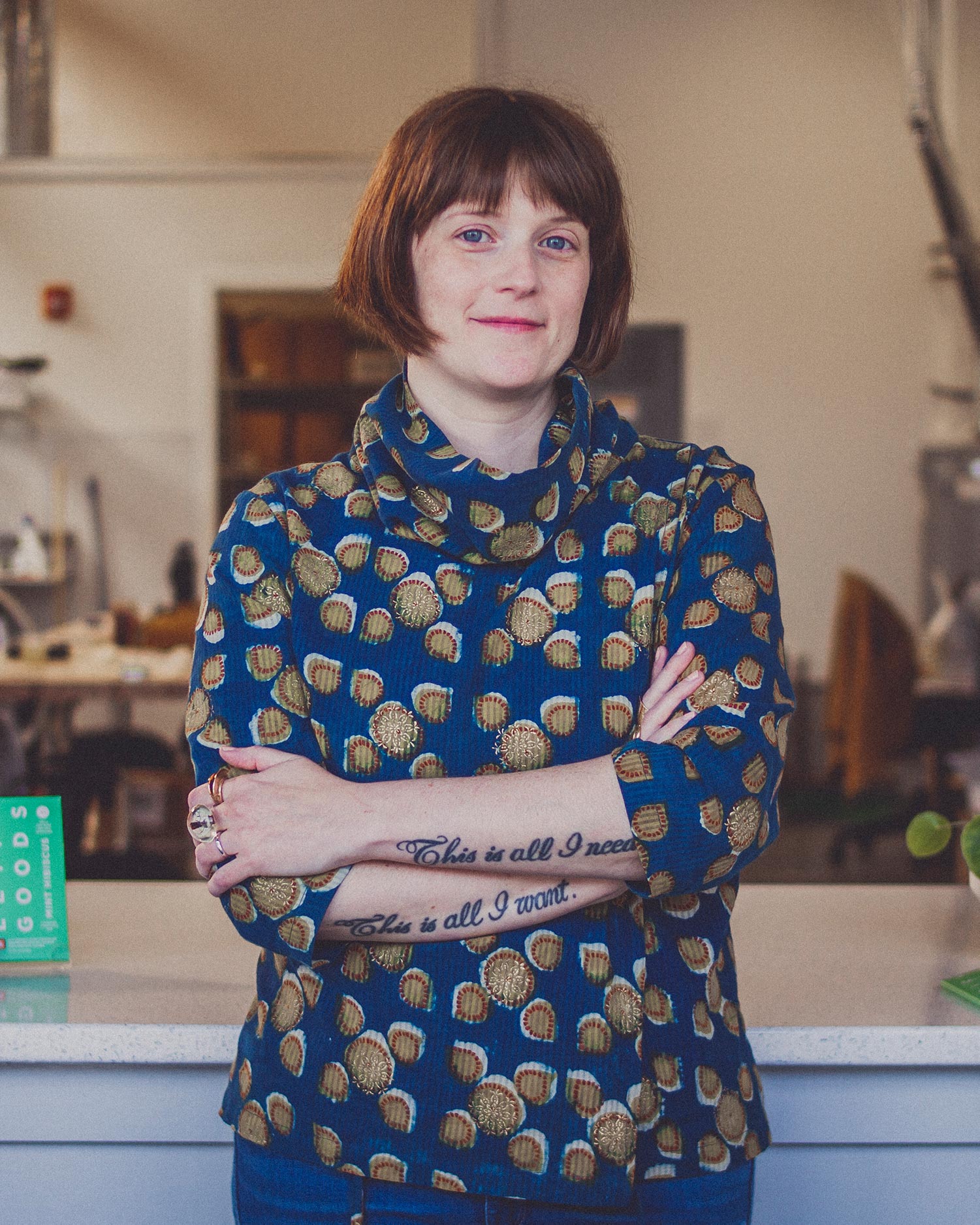 There’s still one more thread to follow in Leif’s inspiration intersection: activism and philanthropy. In June of 2018, Leif Goods created a campaign to funnel profits from their bars into relief efforts for children separated from their parents at the Mexican-American border. “You get upset about all kinds of things as a human being,” Carrie says, “but this one really was visceral for me. I was like, we're doing something. And for some reason, people made it into a big deal. The responses to it and the coverage from it, I think, were a bigger comment on the cannabis industry. I think cannabis companies are expected to comment on addressing the problems from failed policies because it's in our wheelhouse, but when we go outside of that wheelhouse and we make comments on other things in the world, we're expected to stay in our lane. Obviously, we have to admit there's a disparity.”

Carrie gestured at the space around us and said, “We are allowed to do this when other people are sitting in jail suffering for it. Cannabis is a business like every other, and we have a platform where we can discuss a number of topics. There's a lot there to think about and we want to participate more. We're very committed as we grow, to giving people opportunities within our organization. I think that's a good place to start because you're starting with individual human beings. I think that's really key. I'm very aware of it. Our team is little, but it's pretty cool and diverse. The social responsibility is an ongoing conversation.”

A moment of meditative quiet followed as the sentiment settled in. We took a breath and spent a few more minutes gushing over our favorite chefs and restaurants. Before long, I was shaking Carrie’s hand and thanking her for her time, but before I could leave, she filled my bag with Leif Goods chocolate bars, Junk confections, and a few of their newly launched, hemp-derived CBD chocolate bars from Greater Goods. I wouldn't have thought it possible, but I began to feel an even deeper affinity for Ms. Solomon (and by extension, her hubby/biz partner, Jody). The tapestry they have wrought upon Oregon’s cannabis industry is more nuanced and ethereal than I could have imagined, and real-talk, I couldn’t wait to pour those Junk Dynamites directly into my mouth.

For more info about Leif Goods' products, be sure to check out my reviews of their Peanut Butter and Jelly Bar and Juicy Watermelon Dynamites.