After visiting Amsterdam in his teens, Oliver Higgins became enamored with cannabis—both the plant and its casual inclusion in the city’s culture. Higgins started growing cannabis in his mother’s Brentwood, Los Angeles garage, and when California legalized recreational cannabis ten years later, he decided it was time to create a company that would pay homage to the first cannabis culture he fell in love with.

Now, Higgs employs a handful of individuals and focuses on pre-rolled indica and sativa joints. On a sunny afternoon in the LA neighborhood of Silverlake, I met up with Higgins to discuss his relationship with cannabis, why he switched from growing indoors to outdoor cultivation, and how he created beautiful yet functional packaging. This is his story as told to Proper.

I started loving cannabis when I visited Amsterdam. That pairing of cannabis and food and coffee—it was a lifestyle. You can go to the Van Gogh museum high. You could have a cold glass of orange juice on the street and look at people. So what I want with Higgs is that particular feeling of cannabis as part of a lifestyle. I want you to feel what it used to be like to get high with your friends and do things. That’s why I created a recreational product because I believe cannabis is a recreational product. You want to pair it with all the other things you want to do in life, whether that’s sitting and watching a movie or going surfing or skiing. 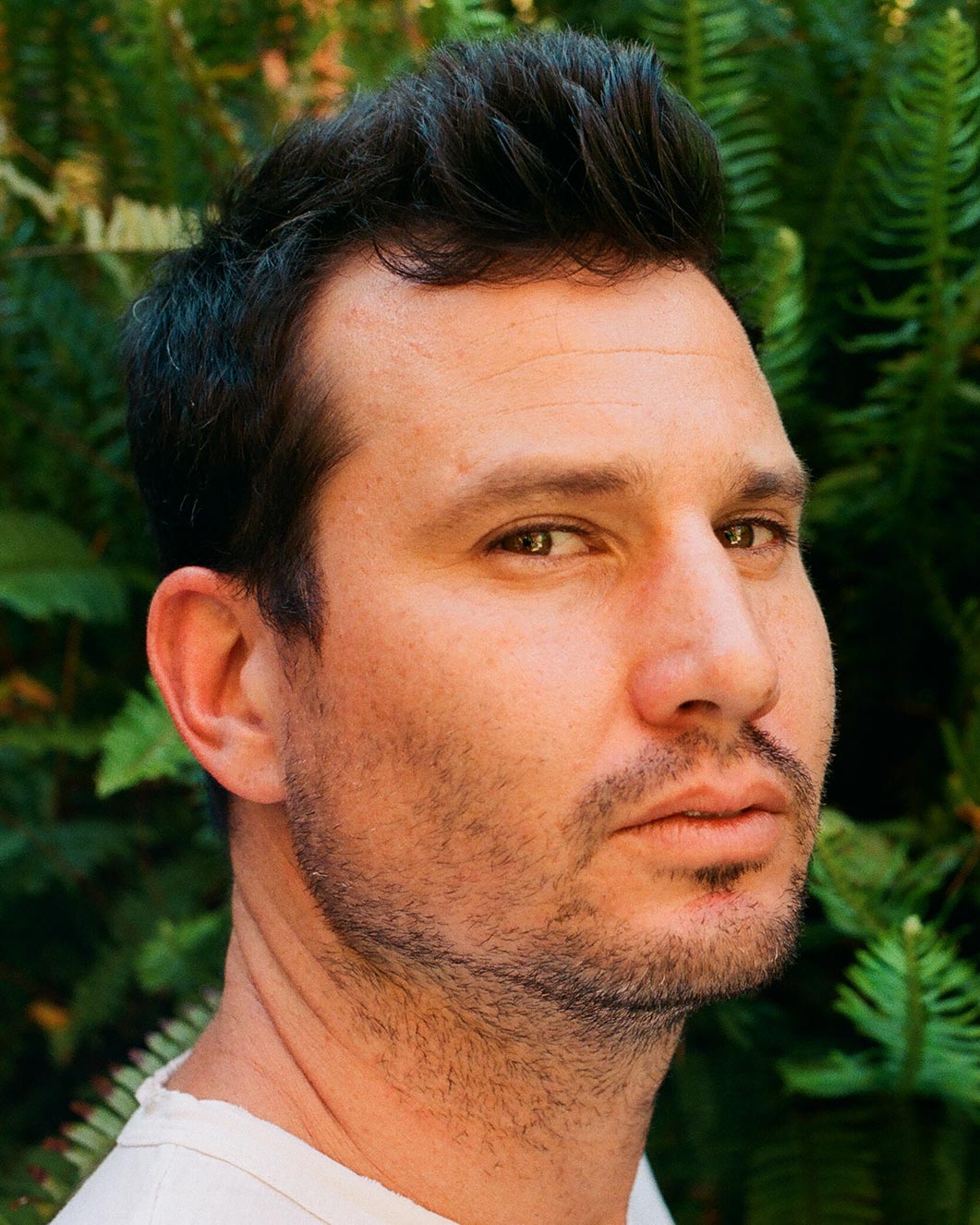 To do that, we grow our flower at Honeydew Farms in Humboldt. I think when we were allowed to transition to growing outside, we found the full power of the sun. The sun here is why 90% of the world’s agriculture is grown in California and shipped elsewhere. I think outdoor growing is a little cleaner and allows for a more natural-feeling high, which is important for Higgs because I don’t want it to be a knock-your-socks-off kind of cannabis. I want you to be able to go do all the other things, so whether you’re a novice or an advanced smoker, you’re still going to get high. I just think for the everyday smoker—which is who I want Higgs to be for—it’s something that’s a little cleaner, a little lighter. That’s all you need sometimes.

On Smoking At Work

The Higgs White pack is very, very similar to what I’d like to smoke every day: a strain called Green Crack. Higgs just started selling in Colorado, and while it’s impossible to get the same genetics across states, I always want that White pack to be the same feeling whether or not you have knowledge of cannabis strains. I’m the final tester of all this cannabis, so what goes into every pack I test and I approve. So, yeah, I went to Colorado to smoke weed for work. [Laughs]

On Questioning Indica vs. Sativa

Honestly, I thought the cannabis industry was going to be at a place where I didn’t have to put sativa or indica on the packaging, where you could pick up our White pack and know it was going to be for energy, focus, and euphoria. It’s basically giving you a definition of sativa rather than calling it that. But I think we’re going to put those labels on the box soon because people have asked for it and we’re all about giving the customer what they want.

That said, most people still don’t know the difference between the two and to be honest, a lot of that stuff is misguided. What I learned from indoor growing is that everyone fakes strain names. There are only a few actual strains that have any meaning and those are sativa and indica. Everything else is just a hybrid between those two worlds. Whatever people are pushing, it’s not the truth. 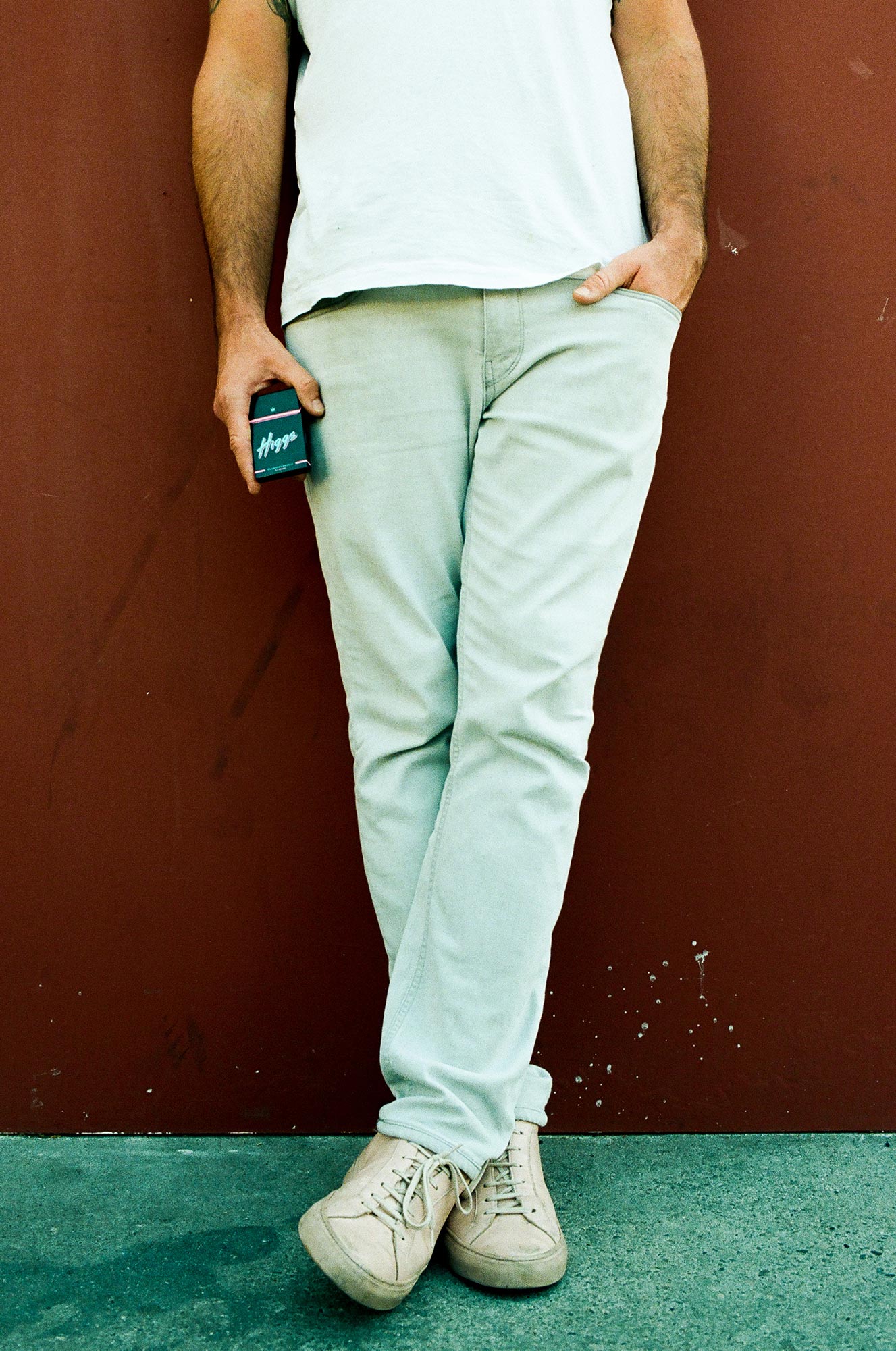 On Building That ‘90s Aesthetic

Funny enough, even though everyone says our brand aesthetic is Miami Vice, it’s not ‘80s to me at all. The colors are actually very early ‘90s. They’re very Andre Agassi, early Nike of the ‘90s. For me, it was just creating something that was both cool and unisex, which I think the pink and blue accomplish. It leans feminine but it’s not too feminine. Any man will feel comfortable with that pack. I built the prototype for the box by hand with an X-Acto knife and superglue and paper from the art store. I probably built 30 or 40 of those in different thicknesses. I wanted the box to fit in my pocket. I brought the prototype to a Rams game and it rained. It poured on us and the structural integrity of the pack lasted. So I was like cool, that’s going to be it.

We’re creating a hybrid pack in grey, a private reserve pack, a CBD pack, and a hemp CBD pack for other markets that don’t allow recreational THC right now. Then we’re also creating disposable vapes all along the same color line—black, white, and grey. We’re also going to do a pink pack that will be a 1:1 THC:CBD. So far, we’re only doing smokables (AKA no edibles, tinctures, etc.), but that may change when we’re more mature of a brand. 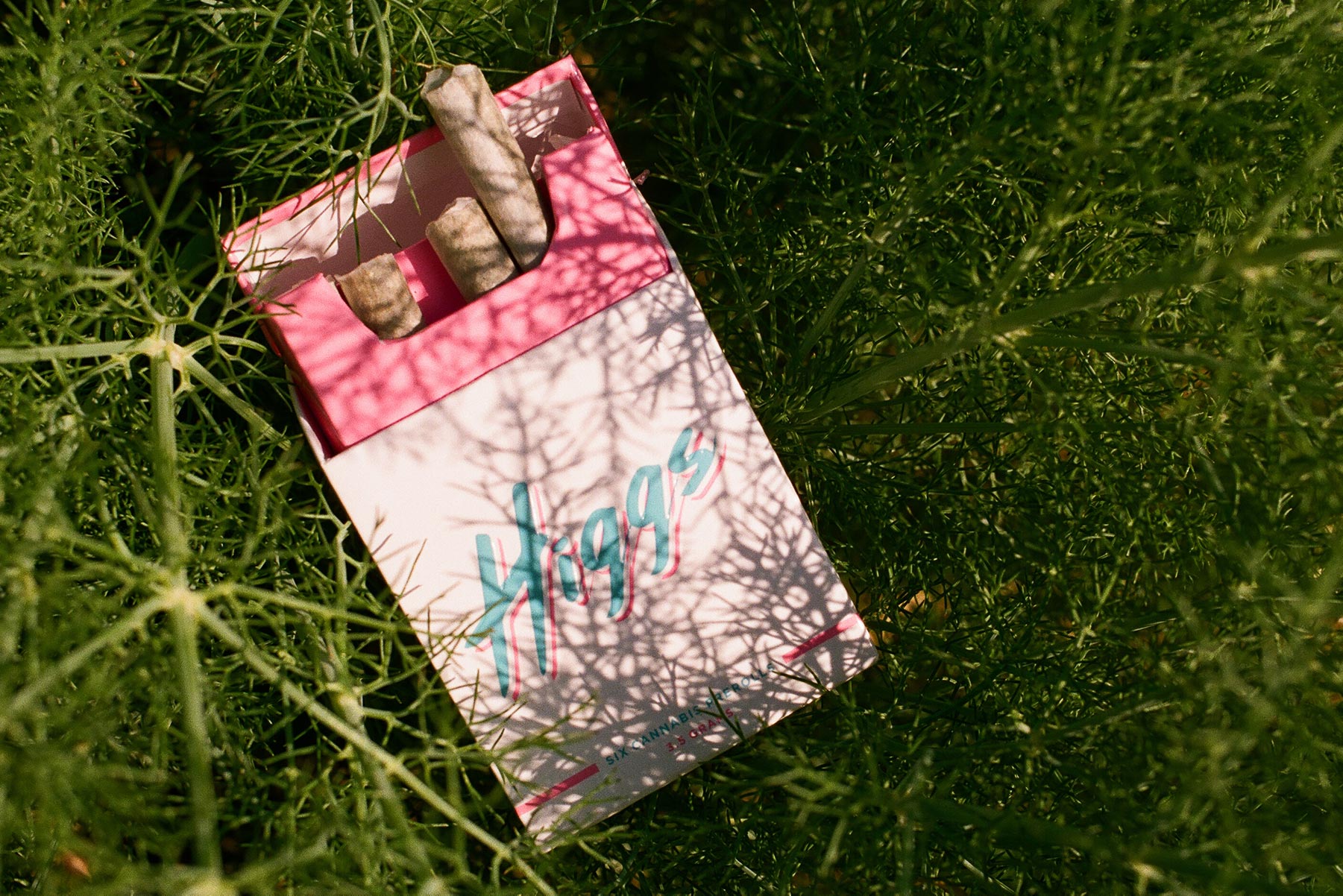 The Higgs team is a very diverse team, even with just four people. Obviously, everyone should be let out of prison who was convicted of any sort of crime that isn’t considered a crime anymore in those places. Higgs is not big enough to do much of anything on a level that would be meaningful at this point, but I guess for me, I’m here to make the world a better place now, which looks like full inclusion. I’m here to help the future. I'm a struggling startup trying to get my own product off the ground and that’s my focus. Keeping people employed by me, people of color, people of Asian descent—those are the people I’m trying to take care of and empower to do greater things.

Emily Berkey is a freelance journalist and photographer from Portland currently living in Los Angeles. She writes about and takes photos of musicians, artists, and creatives from an intimate perspective. Emily exclusively uses 35mm and Polaroid film.