The Difference Between Wax, Shatter, Crumble, And Other Cannabis Concentrates

Concentrates have all kinds of labels. Here's what they actually mean.

Concentrated cannabis is as old as recorded history; in fact, it’s highly probable all of our ancestors were soaking hemp in alcohol or oil and anointing each other like the prehistoric stoners they were. Just like in biblical times, many recreational enthusiasts and medicinal users alike prefer concentrated products over flower. But in 2019, we’ve moved beyond the oil vs. alcohol dichotomy. Today, it’s the post-extraction processing that differentiates most concentrated cannabis products. Post-extraction processing is what gives budder its rich, fatty consistency, sugar its delicate, honey-colored grains, and crumble its sticky, cakey morsels. If you’ve ever been unsure of the differences between these concentrates, you’ve come to the right place.

All cannabis extracts are created either with or without solvents. Solvents like butane and ethanol, as well as the solventless CO2 and heat/pressure extraction methods, have led to significant breakthroughs in how we concentrate cannabis. But it’s what happens after all this processing that significantly affects the texture and how easily we consume the product as a result. Classic stoner vernacular can make keeping track of what's what a pain to say the least. So allow me to break down the common dab types and what sets each of them apart from their shelf-mates. 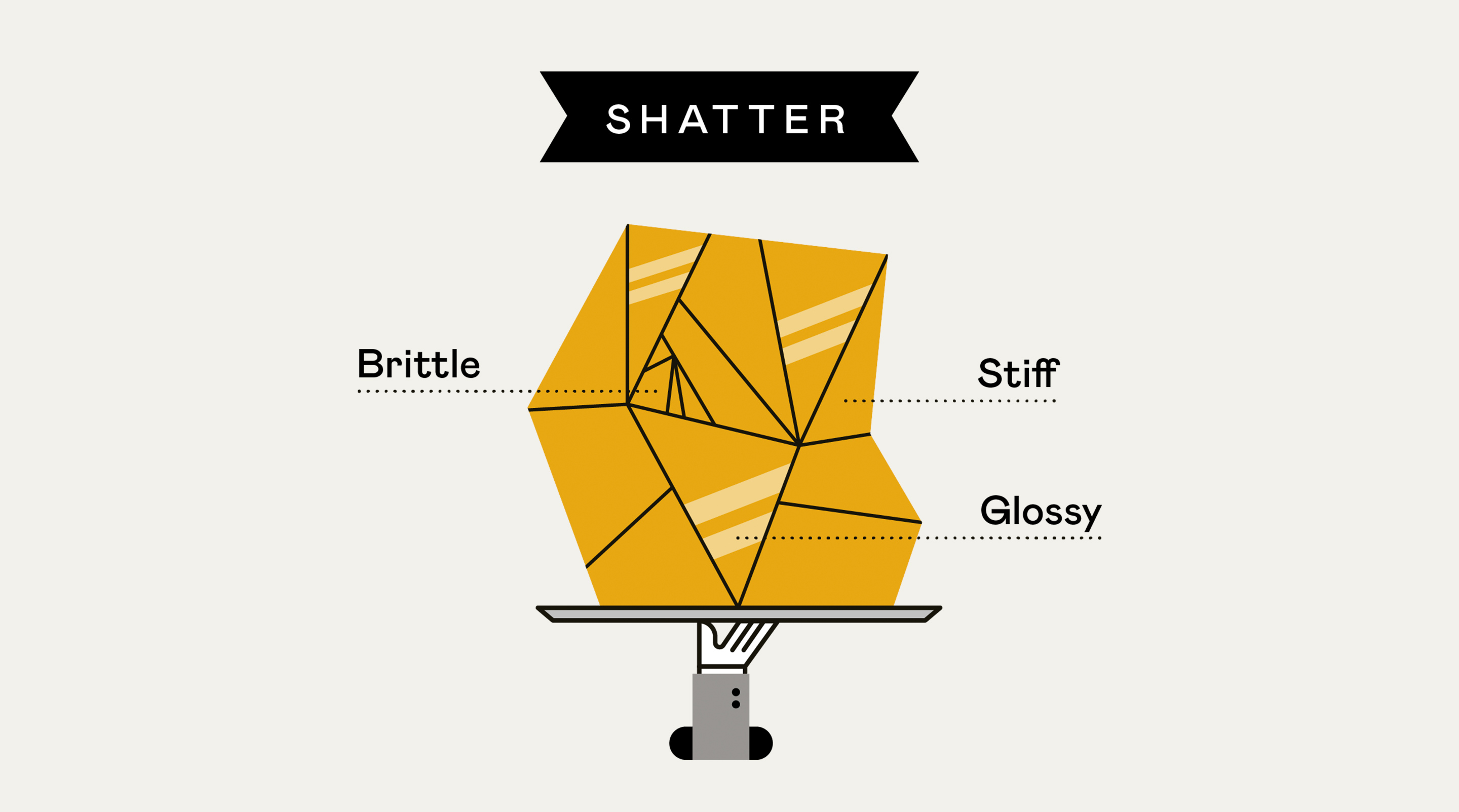 Alternatively known as “pull and snap” or “taffy,” this butane-extracted concentrate has the glossy, stiff texture of quickly cooled molten glass, hence the clever moniker. While other concentrates are defined by the agitation they sustain during extraction, shatter is distinguished not by agitation, but rather how it’s cooled. It involves a lengthy purge, heat, cool, repeat process (of at least 48 hours) that transforms the sticky resinous oil into the brittle dab we know and love.

Pro: BHO extractions can produce THC percentages of up to 99%. Can you believe?!

Con: The looming possibility of residual solvent plus shatter’s brittle nature can make dosing a bit more complicated than it would be if it had a more forgiving texture. With especially brittle shatter, dosing can feel like a cross between a math problem and a jigsaw puzzle, so approach this type of dab with caution. 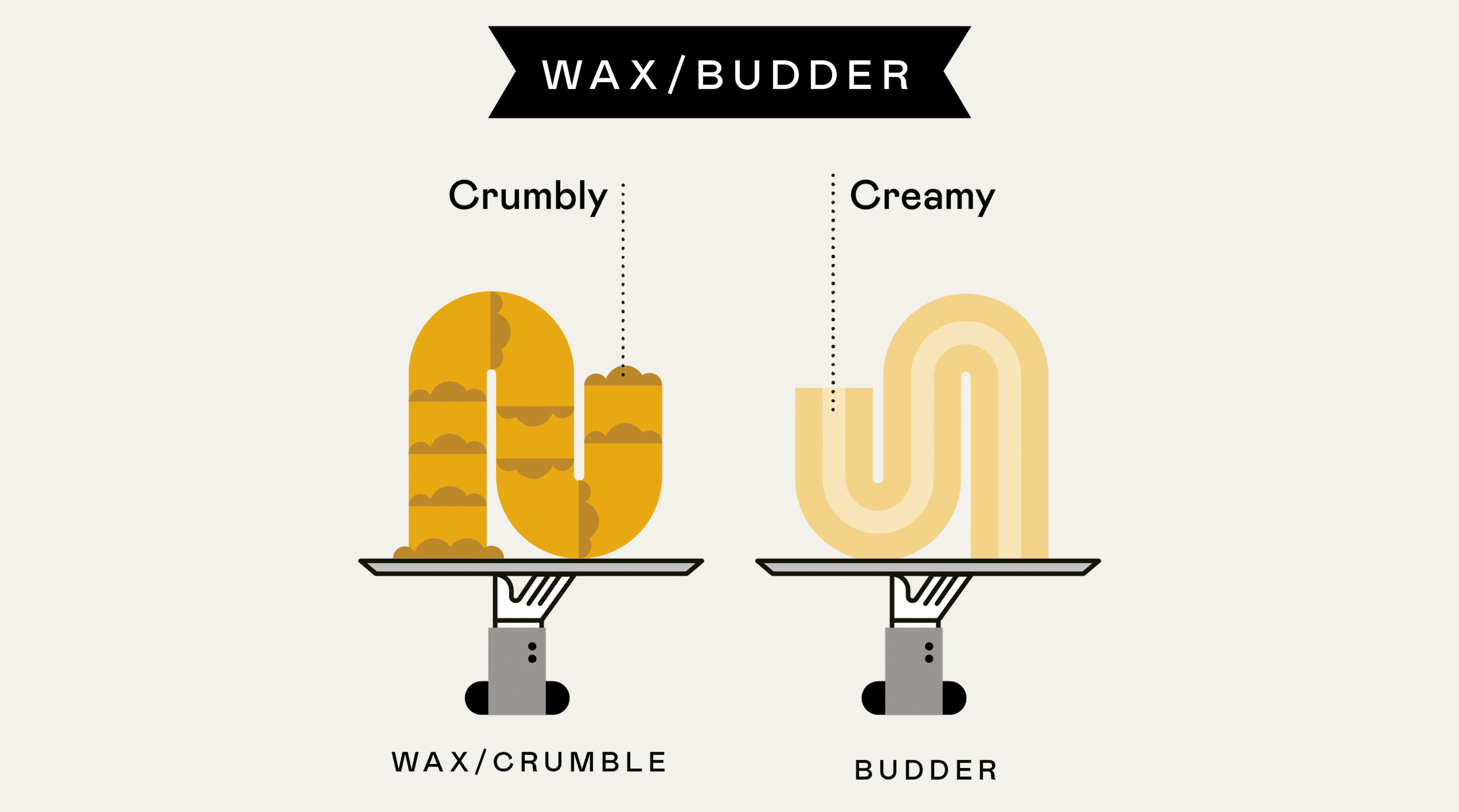 Alternatively referred to as badder, batter or crumble, the creamy, moldable textures of wax and budder are the result of a whipping process that incorporates air while evaporating residual solvent. An aggressive whipping will result in a drier, more crumbly wax, while an abbreviated, less intensive whip will result in a creamy budder. Waxes and budders can have percentages, perfumes, and flavor profiles identical to shatter or oil, meaning the only significant difference is their malleable texture.

Pro: Waxes and budders are easily manipulated onto a dab tool, making dosing simple, straightforward, and perfect for novice dabbers building up their dab clout.

Con: This pliable dab type is quick to melt, so make sure your dab tool is at a low room temperature before you attempt to pick up wax or budder with it. 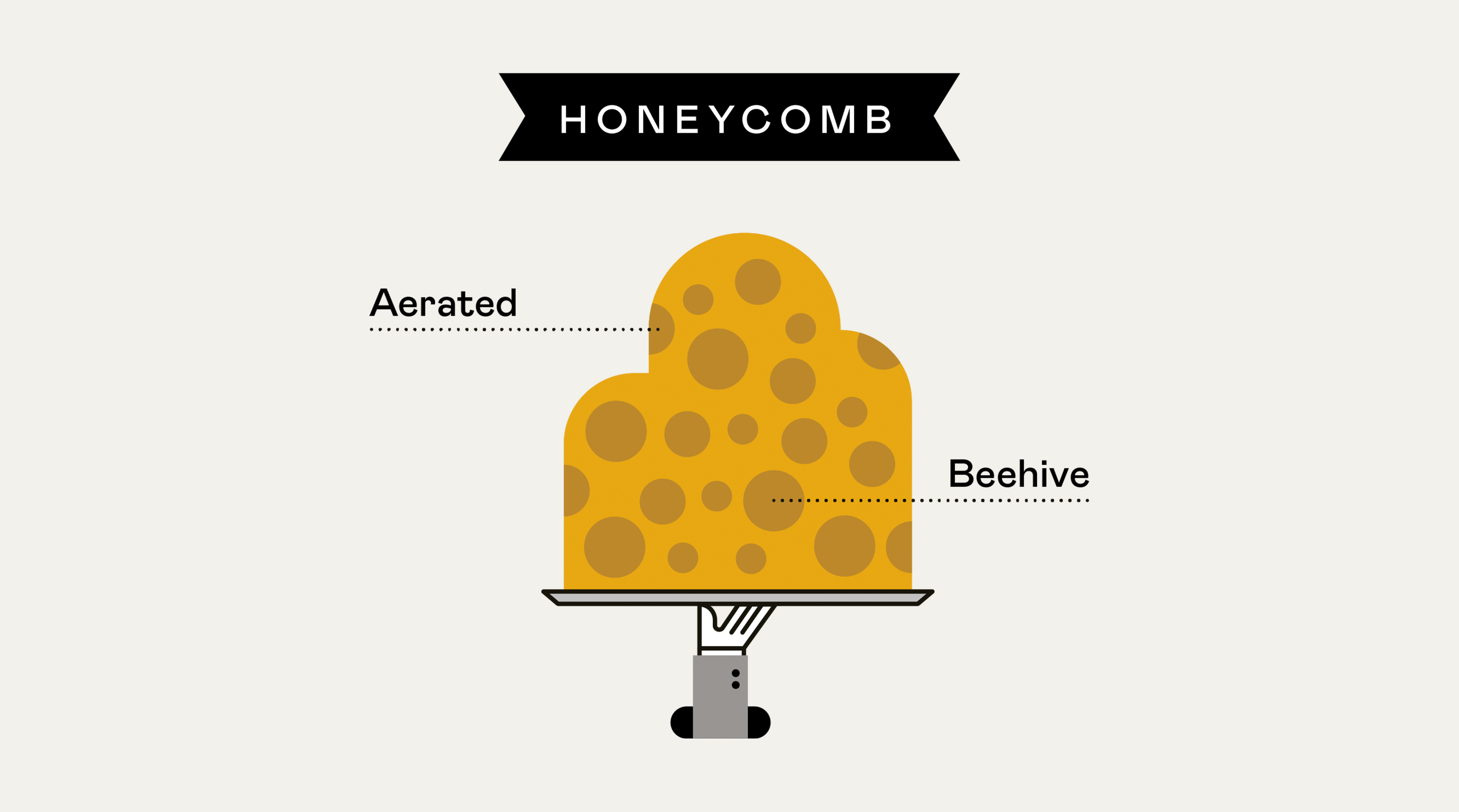 Alternatively known as "pie crust" and occasionally crumble, honeycomb has an aerated texture reminiscent of an actual beehive. Creating honeycomb requires a complex series of post-extraction actions; the raw, freshly extracted slurry is gathered, spread out onto parchment paper, vacuum purged, and then pressed to promote nucleation. To save you a Google trip, nucleation happens when matter enters a new thermodynamic phase and rearranges its structure. In this case, it’s the press that impels the extract to reorganize itself in the familiar honeycomb formation.

Pro: It looks like an actual chunk of a beehive and that is very cool.

Con: Honeycomb can either be tight and brittle-like shatter or soft and pliable like actual beeswax. There is no established cornerstone of viscosity, which means there can be a lot of variability product to product.

My top pick: From the Soil's Alien Orange Cookies Crumble 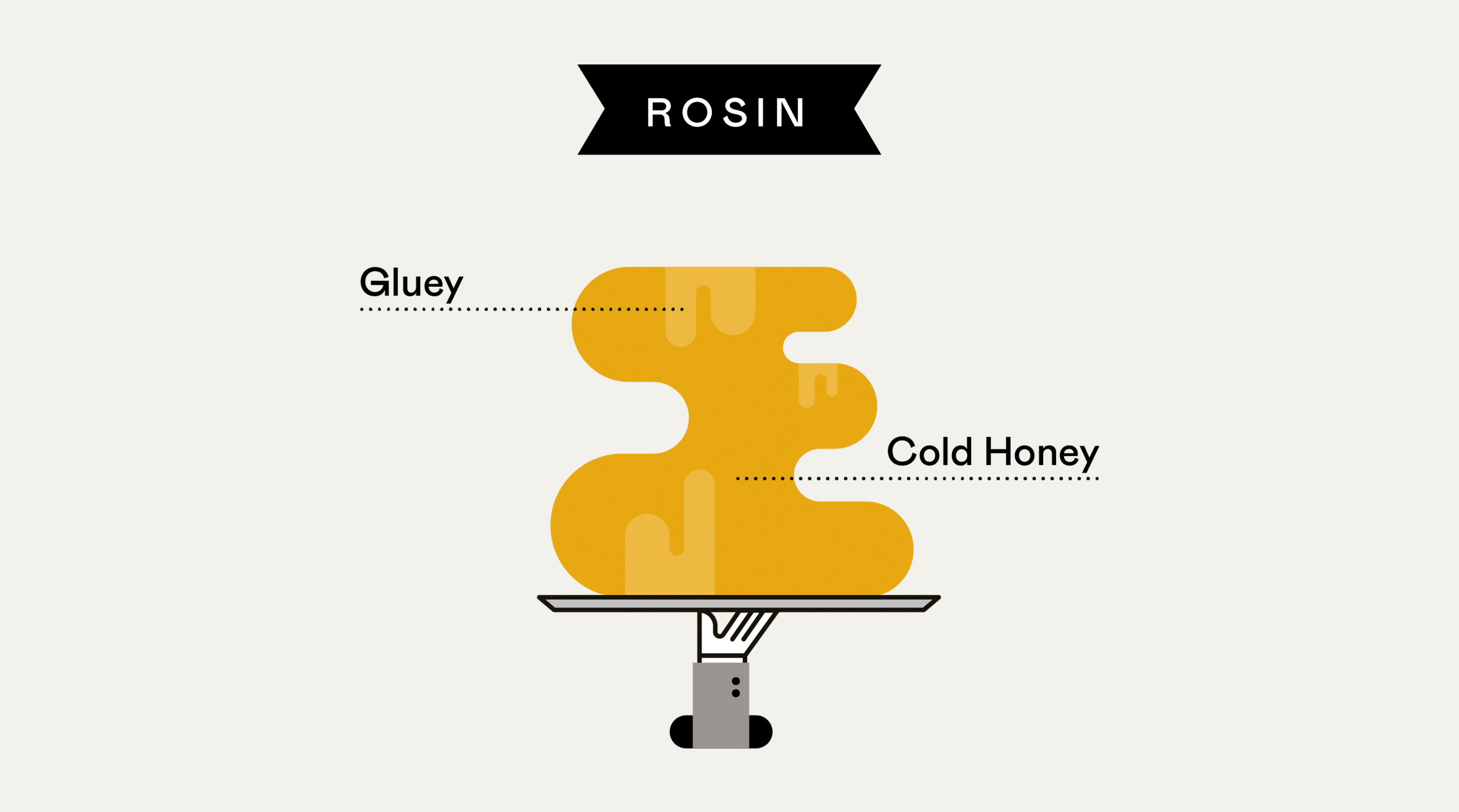 Alternatively referred to as “live resin,” nothing but pressure and heat create this solventless extract, giving rosins a rich golden oil and the texture of cold honey. This texture happens to be perfect for both dabbing and vaping. Rosin has no post-extraction processing, so the product is the literal result of squeezing the essential oils from dried flowers, typically via a hydraulic press. Rosin is mostly indistinguishable from butane extractions but without the possibility of lingering solvent.

Pro: Rosin’s gluey texture makes it easy to manipulate with a dab tool.

Con: Rosin can be marginally more expensive than solvent-based extractions. 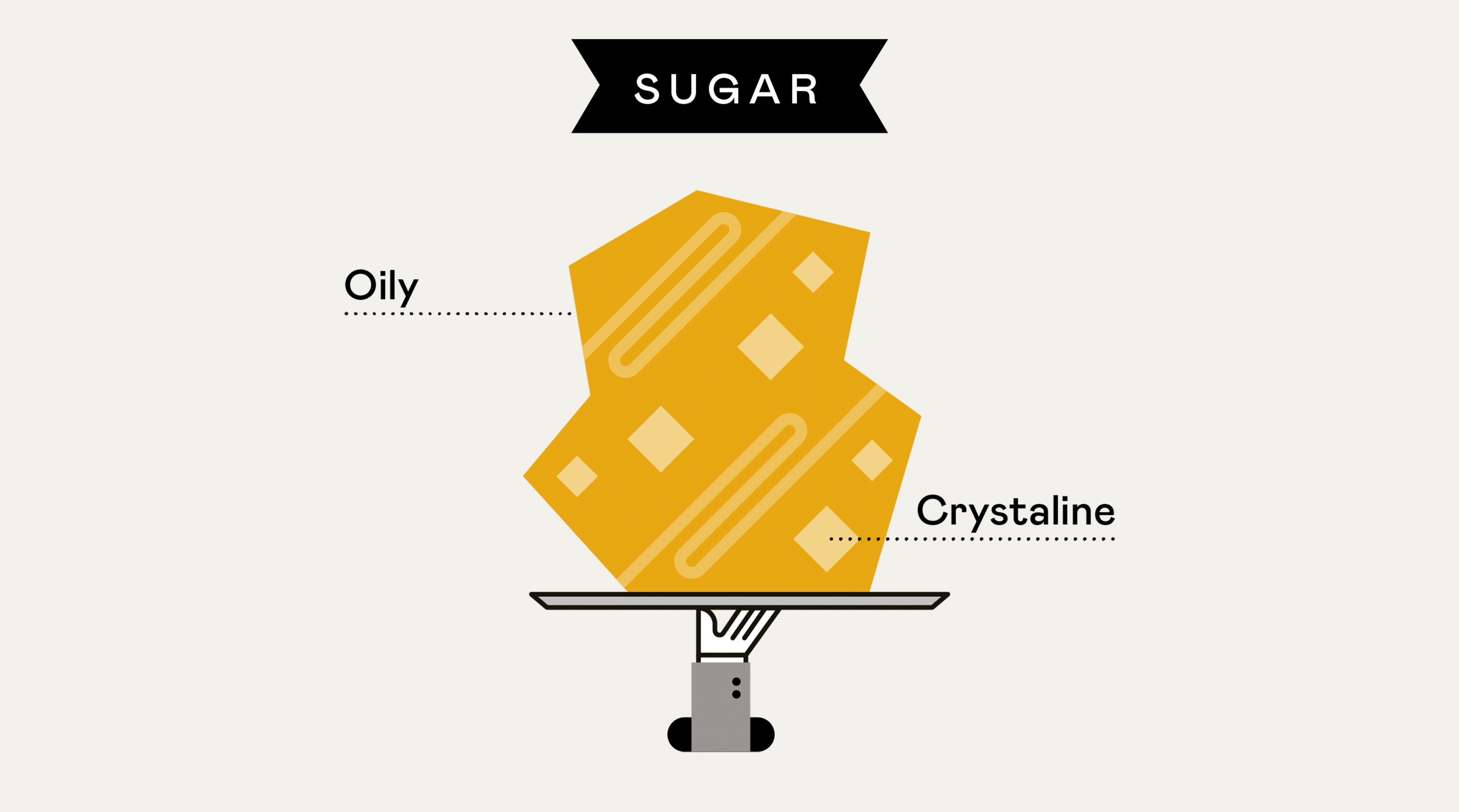 Alternatively known as “oil” or “sugar oil,” this honey-colored concentrate glitters with crystalline granules. Some look at these granules and assume spoilage or an improper storage issue while others wouldn’t dab anything else, but in any case, sugar is really just another nucleated concentrate. Sugaring occurs when strains with higher fat contents or hydrophilic terpenes begin to separate from the cannabinoids during the extraction process. As the trichomes attempt to return to their original state, they take on the character of glistening sugar granules coated in warm honey.

Pro: Improper storage can cause shatters and budders to “sugar up.” Dispensaries then sell them at a discount, despite the fact that sugaring does not affect potency or quality.

Con: Collecting sugar on the head of a dab tool can be tricky, especially if the product is particularly loose and oily.

It’s important to remember that regardless of the post-extraction processes, each of these final products will retain the same potency they had after they were initially extracted. The same batch of freshly expressed cannabis oil could make shatter, budder, honeycomb, and sugar. Though each would be singular in its own way, they would retain the same percentages of cannabinoids, as well as the same essential flavors and perfumes established during extraction.

What truly differentiates each of these dabs, then? Aesthetics and ease of use. So, whether you’re all about honeycomb or strictly a sugar baby, accurate dosing is far more critical than what your concentrate looks like. My advice is to start with the equivalent of a single grain of rice or less if you’re unsure how your body will respond to a new concentrate. Start small and slow and you can’t go wrong no matter which dab you choose.

Be sure to check out all of our top-rated shatter, wax, and rosin.