What The Hell Are Sublinguals And How Do They Work?

Before you go putting anything under your tongue, get these facts straight.

Most simply put, sublinguals are edible products administered under your tongue. The clue is in the name: sub, meaning below, and lingual, relating to the tongue. Whether they come in the form of tablets, tinctures, sprays, or strips, doctors have been using sublingual "vehicles" for decades because they help doctors expedite the medicinal delivery process and administer medicine to patients who have a hard time swallowing. Thanks to the high concentration of capillaries (AKA tiny blood vessels) found under our tongues, medicine is able to enter the bloodstream quickly and deliver benefits that much more effectively.

“Sublinguals enter your bloodstream rapidly, delivering effects in as little as 15 minutes.”

Sublingual cannabis consumption—both recreational and medicinal—is great for many of the same reasons doctors use them. When dissolved under your tongue, weedy tablets like LEVEL’s Elevate Tablinguals will bypass your digestive system and enter your bloodstream directly. This is different from a traditional edible that has to pass through your stomach before releasing cannabinoids into your bloodstream, meaning it could be hours before you feel anything. Sublinguals, on the other hand, enter your bloodstream rapidly, delivering effects in as little as 15 minutes. Dr. Glenn Harrison, an internist at Empower Clinics, confirmed this, telling Proper, “The oral cavity is extremely vascular. And because cannabinoids are so lipophilic, or fat-based, they have opportunities to slip right through the cells and enter into the bloodstream pretty quickly.”

If it’s all about feeling the effects as quickly as possible, why not just smoke or vaporize cannabis? Besides the obvious benefit of leaving your lungs out of the equation, they offer a happy middle ground when it comes to both the onset and duration of effects. “When you look at the route of administration, taking it in through the lungs is the fastest route,” says Dr. Harrison. “But if it’s fast in, it’s fast out. Tinctures [and other sublinguals] are probably the second fastest because they enter the bloodstream with the next-fastest rapidity and then linger in your system a little bit longer.” In this sense, sublinguals are like the Goldilocks of consumption methods; they won’t kick in instantly, but they won’t ditch you like a fleeting thought either. 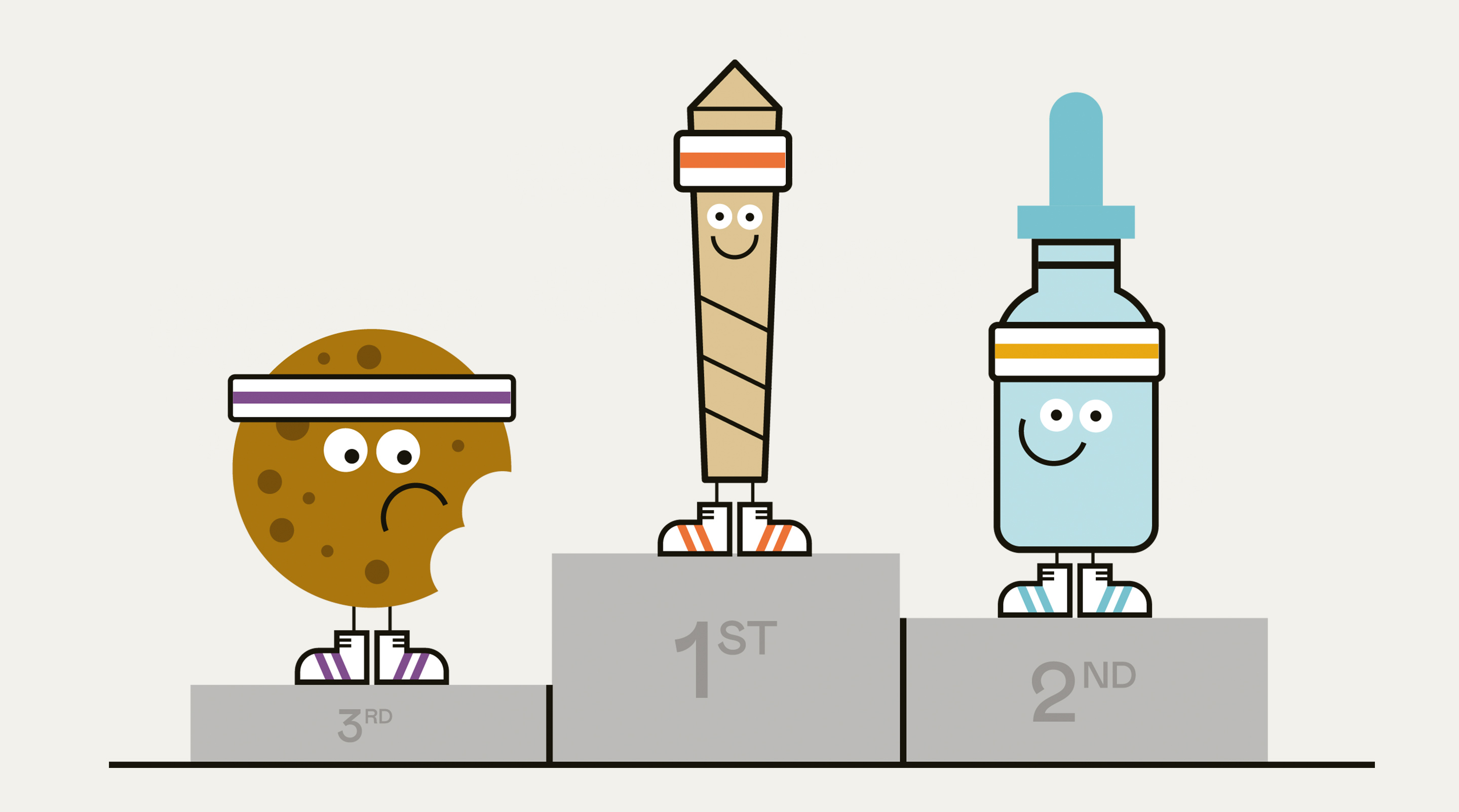 Not to knock traditional edibles (I love gummies as much as the next person), but sublinguals also help users avoid many of the variables introduced by our finicky human digestive systems. What you eat before or after consuming an edible can impact how you absorb the cannabinoids in said edible. As a real-world example, I once ate a Breez Cinnamon 1:1 Mint containing 5mg each of THC and CBD on an empty stomach and within an hour felt a very subtle, relaxed high. The very next day, I took the same mint and got supremely high two hours later. The only difference? I ate a high-fat meal of fries and ice cream (healthy, I know) immediately after eating the mint. Had I dissolved that mint under my tongue instead of swallowing it, the experiences would’ve been more consistent. Sublinguals effectively cut out the middleman and deliver those compounds with less fuss.

“Sublinguals effectively cut out the middleman and deliver those compounds with less fuss.”

OK, so now you’re an expert on how sublinguals work. How do you go about finding the right kind of sublingual products to suit your needs?

First ask yourself if you mind consuming alcohol, even in tiny amounts. If the answer is a resounding no, then you might want to pass on certain tinctures that use highly concentrated alcohol to extract all the best parts of the plant. For low-dose users, this might not be a problem since you’ll likely only be consuming a few drops at a time. Those who require higher doses might have to consume more alcohol depending on the concentration of the tincture. At the very least, do some research when shopping for tinctures because some brands use glycerin (an alcohol-free and mildly sweet, vegetable-based solvent) or coconut oil to make their extracts. Papa & Barkley's 3:1 THC:CBD Releaf Tincture is one example of a tincture that uses coconut oil as the solvent to great effect.

One crucial tip with tinctures: Make sure to keep them under your tongue for at least 20 seconds. The same goes for sprays. Otherwise, you run the risk of ingesting them like regular edibles and feeling tempted to consume more when the effects don’t kick in as quickly. I made that very mistake while watching the movie Coco in theaters, and let me tell you, it was not the experience I’d signed up for. About an hour in, the visuals were too neon for my taste, so I reached to take off my 3D glasses. Friends, it was not a 3D movie. 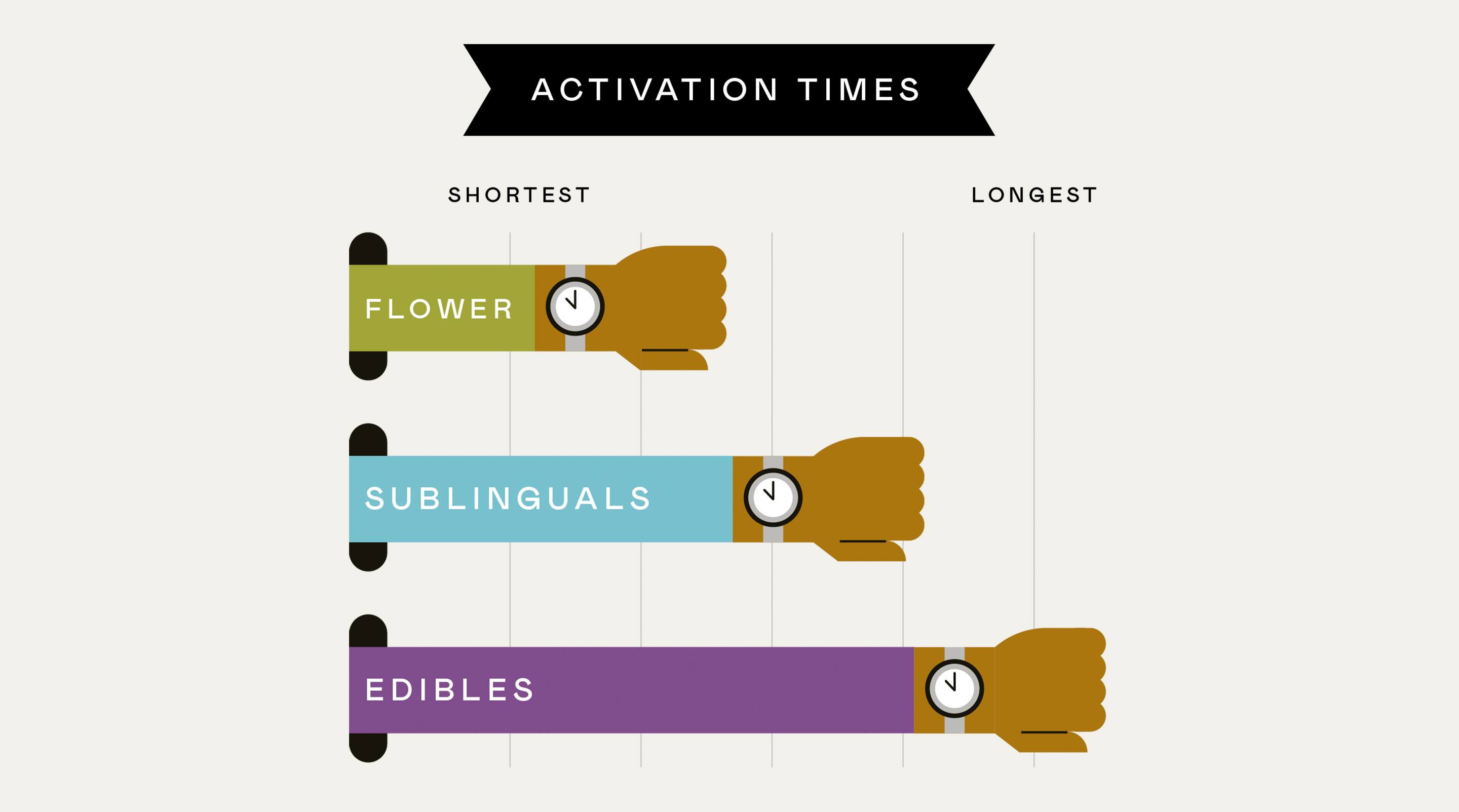 As mentioned above, the types of sublinguals don’t begin and end with tinctures. The Breez mints I’m so fond of can be administered sublingually as long as you have the patience to let them dissolve completely under your tongue. The same goes for small candies, pastilles, tablets, and strips. Kin Slips are specifically designed to dissolve under your tongue rapidly. For example, PCC rater Norma Kwee loved the calming effects of the Park Life slips. “My overall anxiety was noticeably subdued,” she wrote in her review of the CBD-rich slips. “Throughout a long day of walking, I managed to feel not just alright, but good.”

As with any new cannabis product you’re trying for the first time, start with a low dose and work your way up. Especially if you’re brand new to edibles, try a dose of 5mg of THC or less and wait a full two hours before taking any more. You might not feel anything with such a low initial dose, but do yourself a favor and learn from my cavalier mistakes; it’s better to discover your limit from the bottom up than the top down. Knowing your perfect dose is a little bit like getting to know yourself. Once you figure out that magic number, the possibilities are endless.

Check out all of our top-rated sublinguals here.