Ranked 5 of 198 in Concentrates for feeling Euphoric. 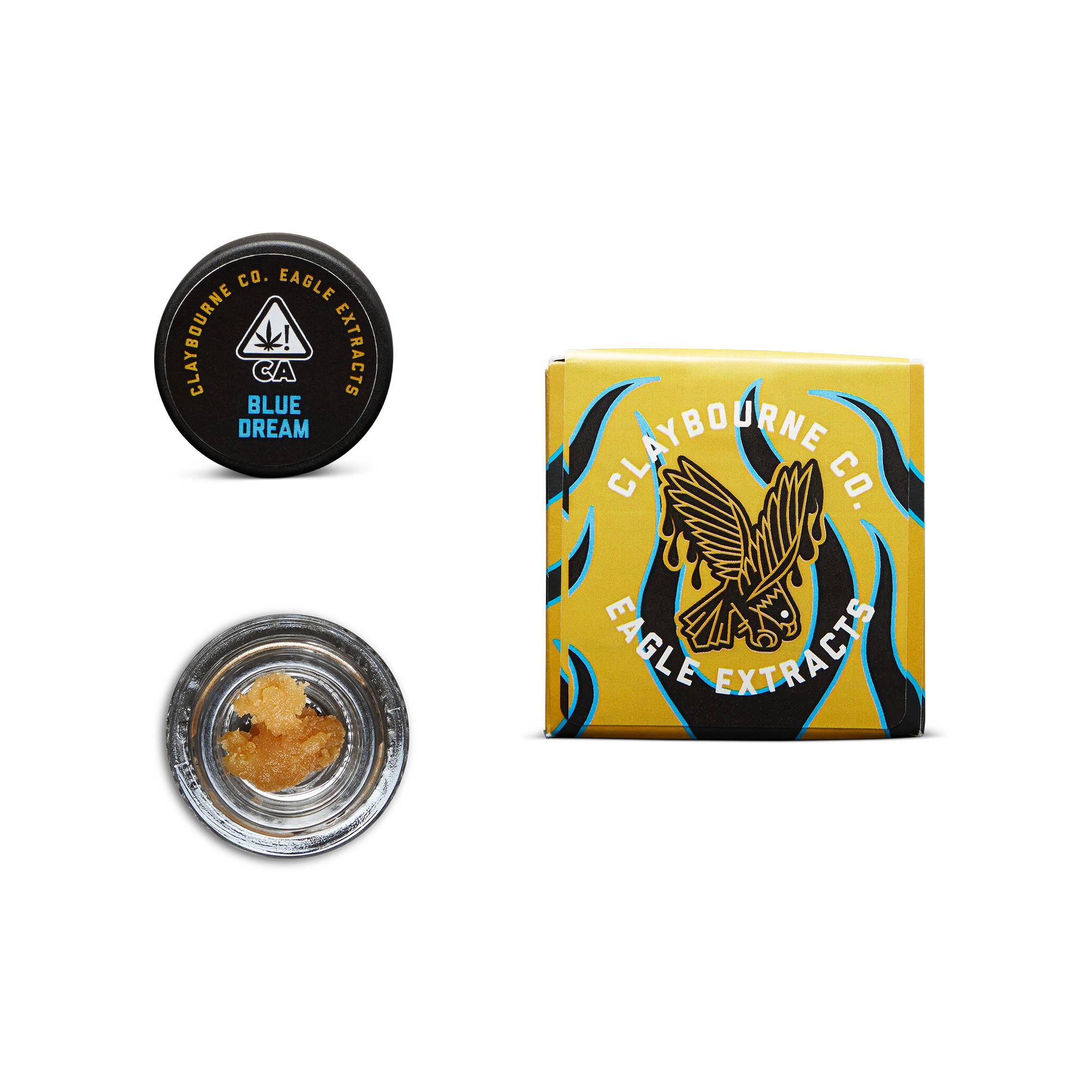 As our committee rates Blue Dream Budder, we capture their experience in real time through our ratings app and report everything back here.

Ranked 5 of 198 in Concentrates for feeling Euphoric.

This is a clear headed high that is bringing the joy on all fronts. Also good for household chores. Just cleaned my car of all things.

This Blue Dream Budder from Claybourne Co. is a go-to for pain relief and parties.

In Review: Getting a top-tier score from the PCC, Claybourne’s Eagle Extracts Blue Dream Sativa Budder might just be the perfect daytime high. It delivers heavy waves of euphoria and positive vibes that will slap a permanent smile on your face, while also leaving you feeling energetic, creative and amourous. Crafted with Claybourne’s premium indoor cannabis, this is one of the more potent versions of Blue Dream out there coming in at 91% THC, and the primo berry-forward flavor profile and potent effects make every dab an utter delight.

Having suffered what appeared at first to be a broken toe in jiu jitsu class, I was looking for something to dull the pain and help me walk without wincing. I took a good sized dollop of this Blue Dream budder from Claybourne Co., and damn near vaped myself into another dimension. Not only did my pain subside, but my entire sense of being seemed to subside right along with it.

It’s the equivalent of a full-body transplant, but instead of another body you just get a pulsating wave of joy and contentment. I felt like I was an amorphous cloud of energy rising above all my earthly problems. In other words, this 91.22%THC concentrate got me very, very high. This has to be the highest I have ever gotten off of the Blue Dream strain, and I have sampled it many times, in all of its many forms.

“I felt so captured by this potent euphoria that I had totally forgotten I was suffering any pain at all.”

As an analgesic this is top notch. I felt so captured by this potent euphoria that I had totally forgotten I was suffering any pain at all. Even high-tolerance smokers should be able to gain a bit of relief here. And as for the taste, it’s pure Blue Dream. It has bright notes of sweet berries, and the aftertaste lingers pleasantly onto the palette.

From the first hit, I was instantly catapulted into a state of far-ranging bliss. A place where insights seemed to seep from the ether, and petty obsessions that I’d been harboring were dissipating in real time. What was left was an openness that made connecting with others a more desirable experience. This, of course, includes the horizontal mambo. It adds that extra layer of electricity and derring-do that should earn you a gold star from your significant other.

The good times don’t stop there, however. This is simply a happiness inducing machine. I could find myself just sitting upright, staring out my window, and still be overcome with pure vibes. In fact, that’s exactly what I did. There was a moment there in the beginning where this high was starting to get away from me. Meaning that I was getting untethered. Like I said, I took a larger than usual amount on the count of my bum toe, and that turned out to be tantamount to a bazooka taking out an ant hill.

“As someone with a midrange tolerance, I considered this to be a powerful high.”

I was definitely going through some things. It wasn’t long before I was able to reign in the unraveled mind by getting into some deep breathing. This segued into a very mindful meditation session in which I just allowed myself to move with this high, instead of against it. There was a lot of mental aikido going on. What transpired was not only a deeper level of euphoria, but a deeper level of understanding. What started out as somewhat stormy seas transitioned into some profoundly clarifying moments. It was a real ride, to say the least.

As someone with a midrange tolerance, I considered this to be a powerful high. It is energizing, not so much in that I’m going to run a 25K sort of way, but energizing in the sense that if you have a creative inclination, this high may push you to start work on that project you’ve been putting off. It can also help you reconnect with those you love, and it can help you dive a little deeper within yourself.

It’s like a communication device that sifts through the bullshit that’s been accumulating inside your head so it can broadcast a sense of unerring beauty to a world that is not really separate from yourself. Ultimately, it has the ability to clean your mental slate, so that your true nature may shine a little brighter. Just practice a little bit of restraint when vaping this Blue Dream, or your true nature may get clobbered right out the gate, and take a few minutes of staring out the window to find its footing.

Be the first to review Blue Dream Budder from Claybourne Co. and help others find their high.