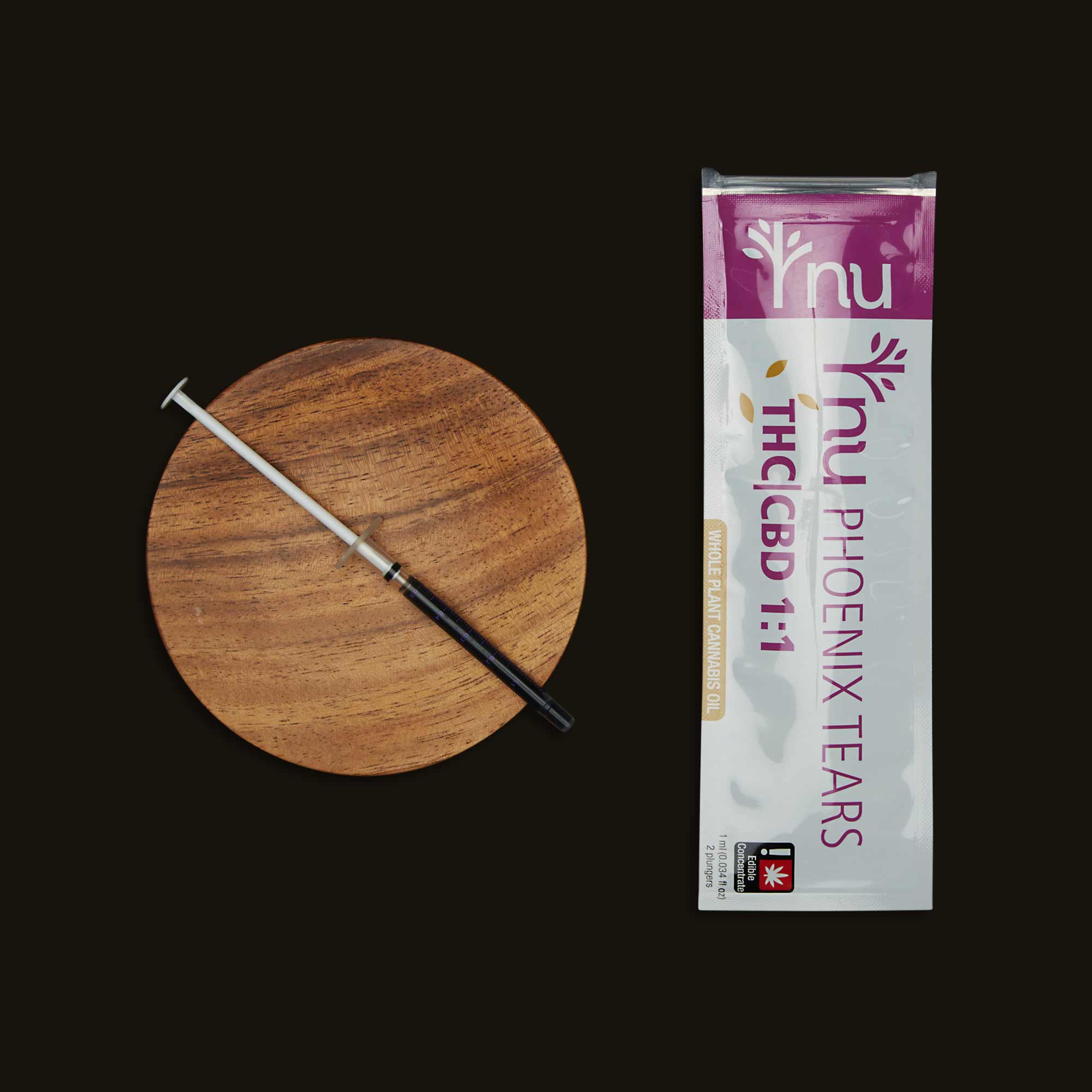 Nu's Phoenix Tears Plunger 1:1 is loaded with a balanced oil concentrate with a half and half CBD to THC ratio. It has an earthy flavor, and it typically produces an ideal Sunday morning high. You can expect a wave of calm that neautralizes any morning grog and settles you into your day off. Plan for video-gaming and couch-crashing in the blankets, but don't expect to retain your communication skills.

Ranked 50 of 94 in Concentrates for feeling Relaxed. 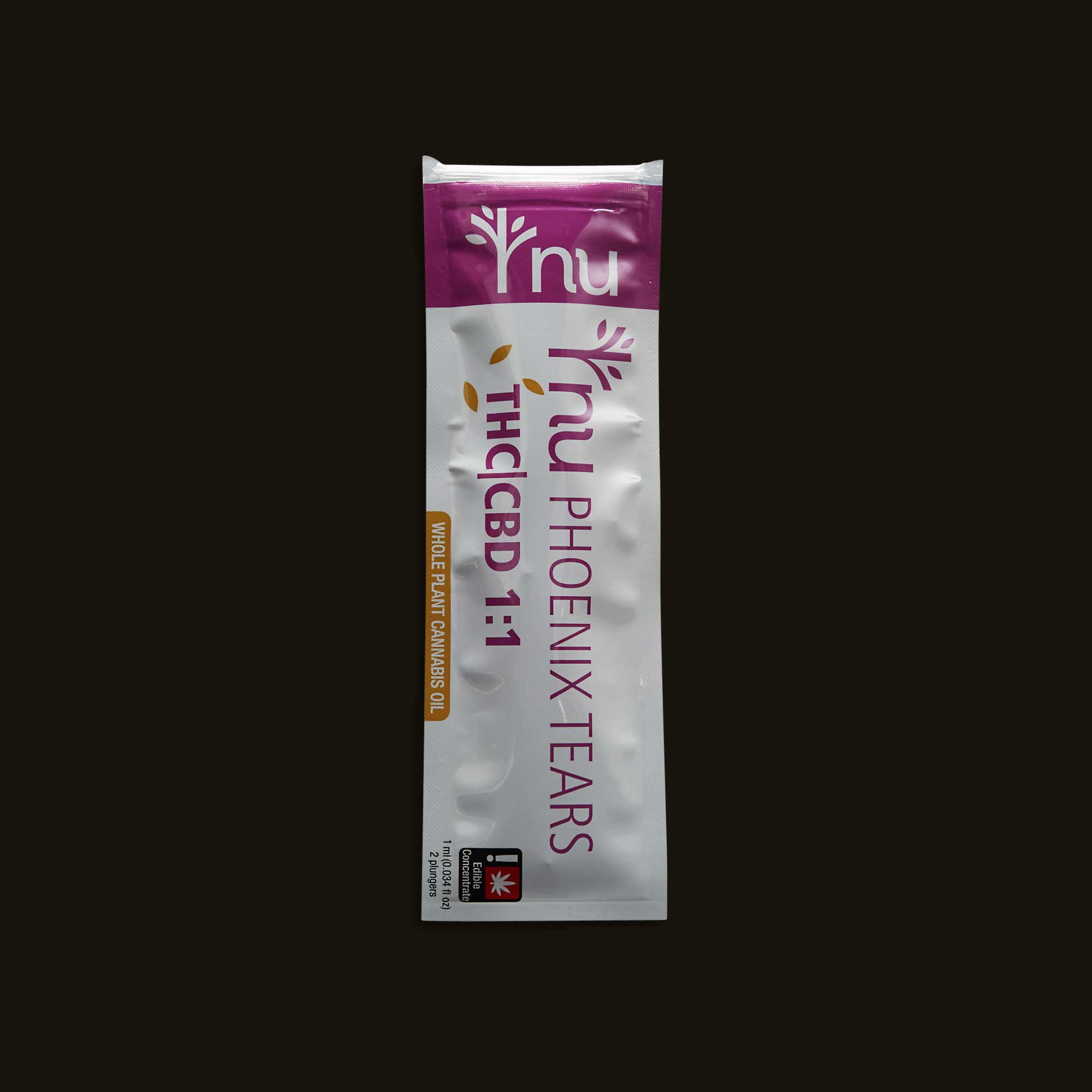 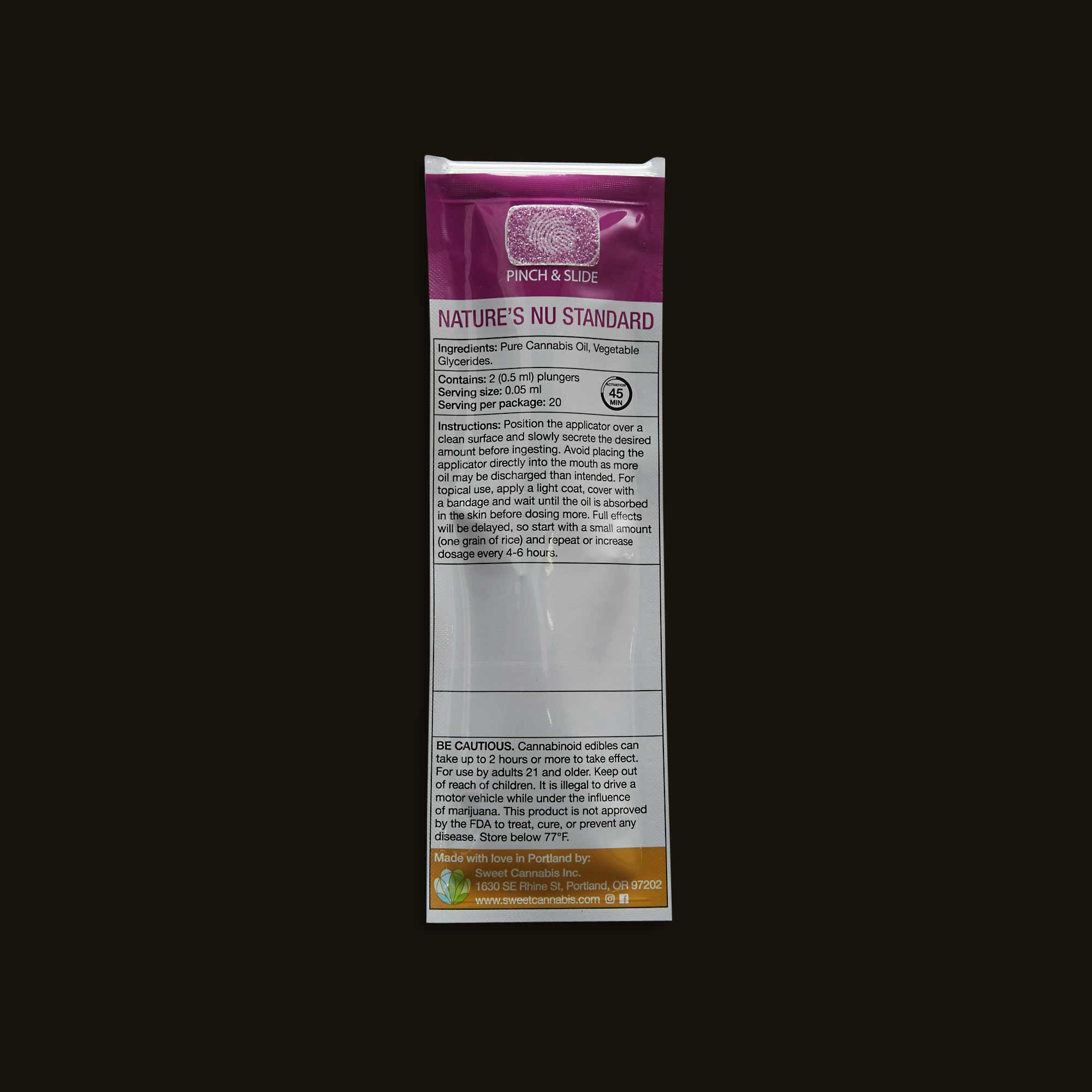 As our committee rates Phoenix Tears Plunger 1:1, we capture their experience in real time through our ratings app and report everything back here.

Ranked 50 of 94 in Concentrates for feeling Relaxed.

Lazy Sundays Are The Best Medicine

This concentrate got me exceptionally Sunday stoned and I'm not mad about it.

Looking at the sample-size glob of Nu’s 1:1 Phoenix Tears, a tar-black smear of oil in a container the size of a contact lens holder, I wondered how I was expected to use this. I settled on smoking it, but I could have taken it orally as well. While I can’t say how the oral experience of this high differs from the combustible variety, I can tell you everything I ascertained from smoking it.

A retail package of Nu’s Phoenix Tears contains two plungers, each containing 5ml of the inky concentrate. The balance of 14.9mg THC to 14.5mg CBD in each single ml dose is enough to transform an entire day. $40 will get you 20 servings of this transformative goo, which even looking back from the vantage point I have now, seems like a hell of a bargain.

“The first hit of this was bright, fresh, and floral.”

Upon initial inspection, I thought the perfume of this insidious-looking smear was reminiscent of bittersweet chocolate and balsamic vinegar reduced to a glaze. I definitely think this was a trick my eyes were playing on my nose, because the first hit of this was bright, fresh, and floral. It was like taking an open-mouth inhale of an English garden in full bloom—certainly not what I was expecting but a more welcome surprise I couldn't have asked for. The oil burned much like a small morsel of hash might. It smoldered for a while, slowly burning itself out between my two or three tokes.

The high was immediate and hugely gratifying. It was classically stoney, perfect for late brunch and an afternoon of video games. The head high was visibly dopey, so I took meaningful social interactions off the agenda for the afternoon. My eyelids hung low, and my conversation skills became limited to single-syllable affirmations, like yup and nah. Keeping track of the nuances of the high became an act of overachievement that even I, a seasoned show-off, could not perform. Each time my alarm went off, asking me how my high was progressing, I became too distracted to follow through with my description. To give you a sense of how deep in outer space I was, each description consisted of about 15 words but took over ten minutes to write.

This is the super stoney situation Reefer Madness warned high school kids about. I wasn't going to drown myself in a punch bowl during prom, but I definitely had a hard time stringing together a logical thought.

“The zippy electric undercurrent was just enough to keep me engaged in my video games.”

The body high forcefully locked me down into my couch, but honestly, on a lazy Sunday afternoon, it was the perfect buzz. The zippy electric undercurrent was just enough to keep me engaged in my video games. I was already in an isolating head space, wanting nothing more than to get stoned to the bone, roll around a little bit with my family, eat a big fabulous brunch, and play Super Mario Galaxy until I felt like a useless lump. This is how I psyched myself up for a Monday of ambition and productivity: by absolutely wasting all of Sunday.

For my second parlay with Nu's 1:1 Phoenix Tears, I upped the ante by smearing the sticky goo across a plump bong hit of a mild sativa. This was the combo that KO’d me. The onset of the oil on its own was brusque and aggressive, but when teamed up with a touch of fresh greenery, I had to gather myself on the couch for several minutes before I could even consider how the effects were bending my reality. As the crashing waves of day two’s onset subsided, the high developed into something much more groovy and creative than day one. I felt grounded yet airy, austere yet creative. This all led me to set myself up with a low stakes creative project, a few flash fiction prompts to get the juices flowing and see how effectively I could maneuver this complex level of daytime intoxication.

Finding my groove was tricky, the oil imparted such a daffy distractedness and focus seemed just out of reach. I built a small fort around my laptop—books, a Bluetooth speaker, notecards, and art supplies—so that whatever my distractions were, I might be able to charm them into something valuable. The plan worked out, and I sailed through the writing prompts, easing out from under the high with a long session in my sketchbook.

I surely wonder how my experience would have differed had I placed that inky gob on my tongue rather than a packed bowl. I wonder if the sweet floral bouquet of that gossamer smoke is the same flavor I would have found as the oil loosened and melted away in my mouth. I wonder if the ham-fisted onset would have been softer had I ingested it rather than combusted it.

Well, wonder in one hand and shit in the other and see which fills up first, amiright? The bottom line is that this was the perfect high for a wasted Sunday, and no day is ever wasted if you’re enjoying yourself. This oil took an already enjoyable lazy day and made it heroically stoned, and that is an improvement on malaise if ever there was one.