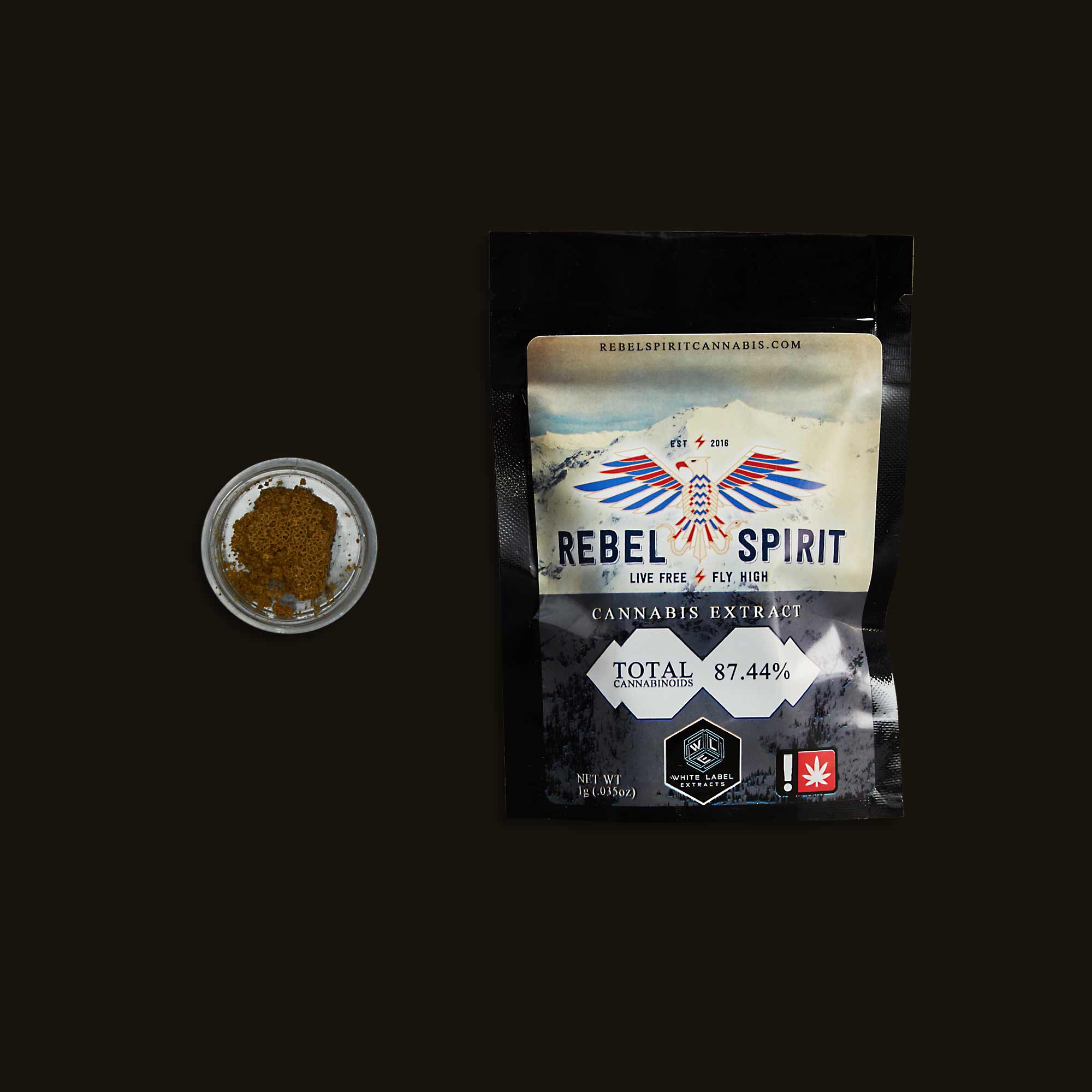 Rebel Spirit Cannabis' Thunderbird Rose Honeycomb is a euphoric concentrate with a diesel flavor. The soothing body high is ideal for a post-workout session on the couch, complete with munchies and a social buzz. Your head can start out feeling hazy before the high unfolds, coming on strong but only sticking around for a short while.

Ranked 39 of 40 in Concentrates for feeling Focused. 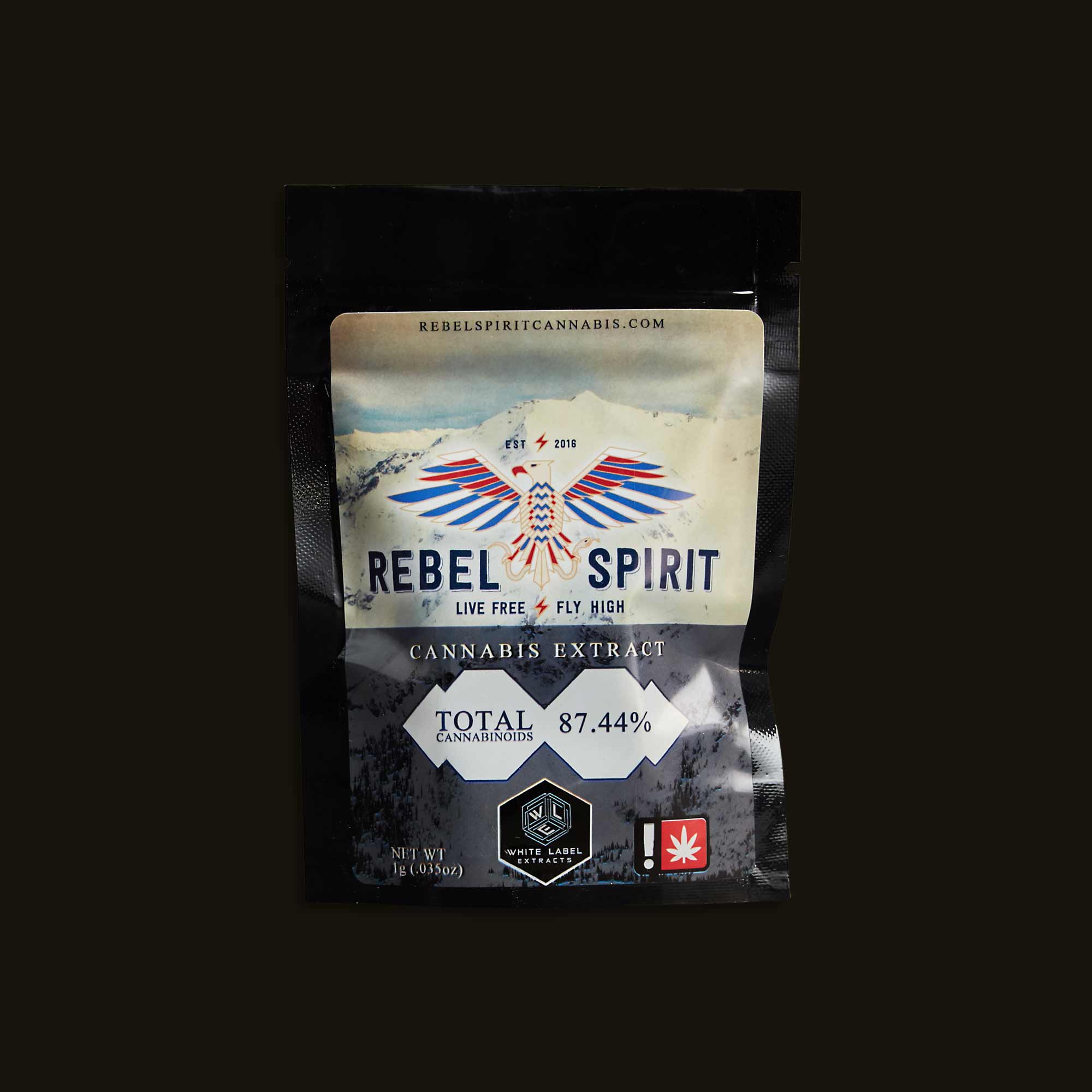 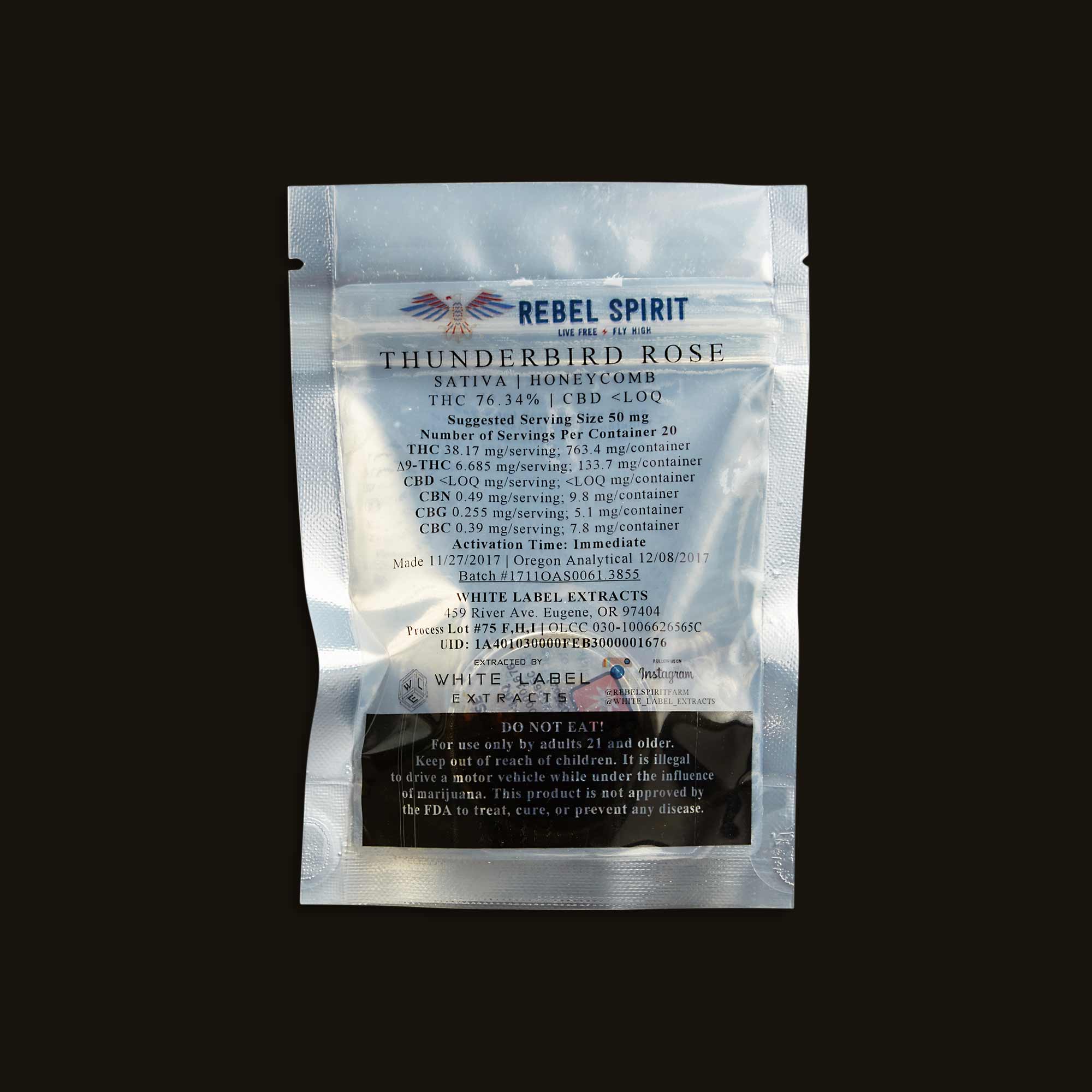 As our committee rates Thunderbird Rose Honeycomb, we capture their experience in real time through our ratings app and report everything back here.

Ranked 39 of 40 in Concentrates for feeling Focused.

Attention Extract Newbies, This Honeycomb Is For You

This crumble felt like a balanced, sativa-dominant hybrid, which makes it suitable for those who are hesitant to try extracts.

I’m not ashamed to admit it. I’m a very picky cannabis user, a snob if you will. And I prefer dabbing concentrates to just about any other form of consumption. I first started smoking dabs about two years ago when I was diagnosed with H. Pylori, a type of bacteria that lives in the gut and causes a range of problems from nausea and vomiting to weight loss, ulcers, and more. As a result, I take dabs for their higher doses and pain-relieving highs. I also love having the ability to control the temperature and get the best flavors. They’re a win-win in my book.

“When I tried dabbing concentrates, it honestly felt like a miracle.”

The main reason I got so into dabs versus flower was because of how smooth the hit is when taken at a low temperature. With my H. Pylori, I was nauseous all the time, and smoking flower would make me cough, which often led to vomiting. Still, cannabis was helping me eat and deal with the pain, so I didn’t have the option of not smoking. In order to make it through the day, I had to smoke large amounts of flower. So when I tried dabbing concentrates, it honestly felt like a miracle. Not only were the dabs so smooth that I didn’t cough, they were more potent so I didn’t have to consume as much. Luckily, I have my H. Pylori in check now so don’t have to use dabs as frequently as I had to before, but I still enjoy dabbing more than any other consumption method.

Like I said, I’m a snob, so I only smoke the most high-quality dabs. I’ve been using high-quality dabs both medicinally and recreationally for so long that I can actually feel if a dab is not pure or if the flower it came from was old, dry, and just plain shit. A lot of times people cough really hard after taking dabs, and generally that’s because the concentrate was either not good quality or the dabs were taken at too high of a temperature. To go one step further, I personally prefer sugar waxes and shatters because they tend to contain more —AKA the part of a plant that gives it its scent and flavor. Linalool for instance, is found in strains such as Lavender Kush and LA Confidential, but it’s also the most common terpene found in the lavender plant. When it comes to cannabis concentrates, different extraction methods result in different terpene levels. For example, I’ve found that “honeycomb” extracts tend to have less of the flavor that comes from a strong terpene profile, likely because they were stripped away in the extraction process.

Upon first glance and smell, Rebel Spirit’s Thunderbird Rose Honeycomb really threw me off. Whatever scent I could pick up was very weak and had the faint aroma of dry wood. I’ve seen a lot of really good extracts start to smell like this when they get old. If your concentrate gets exposed to a myriad of environments, the terpenes start to disintegrate. This extract also had a honeycomb consistency, which I’m personally not a fan of (as we all know), but other dabbers tend to like this consistency. The flavor tasted a little citrusy and a tiny bit spicy, but was otherwise very muted and unremarkable. The smoke, however, was a lot smoother than I would have imagined by the look and taste. I didn’t cough, my throat didn’t hurt, and overall it was a very smooth-smoking extract.

What really surprised me, though, was how calm and relaxed I felt after taking a dab of the honeycomb crumble. I felt at ease without getting tired. Prior to trying it, I was extremely stressed out. As a cannabis event planner, I am constantly dealing with extreme highs and lows. My job, while in cannabis, is still a high-stress job, so it’s important for me to find extracts that calm me down without making me want to curl up and take a nap. Almost instantaneously after taking the dab, I felt healthier both mentally and spiritually. I felt like the work I didn’t want to do before suddenly made me happy and inspired. If there’d been really good music on, I could’ve danced for hours. It was quite an amazing feeling, y’all.

“It’s almost like a cup of coffee or sunshine but without the caffeine crash or the sunburn.”

Instead of dancing for hours, I went to a coffee shop and did my work like the responsible young adult I try to be. Boring, I know. While I was happy and satisfied with the high, it unfortunately didn’t last very long. Generally, dabs last me anywhere from 60 to 90 minutes, but this flavor of Rebel Spirit’s honeycomb gave me a high that lasted 45 minutes at most. This would be fine if I could keep a dab rig at my side, but these damned coffee shops just aren’t chill like that.

If I were to recommend this concentrate to anyone, it’d be to those who need a quick pick-me-up in the morning without worrying about being high at work. It’s almost like a cup of coffee or sunshine but without the caffeine crash or the sunburn. This strain isn’t quite comparable to a racy sativa like Durban Poison or Jack Herer, but it felt like a balanced, sativa-dominant hybrid, which makes it suitable for those who are hesitant to try extracts. It gave me all the euphoria and uplifting I needed to get my ass ready, but without any of the anxious side effects some people experience from a more energetic sativa.

While I probably wouldn’t have selected this extract on my own and didn’t quite enjoy the flavor or consistency, I did like the effects it gave me even if they were short-lived. While it’s a lesson we tend to learn over and over again as regular cannabis consumers, it’s good to be reminded that sometimes looks can be deceiving.