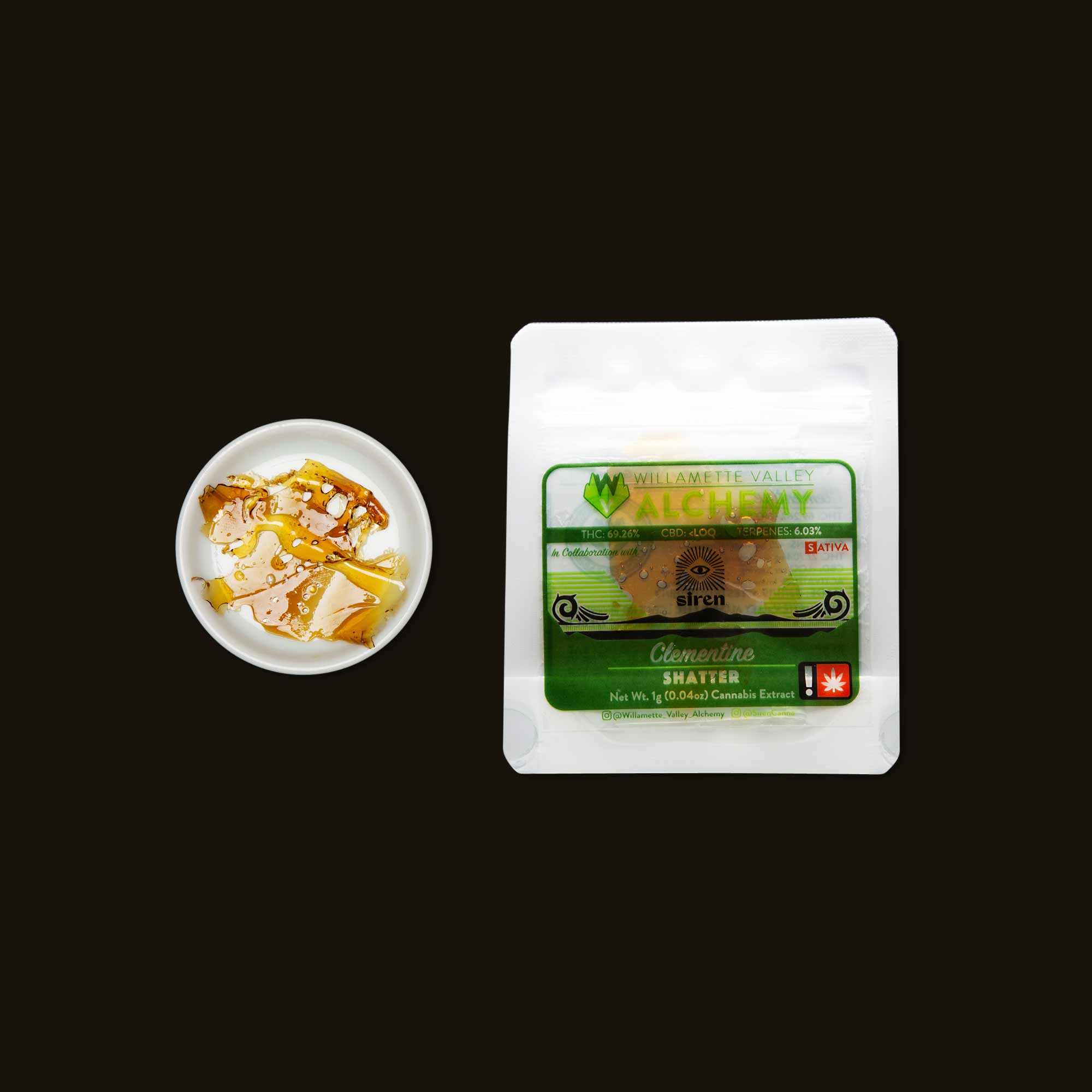 Siren's Clementine Shatter is a sativa concentrate with a flowery pine flavor and a lemonade aroma. You can expect an uplifted and energized high with a refreshing body buzz, but the onset can knock you off your feet. Wait out the first few minutes on the couch while the high sinks in. Once that passes, you should be left with a bouncy buzz that calls for some fresh air. Go slow and get outside.

Ranked 45 of 107 in Concentrates for feeling Euphoric. 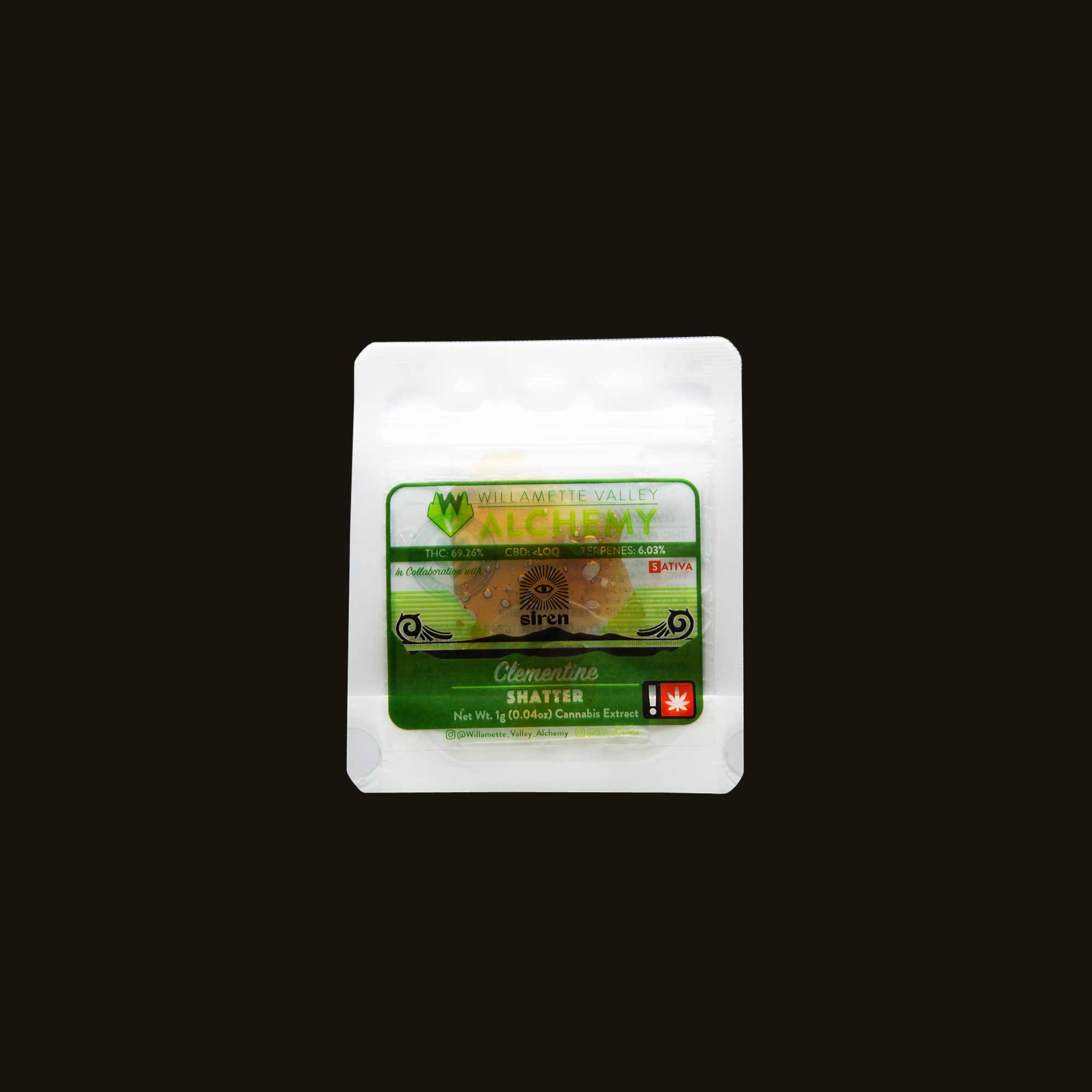 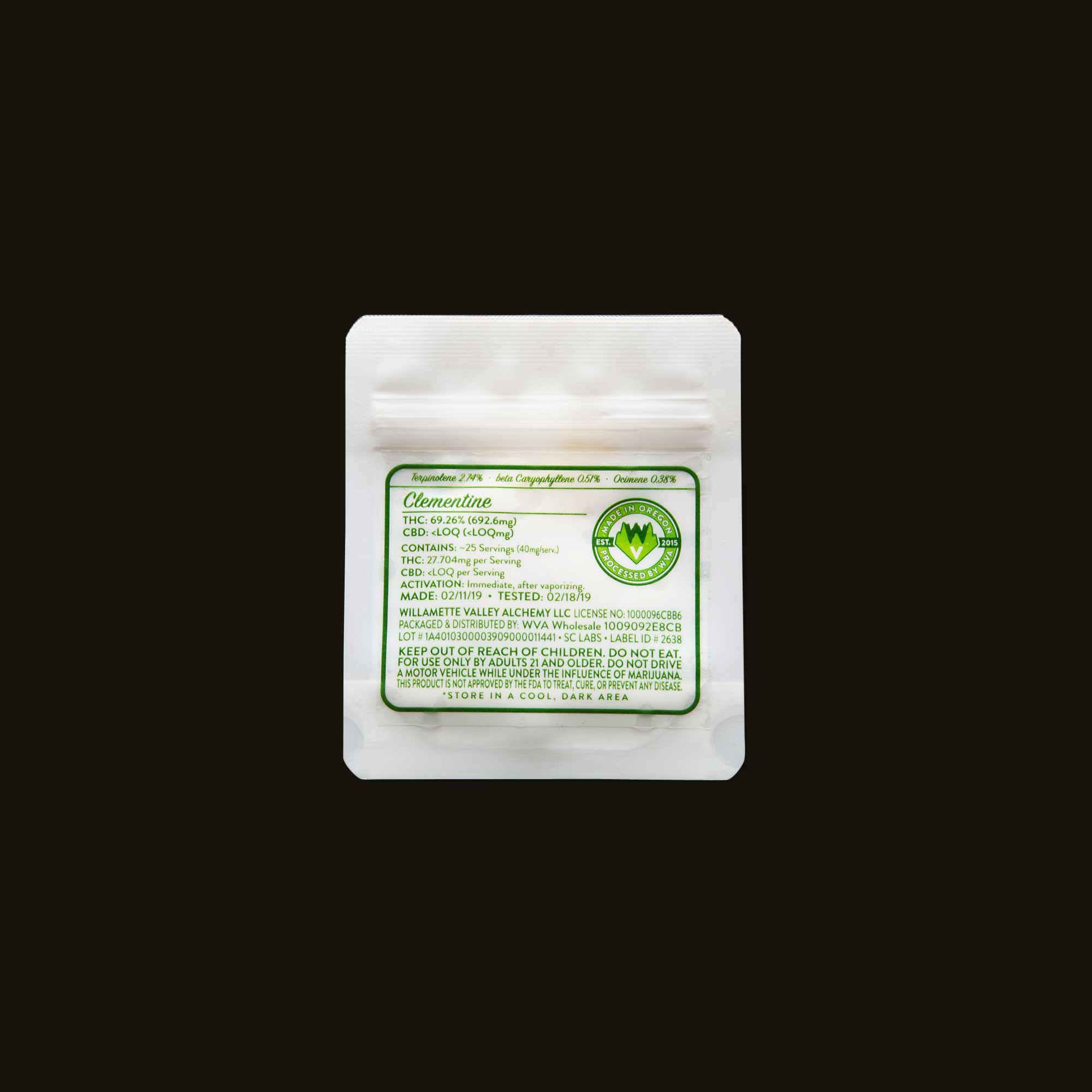 As our committee rates Clementine Shatter, we capture their experience in real time through our ratings app and report everything back here.

Ranked 45 of 107 in Concentrates for feeling Euphoric.

Fairytale Fantasies With One Small Catch

This shatter delivers a Disney princess experience—but only if you're willing to crawl through a coma first.

There is a connotation typically attached to sativas; they are buzzy, bright, and have the capacity to lift a user right off their proverbial feet. Clementine is no exception. In the ever-broadening field of hybrid sativas, however, Siren’s Clementine shatter stands out as the refined daughter of perennial faves, Tangie and Lemon Skunk. Where her parental strains tout tempered euphoria, manageable pep, and positive, if not downright exuberant, good vibes to share, Siren’s 69.26% THC Clementine shatter refines these perks and repackages them into a streamlined, glittering, focused high. But first, one must overcome the onset.

The perfume isn’t quite what I anticipated considering this strain’s citrusy lineage. It carries the mild suggestion of a piney, skunk-sprayed orange grove at the peak of summer but smelled from several miles away. The exhale was an equally mild breath of grassy lemon and skunky sap. For me, the size of a typical dab is just short of a grain of rice, and during inhalation, this dose felt correct. It was comfortable and didn’t seem to belie any forthcoming coughing fits or waves of nausea. But things ain't always what they seem. Especially when dabbing.

The onset arrived moments after I completed my dab, and it did indeed leave me nauseous, dizzy, and wracked by chest-imploding coughs. In the midst of this skyrocketing activation, I told myself, If the high doesn't balance out this onset I’m going to have to go outside and punch a tree or something. I was frustratingly incapacitated and ready to fight nature over it.

But thankfully, after a short lie down and a cup of coffee, Clementine revealed her true colors.

Once that onset had calmed, the swimmy frustration became lucid bliss. My mind was crystal clear, my body buzzed with a controlled hum, and my happiness meter jumped into the black. In this elated state, I was able to whip up a three-course dinner, engage in some meaningful family time, and even get a bit of work done. It was a Disney princess type of high; I was filled with joy just for the sake of being filled with joy and didn't care if I was scrubbing a floor or working over a stove or mending socks or sorting compost from recycling. I was happy to simply be.

The energy boost was reminiscent of Tangie, and the dreamy elation was Lemon Skunk all day. But the carefree, romantic way the two effects coalesced was all Clementine. Unfortunately, that gnarled onset was also all Clementine, and by my second session, I knew I’d have a clear opinion on whether the onset was worth the high.

“The Disney Experience does involve spending some time in a coma, so it’s a pretty fair trade.”

For round two, I dialed my dose down by half. I knew that by doing this I risked dulling the euphoria, but I also knew I didn't want another onset that made me contemplate violence against flora. And honestly, half a grain of rice doesn't exactly thrill me when it’s loaded in my dab tool. I hoped I wasn’t setting myself up for disappointment, but as it turns out, halving the dose was the key to sidestepping the rough onset.

Round two was indeed far less debilitating onset-wise, but there was a sacrifice. When my dose was halved, the high was decidedly more energetic than cerebral, and while I certainly was uplifted and joyful, it was not the Disney princess experience of round one. Admittedly, the Disney Experience does involve spending some time in a coma, so it’s a pretty fair trade.

Despite having a THC percentage that is arguably moderate compared to other concentrates, Clementine’s onset sidelined me with just one restrained dose. But the experience didn't end there and in time developed into the stuff of daydreams. Thus a conundrum. In many ways, Clementine felt like the new gold standard for citrusy sativas, but my first experience could be boiled down to a collision of comatose tree-puncher and fairy-in-flight. During round two, I was willing to muddy the extraction’s unbridled joy for the sake of a tolerable onset and experienced a tempered version of the first round’s elation as a result.

So, I did not find the precise balance I desired, but that doesn't mean Siren’s Clementine shatter is anything to avoid. In fact, if I loved an incapacitating onset that transformed me into a biracial Cinderella, I would dab this every day. But for me, the fantasy only works sans coma. Your fairytale fantasies may vary.