White Label Extracts' White 99 Honeycomb is earthy and uplifting. The onset can knock you down, so dab this in a cozy space. A happy, buzzy high is likely to hit just as quickly, leaving you content and zoned out. You could take this high to the gym for a spacey workout or just mosey around your house tidying up odd ends until you crash.

Ranked 173 of 194 in Concentrates for feeling Euphoric. 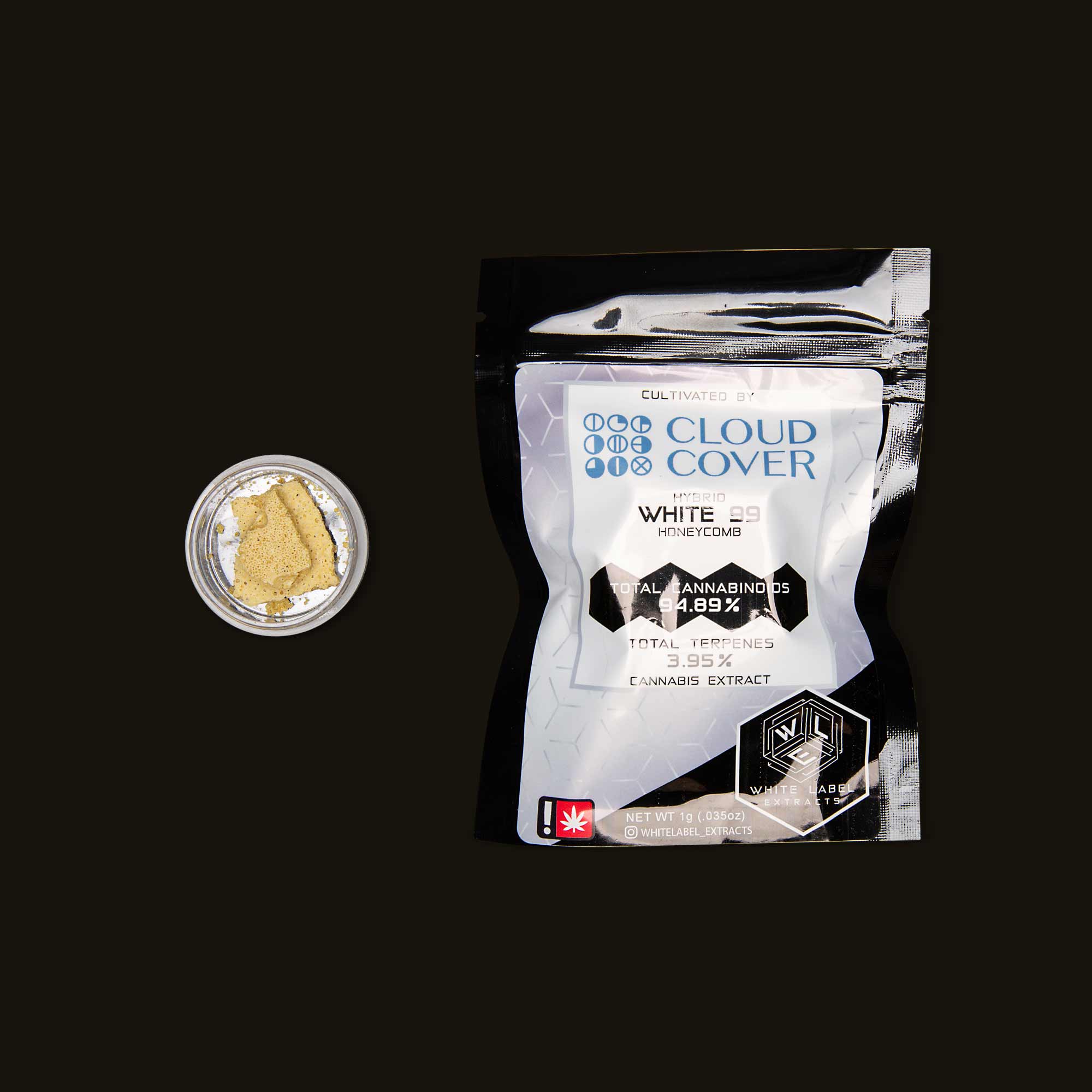 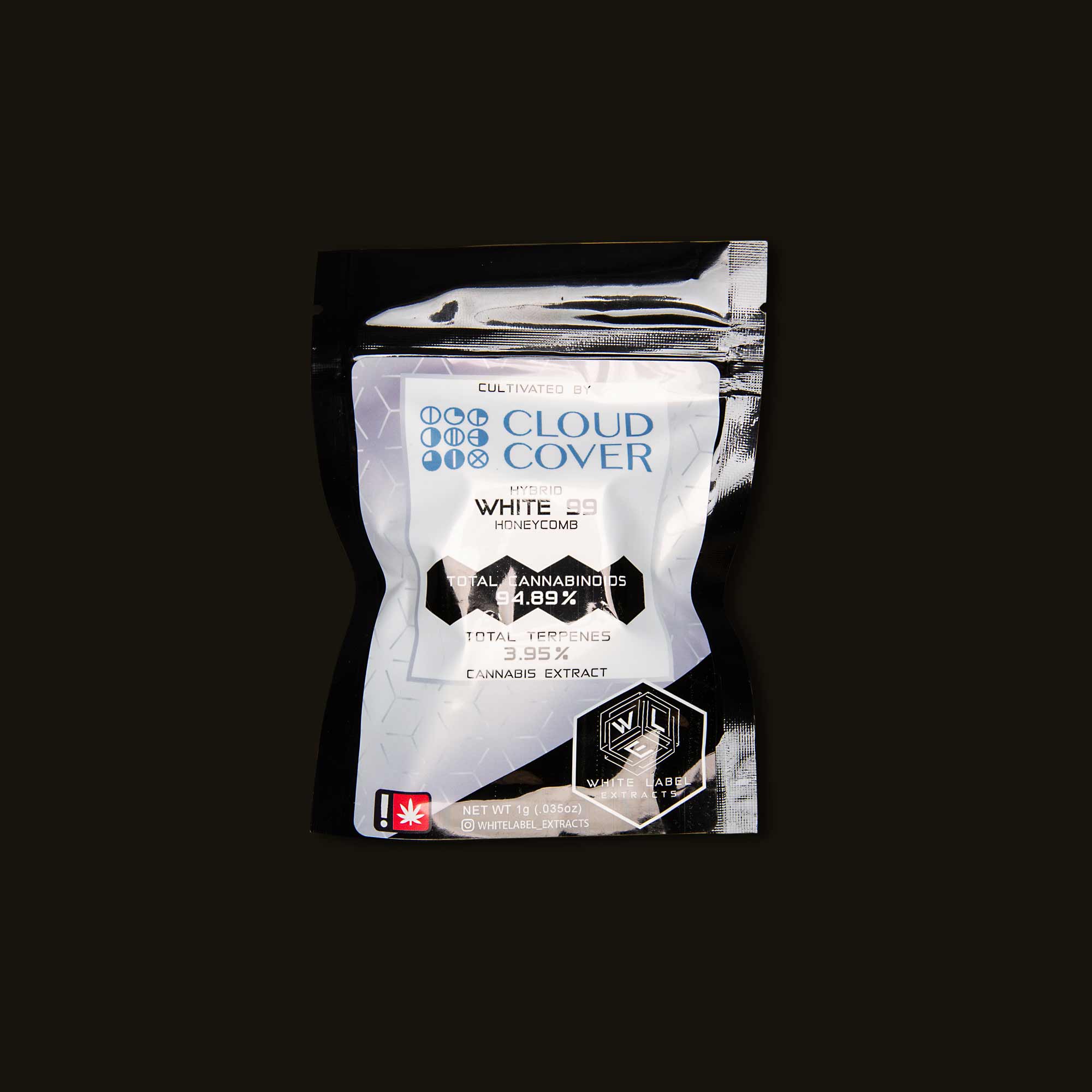 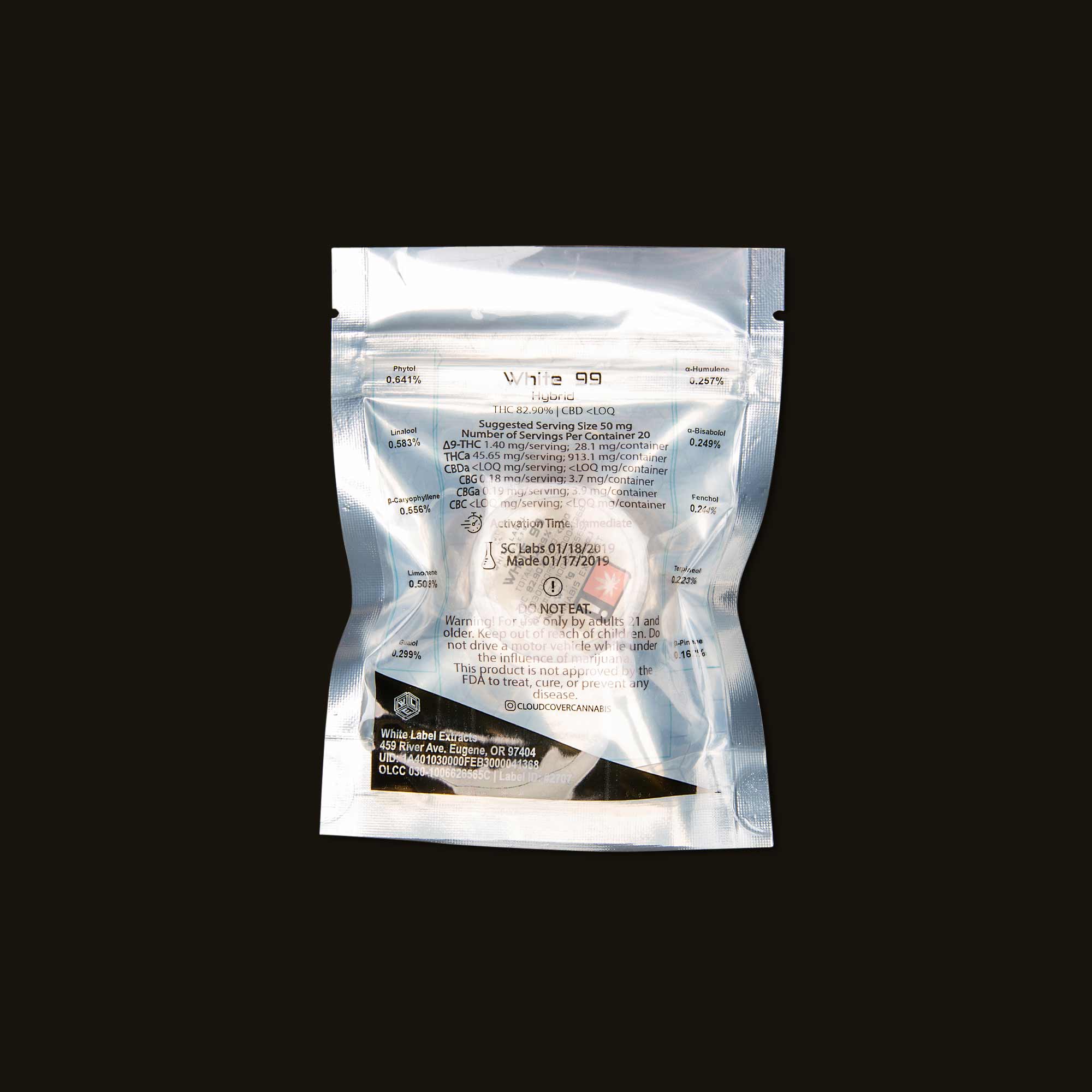 As our committee rates White 99 Honeycomb, we capture their experience in real time through our ratings app and report everything back here.

Ranked 173 of 194 in Concentrates for feeling Euphoric.

A True Knockout Of A Dab

This honeycomb brought me to my knees. Then it lifted me up.

One time, while shopping for dabs, a budtender confessed he specifically sought out products that were so strong they left him momentarily crippled. He said, “I just love it when my eyes start to water and I can’t breathe anymore, man.” I knew what he was referring to. Every once in a while, I’ll try a concentrate or extract so powerful that my eyes pour, my chest implodes, and I have to either take a knee or go fetal for at least a minute. I’ve always considered those episodes a (negligible) workplace hazard. Personally, I feel that a briefly incapacitating onset is neither here nor there; it’s what comes after that counts. But for others, that incapacitating onset is a rush worth chasing. Those people will enjoy White Label Extracts’ White 99 Honeycomb.

“The inhale is a sheer breath of cannabis and flower petals, and the exhale is a brief flash of classic pine and citrus.”

White 99 is a hybrid strain and a powerful performer on a number of levels. Its post-extraction processing has resulted in a honeycomb formation as brittle as hard candy and as aerated and labyrinthine as an actual beehive. Its perfume is a delightful patchwork of English garden floral, effervescent citrus, and deeply verdant pine. The inhale is a sheer breath of cannabis and flower petals, and the exhale is a brief flash of classic pine and citrus. Then comes the onset.

White 99’s 82.9% THC high arrived immediately and aggressively. Seconds after my first hit, I had to cop a squat to ride out the remainder of the rollercoaster onset. It was an intense moment that made my chest uncomfortably tight, my eyes weepier than a waterfall, and my legs turn to slinkies beneath me. My head was soggy with thunderclouds and my ears hummed with the amplified echo of my heartbeat. In some circles, an onset as paralyzing as this is not another day at work, but a hotly sought after delirium.

It was only a brief vexation, and before it could color my day with its intensity, it dissipated into a bright, sociable high. What started as a knockout ended up being a remarkably manageable and sunshiney dab. I kept my to-do list short and simple and was able to perform the day’s required adulting without feeling overwhelmingly like a burnout who recently dabbed themselves into the ground. Even though one conservative fragment of this glassy honeycomb had very much dabbed me into the ground. For its few active hours, I was inarguably stoned to the bone, but the high was still fizzy and bright. As the last of the active cannabinoids were absorbed by the setting sun, my energy faded as well. Both the day and the high had been demanding but fulfilling nonetheless.

“The resulting high made for a workout that was a perfect balance of spacey dissociation and painless stamina.”

My second parlay with this White 99 Honeycomb occurred the next morning. I again prepped a dab that was roughly three-quarters the size of a grain of rice, and once again the burly whirlwind of the onset left me breathless. But this time, once I shook off the onset’s residual vibes, I channeled all the leftover bubbly stoner sensibility into a vigorous workout. I kicked open the doors to Planet Fitness, but not before I smoked a couple bowls of hype sativa in the parking lot. The resulting high made for a workout that was a perfect balance of spacey dissociation and painless stamina. I sank effortlessly into my asanas, cruised over six miles on a stationary bike like I was on vacation, and pumped myself right into a new weight class at the free weights. The comedown again left me feeling exhausted, but on day two, it was as much the fault of my gym-going hubris as it was the intensity of the honeycomb.

I don’t typically chase the rush of an onset this White 99 Honeycomb provided, but I enthusiastically chase after the rapturously stoned feelings that take over once the domineering onset evaporates. For those who are actively chasing both of these, look no further. This is the knockdown, drag-out, golden afternoon dab you’ve probably been chasing after.

Be the first to review White 99 Honeycomb from White Label Extracts and help others find their high.