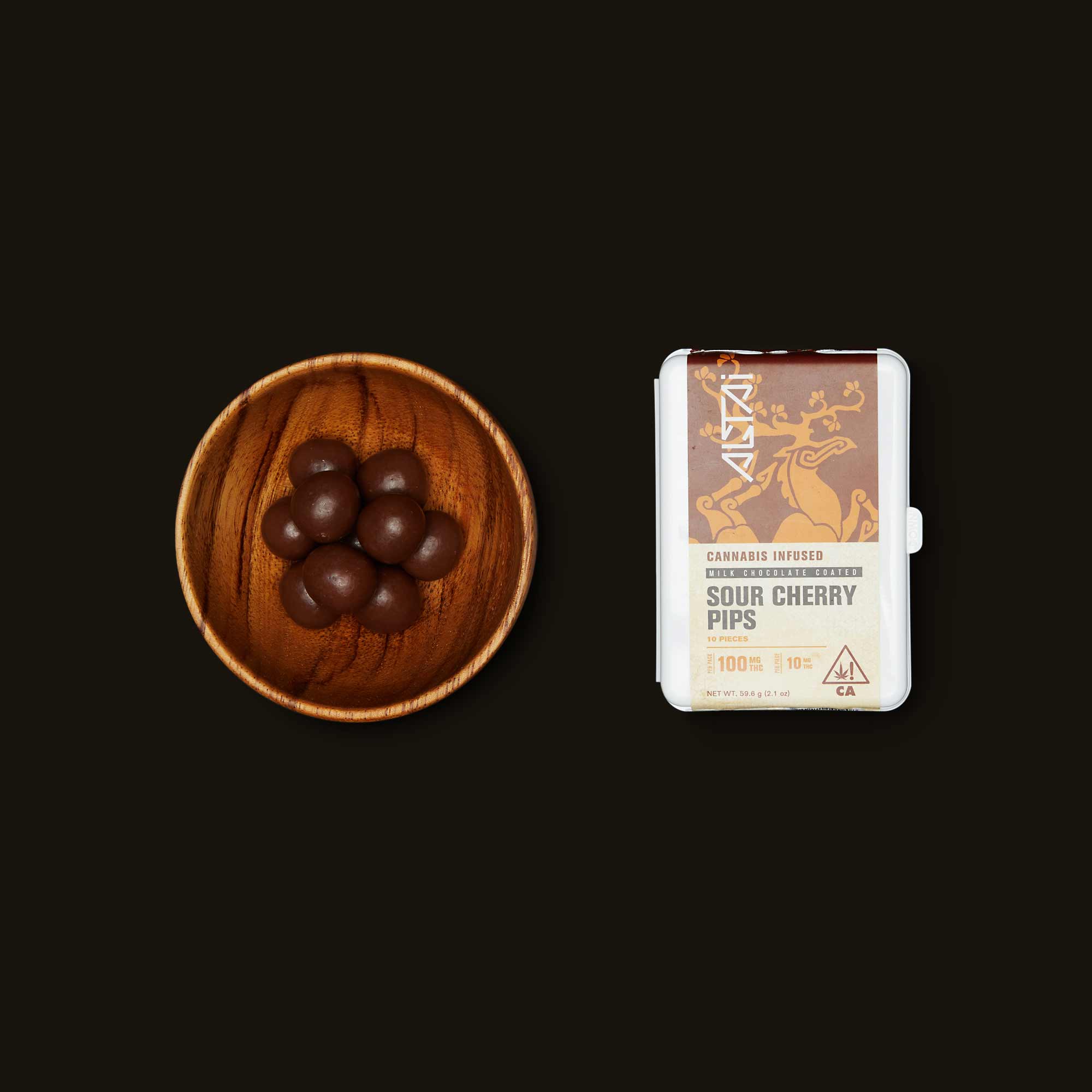 Altai's Sour Cherry Pips have an exceptional flavor of creamy chocolate with a sour zing of cherry makes it hard to resist having another one, but it's ok. A serving is 10 pieces. You'll likely notice a mood boost and spark of motivation, but you'll also feel dry in the eyes. The soothing body high and curiosity-inducing head buzz makes this a good edible for a date night or evening of pampering.

Ranked 79 of 175 in Edibles for feeling Euphoric. 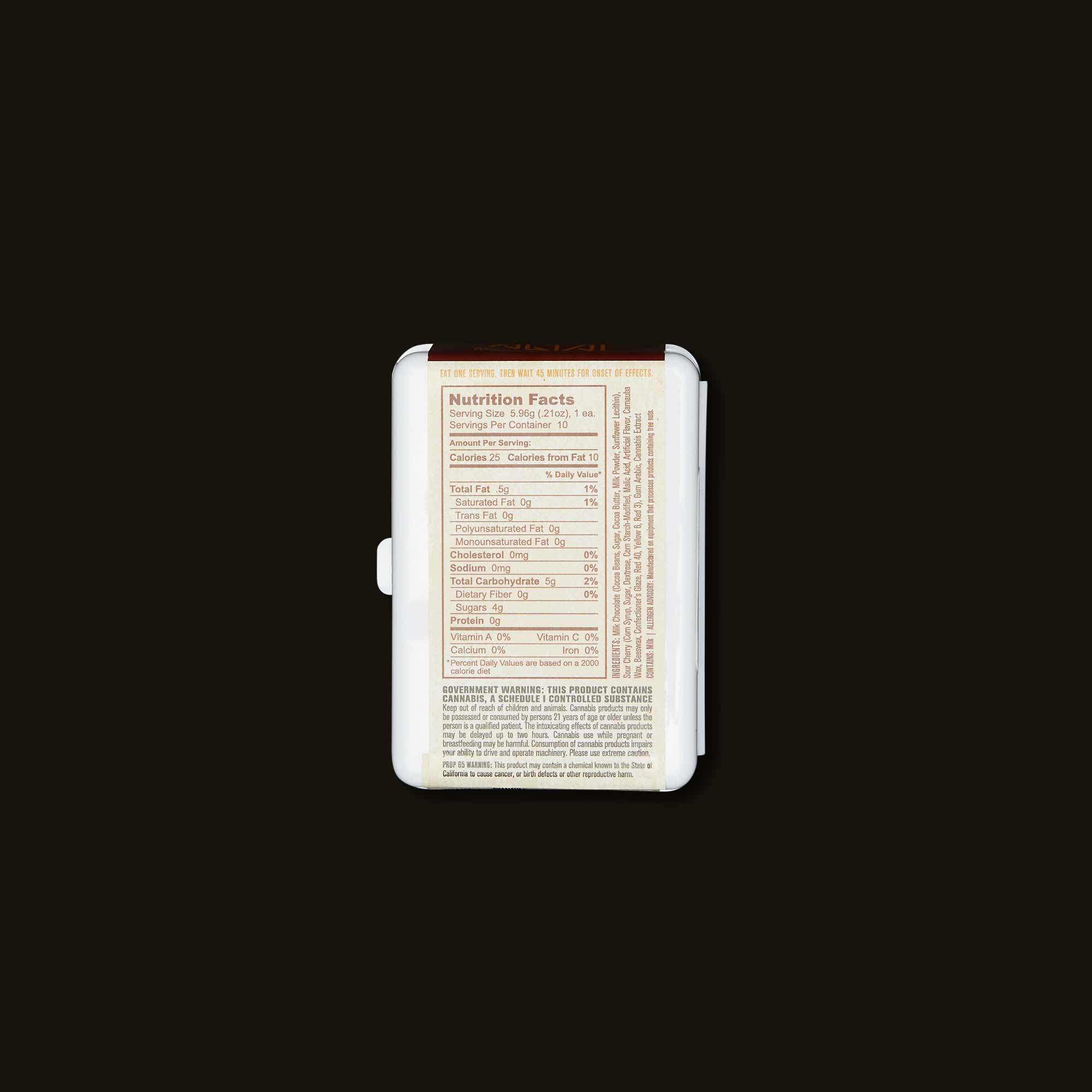 As our committee rates Sour Cherry Pips, we capture their experience in real time through our ratings app and report everything back here.

Ranked 79 of 175 in Edibles for feeling Euphoric.

A Perfect Rainy Day Pip Me Up

One of these Sour Cherry Pips gave me a warm, floaty euphoria. I can only imagine what two could've accomplished.

According to Angeleno media and motorists, any meteorological activity that does not result in perfect weather is catastrophic. At the first sign of a drizzle, freeways become solid red lines of brake lights. Accident indicators riddle GPS routes as teenagers hydroplane their parents’ BMWs into the bumpers of people brake checking for no reason. Breaking news alerts burst through scheduled programming. Breathless weathermen, thrilled to finally have something to talk about, motion over colorful graphics depicting dangers of hypothetical storms that rarely come to fruition.

At the time I decided to try Altai’s Sour Cherry Pips, Los Angeles hadn’t seen the sun for a week. Instead of waking up to palm trees sparkling in the sunlight and crisp air that’s warm by noon, conditions alternated between a matte grey sky and butts of rain heavy enough to leak through my ceiling. I decided to stay inside with my weed and delivery apps, but soon enough I had anxiety brewing in my stomach and spine. What started as a cozy respite from reality had become an existential bummer I couldn’t shake. I resolved to leave my apartment and do something. I just had to get stoned first.

“A favorite among industry insiders (including yours truly), Altai exists at the peak of the artisanal edibles market.”

A favorite among industry insiders (including yours truly), Altai exists at the peak of the artisanal edibles market. Each of their beautifully crafted candies are distinctly gourmet from the attention to packaging to their quality ingredients. Most importantly, they employ a dosing technique that uses extremely high-quality cannabis at low doses to produce a feeling that is light, fun, and faintly psychedelic. Though their Sour Cherry Pips come in at 8.5mg of THC a piece, they feel a bit stronger. I ate one of these weedy chocolate cherries and while the chocolate tasted good, the cherry filling tasted like Robitussin with a texture that was way too chewy and thick. The flavor would end up being my only critique and a brief one at that since the taste didn’t linger.

I decided to take my high to the Glossier store on Melrose. The high settled in with heavy eyes and a soothing warmth that melted over my body just as I entered the store. I was ready. For those who don’t know, walking into Glossier is like stepping into one of their omnipresent advertisements: simple, moist, and above all else, millennial pink. Slightly rude employees in pink lab coats held iPads. All of this left me feeling awkward and confused. I wanted to buy lipstick, not give them my email address and phone number. After about ten minutes spent bumbling around the rose-colored room trying to figure out what color to get, I grew weary. I missed my weird solitary existence where everything was silent but the rain. I paid for my two lipsticks and got the fuck out of there.

“Chills ran down my arms as my anxiety melted away.”

There’s a certain feeling I get in my spine when I really like something, whether it’s a person, a song, a piece of writing, a high—anything I really connect with. The feeling is an upward motion pulling on the point where my spinal cord meets my crack. It tingles upwards into the sky and leaves me feeling light and elated. As I was trying to isolate what feelings I was getting from the cherry poop, that sense of elation hit me hard. Chills ran down my arms as my anxiety melted away. In its place, a vibrating sense of excitement lasted through the afternoon.

Back at home, I sat on my deck overlooking the hills. The clouds began to break for soft beams of light, casting the first shadows I’d seen in days. In reflecting on my rather odd experience, I found that Altai’s Sour Cherry Pips are a really fun little edible, but definitely not the most practical. Running errands in the rain probably isn’t the move. Eating one sent me into a sort of stoner purgatory where I couldn’t quite tell where my high began and my malaise ended. In retrospect, I should’ve either eaten two and gotten super high, or eaten one and just stayed at home on the toilet. Eating one and then going out left me too stoned to confidently accomplish the simple task at hand, but not high enough to like being in public. Next time, I’ll probably say fuck it, eat three in bed, and see what happens. Listening to the rain while wrapped in satin sheets and the warm euphoria of this high sounds like a wintertime heaven I could get used to.