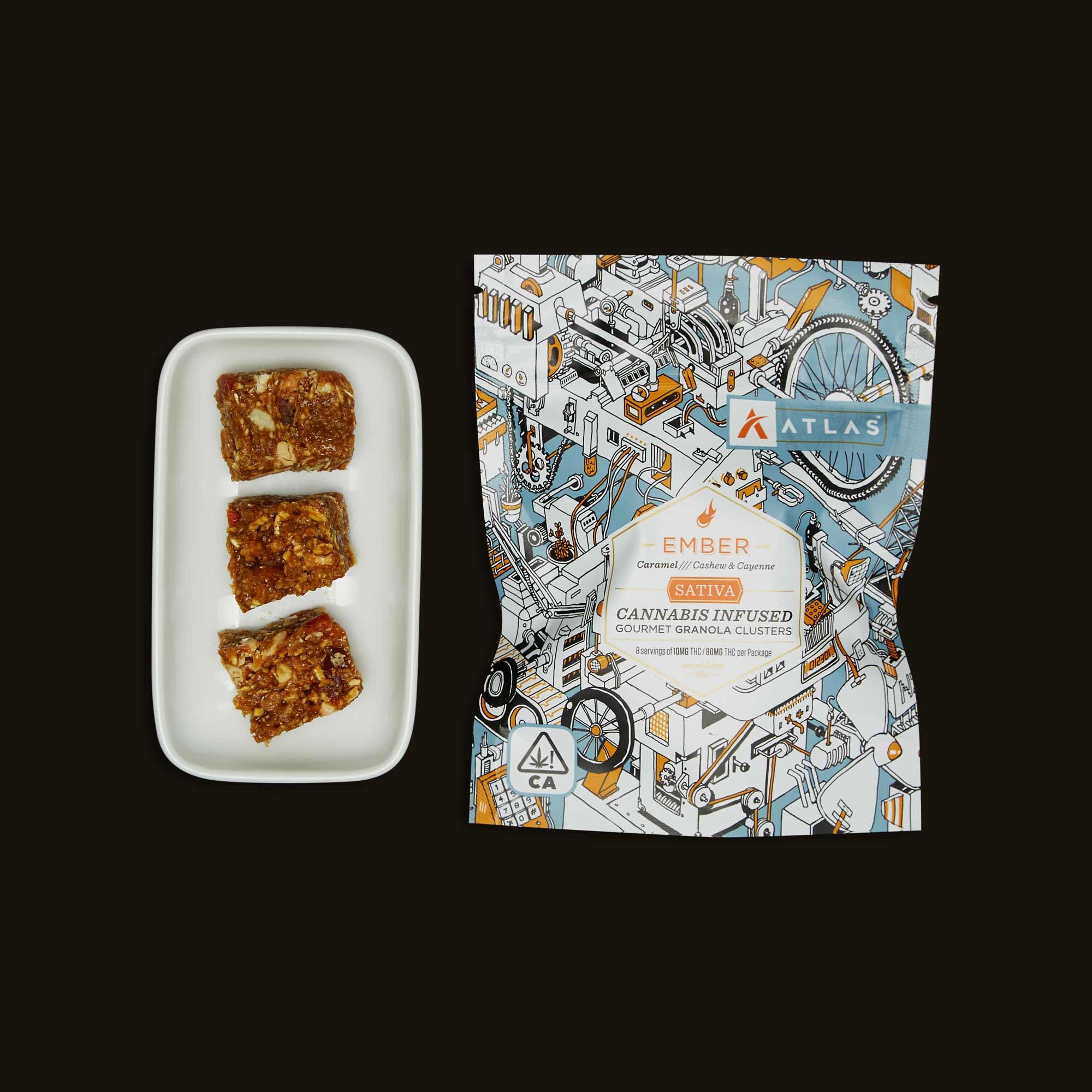 Ember granola clusters are blended with caramel and cayenne for a spicy-sweet flavor. The head high is often focused but strong, leaving you in an uplifted daze with a dose of creative energy. It's not the most active high, so save these for relaxed nights and couch-bound hobbies. Cannabis newcomers should take caution with these potent clusters; each one packs 20mg of THC, which is four servings.

Ranked 93 of 157 in Edibles for feeling Euphoric. 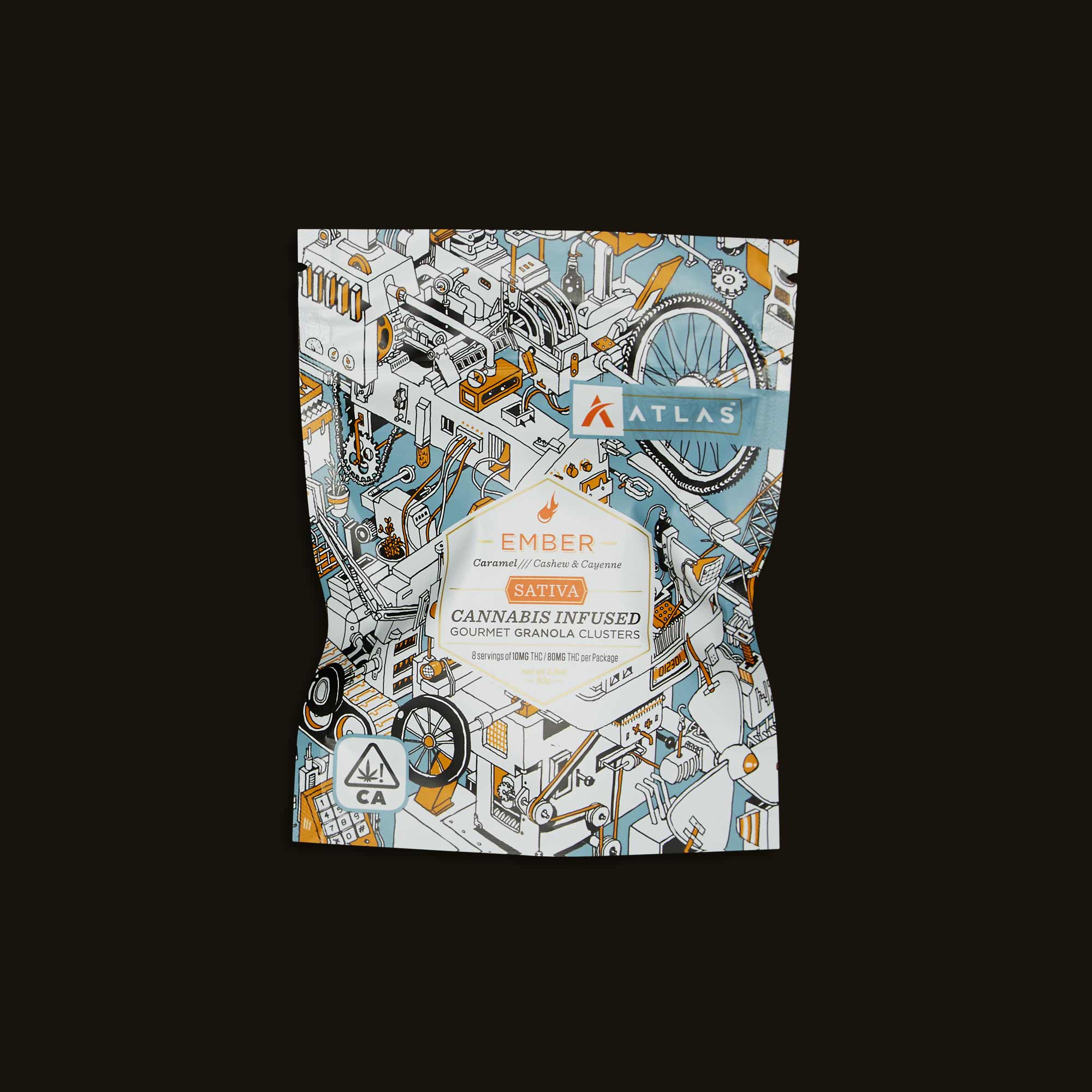 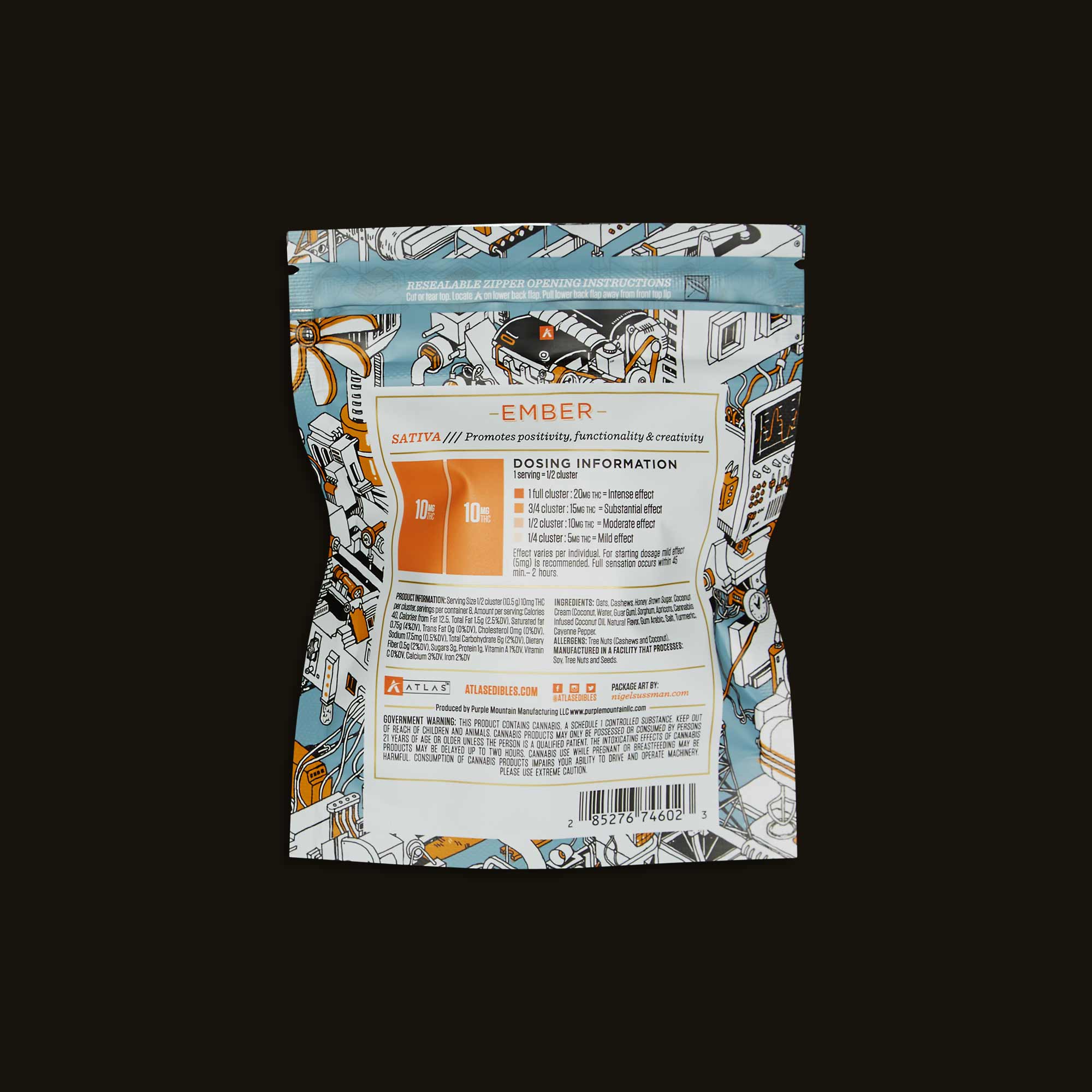 As our committee rates Ember, we capture their experience in real time through our ratings app and report everything back here.

Ranked 93 of 157 in Edibles for feeling Euphoric.

The high helped me get to a peaceful space to rest.

These Are Not Your Mom's Granola Clusters

Potent and zippy, these weedy bites will help you crush that workout or all-you-can-eat buffet.

Aside from mid-summer hikes in the woods, day trips with children, or the rare yogurt parfait, granola does not find its way into my life too often. Diabetes looms too large over my ancestral biology for me to partake in delights like dried fruit and honeyed oats. And granola’s reputation as a healthy breakfast option has always been a bit of a false suggestion. Granola is a treat—plain and simple—but I still let the healthy breakfast delusion dictate how I auditioned Atlas Edibles’ Ember, an oat and nut cluster with a thrust of sativa and a bolt of sweetness. While testing them, my impending diabetes loomed larger but I was far too lit to care.

“My skin was fizzing with delicate pins and needles, which left me feeling like I was going to grow wings and fly off the treadmill.”

Atlas Edibles has engineered something truly special in their line of cannabis-infused granola clusters. Ember, for example, touts a cheeky suggestion of cayenne within its rich caramel profile, satiny roasted cashews, and tart, leathery chew of dried apricot. And holy crap does it smell and taste of deliciously skunky weed. For all of the products that attempt to remove all traces of marijuana essence, it is a celebratory event to indulge in a goody that embraces and harmonizes with its THC source. The thoughtfully executed ingredients, the bite-size serving that satisfied my sweet tooth without threatening to rot it out, the savory smack of cannabis—everything about this little edible felt so deliberately geared toward me. It was only the ropy chew of the dried apricot (which could’ve enhanced the mouthfeel had it been finely chopped) that turned me off.

It took about 45 minutes for the 10mg of THC to register in my consciousness, and it did so while I was 15 minutes into my cardio workout. (To be clear, I only had to eat half a cluster to get to 10mg, so take note before you eat the whole thing and potentially wreck yourself.) The high struck me right in the torso and radiated out of my solar plexus in waves of vibrating sunshine. My skin was fizzing with delicate pins and needles, which left me feeling like I was going to grow wings and fly off the treadmill. My body was rubbery as all hell but also firm and energized. I became a cross between a stalk of young bamboo and a two-week-old gummy worm, which I have to say, was a friggin’ awesome way to work out.

I bounced through the 30-minute circuit station and by the time I got to my yoga cooldown I was turnt all the way up. I threw a mat down and began a sequence of Ashtanga Vinyasa poses that quickly devolved into some wild twerk-aerobics performed on all fours. I twerked child’s pose, puppy pose, and down dog, then I twerked plow pose, half moon pose, and tried really hard to twerk a standing split. I twerked three middle-aged men out of the room with my cat/cow twerk/pose.

The energy afforded me by Atlas Edibles’ little golden nugget propelled me through my morning like rocket shoes. But when it abated, about three hours after activation, it left me with a gaping hole in my soul that could only be filled with every food item in my house. And so I ate everything. By lunchtime, I’d consumed way more calories than I burned with all my a.m. gym floor twerk team antics. The dichotomy was almost too much; on one end of the spectrum, I was stair-stepping in beast mode, while on the other, I was pouring Doritos down my throat to re-runs of RuPaul's Drag Race. I mean, technically this is balance, but I wouldn't want to tightrope-walk between these two poles often.

For my second session with Ember, I tweaked my approach. I would still spend the morning at the gym, but this time my session would focus on my abs rather than hot-shot cardio. I would also eat a banana and drink a super creamy coffee post-gym to offset the massive munchies.

Again, the onset arrived nearly an hour after I’d eaten it, this time mid-sit-up. I mused that I had unlocked some new potential by focusing my workout in the vicinity where I was digesting the Ember nugget. My skin was again alight with effervescence, but now there was an added dimension of surrealism. The landscape bent and warped as I navigated between machines and the glistening blurs of my fellow fitness enthusiasts. As the high developed, I caught a few rounds of brief nausea, but I was also focusing some high-energy lifting on my core, so I may be more to blame than the edible.

The slight variation in workout and prep helped me dodge the near-mythological munchies of the prior day, but real talk, I still ate a solid handful of mini Reese's peanut butter cups as soon as I got home. The high on the second day seemed to wane faster than the first day as well, which I chalked up to a more strenuous, less energizing workout. I was beat, and after I sucked the last of the chocolate from between my teeth, I dozed off on the couch. I’m not big on midday naps, and certainly not on sativa days, but I was content with how this high had shaken out thus far, so succumbing to sleep felt acceptable.

For its petite size, Ember is deceptively potent. During both sessions, I found the high to be manageable, but only just so. Those 10mgs pack a classically buzzy sativa with enough lift to power a high-intensity workout just as effectively as a gluttonous trash TV snack sesh. The sunny surrealism discouraged socializing with anyone other than myself, which could be a bug or a feature depending on your own POV. In my mind, I’m not at the gym to chat. I’m at the gym to be stoned to the bone and sweaty AF. Ember supported each of these goals with aplomb.