This Matcha Chocolate Bar is one of Défoncé's most popular chocolate bars. If you're a green tea junkie with a passion for cannabis, this could be your edible. It's swirled together with creamy white chocolate and the delightfully bitter aftertaste of matcha. This should be an uplifting, energetic high that pairs well with a date night or some low-key socializing.

Ranked 32 of 321 in Edibles for feeling Euphoric.

Going To A Show
8AM Kickstart
Getting Shit Done 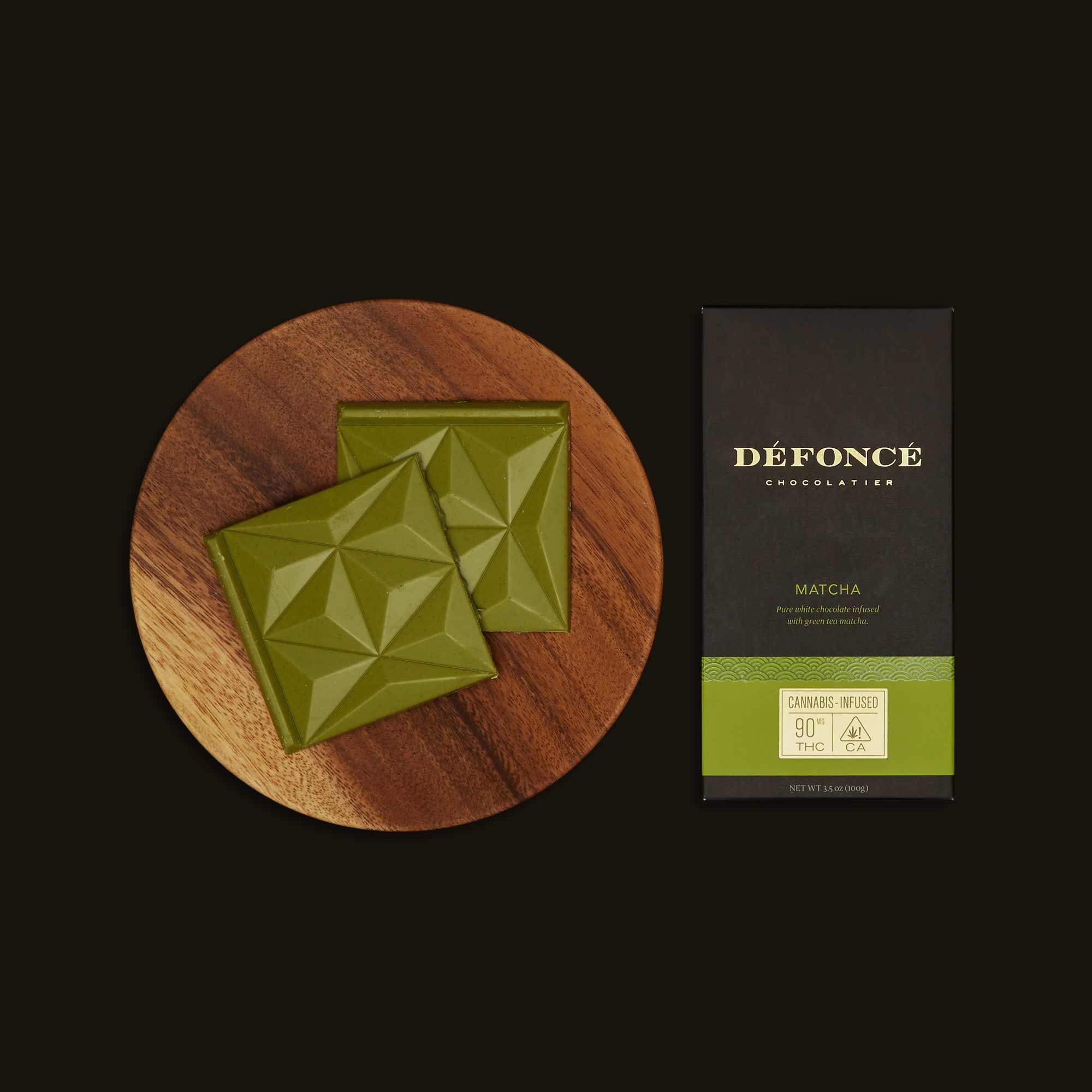 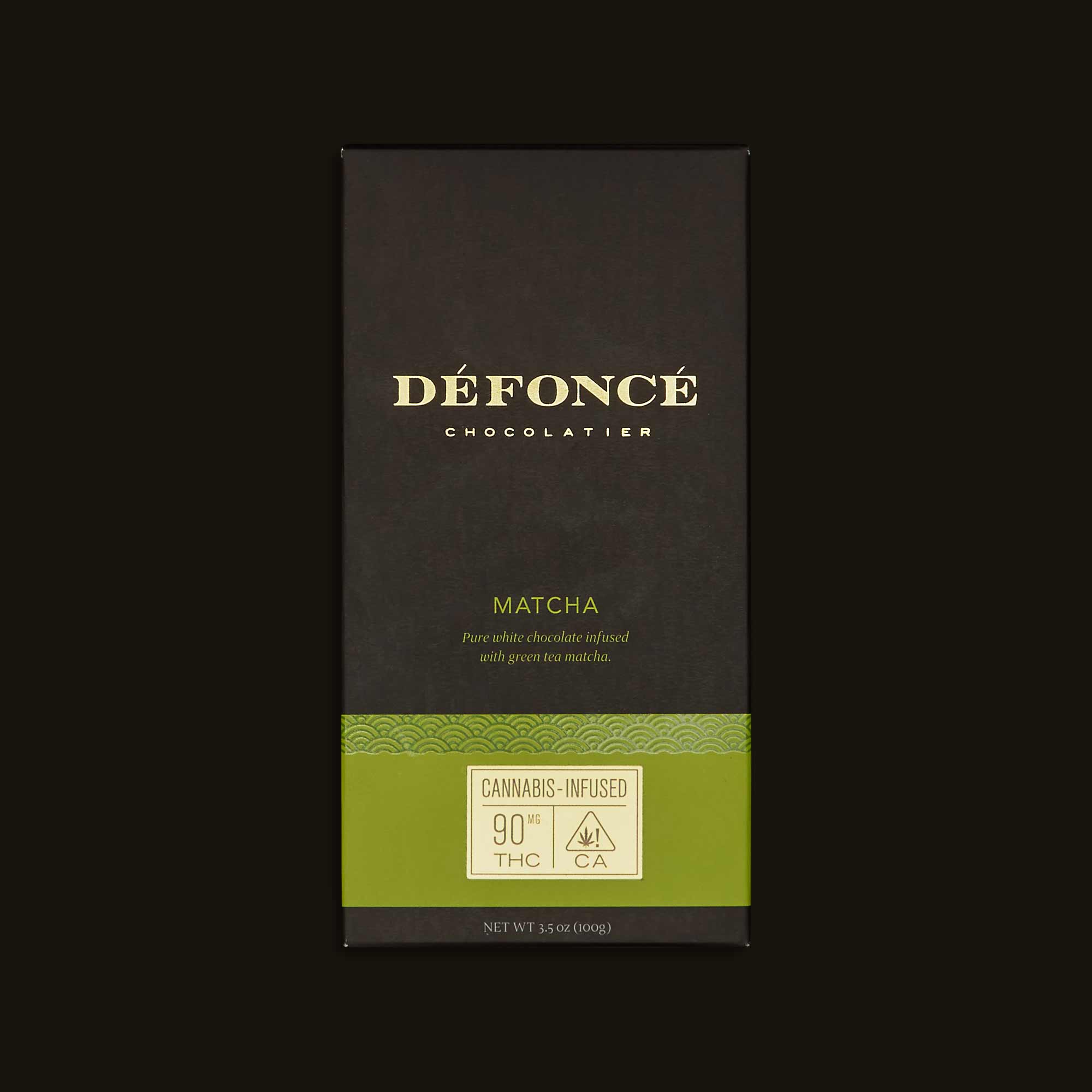 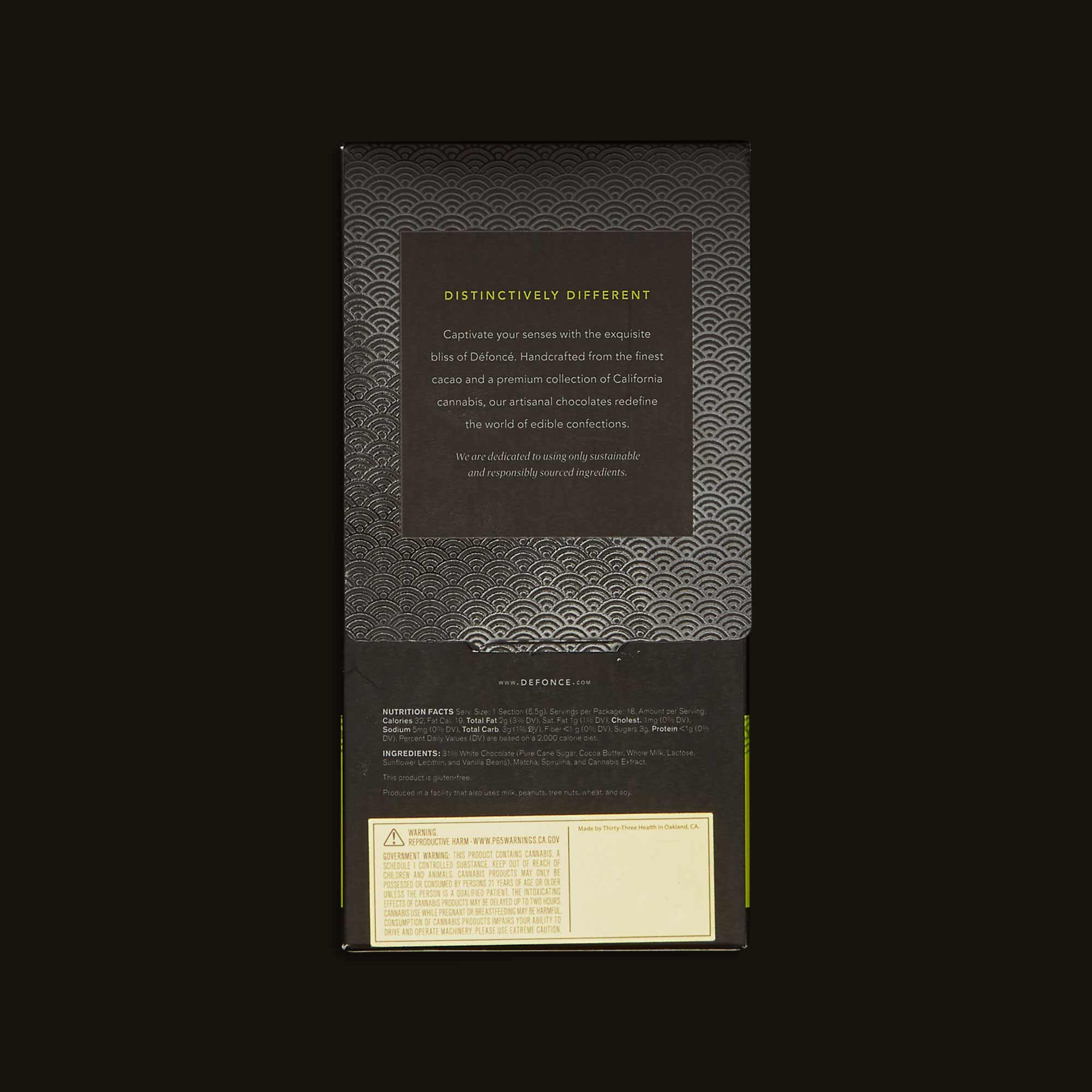 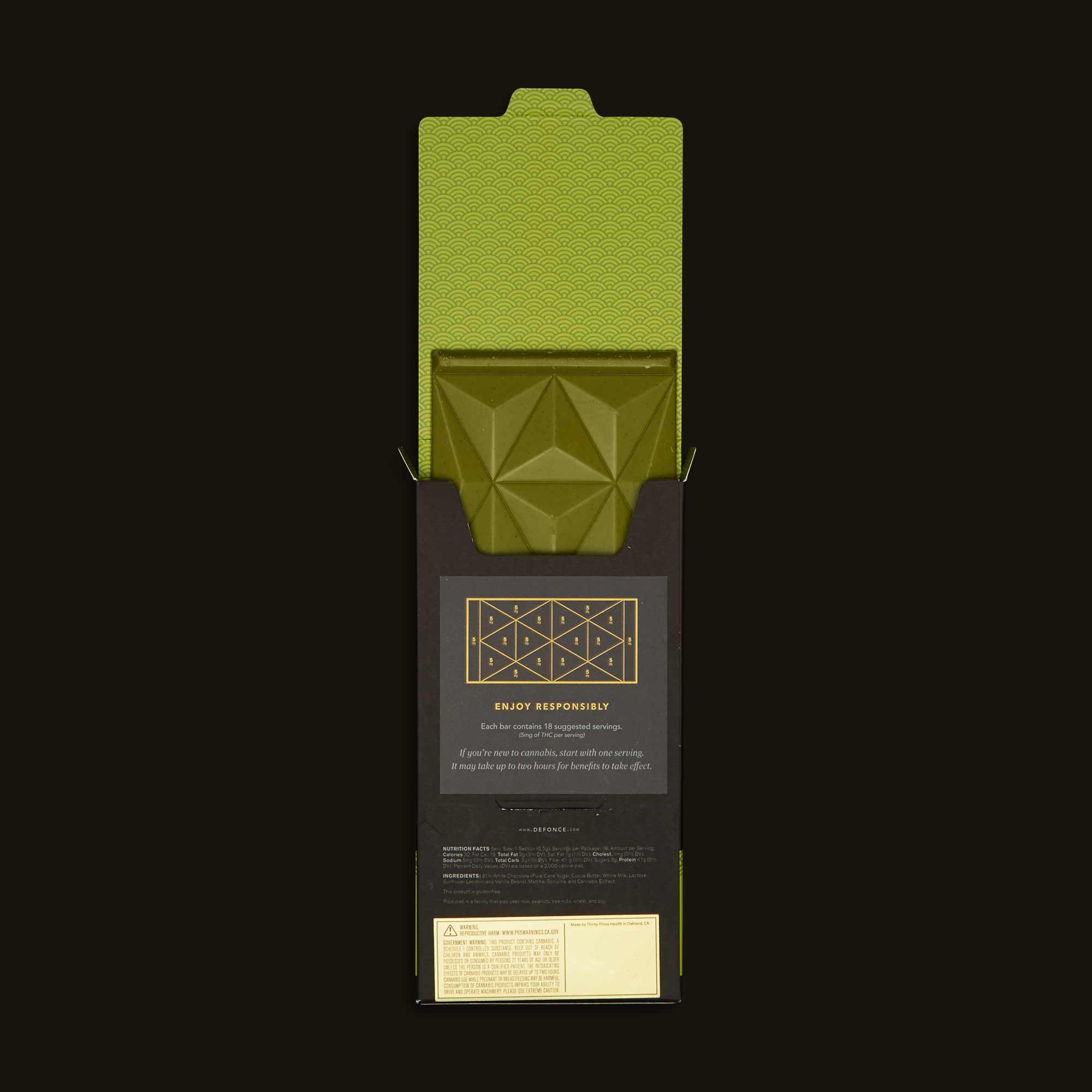 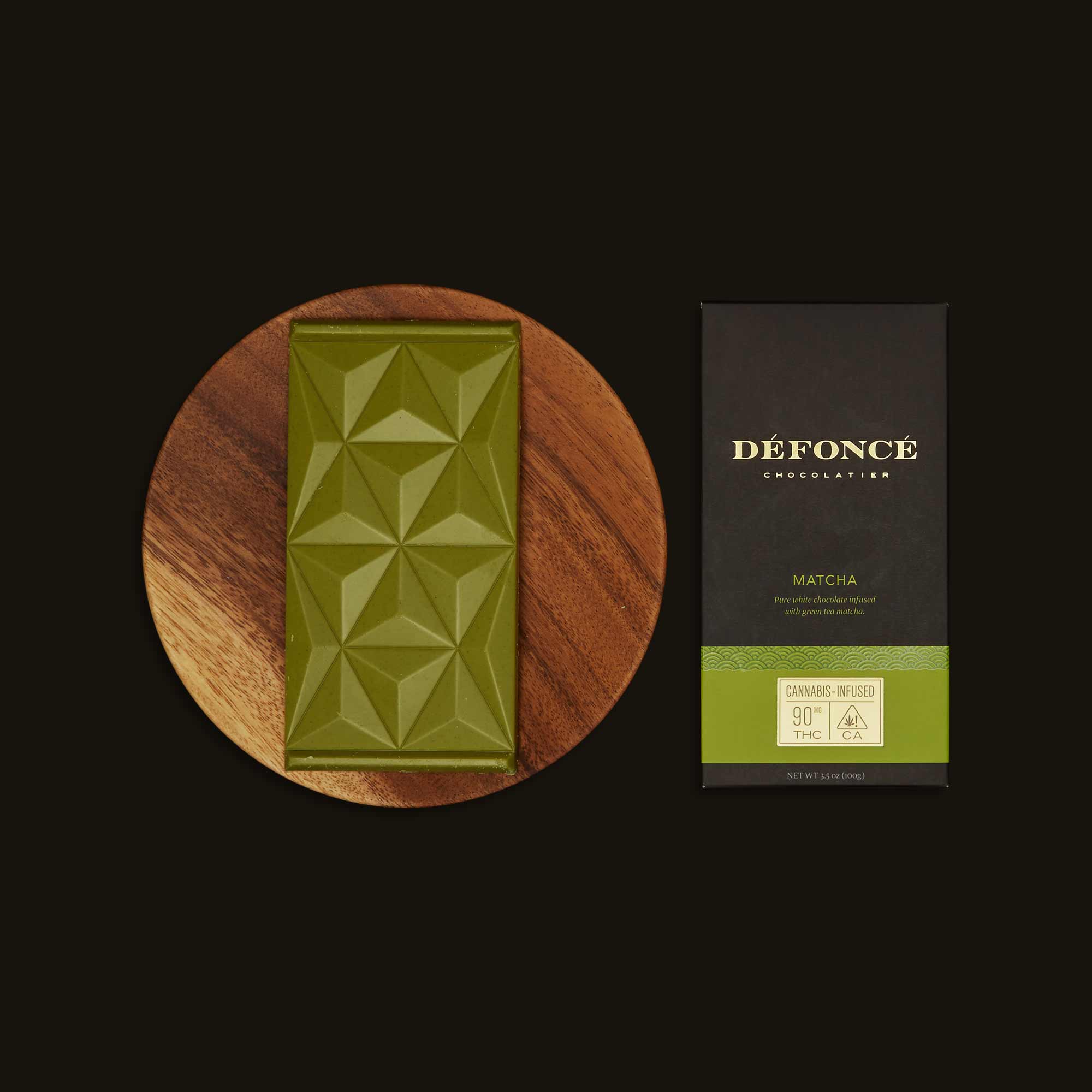 As our committee rates Matcha Chocolate Bar, we capture their experience in real time through our ratings app and report everything back here.

Ranked 32 of 321 in Edibles for feeling Euphoric.

I managed to survive the chaos of Hollywood with a little bit of help from Défoncé.

The hardest part about cannabis journalism is being stoned all the time. Having helmed Merry Jane’s product column for close to a year now, a large portion of my time is spent trying every weed product you could possibly imagine. Powdered THC that dissolves immediately in any drink, foldable latex bongs, space bars, low-dose breath strips, high-dose cotton candy, medicated trail mix—you name it, I’ve tried it.

While I’m not here to complain as this certainly constitutes the dream gig of every stoner ever, I’m exhausted.

Concentrates can definitely fuck up a day, but edibles are the worst. Indica, sativa, espresso beans, whatever—if I'm day tripping, I’m asleep by 3pm. However, the day I dedicated to Défoncé's Matcha Chocolate Bar allowed me some new perspective. What started as shopping for a bikini quickly became the purchase of stripper heels with an existential twist. By the end of the day, I realized the dried flower trapped in the shoe’s plastic heel was a metaphor for my existence, and that not every edible will turn you into a tired puddle of munchies.

Full disclosure: I woke up in a good mood instead of a bad one. Though I was supposed to locate a bikini for the next day’s impromptu sound bath at Soho House’s Malibu outlet, I only had, like, a hundred dollars in my bank account. But the sun was shining and it was warm. Fuck it, I thought, money comes and goes.

“The two 5mg triangles melted in decadence, a perfect hybrid between white chocolate and a leading trend du jour, matcha.”

While waiting in the drive-thru line at Starbucks, I ate a couple pieces of the matcha-flavored chocolate. LA’s excuse for radio stations alternated between two Drake songs, Cardi B, and a bunch of other hits that are neither old enough to be ironic nor new enough to be in a Hot 40 rotation. The quilted pattern of this divine little edible soothed the rage I experienced as “Sorry Miss Jackson” came on for the second time in an hour. Clearly the work of an upscale chocolatier, the two 5mg triangles melted in decadence, a perfect hybrid between white chocolate and a leading trend du jour, matcha.

Out the window, Starbucks advertised matcha lattes. Like cold brew, coconut milk, and nitro, a corporate presence means it’s blown the fuck up. For the sake of clarity, matcha is the finely ground powder of specifically grown and processed green tea leaves, which contain theanine and caffeine, producing a jolt of energy. I received my free Venti ice water, like a broke bitch would. Hair full of coconut oil and wearing a spandex ensemble, I decided to go to the one place I knew everyone would also look like an off-duty stripper: Hollywood Boulevard.

“Instead of the jitters and anxiety I’ve confronted with said canna-caffeinated selections, the matcha offered a sense of balance.”

In the matcha chocolate bar, Défoncé somehow managed to deliver the excitement of a high-dose edible without certain drawbacks like paranoia, insatiable munchies, and unwanted tiredness. A normal edible would have sent me home at this point. Instead, I turned around, beelined back to the mirrored cave of self-realization that is Maya Shoes, and spent my last fifty dollars.

Be the first to review Matcha Chocolate Bar from Défoncé and help others find their high.