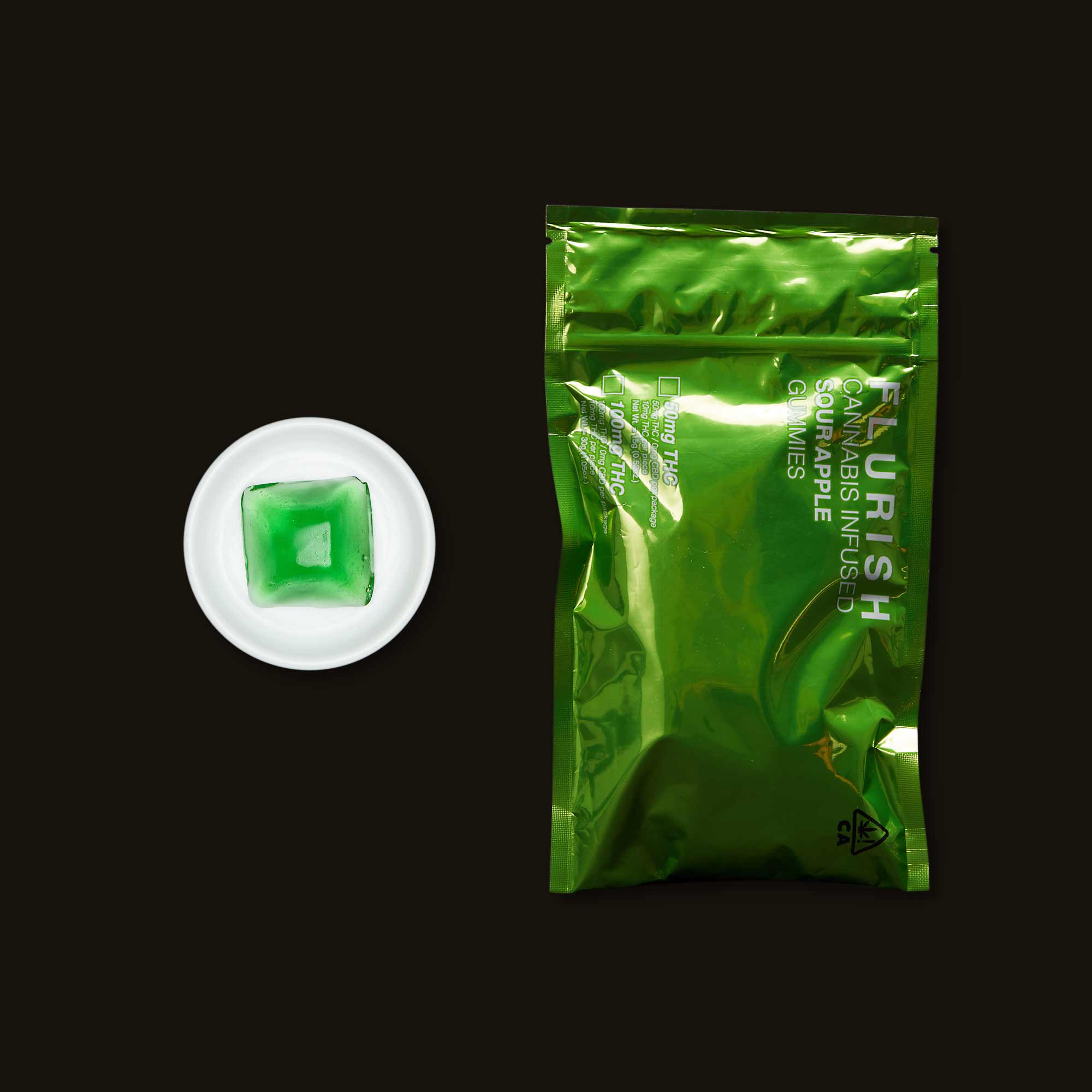 The Hybrid Sour Apple Gummies by Flurish are chewy edibles with a midrange high. These aren't likely to get you crazy stoned, but you won't be sober either. They taste like stale jello, but the high should feel focused and motivated. You might even get a creative spark to fuel you through a new project.

Ranked 28 of 92 in Edibles for feeling Focused. 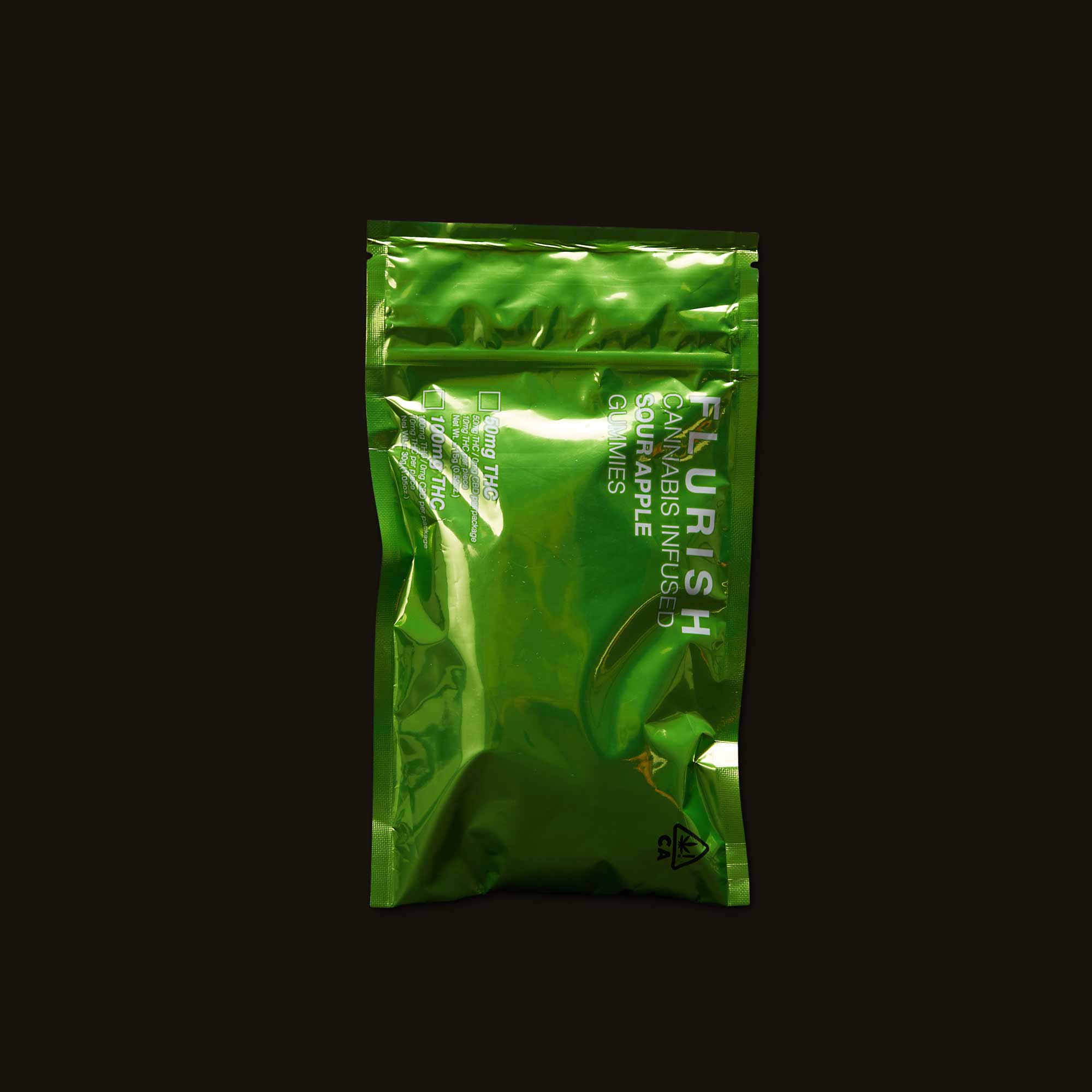 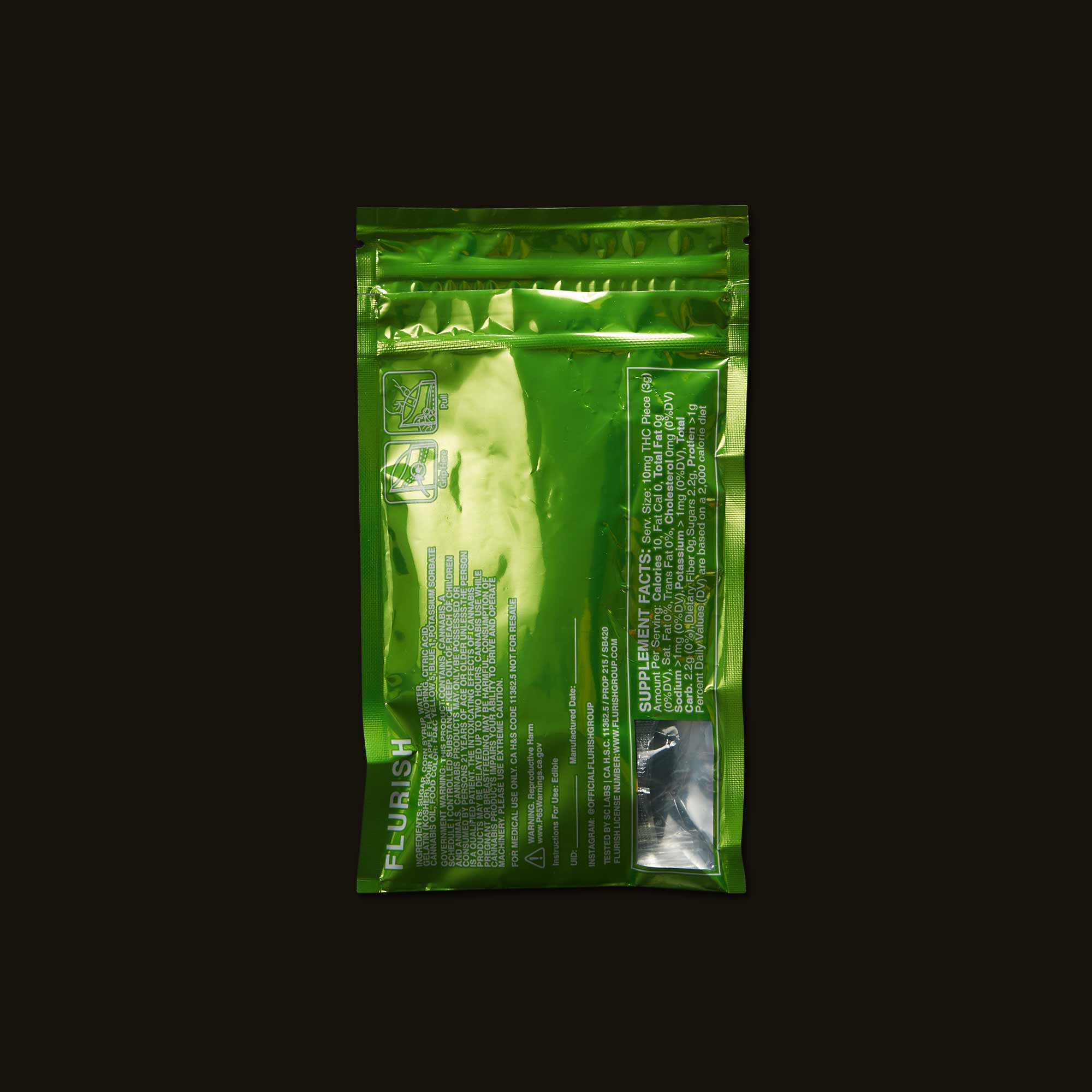 As our committee rates Hybrid Sour Apple Gummies, we capture their experience in real time through our ratings app and report everything back here.

Ranked 28 of 92 in Edibles for feeling Focused.

Jello Shots I Can Get Behind

Texturally these gummies were strange, but high-wise they were just right.

Flurish’s cannabis-infused gummies may not be texturally transcendent, but what they lack in elasticity they more than make up for with an unmatched high that is equal parts creative flutter and focused motivation.

I am accustomed to a particular texture of gummy, shaped no doubt by years of sucking on Haribo Bears, Swedish Fish, and the occasional Sour Patch Kid. I’m into gummies that are firm and springy with a resistance that teases its implied density before giving way like a half-warm pat of butter. I like that tightness, that firm flexibility, and I have come to expect it, which is why my mouth went into temporary revolt when I popped one of Flurish’s sour apple-flavored hybrid gummies inside it. The initial mouthfeel—both stale and loose at the same time, like week-old Jello—was thankfully not indicative of its robust high.

“The roly-poly way it bounced around my mouth was more Jello shot than gummy.”

The familiar, tangy fragrance coupled with the acid-green hue informed my senses immediately that this was a clear-cut sour apple situation. But the roly-poly way it bounced around my mouth was more Jello shot than gummy candy, and all those unambiguously attractive sensory suggestions were expunged as I grimaced my way through the chew-swallow portion of this exercise. At 10mg of THC per gummy, I hoped the payoff would outweigh the goopy introduction. Flurish’s website describes these candies as “handcrafted from scratch by Culinary Institute of America trained chefs.” So perhaps an abundance of culinary education informed this gummy’s, ahem, interesting texture.

The plan for the day was washing, coloring, trimming, and styling my hair. I perform these tasks once every couple months and they can sometimes take two days to complete. They are tedious and exhausting, but I almost always get rip-roaring stoned before I start to make the process sorta fun. I ate this roly-poly edible about an hour before I broke out the bleach powder for my grimy-looking roots, and the timing couldn’t have been more precise. Holding my arms over my head for an hour or more is a guaranteed shoulder ache, but this edible made my limbs weightless.

My arms floated around my scalp, fingers nimbly parting my hair and brushing the myriad of colorful cremes meticulously on only my inch and a half of new growth. That shit is tricky, so nailing it with such precision was immensely satisfying. Furthermore, the energetic focus of this edible prompted me to not just clean up my grisly roots but also paint lowlight and highlights throughout my whole head, refreshing my entire aqua blue afro fantasy with arms, shoulders, and fingers intact and pain-free. Flurish’s Sour Apple Gummies are made with hybrid cannabis oil, and I gotta say, the astute balance of kinetic sativa and pacifying indica was memorably superb. Later that day, I wrote a new daily schedule in my journal that included early morning jogs (HAHAHA). The motivation was real, y’all. Ephemeral but real.

“A morning of longing, grief, and general despair became an afternoon of vibrant creativity.”

On day two of my Flurish gummy adventure, I dealt with some disquieting emotions. I’m at an age where more and more family members are either slipping from this mortal coil or facing the failure of their health. These are things I can’t control, but they often control me, and on day two I was 100% not handling my feels in any type of constructive way. Again, I bounced this gelatinous wad in my mouth first thing in the morning, and within an hour I was channeling all of my fear and anxiety into something I very much could control: music. I sat at my piano and hammered away for what felt like hours. I broke out the Garageband app on my iPhone, threw together a beat, wrote a verse, and recorded a cute little track. A morning of longing, grief, and general despair became an afternoon of vibrant creativity. I played the verse on a loop for a while, stunned that 1) I had made this and 2) that I had overcome deep depression to do so.

This gummy had assuaged my fretful feelings without smothering them in a haze of stoner disassociation. Instead, it gave me the focus and energy to transmute those emotions into something that gave me strength, some level of control over my circumstances, and decisive control of my self. And yo, my hair looks fucking amazing, too.