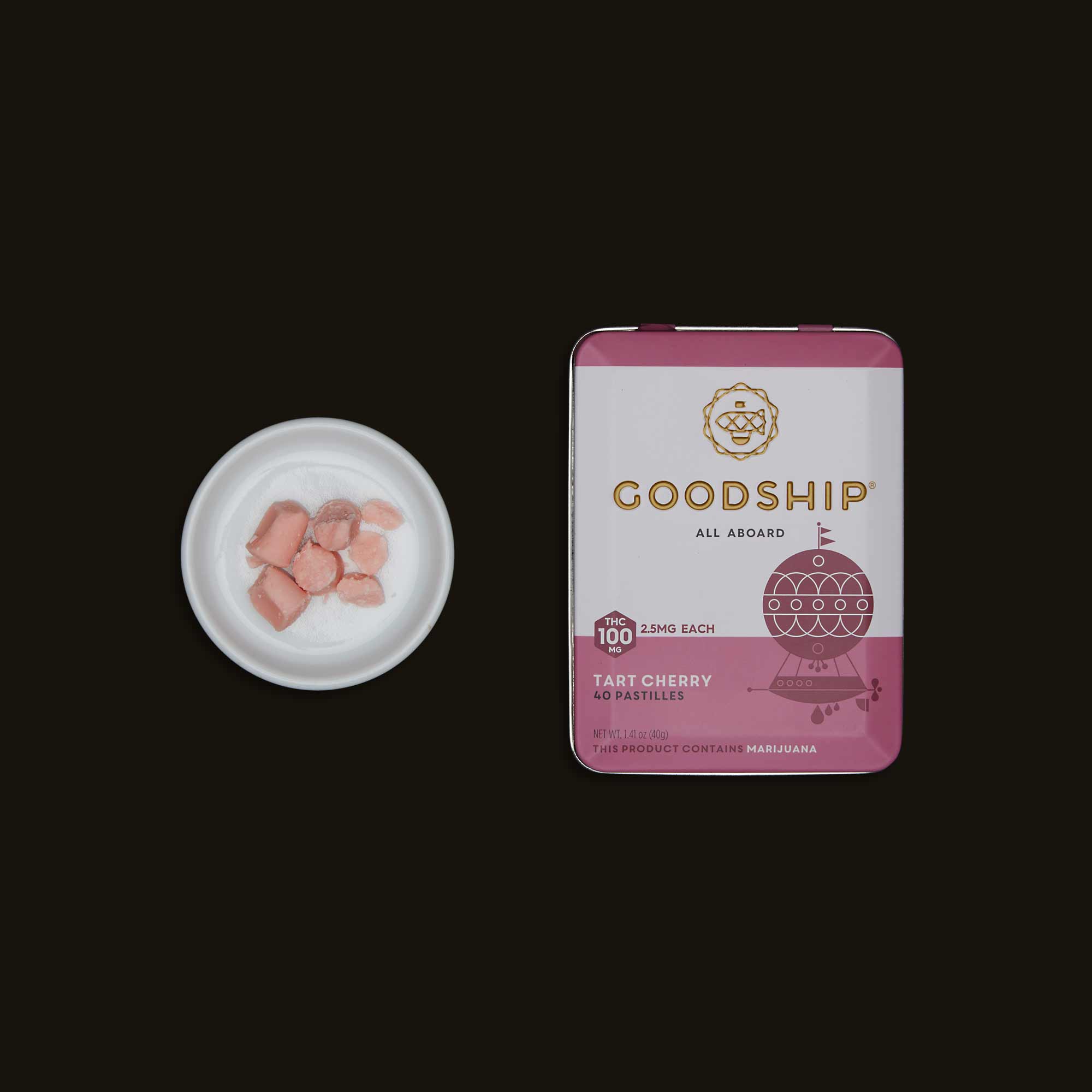 Goodship's Tart Cherry Pastilles lean more on the mild side with a calm, soothing high. They're perfect for outdoor hangouts and gluing together mood boards. There's a social buzz to them that can boost your conversations, but the aftertaste can provoke the compulsion to chug your water bottle. 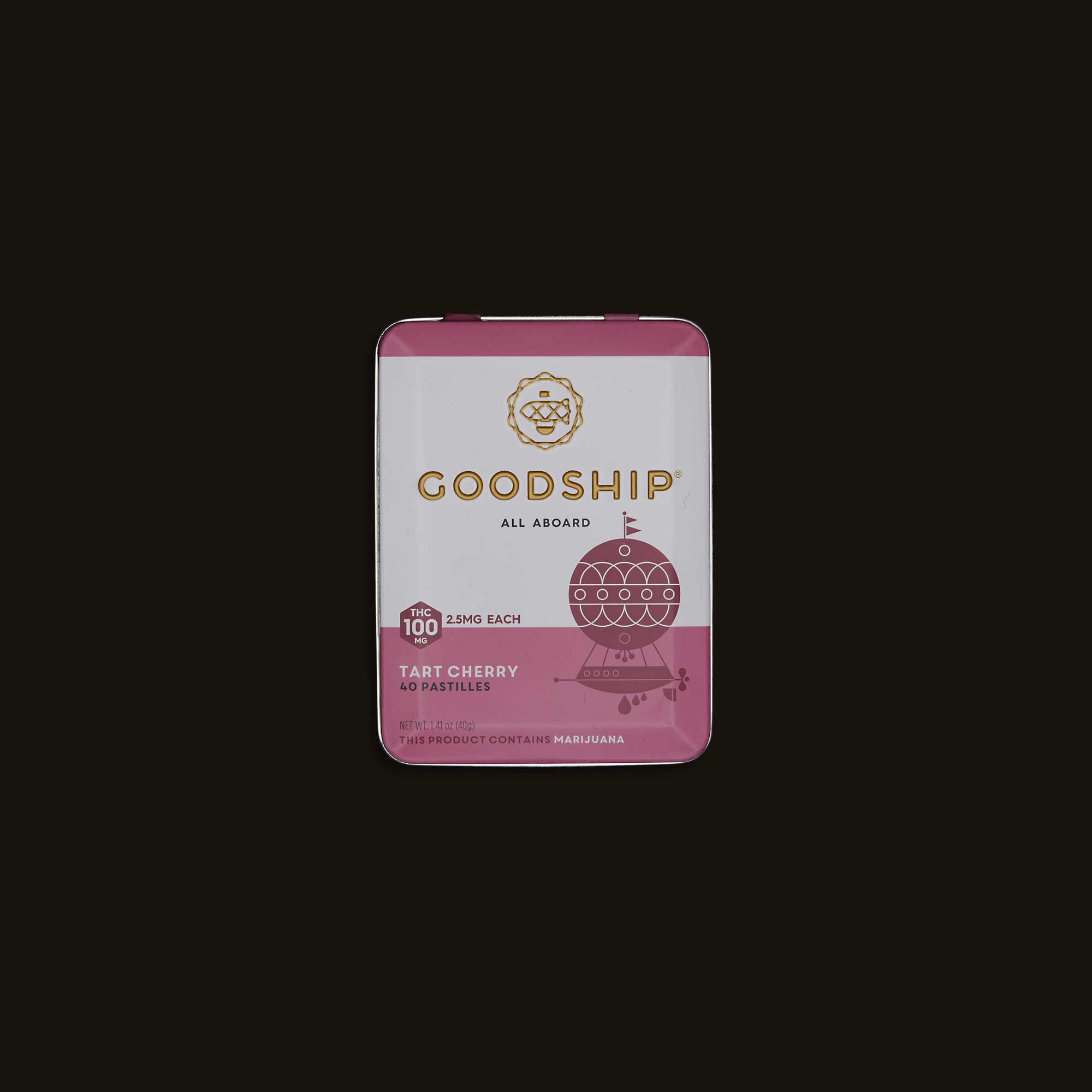 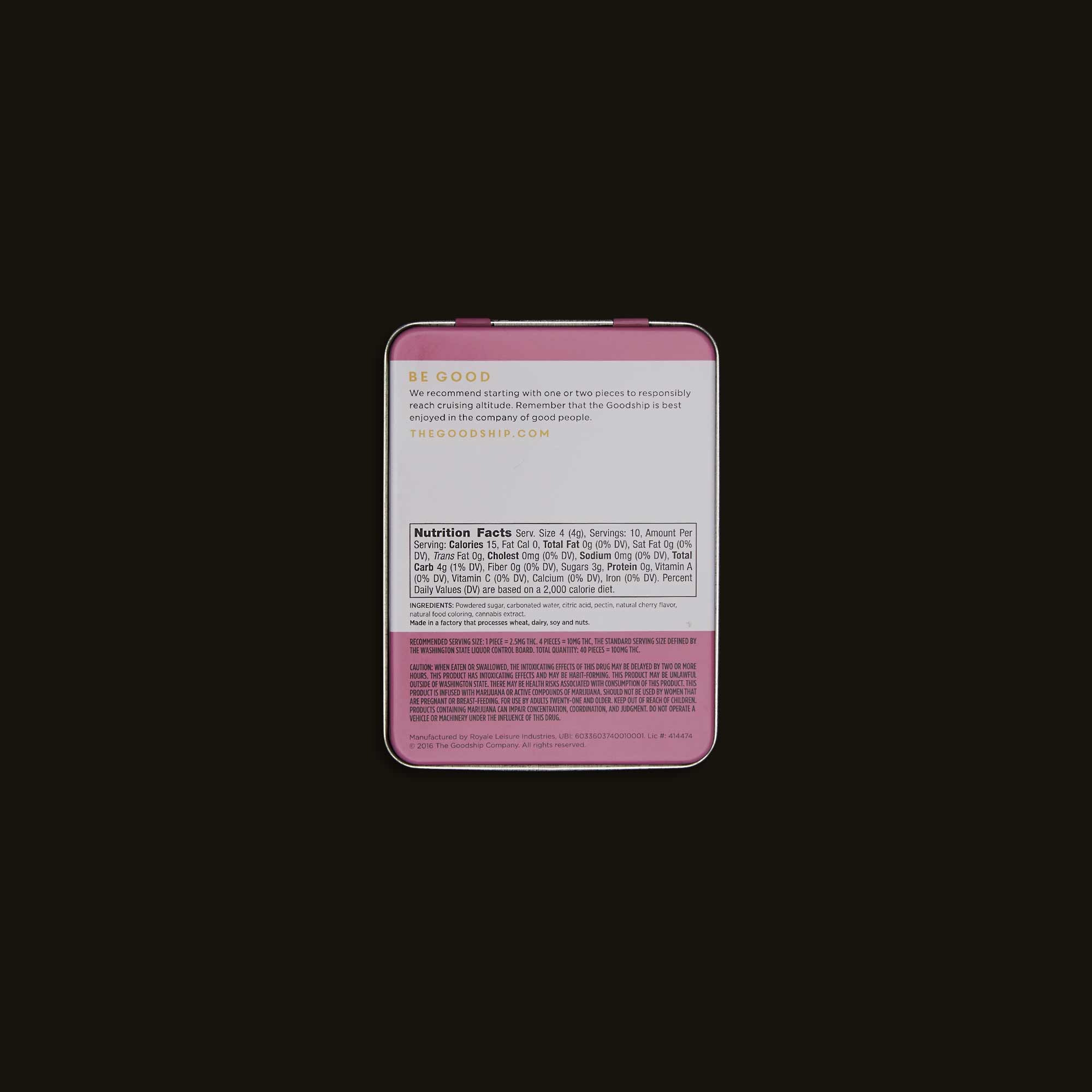 As our committee rates Tart Cherry Pastilles, we capture their experience in real time through our ratings app and report everything back here.

All Aboard The Giggle Ship

Prepare to find everything hilarious.

As a former budtender and cannabis writer, I have sampled a lot of weed in my day. I love the versatility of the plant in all its consumable forms, but my favorite is rolling up beautiful nugs. Joints are my thing, what can I say? That said, I do turn to edibles for sleepless nights, bad cramps, and high-stress moments. Before I tried Goodship’s Tart Cherry Pastilles, I wasn’t experiencing any physical pain or mental disturbance. However, I was feeling a little fatigued, so I decided to see how these edibles would affect my mood and body on a sunny day of running errands.

My first reaction upon seeing these little edibles was, “Wow, these look like drugs!” The four small pink pellets I received looked as though all they were missing was the signature imprint of a dolphin or alien. Like the drugs one might pick up before a rave, they did not seem to be trying to be very appealing in terms of aesthetics, smell, or taste. And like party drugs, they did provide a giddy, uplifting high despite not tasting great.

Goodship’s cherry pastilles smell nothing like cherries and exactly like bubblegum—don’t ask me why or how, but they do. I'm generally not into the super artificial smell or taste of candy, but I was impressed by how much these pastilles smelled like regular bubblegum and not weedy bubblegum. The taste, however, differed drastically from the smell. They tasted as chalky as they looked, and since powdered sugar is the main ingredient, they’re not super easy to swallow. While the pastilles smelled like bubblegum, the flavor was actually that of artificial cherry and citrus. The chalky texture and bitter, artificial taste were not pleasant, and since each pellet only contained 2.5mg of THC, I had to struggle through four pieces to get to my preferred dose of 10mg.

After flushing the aftertaste with a lot of water, I decided to get some errands done and take advantage of the sun before the effects hit me. When the high kicked in an hour later, I was pleasantly surprised. Usually 10mg would be a very small dose for me as a seasoned consumer, and typically I would expect to feel either no effect or only a slight, sedated effect. This edible did provide a noticeable body relaxation. The feeling was more like when you’re coming down from a high and you’re just on the cusp of sobriety except that it was prolonged for a couple hours.

“Almost every joke would make me laugh until I cried. ”

This subtle, relaxed high worked well with my agenda of doing necessary but not strenuous activities. I was able to breeze through responding to texts that had piled up, filling out my day planner for the upcoming week, along with enjoying a good meal and getting some sunshine. I’ll add that the pastilles also left me feeling super giggly—almost every joke would make me laugh until I cried. In my mind, the laughter and clear-headedness offset the unpleasant taste and texture.

When I took a 10mg dose of pastilles at night, I was more aware of the sedating effects and found it helped me ease into a peaceful night of sleep. Although I definitely felt sedated, I still felt noticeably more giggly than usual. I may have dismissed it as late night delirium if my daytime high hadn’t confirmed the results. So, while Goodship’s pastilles don’t have much appeal in terms of texture and taste, they will show you a giggly good time.

Be the first to review Tart Cherry Pastilles from Goodship and help others find their high.