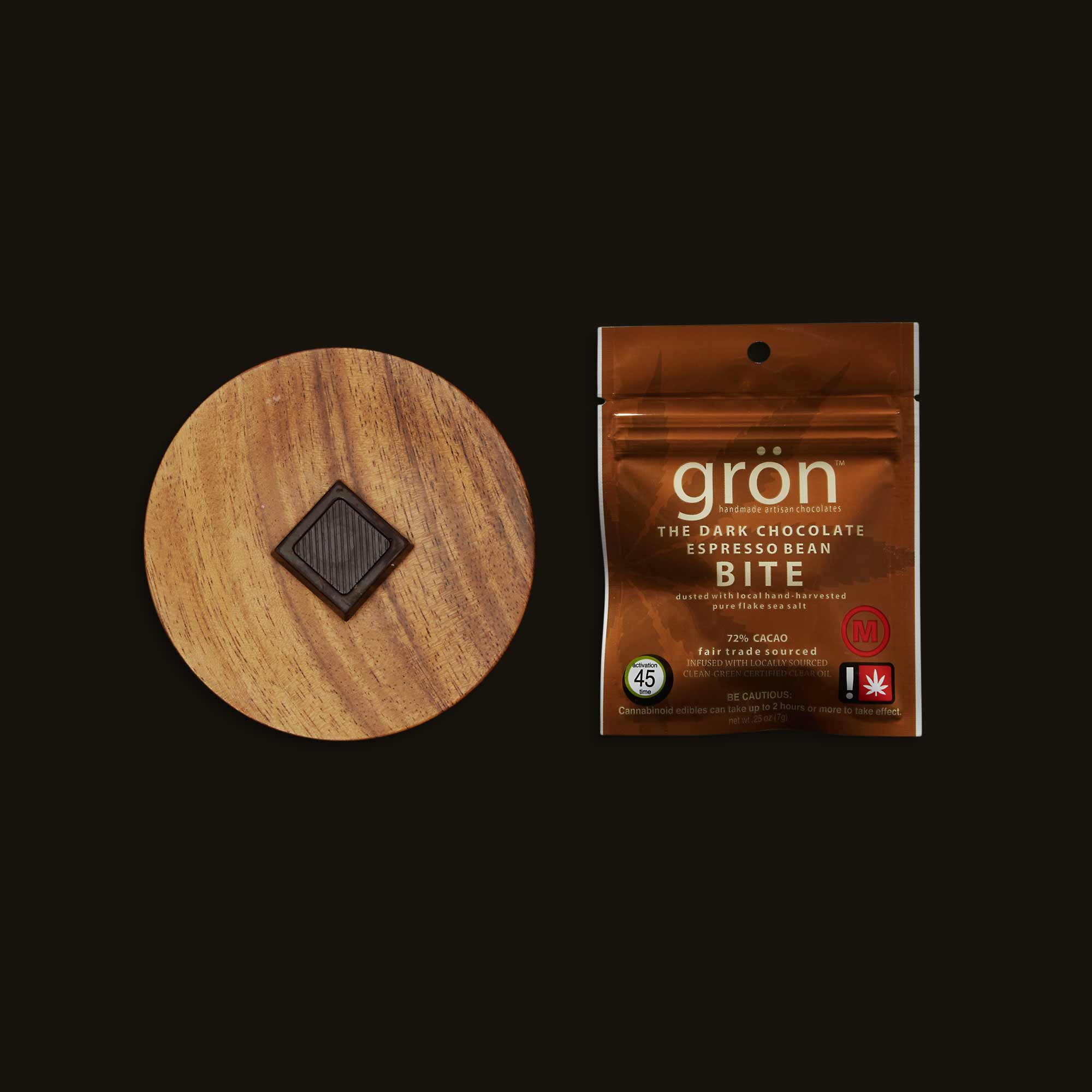 Grön's Dark Chocolate Espresso Bite is pretty dang potent for its size. It has a complex, layered flavor that satisfies. The high can pair with dry mouth, but it's otherwise social and floaty. Pair with a glass of wine and it can hit you like a (very pleasant) train. 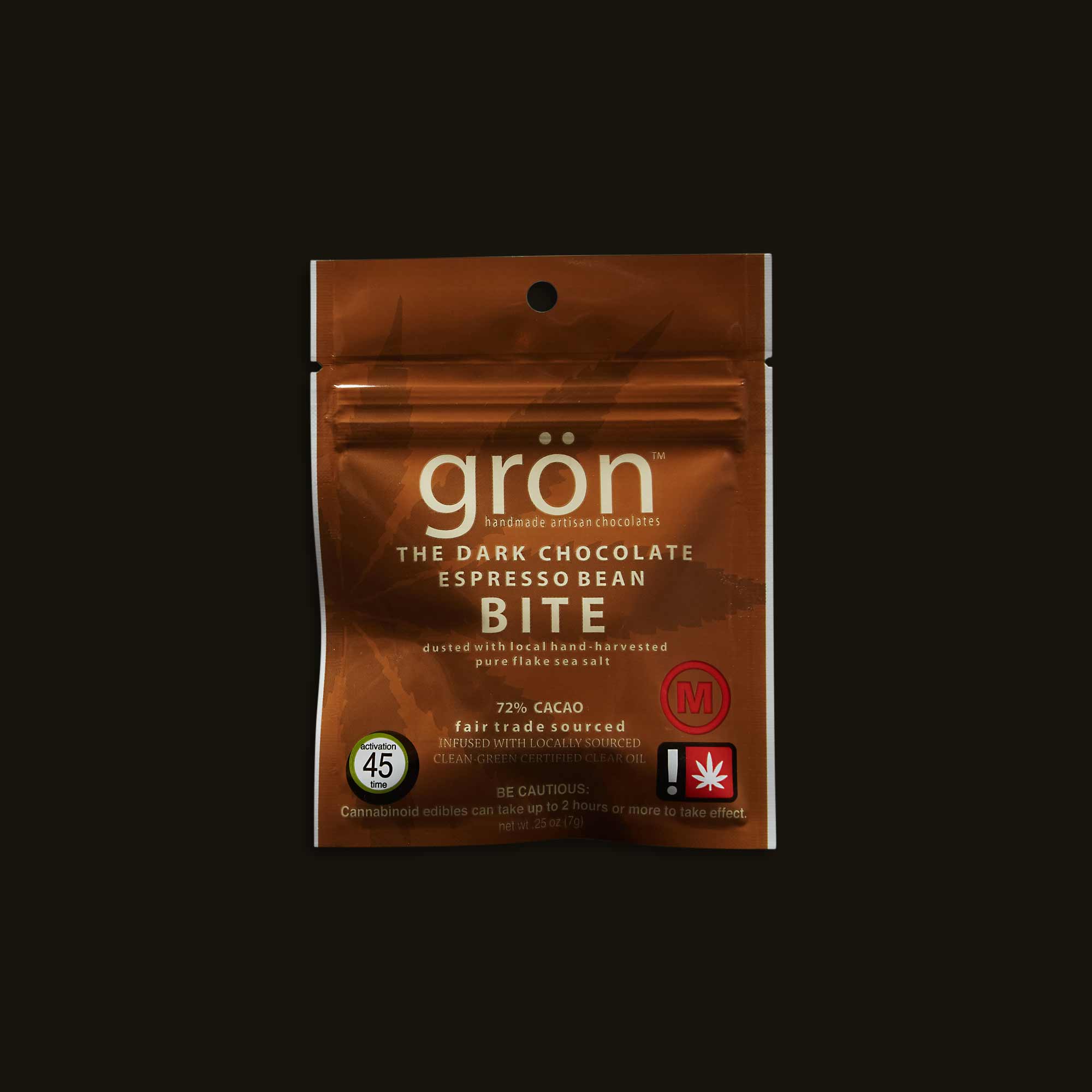 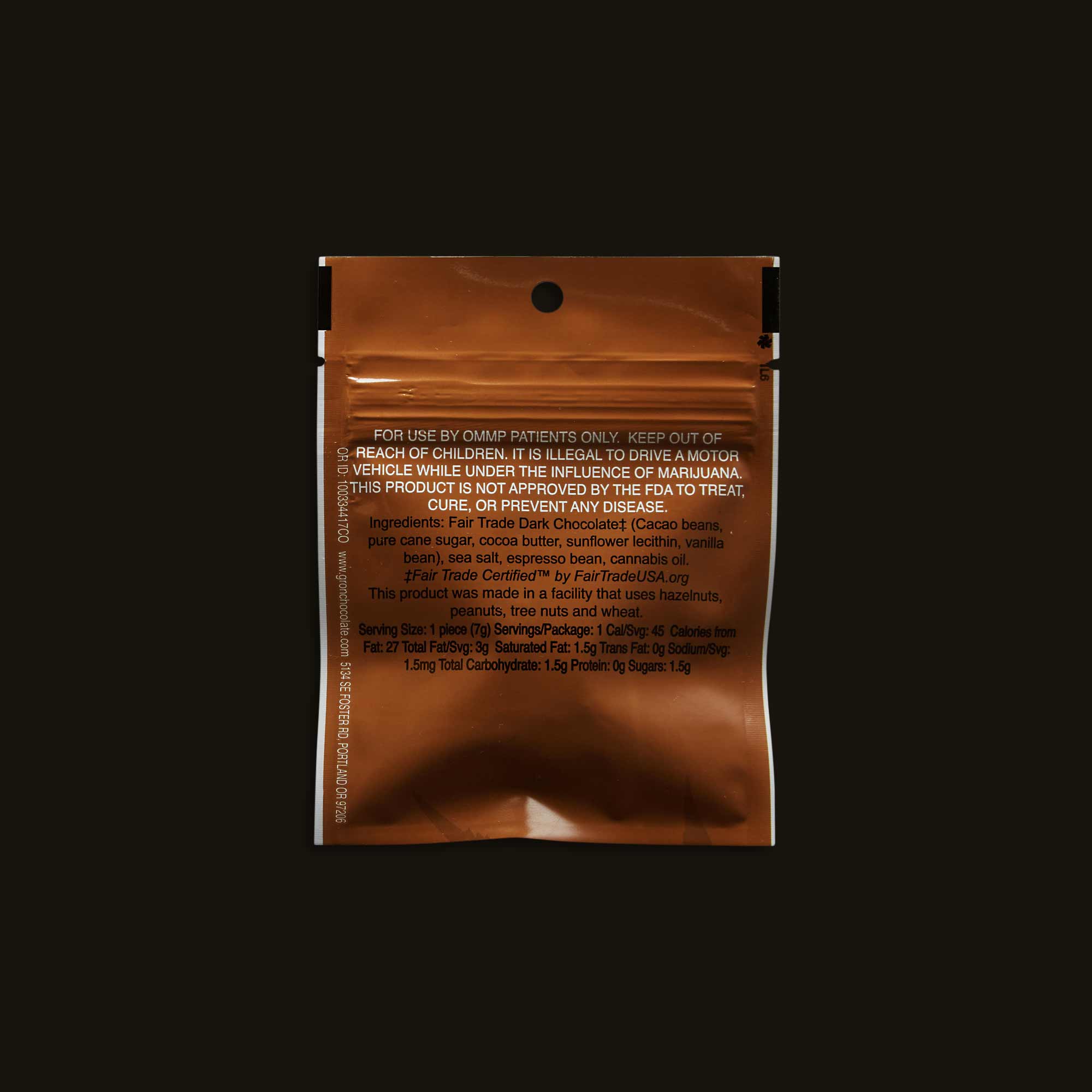 As our committee rates Dark Chocolate Espresso Bite, we capture their experience in real time through our ratings app and report everything back here.

For Once, Size Doesn't Matter

In the world of edibles, intense highs can come in small packages.

Stoned for hours on end with a feeling of being rocked back and forth on a boat lost at sea. Closed-eye visuals with waves of euphoria across my body leaving me glued to my bed. These are just some highlights from my most recent “too high on edibles” experience, a familiar story that’s probably as old as cannabis itself. As a budtender, I hear all about people’s hilarious and sometimes scary accounts of eating a homemade brownie that led them astray, whether it’s a 12-hour night of sleep or some sort of cannabis-induced panic attack. Most famously, a police officer in Michigan who had been confiscating weed and baking it into brownies called 911 in a state of dread, stating he and his wife were having an overdose. Even though it’s physically impossible to die from consuming too much herb, I can certainly empathize. Although I didn’t feel compelled to visit the emergency room after deciding to give Grön's Dark Chocolate Espresso Bite a whirl, I did have an incredibly powerful experience that left me with a better understanding of what it means to overdo cannabis.

“Its smooth and lush mouthfeel combined with expansive notes of dark espresso graced my palate immediately.”

As you’ve probably heard, the days of grass-flavored, randomly dosed edibles are long gone. In Oregon’s modern cannabis market, all edibles are tested by state-approved labs to make sure they are accurately dosed and do not exceed 50mg of THC per container, which is the current cap. Medical patients needing a stronger dose of cannabinoids work with a limit of 100mg of THC per package, but me being a recreational customer, it’s very rare that I indulge in a high-dose edible. I have neither the medical need nor built-up tolerance to comfortably consume edibles past a 30mg threshold—and I work with weed everyday! To put things even more into perspective, I generally recommend new users consume between 2.5 to 5mg of THC and wait an hour before taking more for their first experience with edibles.

Still, I’ve had my fun with high-dose edibles in the past, so I'm no stranger to the long-lasting, heavy effects they usually produce. Grön is now a well-known brand to most Oregon cannabis consumers for good reason. Crafting exquisite, artisan-style chocolates that are mostly unmatched by other weedy bars, their attention to detail and quality truly makes them a stand out among the hoards of candies competing for attention at dispensaries. Grön’s Dark Chocolate Espresso Bit is no exception—as long as you don’t eat the whole thing in one sitting like I did.

For me, summer days off mean taking large dabs and skateboarding in the warm, Portland sun. Wanting a little tasty treat and a different intake method, I thought that on one such Saturday afternoon the Grön espresso bite would be just the thing. Medically dosed with 70mg in one small bite, this chocolate packs a heavy punch of THC—that’s at least 14 servings for new or infrequent users crammed into one small bite. Not only does it hit hard, it’s also jam-packed with flavor. Produced responsibly with 70% fair trade dark chocolate and a perfectly placed espresso bean in the center, it oozes decadence. Its smooth and lush mouthfeel combined with expansive notes of dark espresso graced my palate immediately upon tasting. But that’s right about where the smooth and subtle part of my journey ended.

One hour after I ate the whole bite, I began to feel strong waves of euphoria wash over me, leaving me feeling extremely content. As I watched A Scanner Darkly, an animated movie about drug dealers and undercover cops, I began to feel the sensation of being rocked back and forth like a ship lost at sea. This slightly uncomfortable but tolerable feeling subsided after a half hour and a few gulps of water, but to say this edible is strong would be an understatement. Make no mistake: unless you have a medical condition that necessitates such a high dose, these espresso bites are more like THC bombs that’ll have you melting into your furniture. Unsurprisingly, the high felt like too much for the first few hours, so when the movie came to a close I decided my best bet would be to sleep it off. But as soon as I went to bed, colorful geometric patterns began filling my head. Oh yeah, I thought, this is what it’s like to be way too super duper stoned. Playing music until I finally drifted off into the night was the only solution I could think to help me ride out an otherwise insane high, and it worked like a charm.

“Oh yeah, I thought, this is what it’s like to be way too super duper stoned.”

Needless to say, this is an edible for only the most seasoned consumers—recreational and medical alike. If getting high as heck is what you’re looking to do, this tasty confection will do the trick and then some. I could see these espresso bites being perfect for those with insomnia and can imagine people with pain issues finding a ton of relief from Grön’s high-dose offerings. Even if you’re not looking to take a medical-grade dose, the bargain factor could alternatively make higher dose products more attractive. One of these 70mg squares will only set you back about $15 at most dispensaries—a real steal if you have a high tolerance or even a tolerance in the 20-30mg range and a desire to chop the chocolate up.

For people not as familiar with edibles or cannabis in general, do everyone a favor and stay far, far away from these unassuming squares. Why risk an overwhelming, potentially panic-inducing high when Grön has a bunch of other products at more reasonable doses? It's safe to say Grön has a chocolate to satisfy even the pickiest of edible consumers, but it’s up to us to know our limits and avoid edible disasters.