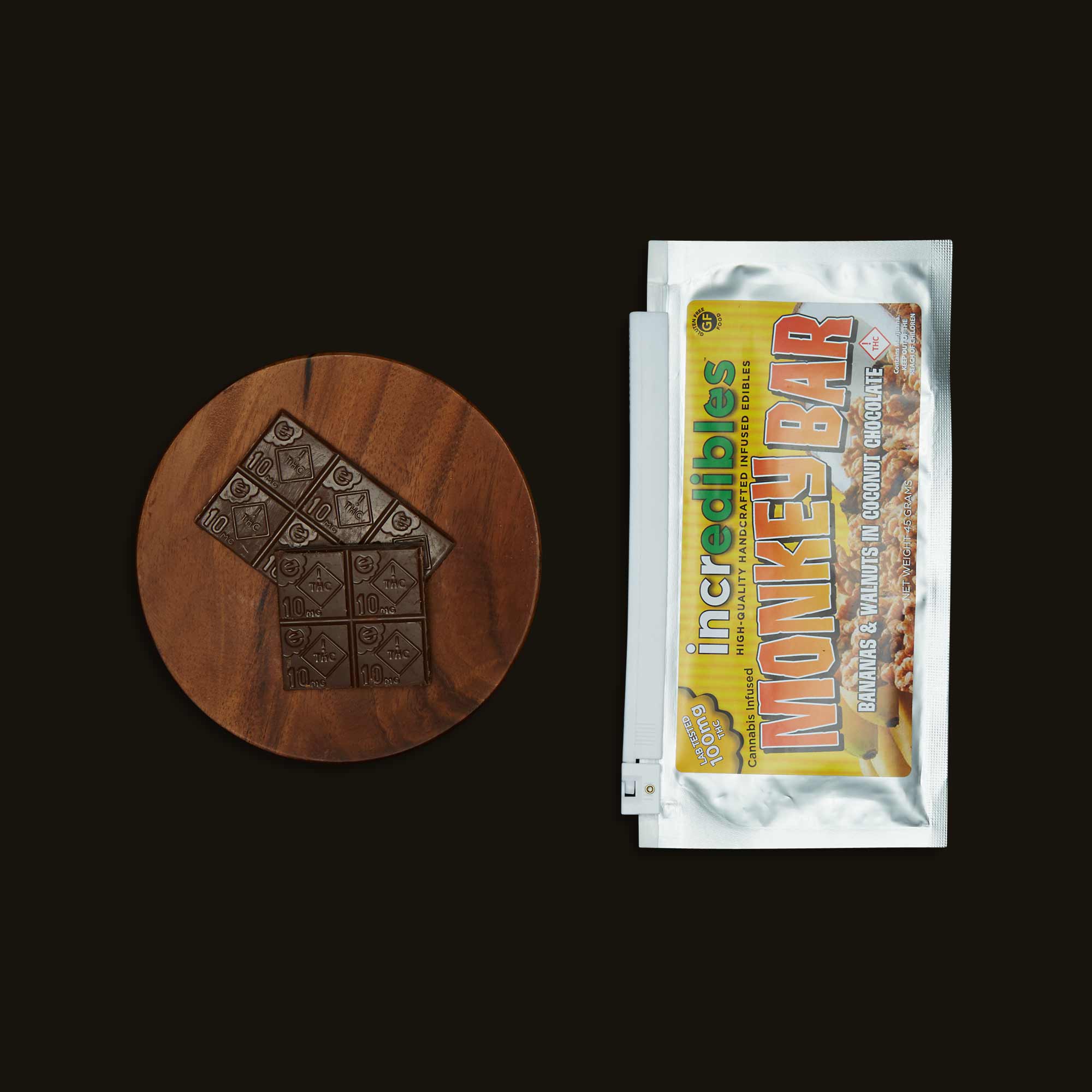 The Monkey Bar is a chocolate edible loaded with bananas and walnuts, but the taste is more average than it sounds. The high is usually potent and euphoric, with a soothing buzz in the body. A lot of people get past the lame flavor when they start to feel comfortable in the high.

Ranked 143 of 171 in Edibles for feeling Euphoric. 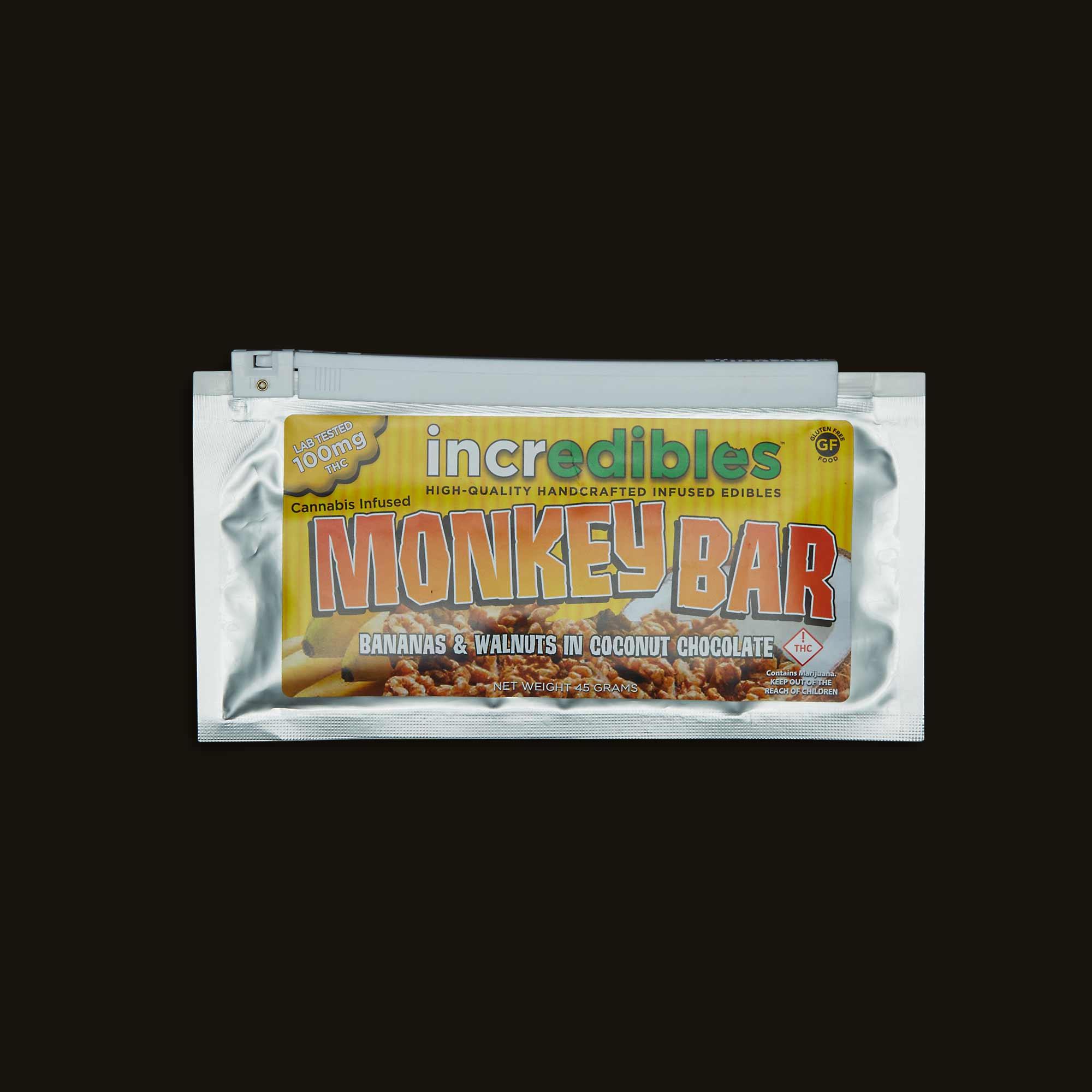 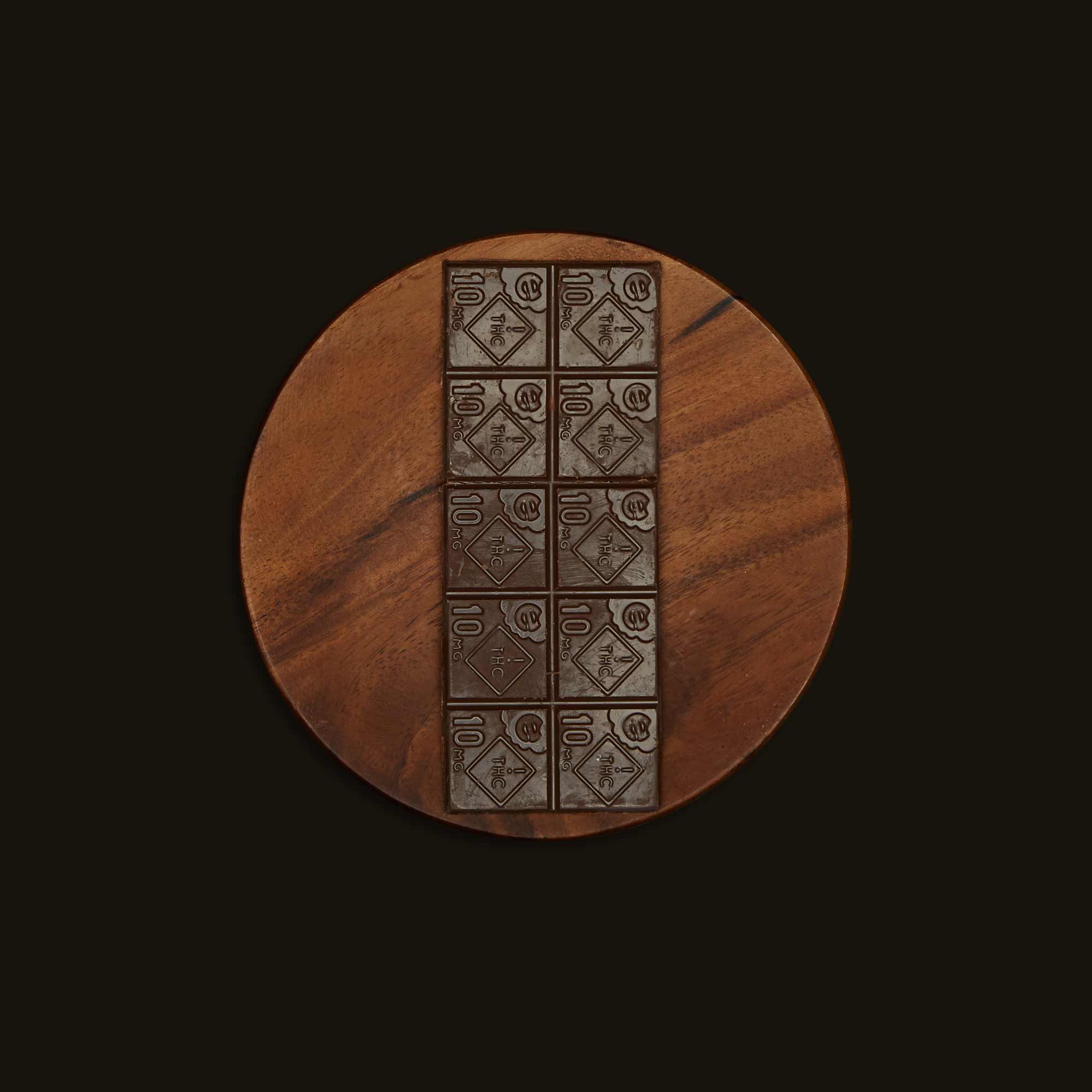 As our committee rates Monkey Bar, we capture their experience in real time through our ratings app and report everything back here.

Ranked 143 of 171 in Edibles for feeling Euphoric.

An Uplifting High That Tastes Like Toys 'R' Us

The taste may turn some off, but the upbeat high is well worth it.

There’s something special about being super hyped for a product only to have it let you down like a broken Ferris wheel. To my dismay, incredibles’ Monkey Bar did just that. As a Ben & Jerry’s Chunky Monkey enthusiast, I thought for sure this was going to be a memorable experience. What followed next could only be described as an investigation into what it would taste like the love child of chalky bananas and plastic chocolate.

“I know this might sound melodramatic, but I seriously wanted to gag.”

My dreams of a perfect banana-walnut chocolate bar were immediately crushed upon first whiff. Perhaps I was so disappointed precisely because I have an affinity for incredibles’ products and have admired their business for a long time. But I have to be real with you guys; I’ve never been so turned off by a product before even consuming it. I didn’t even want to eat the chocolate at that point, but have no fear, I didn’t let my hard edible testing job get the best of me. I popped the chocolate into my mouth and stomached through the next 30 seconds. Lo and behold, the taste was worse than I imagined. I know this might sound melodramatic, but I seriously wanted to gag. This brought my tastebuds right back to memories of strange, knock-off candy brands one might find in their Halloween bag in the ‘90s. Not only did the banana taste like it was mixed from a chalky powder labeled “banana substance,” but the chocolate tasted like straight plastic.

There are two saving graces of the Monkey Bar. The first was that the aftertaste didn’t linger. If you do find yourself curious enough to take a chance on this chocolate bar, I would highly recommend a chaser. The second redeeming quality it that the high is mellow and consistent. The first time I tried this chocolate, I went out for dinner with my mom. She even tried some of it, too, and had the same experience as me: disgusting to consume but fun to be high on. We went out for Thai food and talked about the difference between edibles and smoking. It was a super weird experience since I was literally getting high with the woman who used to ground me for getting high. Oh, how the tables have turned.

I also ate some during my weekend job at a quiet boutique in Aspen. I found myself filled with joy, which is exactly what incredibles claims the chocolate will do. At no point did I feel too high to help customers, so I managed to avoid any awkward encounters. At the peak of my high, I legitimately enjoyed folding clothes, which—believe me—is not something I normally enjoy doing. When sober, I can usually be found behind the desk watching Netflix, sipping on a Diet Coke, and avoiding doing any work at all costs. So much for the lazy stoner narrative, am I right?

“So much for the lazy stoner narrative, am I right?”

Look, the Monkey Bar isn’t for everyone, but it might just do the trick if you enjoyed the taste of homemade soda kits as a kid or Easy-Bake desserts brought to you by Toys ‘R’ Us and packets of mysterious powders. The taste might also be your cup of tea if you enjoy Banana Runts but wish they had more of a plasticy flavor. I can’t imagine there are many adults out there who would enjoy such an oddly sweet and tangy banana-flavored chocolate, but what do I know. For some edible consumers, the taste hardly factors into the equation.

I will say that the thing incredibles really nails is consistent dosing. I have tried most of their gummies and tarts and have always been impressed with the evenness of the high. I took 5mg of the Monkey Bar for my first session and 10mg of THC for the second. The increased dosage didn’t make a huge difference in head or body sensations, and in both instances the high started creeping up at about 45 minutes. The high consistently peaked about 90 minutes after consumption, which is pretty quick for a chocolate. The high itself was consistent in its rise and fall, which lasted about three hours total. While the strength the Monkey Bar felt appropriate for the dosage I took, new users should know I am used to 10mg of THC often lasting for four hours or more. So even if you’re used to higher dosages in the 10-20mg range, I’d always suggest starting small and working your way up.

Ultimately, there are way too many great weedy chocolates on the market for me to recommend this one in good conscience. With that said, incredibles does make some pretty delicious candy that will deliver an uplifting high—I just can’t get over the Monkey Bar’s bewildering taste.