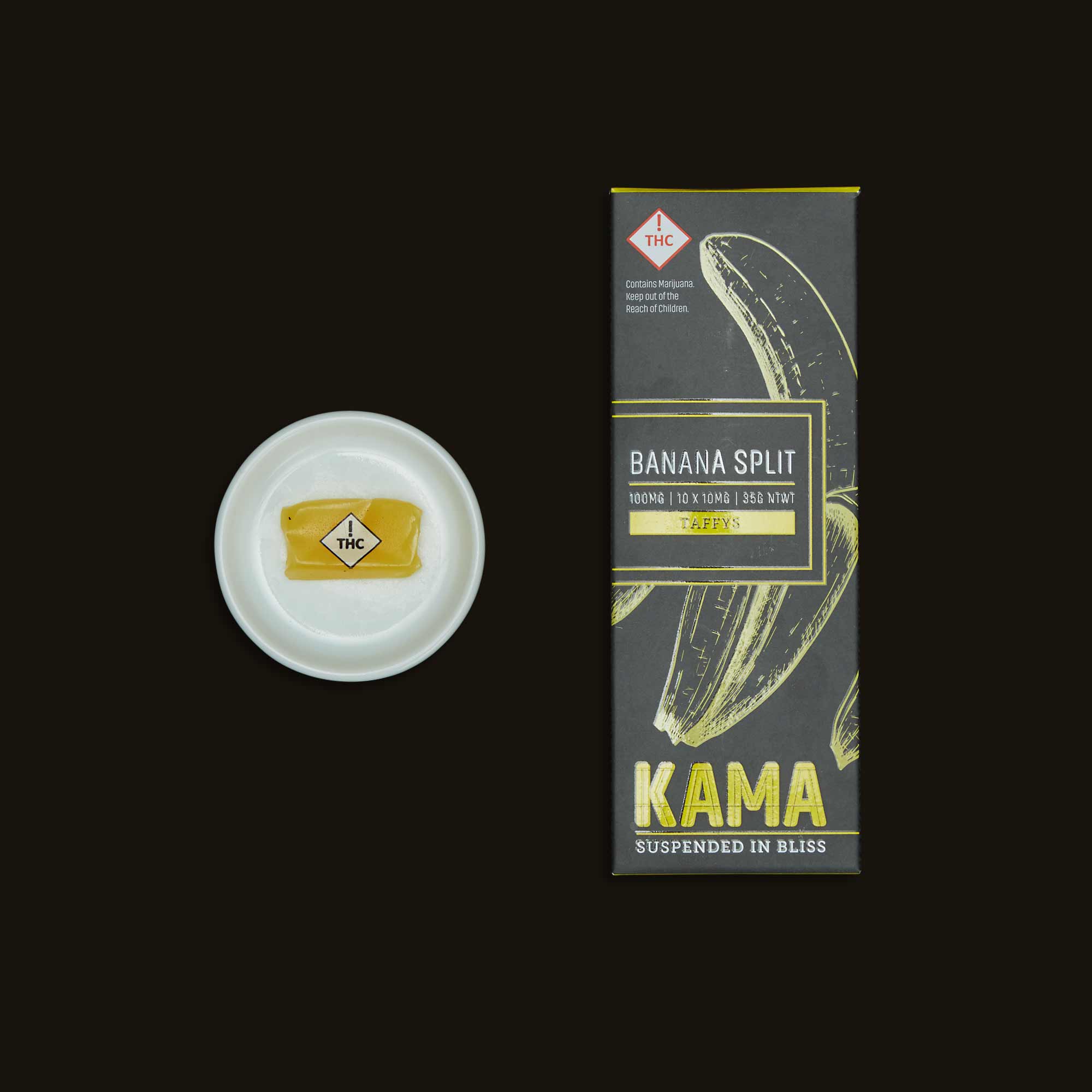 KAMA's Dessert Taffy Banana Split is the perfect edible for watching throwback movies on the couch. Don't be too hesitant when you catch the quick whiff of plastic coming from this candy. The flavor is similar to a banana Laffy Taffy in a very nostalgic way. Enjoy one of these (or half if you're new to cannabis) on a rainy day or when you want to reach into the deepest depths of your childhood.

Ranked 89 of 224 in Edibles for feeling Relaxed. 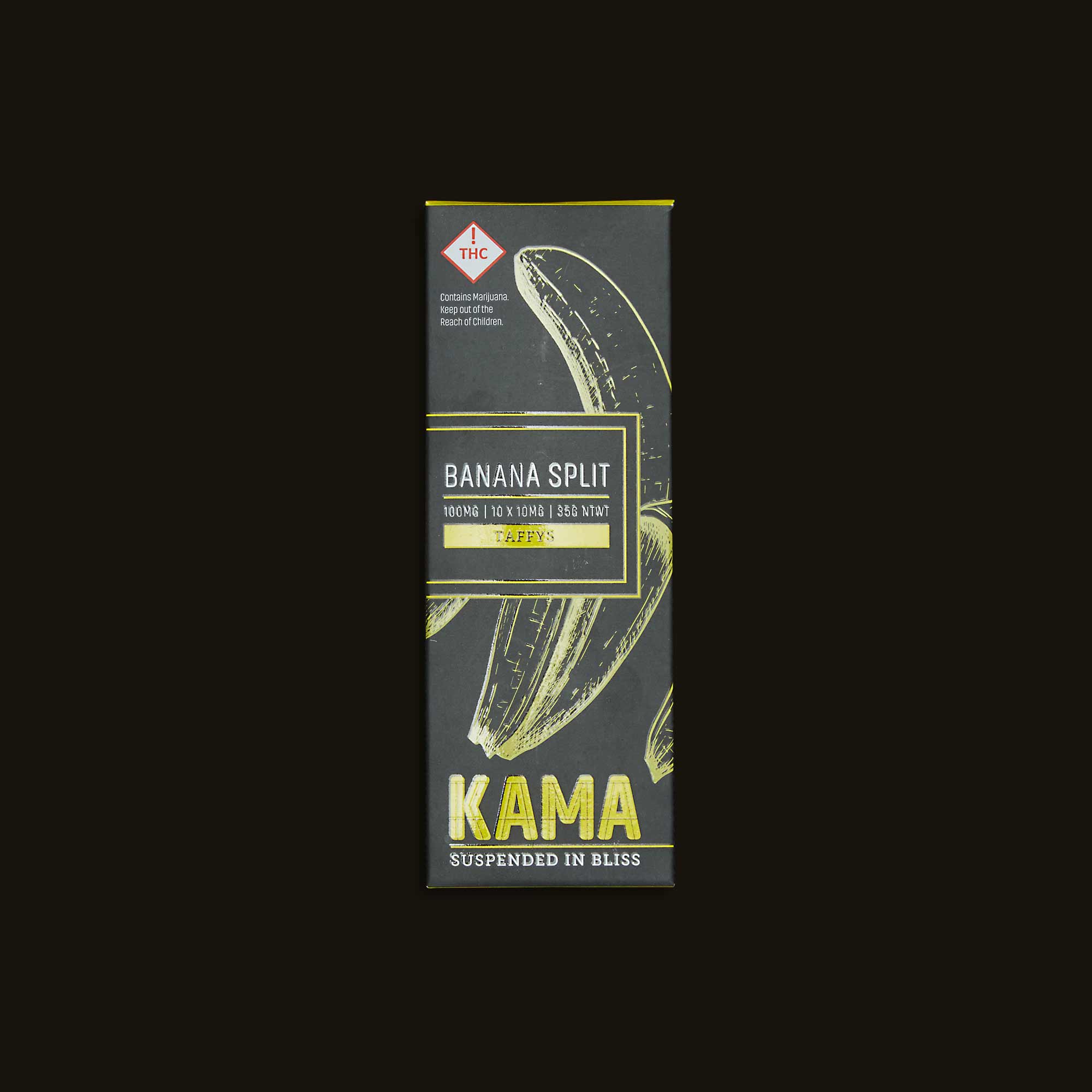 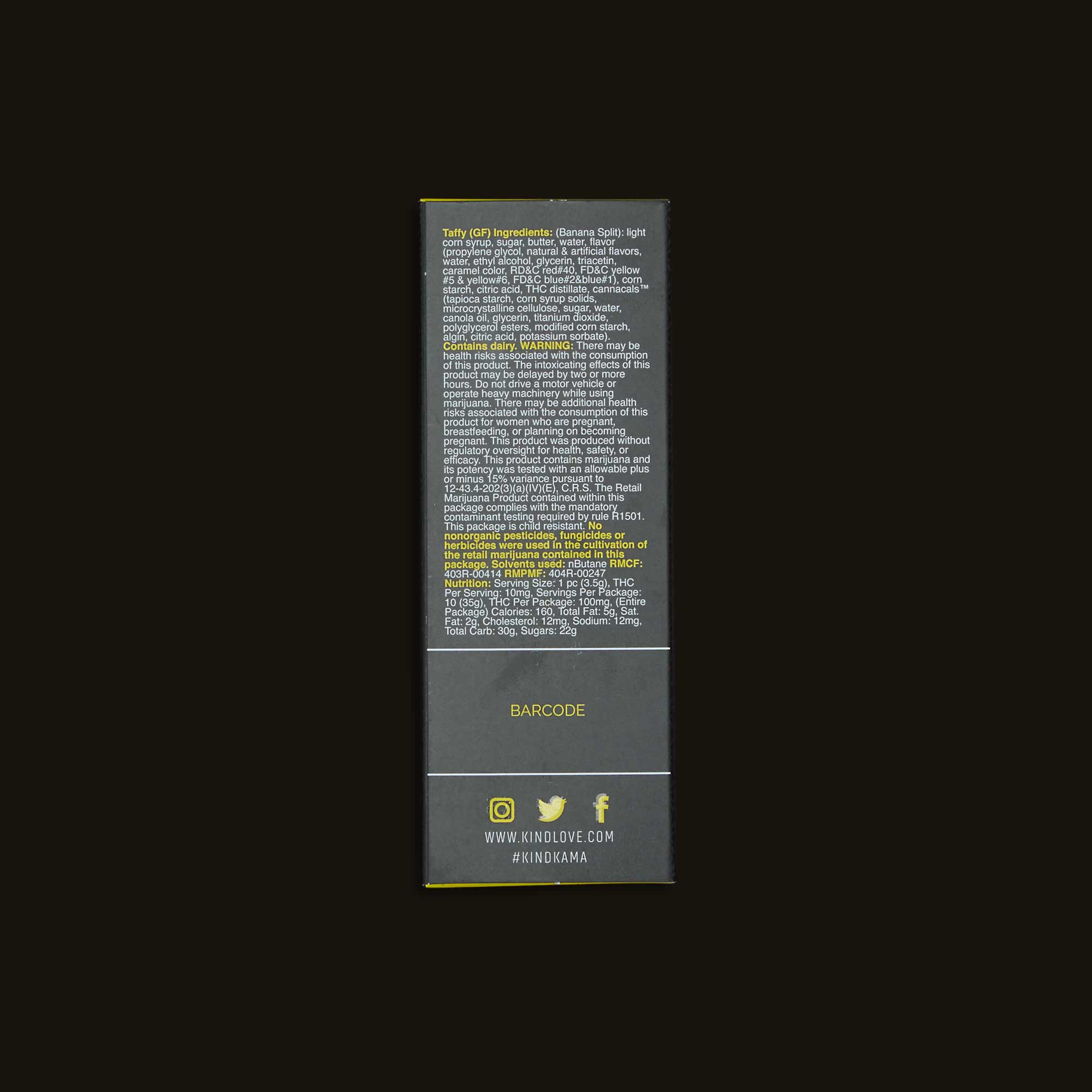 As our committee rates Dessert Taffy Banana Split, we capture their experience in real time through our ratings app and report everything back here.

Ranked 89 of 224 in Edibles for feeling Relaxed.

This Taffy Was Made For Chilling

Banana splits. Throwback vibes. Mellow effects. What more could you ask for?

If you’ve read any of my previous reviews, you’ll know I’m a big fan of candy with nostalgic vibes. You’ll also know I love it when a weedy candy can provide some other benefits beyond nostalgia. I’m happy to report KAMA’s banana-split-flavored taffy has a throwback taste that will melt aches and pains almost as quickly as it dissolves in your mouth. While this sweet taffy has an indica profile that makes it better suited for couch-time activities, there are couch-locked to-do lists you could easily crush with this candy. Like, in my case, binge watching a Netflix original series and eating greasy food.

“The flavor immediately transported me back to my grade school's lunch hall.”

But my experience didn’t start out so blissfully. Upon first opening this little taffy, I noticed it smelled like plastic. I was immediately underwhelmed and was expecting a less than enjoyable experience. In fact, a lot of the edibles I’ve been testing in Colorado smell vaguely of plastic. This might have something to do with the new THC stamp every THC-infused edible is now required to have, but I can’t say for sure. This product is also available in California, and I’d be interested to see if the smell varies in each state. It’s also been my experience that you can’t always judge an edible by its smell, so I went ahead and popped half of the 10mg candy into my mouth. The flavor immediately transported me back to my grade school's lunch hall, where banana Laffy Taffy was like pure gold when it came to lunchtime bartering. I forgot how much I enjoy the taste of synthetic banana because this taffy was delicious. Beyond taste, it was perfectly chewy, dissolved evenly, and didn’t get stuck in my teeth. This was a plus because as a grown-ass woman with no health insurance, I try to avoid dentist appointments like the bubonic plague.

I tested KAMA’s Dessert Taffy two separate times. Both times I was incredibly sore but for very different reasons. The first time was hangover related, and I was uncomfortably nauseous. The second time, I was more somatically sore after going to the gym for the first time in six months. Both instances resulted in a good ol’ fashioned Netflix and food binge on the couch. Thanks to the soreness and taffy, I successfully completed the second season of GLOW, which I highly recommend. As an ‘80s baby who grew up in the era of wrestling mania, I appreciate the modern, feminist perspective on the expectation for women to be sexy even when they’re doing something as physically demanding as wrestling. Without getting into any spoilers, GLOW also does a fabulous job tackling topics that can divide us as women and ends each episode with a perfectly sentimental lesson on the power of women united. Like Banana Split Taffy, the show is a throwback of a good time that makes for a match made in couch-locked heaven.

“I did end up eating a burger in the middle of both sessions, because why change up a good thing?”

When it comes to trying an edible for the first time, I will typically never take a full 10mg of THC the first go-around. In this case, that turned out to be a wise choice. Not necessarily because the high was too strong, but the comedown made me incredibly drowsy and I had to take a nap after both sessions. Half of a taffy—or 5mg of THC—proved to be the ideal amount to relieve my aches and pains without taking me over the edge psychologically. The peak of my high set in around two-and-a-half hours in and stayed put until the effects wore off about four hours later. Somewhere around the three-hour mark, the munchies kicked in hard. I craved foods that were as heavy as my body felt. I did end up eating a burger in the middle of both sessions, because why change up a good thing?

Other than the smell being a little off-putting, these candies are a high-quality sweet I will definitely be trying again. As with any edible—sugar-laden or otherwise—be careful not to overdo it. I also wouldn’t recommend this particular candy if you’re planning on being at work where you have to be awake and focused. This is a zoned-out, couch-locked kind of high that is more “rainy day” than it is “getting shit done.” KAMA did the edible and pain relief world a good deed when introducing their Dessert Taffy Banana Split. Just be sure to have some snacks handy when you embark on this banana-flavored adventure.