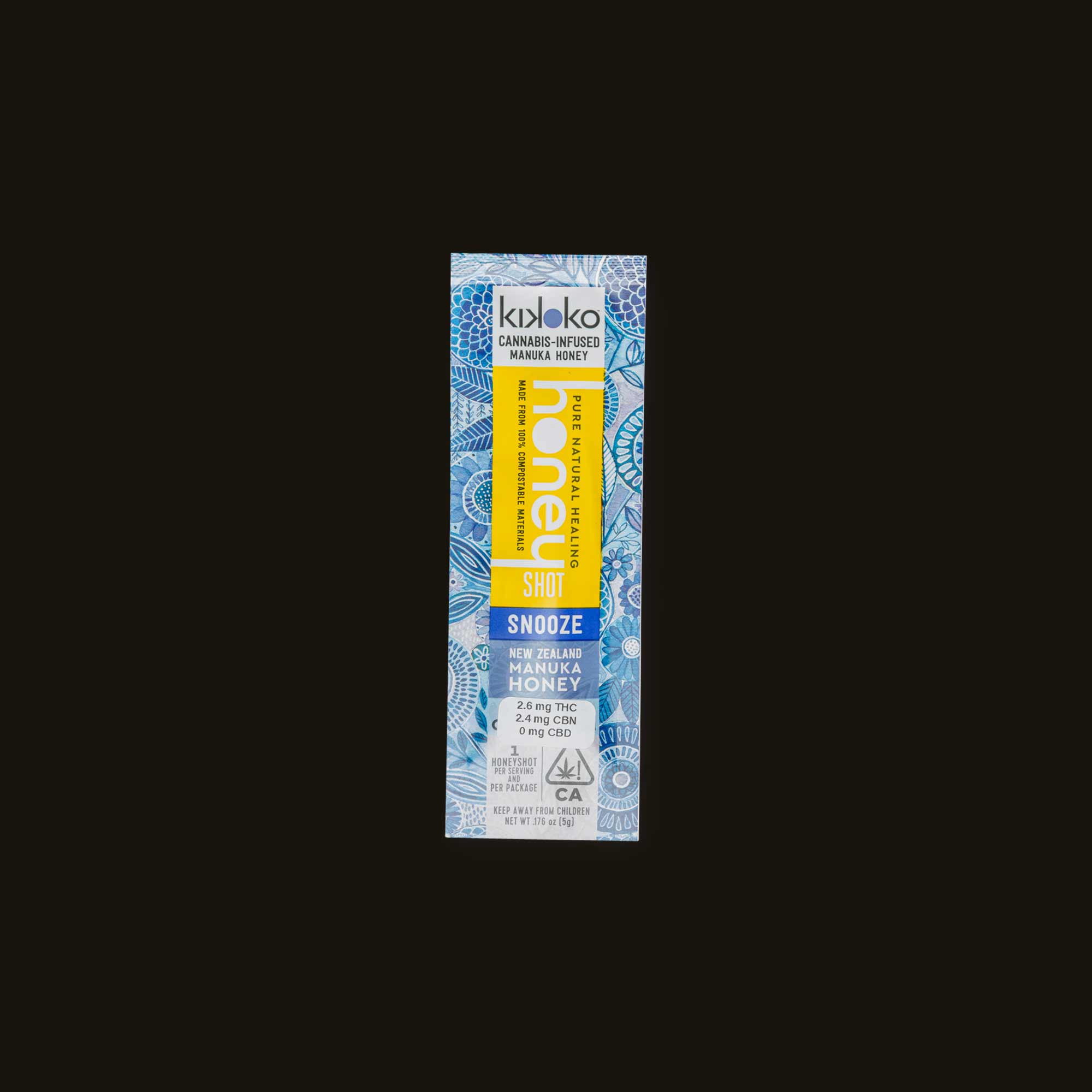 kikoko's Snooze Honey Shot is a single dose of cannabis-infused honey that intents to lull you into a peaceful sleep. It's mellow but effective enough to benefit any level of tolerance, and its sweetness goes well in a cup of tea or on some toast. It's honey. Take it straight on if you want. The sleepy sensation should eventually relax you and weigh down your eyes. Near-instant knockout.

Ranked 7 of 338 in Edibles for feeling Relaxed. 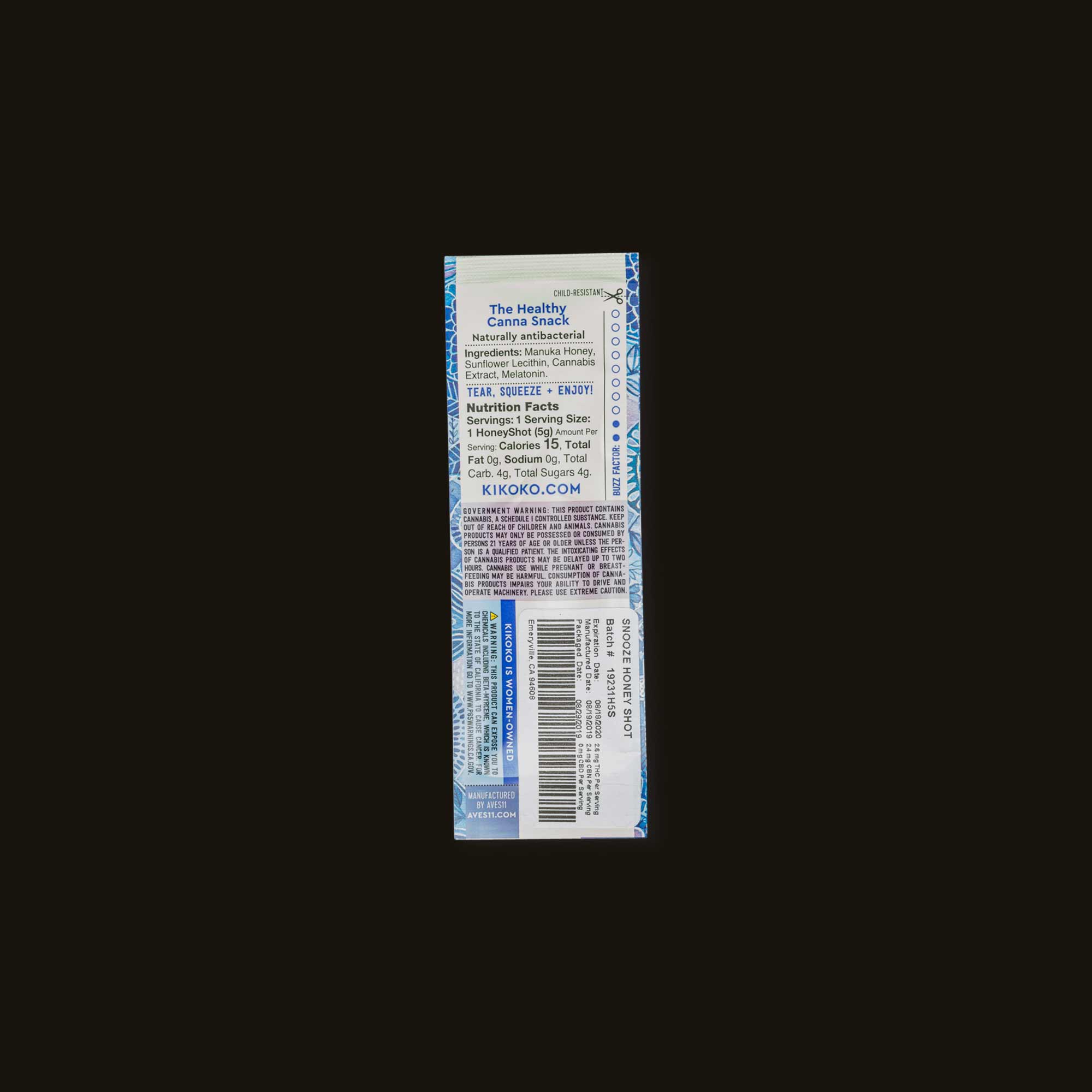 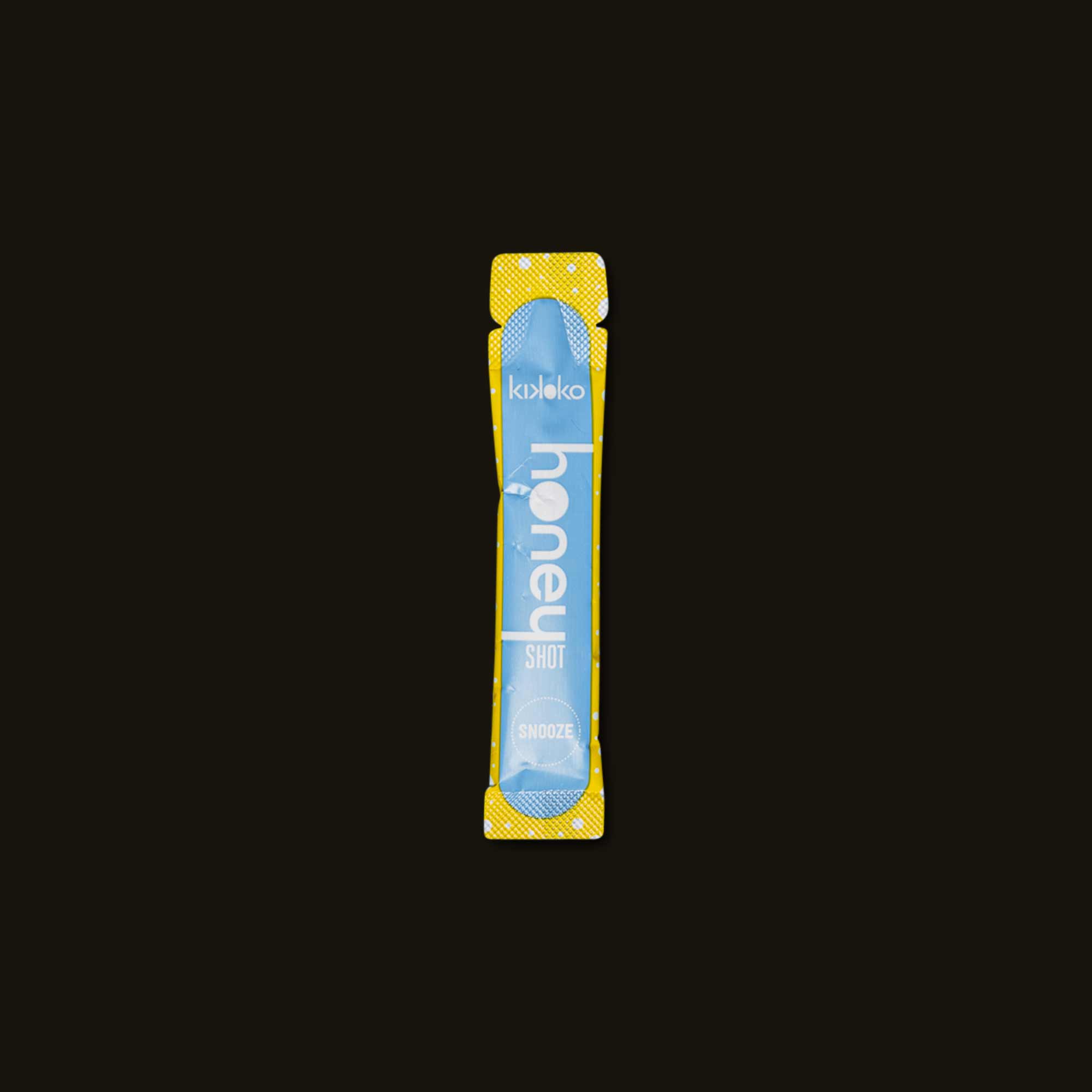 As our committee rates Snooze Honey Shot, we capture their experience in real time through our ratings app and report everything back here.

Ranked 7 of 338 in Edibles for feeling Relaxed.

Honey, I Shrunk My Problems

IN REVIEW: Kikoko is a woman-owned brand that focuses on sustainability and sweet highs. Each of these sticks has a unique cannabinoid concentration that’s coupled with real honey to provide targeted effects in the healthiest way possible. Grab their BUZZ shot to get going, their CALM shot to settle down, their FOCUS to finish a project and their SNOOZE to find some zzz’s after all is said and done. They’re discreet and shelf stable, so stay stocked and stay high while flying under the radar.

The marriage between cannabis and honey seems like a logical one. And here we have nature’s healing synergy divided into four separate medicated honey sticks. Each one is made with genuine Manuka or Kanuka honey, and infused with either THC, CBD or both.

I wanted to space out all four HoneyShots evenly to give each one the attention it deserved. I woke up early and headed to the never-used china cabinet, where relics and tchotchkes from both my wife’s and my grandparents lie. If I was gonna get high at 6:30 in the morning, I wanted it to be from the rim of a five-ounce teacup and saucer, fashioned in the preferred Baroque style of Austro-Hungarian nobility. I squeezed a 10mg New Zealand Manuka Buzz honey stick into my dainty cup of Earl Grey, and I used a comically tiny silver spoon, emblazoned with her majesty’s initials, to stir it with. I wistfully looked out the window and sipped my morning tea, as I waited for the BUZZ to make itself known to me.

“I fell into a six-mile flow state that saw me reach a local vista and back in record time.”

It took nearly 25 minutes for me to feel a gentle wave of euphoric energy, but it was enough to encourage me to put some running shoes on and head outdoors. This was just the sort of morning pick-me-up I was looking for. It did an able job of getting me out of the house and onto the hiking trails at an early hour. For 10mg of THC, this honey stick packed a hefty punch. The birds seemed to be singing a little louder than normal, the rabbits appeared more fleet of foot, the ground itself seemed to contract under my feet and the greenery of the shrubs and palms was pulsating a shade greener. I fell into a six-mile flow state that saw me reach a local vista and back in record time. I was on total autopilot.

The weather had been hot, and I’d logged in a strenuous workout with the aid of the energizing BUZZ stick. After a quick shower, I was then looking for something to ease me back down to neutral. The CALM honey stick seemed to do the trick. With 10mg of CBD, it made for a suitable post-workout choice. I stirred it into my second cup of tea for the day. This time I opted for some mango ginger tea, and drank it out of another teacup bequeathed by somebody’s late grandmother. This one was decorated with green vines and purple leaves. Very tasteful. When my wife came downstairs, she asked if I was having a tea party with the Mad Hatter, and I thought that she got in a good one there.

Before long, I was properly relaxed and put at ease. I watched a documentary about cults while I chopped up a pineapple. It tasted heavenly. The CALM shot did a surprisingly good job of helping me build up an appetite and cope with some nagging ankle pain.

After a large lunch, it was time to get some work done. I could think of no better Kikoko HoneyShot to devour than the aptly named FOCUS. This one packed in six more milligrams of CBD and 2mg of THC, and unlike the other three, is made from Kanuka honey. Never being the type to eat honey straight, I mixed this selection in with my third cup of tea. This time I chose a brand that had a picture of some aristocrats on it, surrounded by what looked like an ill-tempered horse and pack of beagles. I quietly wondered if I should gather up all these old teacups and get them appraised on Antiques Roadshow.

I then looked up the Antiques Roadshow website, and spent the next 15 minutes watching clips of mid-western folks trying to contain their excitement as they learned the true value of their grandfather’s cuckoo clock. Then this subtle high started to pull at the cogs in my brain, reminding me I had work to do. I diligently went through some emails and made some phone calls, and you could say that I’d been generally productive while under the loving care of the FOCUS HoneyShot.

I had no brain fog or issues comprehending information. As suggested, this honey stick made for an able study partner, or a springboard for getting some house chores done. The FOCUS stick even got me to finally replace the garden hose, which means if you ask my wife, it’s worth its weight in gold. Like the other selections, it had a classic honey taste with hardly any hint of cannabis to overpower it. I was quickly reaching peak honey.

The last stick of medicated-bee magic was the appropriately named SNOOZE. It contained 2mg of CBN, THC, and melatonin. I stirred it into my fourth cup of the day, and it was time to use the most grand cup and saucer of them all. This one had a swooping porcelain handle just large enough to stick the tip of your index finger through, which meant the pinky went skyward when one took a sip. My wife said I looked ridiculous drinking out of it, but I didn’t care. I’d been so deluged with cannabis-infused honey at that point that I had a good mind to take my tea to the drawing room, where I’d be accompanied by my favorite television family: The Crawleys from Downton Abbey.

“The overriding feature of them all was an ability to mitigate stress and help get you to stop and smell the flowers for a change. ”

I mixed the SNOOZE honey with some chamomile, and ultimately settled back into bed watching a documentary about narcotics traffickers. My wife told me that if I broke her grandmother’s fine china, she’d have me killed like the informants on the show I was watching. Lucky for everyone, I was soon out like a light. The SNOOZE HoneyShot was a one-way ticket to Slumber Town, and I could hardly remember how long it took for it to take hold. It must have been quick because as soon as I felt that pillow—it was auf wiedersehen goodbye time.

The entire honey gamut of Kikoko proved a reliable soundtrack to a day of exploration and relaxation. Tailor-made highs targeting your preferred activity and tolerance. A smoke-free way to get high or find relief without the artificial ingredients of most edibles. The Kikoko HoneyShots are best enjoyed with your favorite hot beverage, or if you got that killer sweet tooth, go au natural and sample the purity of the manuka or kanuka honey straight up. While each delivered in its own precise way, the overriding feature of them all was an ability to mitigate stress and help get you to stop and smell the flowers for a change. Whatever sort of flower it may be.

Be the first to review Snooze Honey Shot from kikoko and help others find their high.