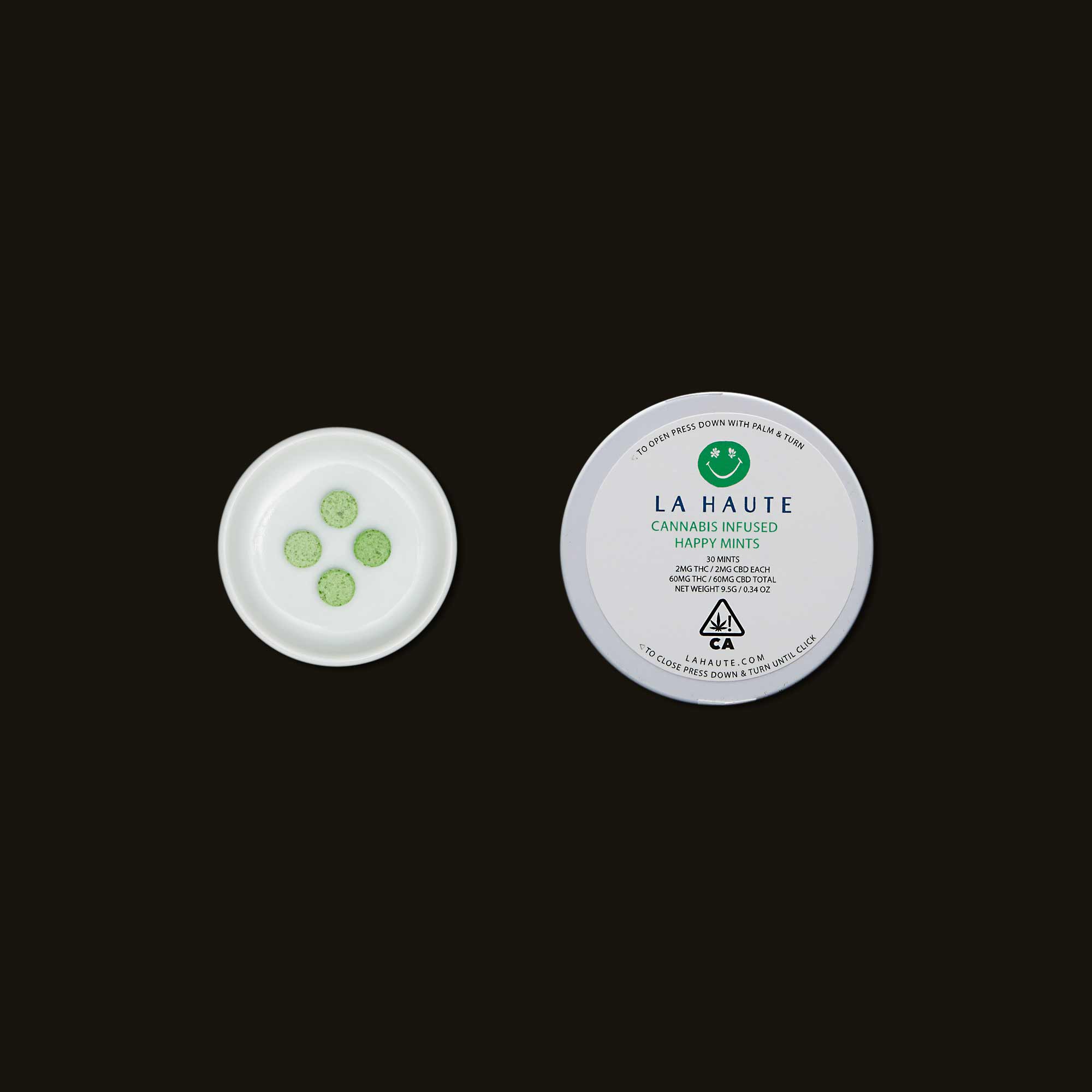 La Haute's Happy Mints are microdosed edibles with a balanced ratio of CBD and THC. The resulting high is super mild and breezy, making it ideal for a non-intrusive mood boost. You can expect your sour mood to turn into a more optimistic outlook on the day, so these are perfect for those who are not morning people. Just a mint or two can leave you more willing to slow down and take things one step at a time.

Ranked 80 of 224 in Edibles for feeling Relaxed. 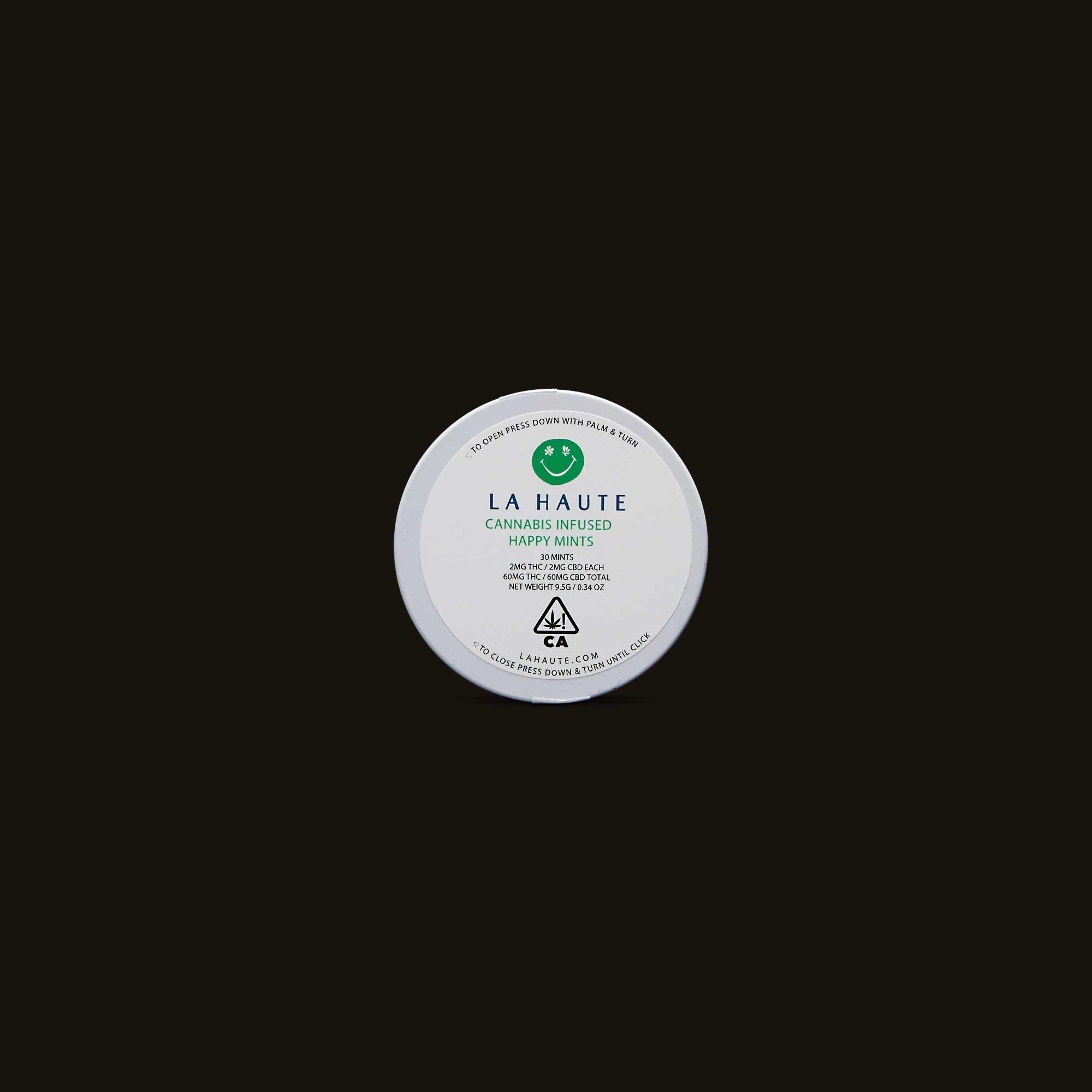 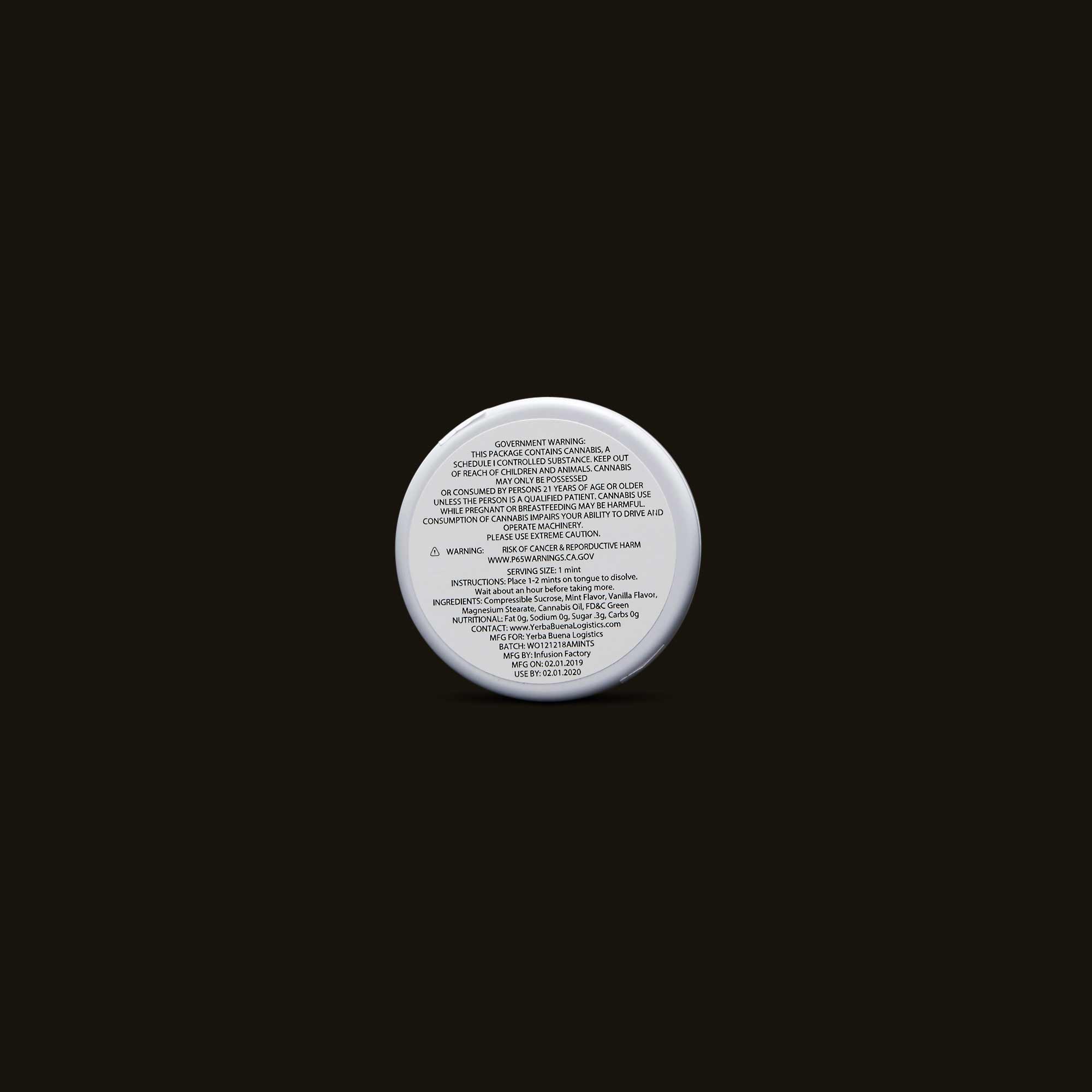 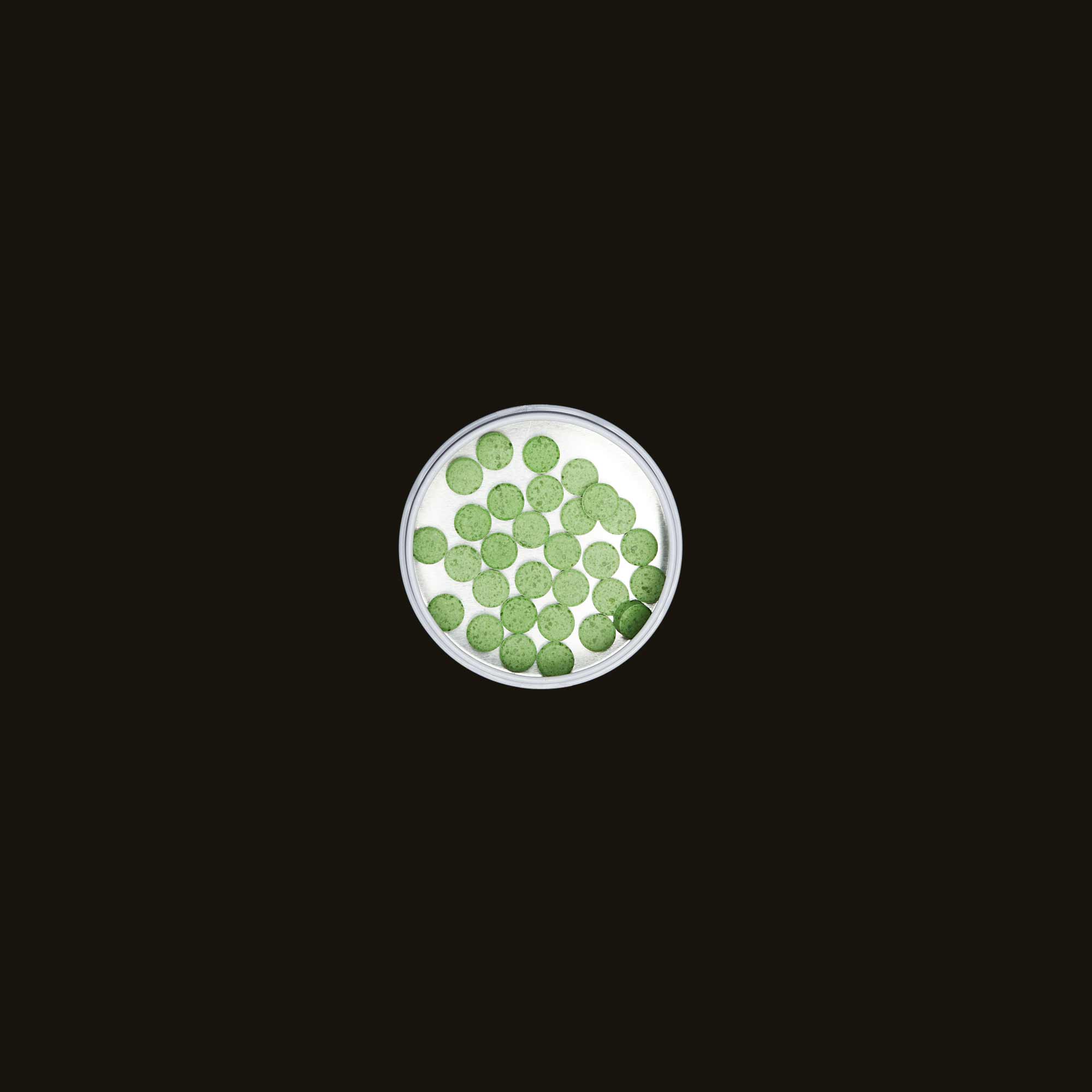 As our committee rates Happy Mints, we capture their experience in real time through our ratings app and report everything back here.

Ranked 80 of 224 in Edibles for feeling Relaxed.

These mints turned my cranky, crabby self into the best copilot any driver could ask for.

Road trips are fun, but any performer knows that working on the road is no vacation. An early morning commute from Los Angeles to Las Vegas with other sensitive artists you don’t really know is more like a stress test than a holiday. Add the pressure of performing that night, subtract getting enough sleep, and it’s hard for it all not to equal a hellish five hours in a car.

As a tall lady cramped by bags of costumes, it was a physical challenge, too. Also, I was on my period. Like, fiercely. So I knew I needed something as strong as Jesus to be my copilot for this harrowing desert drive. Being a Jewish stoner, I turned to Cannabis instead of Christ, and brought some Happy Mints from La Haute along for the ride.

“The dose was light enough not to leave me feeling fuzzy—and this was before I’d had any coffee.”

These 1:1 mints each contain 2mg of both THC and CBD, so I popped one in my mouth just before we left. The smell was sweet, but there was a lingering sourness behind the minty flavor. The aftertaste was intensely bitter and I had to chase it down with water. My first impression was underwhelming to say the least, but these Happy Mints surprised me by actually living up to their name.

The dose was light enough not to leave me feeling fuzzy—and this was before I’d had any coffee. I’m normally a monster before I’m caffeinated, but with the help of this mint, I was helping with navigation and keeping up a light, chipper conversation. I didn’t even get frustrated when the driver took a wrong turn on the freeway that ended up costing us thirty minutes. Instead, I just floated on the light waves of Happy Mint euphoria passing through my mind.

These low-dose mints contain a calming balance of THC and CBD. Normally I don’t feel much from edibles under 5mg so I was skeptical of the 2mg dose, but the entourage effect enhanced the influence of both cannabinoids. The light touch of CBD helped ease my aches and cramps as well as smooth out my mood. The subtle kick of THC provided a joyful boost that uplifted my cranky brain. It was the perfect combination for maintaining my chill while keeping me lucid enough to make jokes about the meth trailers we passed along the way.

The desert is vast and gets into your mind. The heat and hours of unchanging landscape makes it feel like a neverending dystopia of billboards, sand, and the hollowed-out skeletons of abandoned buildings. But the Happy Mints kept the mental shadows at bay, even as we drove through the backcountry of Barstow.

The mints wore off after about six hours, which was shortly after we arrived at our destination. As I stood in line waiting to check into my room at Circus Circus, the Fear and Loathing feelings started to creep back in and I wished I had taken just one more.

“The balanced, nuanced high helped me lean into the adventure of our wasteland odyssey.”

The following night, we played a second show before driving straight back to LA at one in the morning. I’m the kind of introvert who normally requires a lot of alone time, so being forced to socialize for two days straight then sit in a small metal box full of people for hours is pure torture. As I felt myself slipping into teeth-gritting anxiety, I suddenly remembered—I had more Happy Mints!

This time I took four mints, which equaled 8mg of both CBD and THC. I needed an even bigger brain boost for this late-night trek. It was hard enough just keeping my eyes open, but I needed to be amusing like my life depended on it because, well, it sort of did. It was my job to keep the sleep-deprived driver awake and alert, and I couldn’t have done it without these mints. They were the only thing keeping me chatty without becoming a cranky, ranting lunatic.

The balanced, nuanced high helped me lean into the adventure of our wasteland odyssey and put off the exhaustion. The warm, fuzzy uplift made me feel less like I was on a highway to hell and more like the highway of life I wanted to ride all night long. It was like there was a DJ in my head that knew just what words to play next so I didn’t have to think about, so I listened to myself chat away into the dawn like it was a fun song on the radio.

As we pulled into LA at sunrise, I was surprised that the desert had flown by. The drive had still been long and cramped, but a good travelling companion can make any trek more fun. The next time I hit the road, I’m definitely bringing these Happy Mints along. After all, they’re my new ride-or-die.