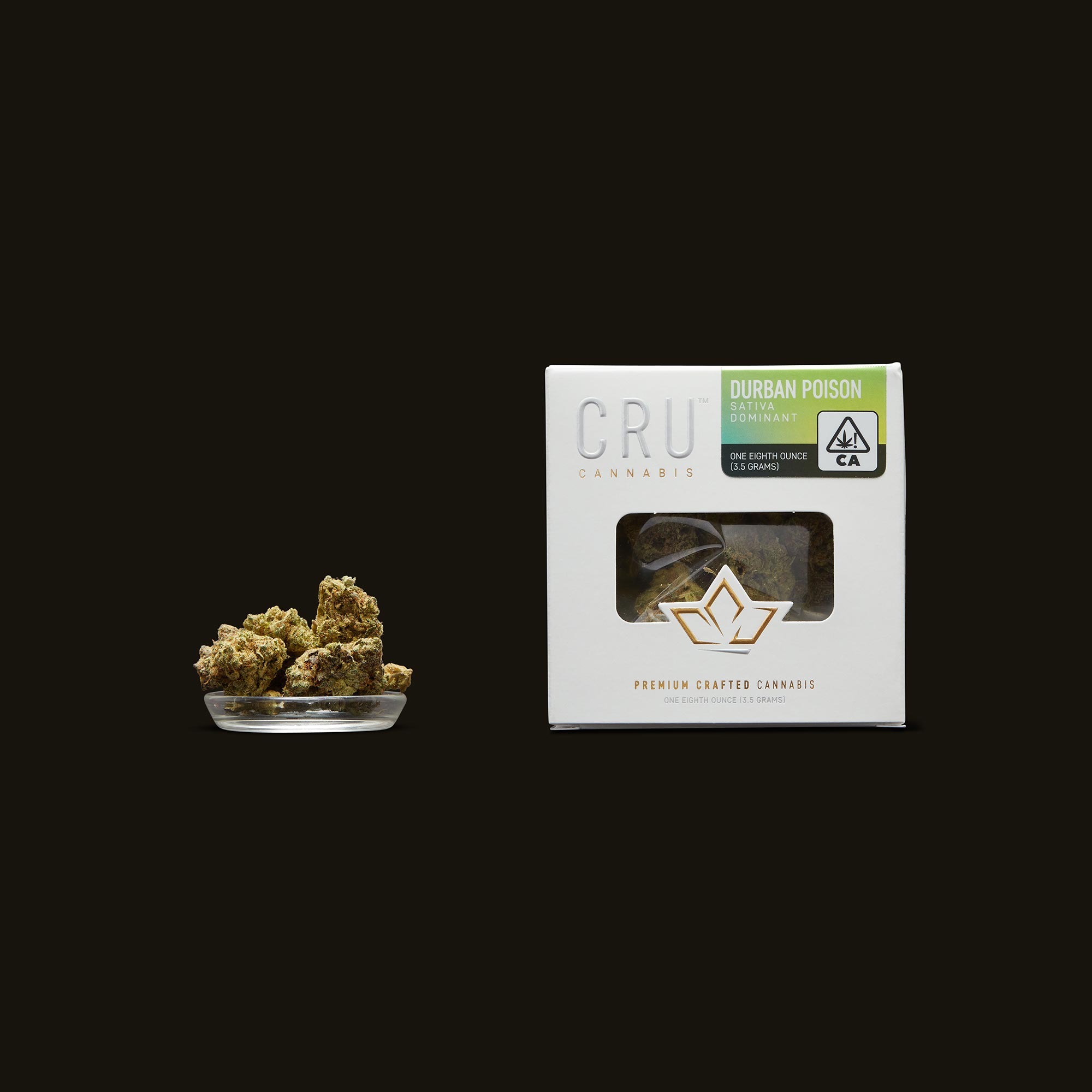 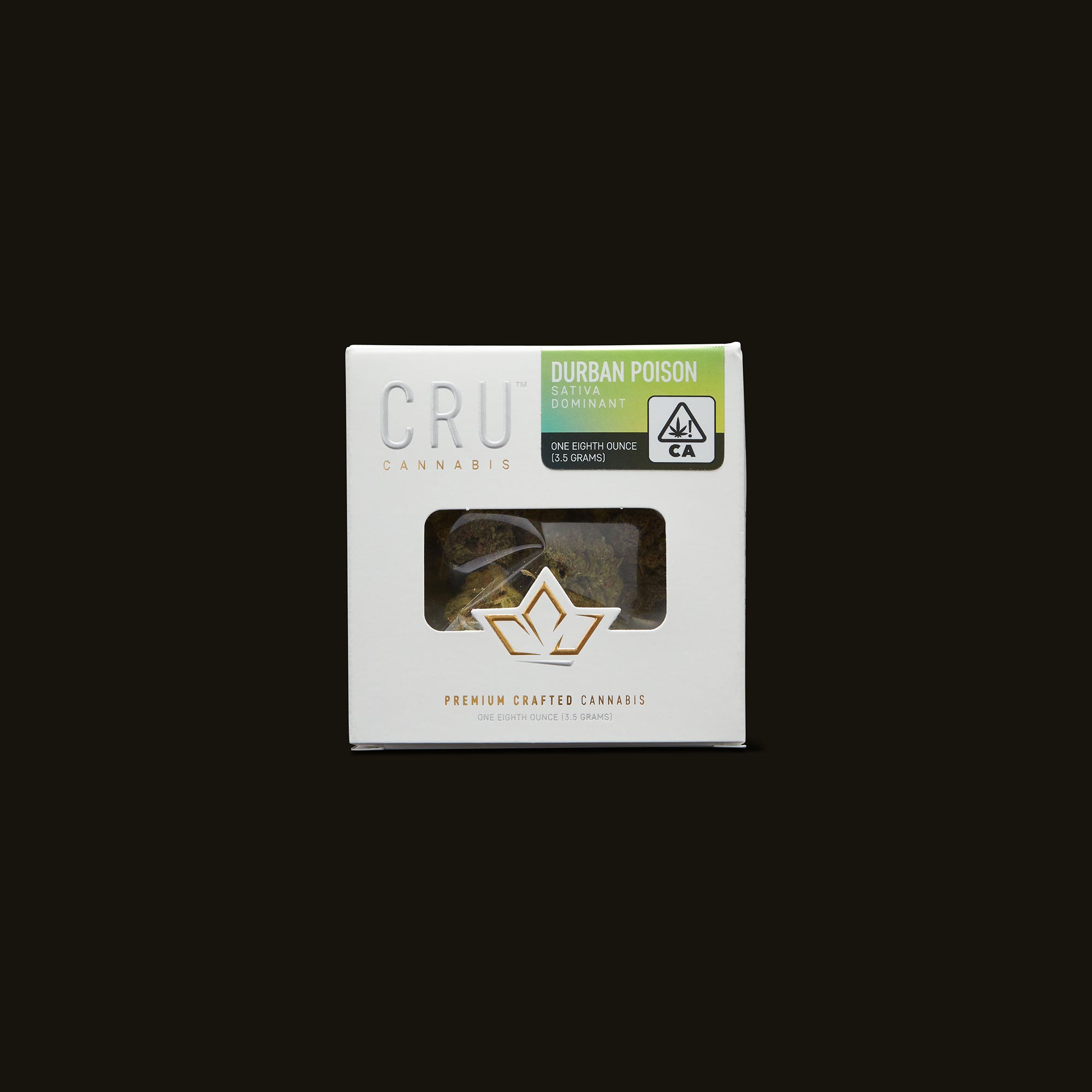 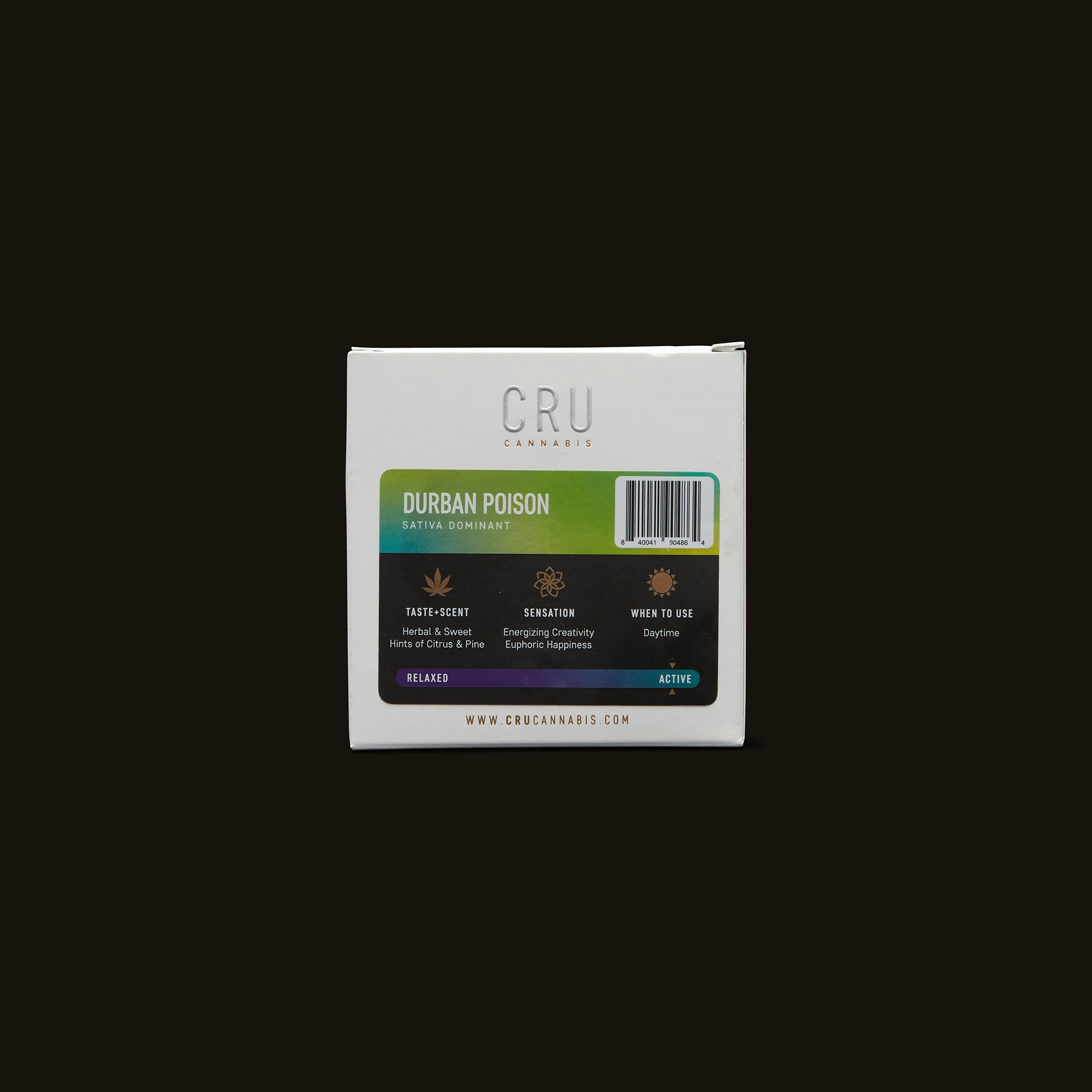 As our committee rates Durban Poison, we capture their experience in real time through our ratings app and report everything back here.

Get swept away in a state of creative euphoria with this fan favorite.

IN REVIEW: Durban Poison is sativa by CRU Cannabis that won’t stop you from taking care of business, and its mouthwatering citrus aroma might linger longer than your buzz. If you’re looking for a sense of calm, Durban Poison will focus your thinking while it lifts your mood. This potent and heady flower only barely misses the mark for a study session, as you may experience some racy effects. But you can expect alert attributes to cut through the fog and provide nearly uncapped energy for any activity.

A lot changed for me in Quarantine. Within two months, I’d lost the biggest book deal of my life and my boyfriend of two and a half years was leaving his current job for a new one in Houston, meaning he would have to move in about a month.

I’d just won my indoor fitness competition, and I had just about nothing else to look forward to. Except splitting time between LA and Texas to try and keep my relationship going while continuing to scrape together my “creative career.” Awesome. I was definitely in need of some positive vibes from this timely high.

“It was probably one of my favorite flower smells of all time: an unmistakable, natural, and sweet citrus with a fresh, sour bite that hung in the air.”

So the partner and I hunkered down for the night like we had pretty much every night for the previous 60 days. My choice for the evening to turn this bad mood around? Durban Poison. The name matched my desire to check the hell out, and the connoisseur in me recognized it as a classic, fan-favorite sativa strain. I don’t typically choose a sativa at night, but it was just 17% THC, it was early enough and I wanted to stay alert and productive...if at all possible. I was lethargic already, but the boy and I still had a lot on our plate.

I’d been starting to teach him to roll a cone, and I wouldn’t say it was going well. My boyfriend hates to be bad at things, and he jokes that he has Trump hands with stubby fingers. But the exquisite smell of the Durban Poison lit up the room before I’d even set flame to it. It was probably one of my favorite flower smells of all time: an unmistakable, natural, and sweet citrus with a fresh, sour bite that hung in the air. Once I lit the joint and took a drag the flavor smacked me just slightly less than the scent. The smooth exhale had a hint of popcorn on the side, which may have been a result of the burning paper.

A few minutes later and oh my, was I high. At first, it left me feeling only moderately functional, and it was a pretty awkward time for us to be wording my boyfriend’s resignation email. I was settling into a blurry playfulness as we moved through virtual tours of Houston homes. But then, all at once in front of his computer, I started to lose my edge in conversation. I was fumbling and barely able to communicate my thoughts, but still got my point across better than I’d have expected while intoxicated. My playfulness was coming up against some heavy resistance as we tried to meet minds on our quickly changing future together. The upbeat nature of this high had a formidable challenger, but it kept me chugging along nonetheless.

“This strain gave me the clarity to breathe, chill, and not overreact.”

We started arguing about what we wanted in a home. My aesthetic preferences seemed paltry to him, and he kept brushing them off hella dismissively as if he were personally offended by each one. I ended up leaving the living room and even slamming my bedroom door, so perhaps the excitability of this sativa didn’t allow me to fully reign in my emotions.

But there, on my bed, I found my center and collected myself into a state of calm. Even as my cozy world seemed like it was crumbling around me, my head stayed its course. The name is almost a misnomer as it seemed to suck the poison out of my day rather than inject it. I sat on my bed in a self-imposed time out to gather my thoughts. I didn’t text my gal pals to complain or my sympathetic guy friends for guidance. This strain gave me the clarity to breathe, chill, and not overreact. I was happy to pass the time and collect myself until I felt ready to address whatever the hell was happening out there.

Subconsciously, I think I was brainstorming and cultivating mindfulness to hopefully solve our relationship problem. By the time I re-emerged into the living room, this strain had helped me embody my best self. With a sense of courage typically attributed to booze, I was ready to think on my feet and deliver a message both gentle and direct. After a short exchange expressing my dislike of being dismissed, and my fear of being partners with someone who can’t look at pictures with me without arguing, I asked my man to role play. He knew I wasn’t being kinky.

With the skill of a trained life coach or therapist (I am not), but the demeanor of someone more relatable to my boyfriend (like Conan O’Brien), I began a dialogue with him wherein I played him, and he played me. Within minutes he saw how much more swimmingly our housing conversation could have gone. Thanks to the focus provided by this weed I found myself to be reasonable and articulate in spite of hurt feelings. I couldn’t have been more overwhelmed or tired, but the typical wrenching of my gut with anxiety never reared up as we navigated our very real issues. Instead, I felt a burst of calm, creative energy to confront the muck I’d been sifting through.

Durban Poison seemed to be saying: “None of this is the end of the world.” Even if I wasn’t as heroic as I felt, this flower gave me a sense of high-mindedness. Within the hour, we were back to watching Cesar Millan Dog Whisperer videos and relaxing together in bed. Even in these unimportant doings, I felt so extremely focused on the moment, and all I wanted was to curl up and sink into the sheets. Life felt more...practical. In spite of our mounting need to figure shit out, in that instant there was nothing urgent to do, and nothing real to stress about. I’d pay for this level of clarity, but thankfully this time I was testing it for free. The effects were wearing off in my mind as the body buzz slowly eclipsed it. This led to some shuteye, and when it was time it was surprisingly easy to turn off my agile brain despite the preceding sativa effects.

The next morning my eyes were especially tired, and much was cloudy about the prior evening...pretty much everything but the role play. But this high had shown such an analytical quality without ever letting my mind go off the rails, or preventing my eventual sleep. Having enhanced both my energy and my chill with Durban Poison, I recalled that even in moments of discord with my person, everything would be okay.