Ranked 86 of 471 in Flowers for feeling Euphoric. 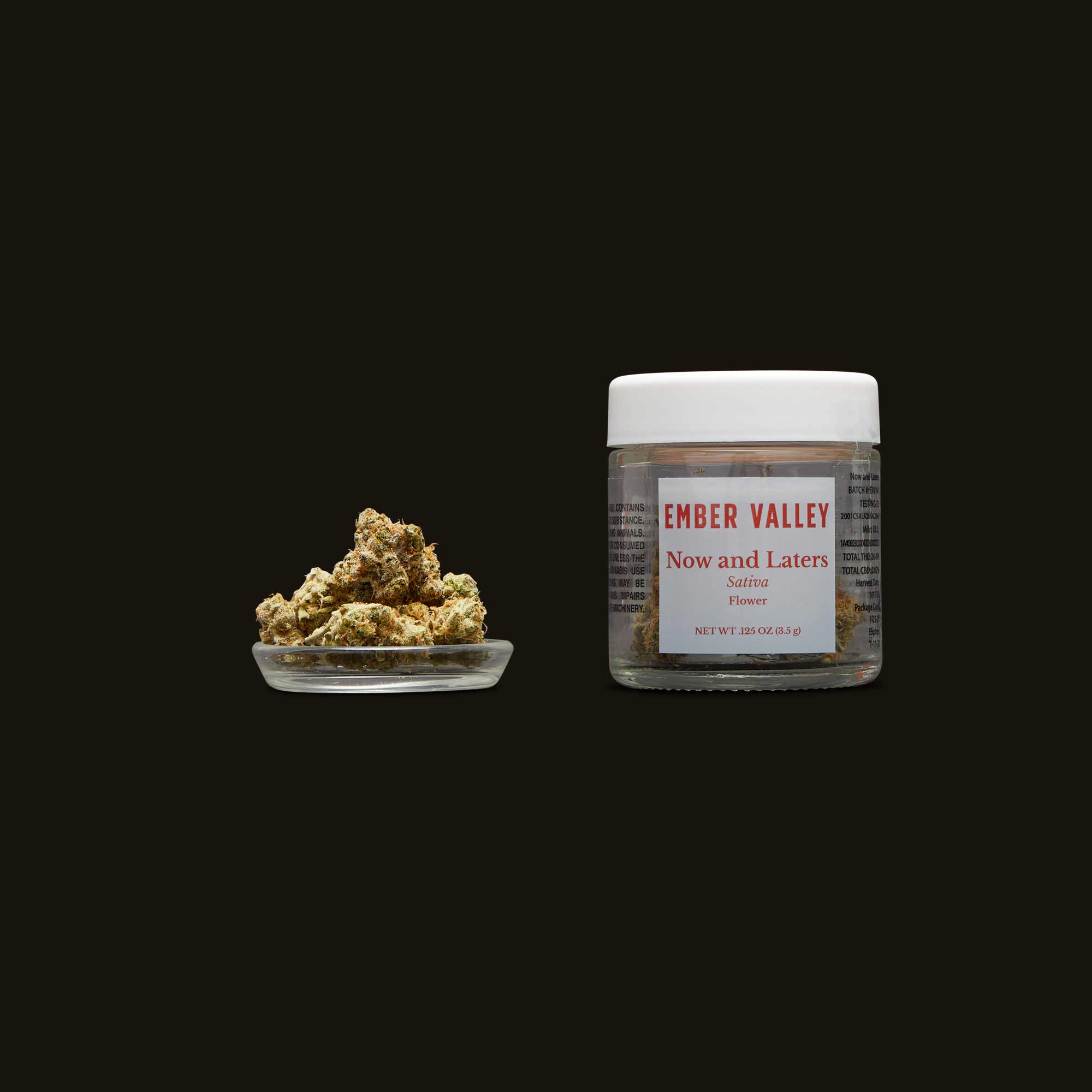 As our committee rates Now and Laters, we capture their experience in real time through our ratings app and report everything back here.

Ranked 86 of 471 in Flowers for feeling Euphoric.

I feel focused and even a bit inspired, making this a good match for some process-driven creativity. Body-wise, I feel light and almost floaty.

Writer, Printmaker, and Pop-Punk Enthusiast. It's not a phase, Mom.

Light Up Your Ember and Get Cooking

This euphoric strain will give you a creative boost now, and a bank of ideas for later.

IN REVIEW: Ember Valley’s Now and Laters is a sativa dominant strain that delivers a focused euphoria making it the perfect pairing for process-driven creativity like pulling prints, or getting crafty in the kitchen. This frosty, red hair-covered flower comes in at 24.49% THC and provides balanced effects that lift you up as gently as they set you down. The juicy flavors may make it hard to stop smoking, and just like the candy it’s named after, there’s rarely much left for later.

If you’ve been on the internet lately, you’ve probably noticed an uptick in at-home kitchen creativity. From fermenting all the things to sharpening your sourdough skills, and of course, an abundance of banana bread—my social feeds are filled to the brim with more food than ever. And I, an amateur home chef, am certainly not exempt from this sudden kitchen escapism. This is exactly where I found myself the first time I tried out the delightfully sour, and classically earthy, Ember Valley Now and Laters sativa flower.

“The world got quiet, and perhaps more notably, my thoughts did as well. ”

I’d finished another stressful day working from home, and I was ready to unwind with my chef’s knife and a few unsuspecting veggies (sorry kabocha squash, your time has come). Lucky for me, Now and Laters also seemed ready to help me unwind, and within a few hits I felt a wave of relief wash over me. I felt my stress dissipate—and a light, bubbly euphoria filled its place. The body high was subtle, but I imagine floating on a cloud feels somewhat similar to the sensation I felt. A strong focus accompanied the euphoria, and I felt locked in on my dinner prep.

While I wouldn’t necessarily describe this high as overtly creative or inspiring, the focus and euphoric relief made it a stellar option for any kind of creating that’s largely process-driven. My ability to finally achieve a fat stack of paper-thin green onion slices was proof enough for me. I found myself wholly absorbed in each step of my cooking process, lost in complete concentration. The world got quiet, and perhaps more notably, my thoughts did as well. As someone whose mind is constantly racing, a little bit of silence was a welcome shift. I can only imagine how perfect these effects would pair with printmaking, another process-driven creative outlet I enjoy losing myself in.

As my high progressed, whatever initial creative vibes I felt started to wear off, but the intense focus hung strong. I finished preparing dinner and sat down to enjoy the fruits of my labor with my boyfriend. This is about the time I noticed that while euphoric, and generally a mood booster, this high was not great for socializing. To be fair, this worked out pretty well because if I want to get lost in something, whether that’s a creative process or even just a movie, chances are that means I don’t feel like engaging in conversation anyway. We settled in with Michael Moore’s most recent documentary about how completely fucked the planet is (yikes—but strongly recommend) and got lost in the story woven around heavy information. Towards the end, the euphoria faded, but the overall high lasted a healthy length of time. After using a lot of extracts and vapes recently, which seem to fade faster, this was a refreshing reminder of why, for me at least, flower reigns supreme.

“ I found myself getting lost in the high, my psyche sinking backward and nestling up further within itself. ”

The next night, my boyfriend and I found ourselves having a lengthy conversation about tasting notes, and developing a palate for wine, chocolate, coffee, and weed. During this, we both realized we didn’t really know how to articulate the flavor of “diesel.” But as I jumped in for round two with Now and Laters and took my first hit, I became convinced this strain had subtle diesel notes. After doing a bit of research on the lineage I found that one of the great-grandparents is in fact Sour Diesel, which felt hugely validating, even though it was somewhat far back on the family tree.

Round two was pretty consistent with round one. I found myself getting lost in the high, my psyche sinking backward and nestling up further within itself. Or, more simply put, I felt myself disconnecting and zoning out. While I still felt focused, I was able to distinguish that the overall energy leaned more relaxing than an activated go-go vibe. I felt a mild boost of creativity on the front end of the high, which once again proved that this is the weed to reach for when diving into a creative process. I cruised along with this focused, euphoric high for a while longer until it let me down nice and gently.

As a printmaker and amateur home chef, finding a flower that enables an intense level of focus with a tinge of creative energy is a treat. Being stuck inside under stay-at-home orders, I’m doing a ton of cooking, and this has proven a great pairing for that process-driven creativity, like hand rolling pasta dough and grinding up pesto with a mortar and pestle. And while I haven’t been pulling any prints lately, I know next time I reach for my brayer, I may also be reaching for Ember Valley Now and Laters.

Be the first to review Now and Laters from Ember Valley and help others find their high.