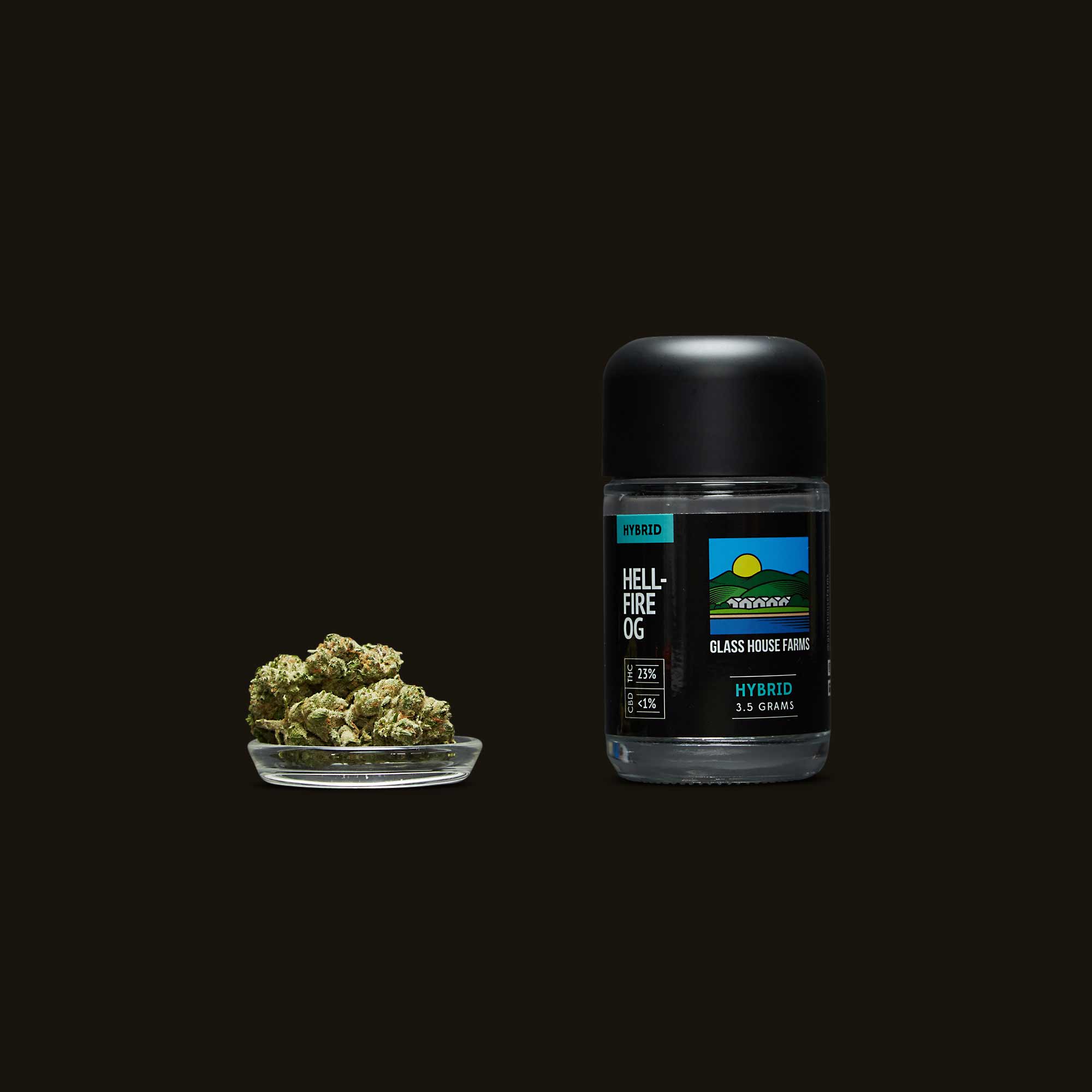 Glass House Farms' Hellfire OG is an earthy hybrid flower that brings on a potent high. You're likely to feel energized, euphoric, and entirely wrapped in your best daydreams. As you're about to be shot into outer space with this high, be mindful of your space and try to set yourself up in a comfortable corner. You may not be productive, but you'll probably have a good time.

Ranked 94 of 256 in Flower for feeling Euphoric. 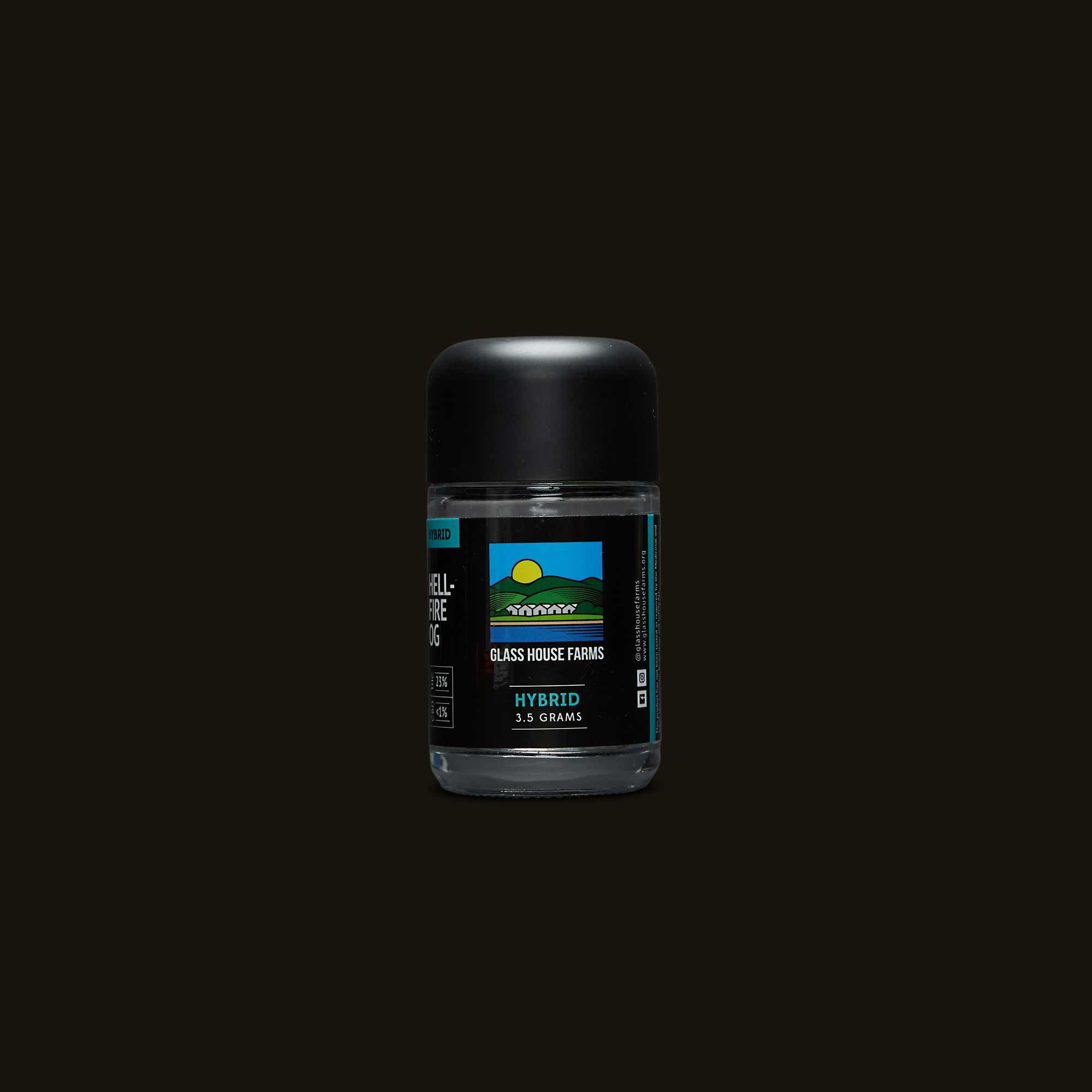 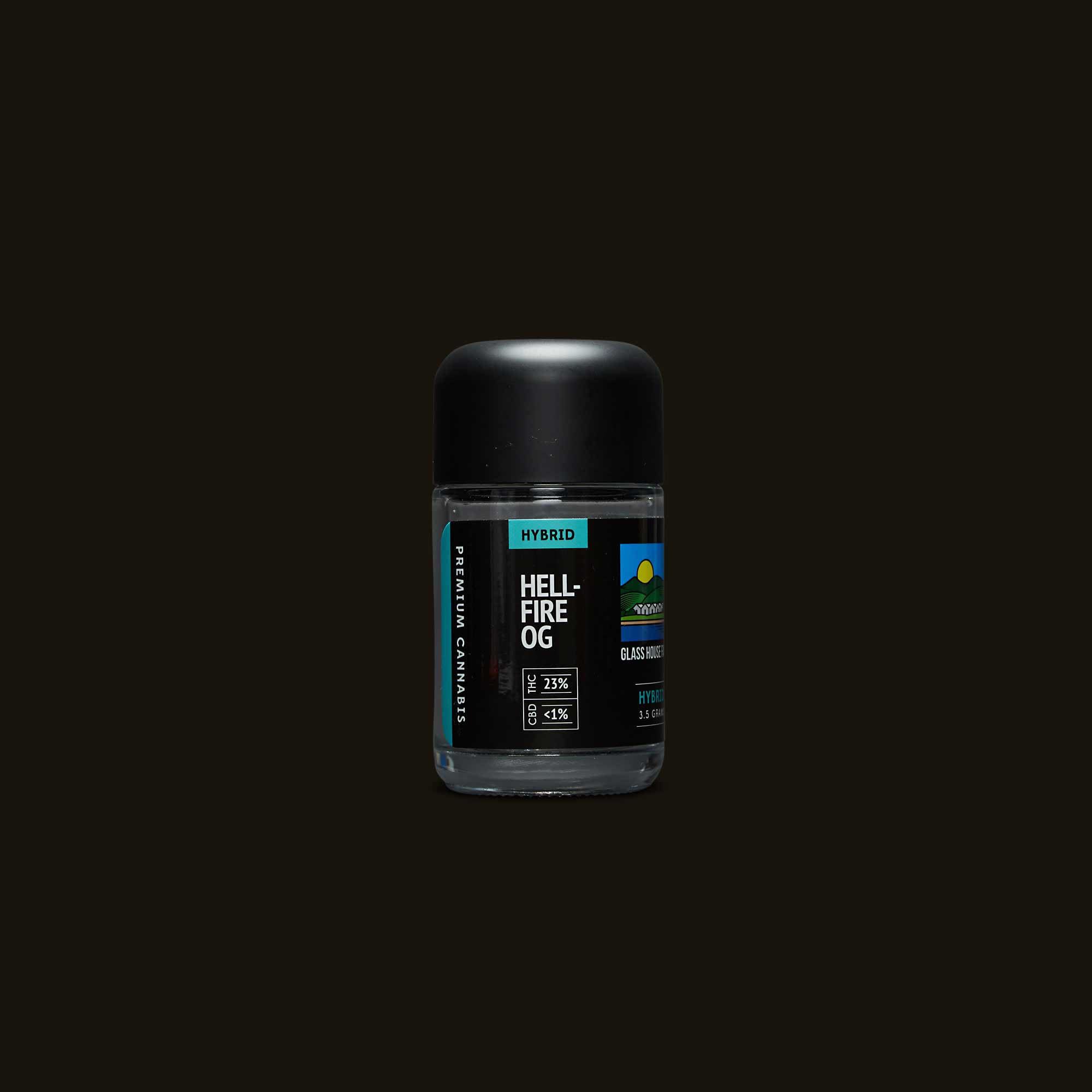 As our committee rates Hellfire OG, we capture their experience in real time through our ratings app and report everything back here.

Ranked 94 of 256 in Flower for feeling Euphoric.

Though I’m a concentrates purist, there will always be a special place in my heart for some dank flower. Because, like most cannabis consumers, I began my love affair with the plant as a teen. At the time, weed was still illegal, and I remember rolling a joint and sneaking away from my parents’ house to split it with my friends. Back then, this ritual was my exclusive consumption method and the strongest association I had with the herb. It was during this rookie season in my smoking career that I really felt cannabis’s impact most. It's what I now think of as that nostalgic, feels-like-the-first-time experience commonly known as getting “high-school high.”

Now, with multiple years of cannabis use under my belt, I’m dabbing high-, full-spectrum extracts out of glass pipes that cost more than some people's cars. That said, I'm always game for good flower. Smoking a quality joint is such an enjoyable pursuit, and it reminds me of why I fell in love with the herb in the first place.

With an increasing number of recreational adult-use laws coming onto the books in different states, there are more people growing weed than ever before. One would think that with so many growers, competition and quality would increase and retail costs would go down. This hasn’t exactly been the case, especially here in California. Sure, there is undoubtedly a greater variety of strains currently available to consumers, but a wave of newbie growers looking to get rich from the Green Rush have unloaded tons of subpar pot onto dispensaries across the Golden State.

California’s Proposition 64, or the state’s 2016 voter-approved recreational adult-use law, effectively opened the floodgates for low-quality bud in an effort to meet the anticipated uptick in demand. Don’t get me wrong, just because there's more junk on retail shelves doesn’t mean there aren’t quality growers still pushing out the good stuff. It’s just much harder to discover companies producing clean, potent flower for the modern market. You can imagine my surprise when the skies parted to reveal Hellfire OG from Glass House Farms. Hallelujah!

Basically, these nugs have what’s known as “bag appeal.” Visually, the flower looks healthy and free from contaminants. The nugs are full-bodied but not bloated like those grown with heavy amounts of PGRs, otherwise known as plant growth regulators. The Hellfire OG nugs are also trimmed very well, and they give off that classic earthy OG smell that instantly brings me back to my early days of smoking. The aroma isn’t overwhelming or especially pungent, but it is just enough to grab my attention.

What impressed me most was learning this Hellfire OG was grown using light deprivation. The Glass House Farms name is actually a nod to the fact that all their product is grown in a greenhouse using this technique—known as "light dep" for short. While light dep quality is widely perceived as being halfway between indoor and outdoor grown, the appearance and effects of the Hellfire OG are certainly more reminiscent of traditional indoor-grown bud.

To test out the flower, I rolled a couple joints and took them to a concert in the Koreatown neighborhood of Los Angeles. As I waited outside the Wiltern theater to see a pop-punk band from my youth, it only seemed appropriate that I duck away to share a joint with my friends. We casually ascended to the top of a parking garage and sparked one of the Hellfire joints I had prepared. The joint burned evenly into white ash and delivered a pleasantly smooth smoking experience. The OG taste triggered my associative memory, and I felt like I was transported back in time.

Despite the legality of recreational adult use, the regulations surrounding public consumption have yet to be determined, so naturally I caught myself checking over my shoulder like a guilty teenager. The effects came on within minutes, but the real nostalgia didn’t kick in until after we walked into the show. Once we entered the pit, I really started to feel the onset of a euphoric head high. The euphoria was then accompanied by feelings of joy and slight disorientation. There I was dancing and laughing, experiencing an overwhelming sensation I hadn’t felt in years. I was “high school high” again, and it was great.

Hellfire OG is a particularly interesting strain. The cerebral effects from the crossing of OG Kush and SFV OG come in waves, taking you on a ride through a series of peaks and valleys. At times, I was actually intoxicated and had to regain my composure long enough to mosh through a song from start to finish. One would think these rolling effects would be short-lived, but that wasn’t the case. At no point did I feel the need to hit the bar for an added buzz between opening acts. Coming from someone who habitually rips a low-temp dab before his feet touch the ground in the morning, it was pleasantly surprising that just one joint of this flower kept me sufficiently high through the majority of the concert.

In all, the Hellfire OG from Glass House Farms gives me hope for the future of California’s recreational cannabis market. The brand is able to produce a clean, good-looking product on a large scale while ensuring that the resulting effects are true to the OG’s iconic heritage. To be clear, I’m not claiming that light dep consistently produces better flowers than a traditional indoor setup where every element of the climate is controlled. I will confidently say, however, that this light dep herb shits on the vast majority of outdoor (as well as other light dep) that is currently available in the Golden State marketplace.

If you are worried about being “too baked” in public, this may not be the appropriate strain for you. It’s definitely an OG that can take you from lightly high to stoney baloney in just a few pulls.

“It’s definitely an OG that can take you from lightly high to stoney baloney in just a few pulls.”

But if you’re like me and constantly hunting for a strain of flower that can deliver something comparable to stronger, concentrated alternatives, Hellfire OG could actually be a godsend. It may take some searching to find a shop in your area that carries Glass House Farms, but at a reasonable $30 per eighth, you can confidently leave the dispensary without feeling like your wallet has been through hell and back.

For now, I’m just praying more cannabis like GHF Hellfire OG hits the market and raises the quality standards. Because it doesn’t matter who you are; if you’re smoking weed in California these days, all of it should be nothing shy of amazing. Can I get an amen to that?