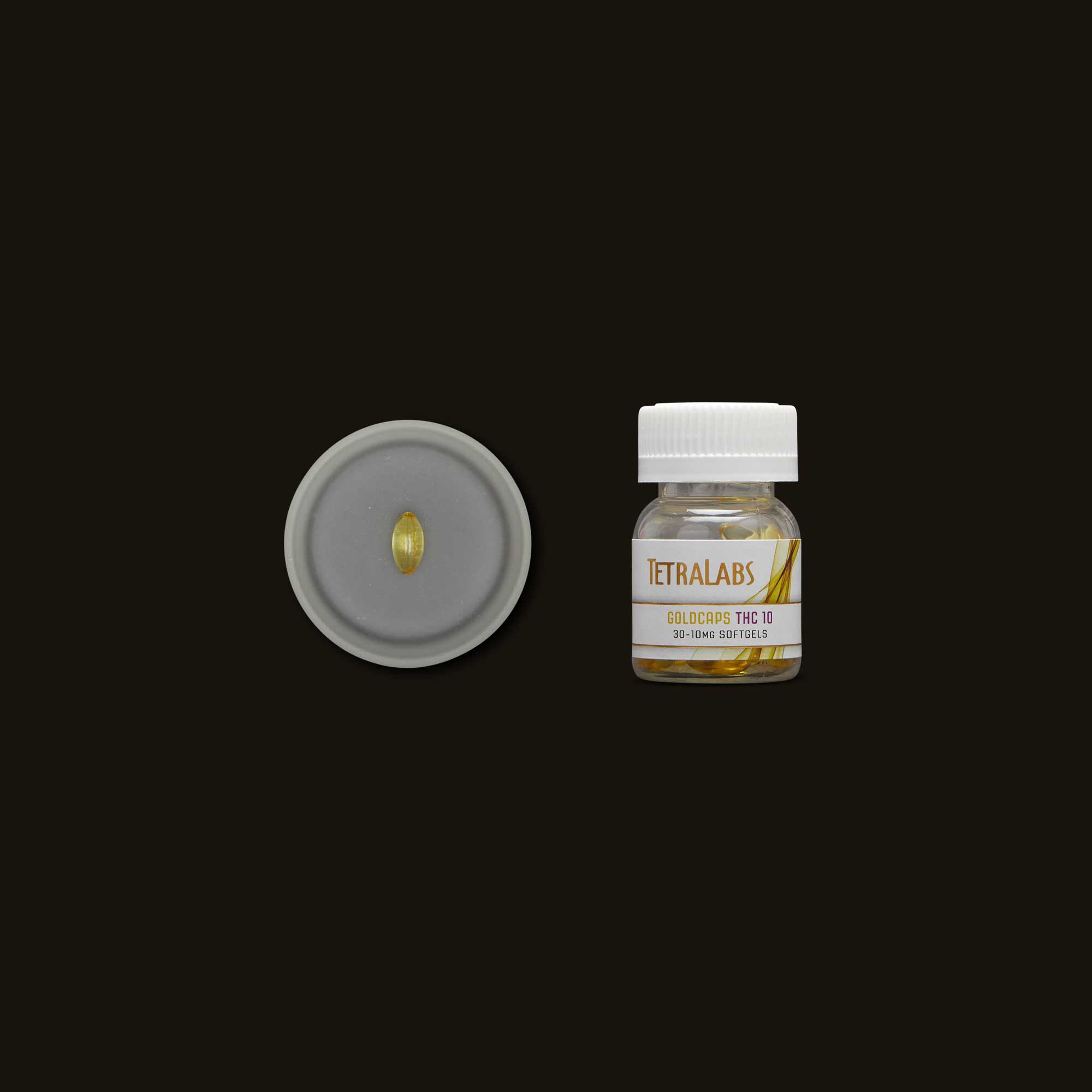 Ranked 17 of 28 in Pills for feeling Relaxed. 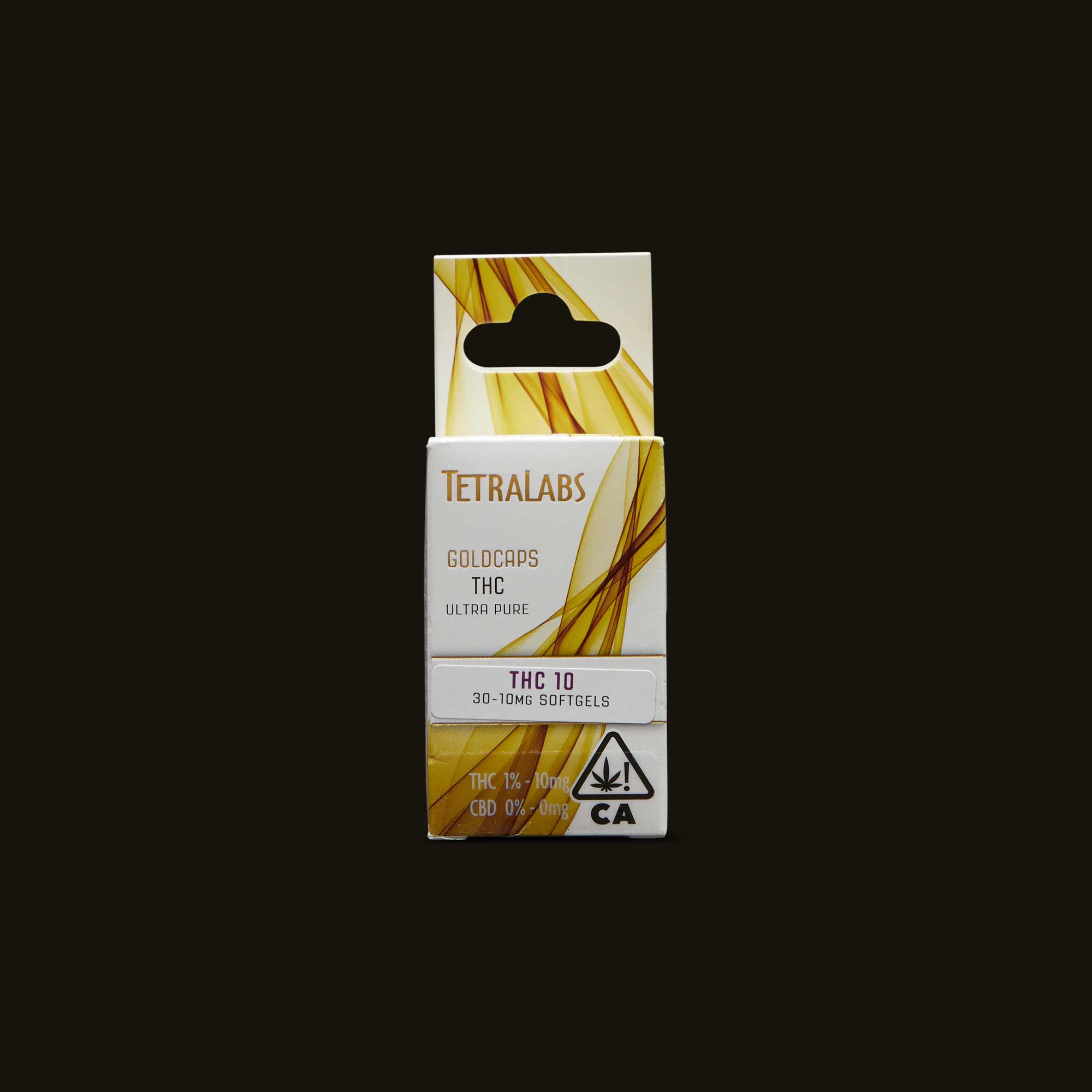 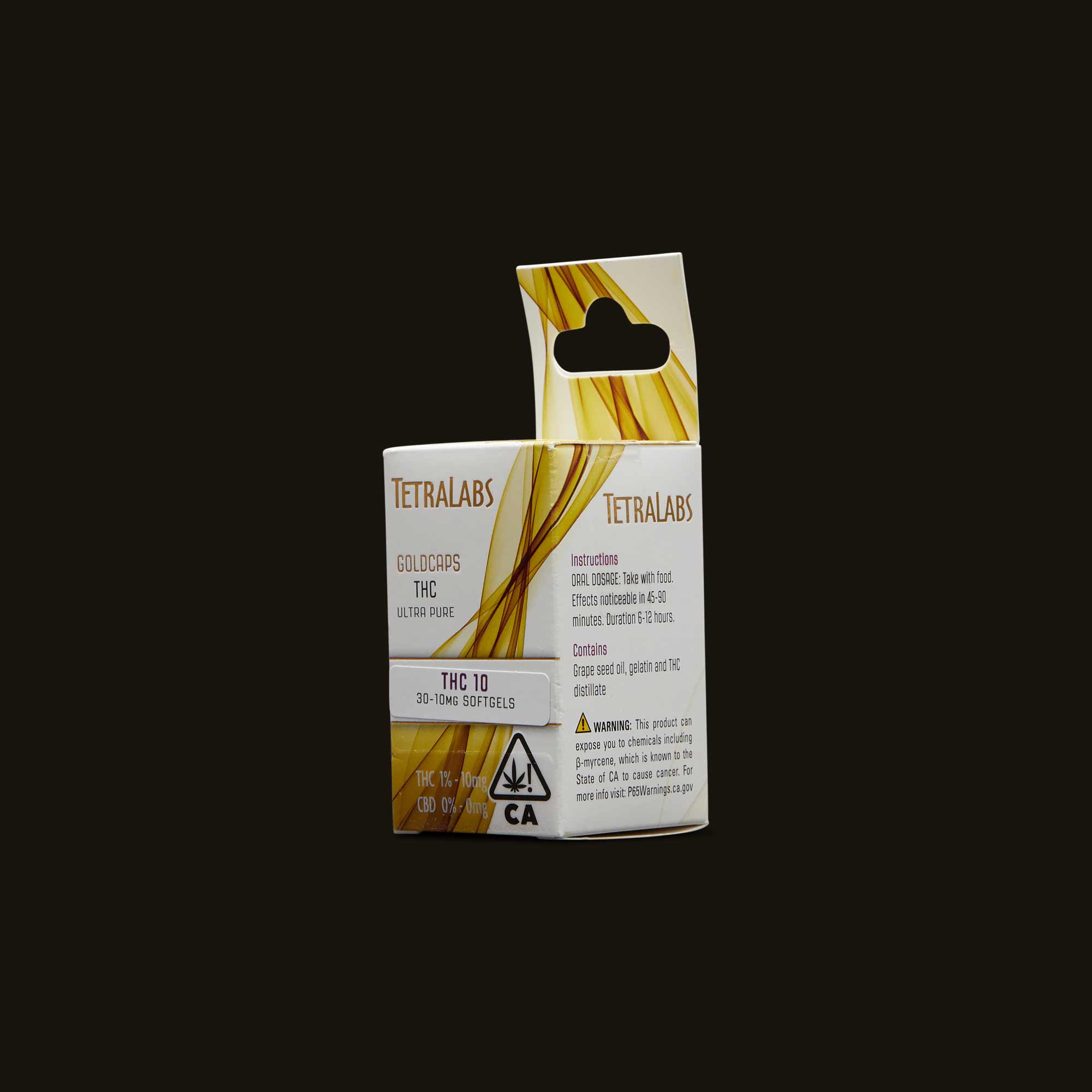 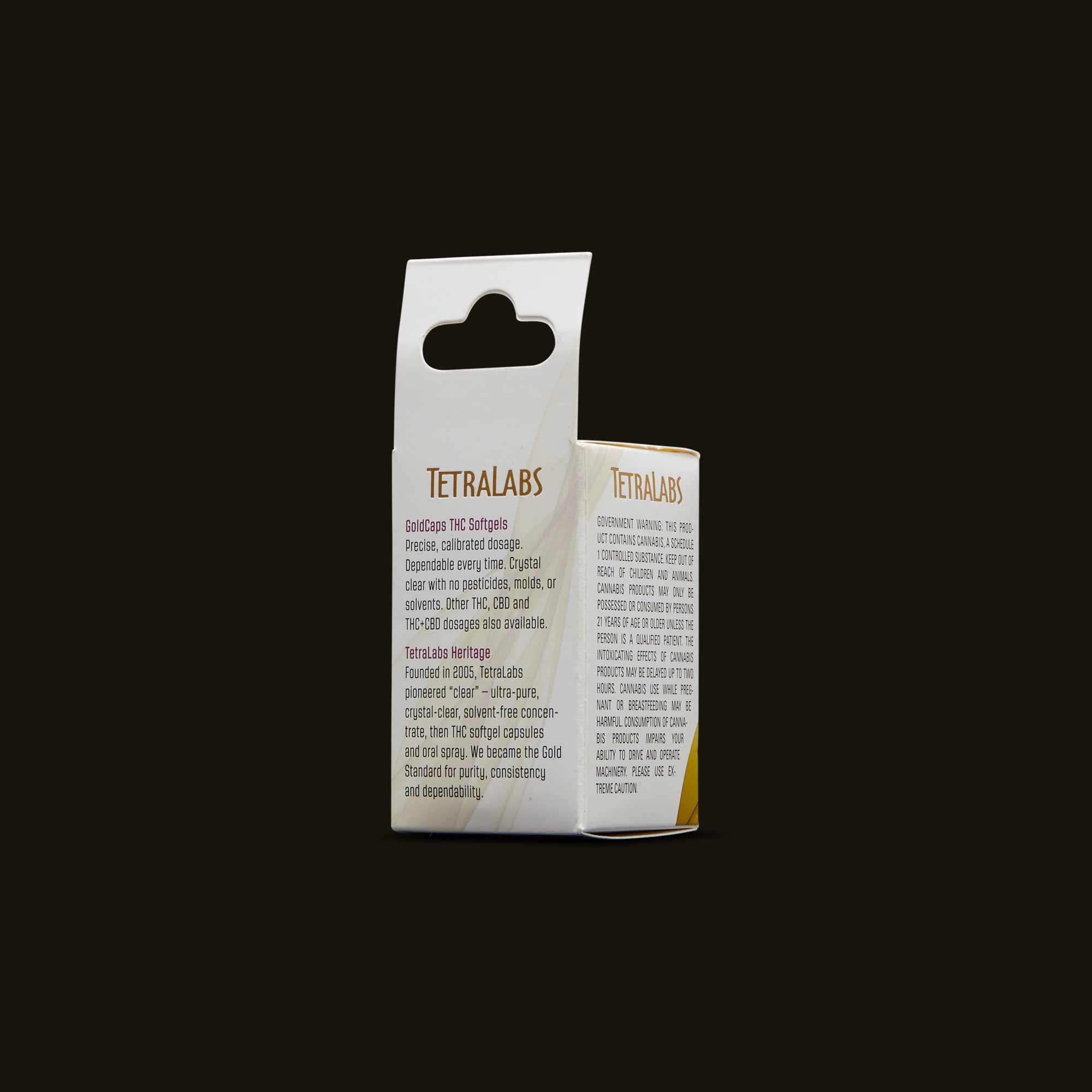 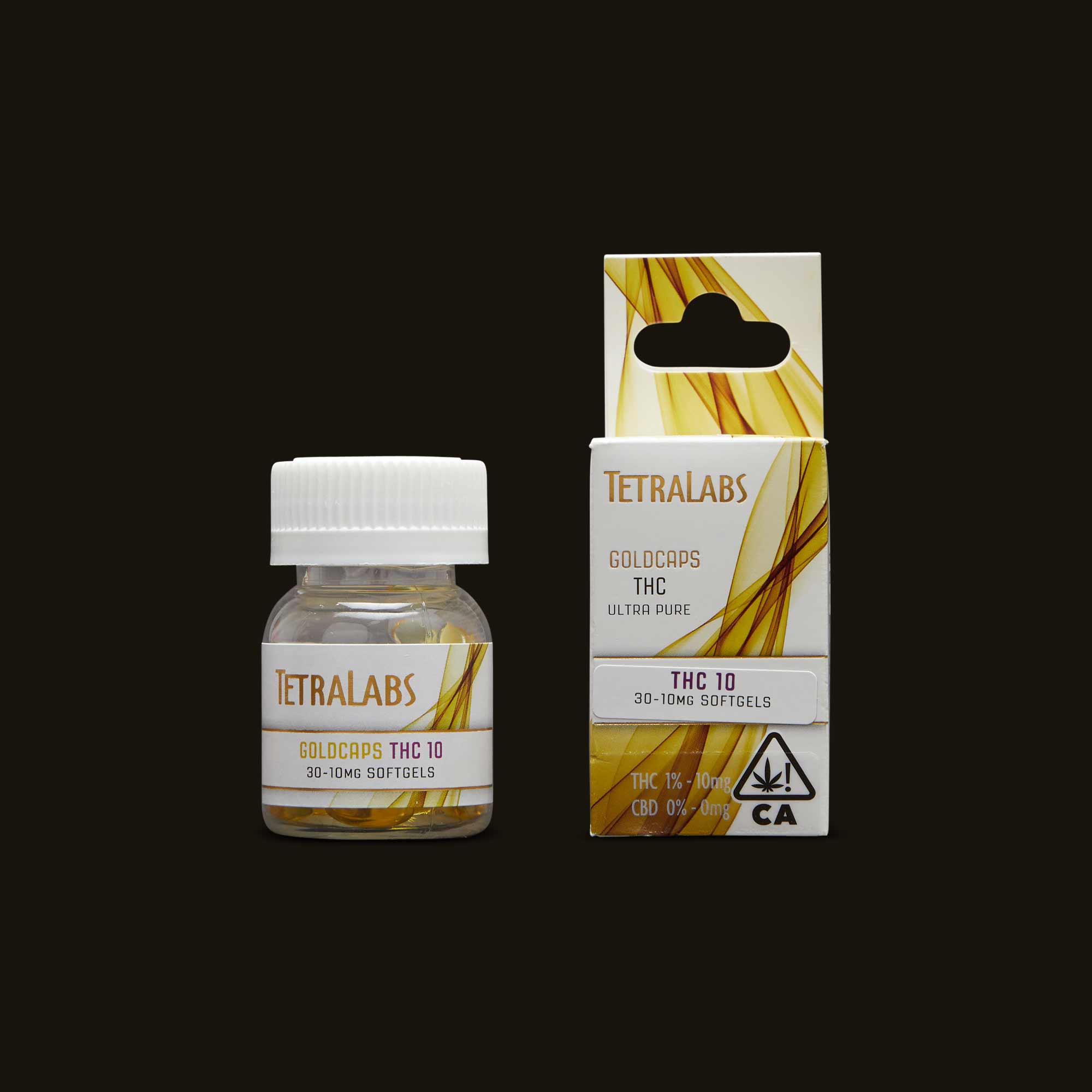 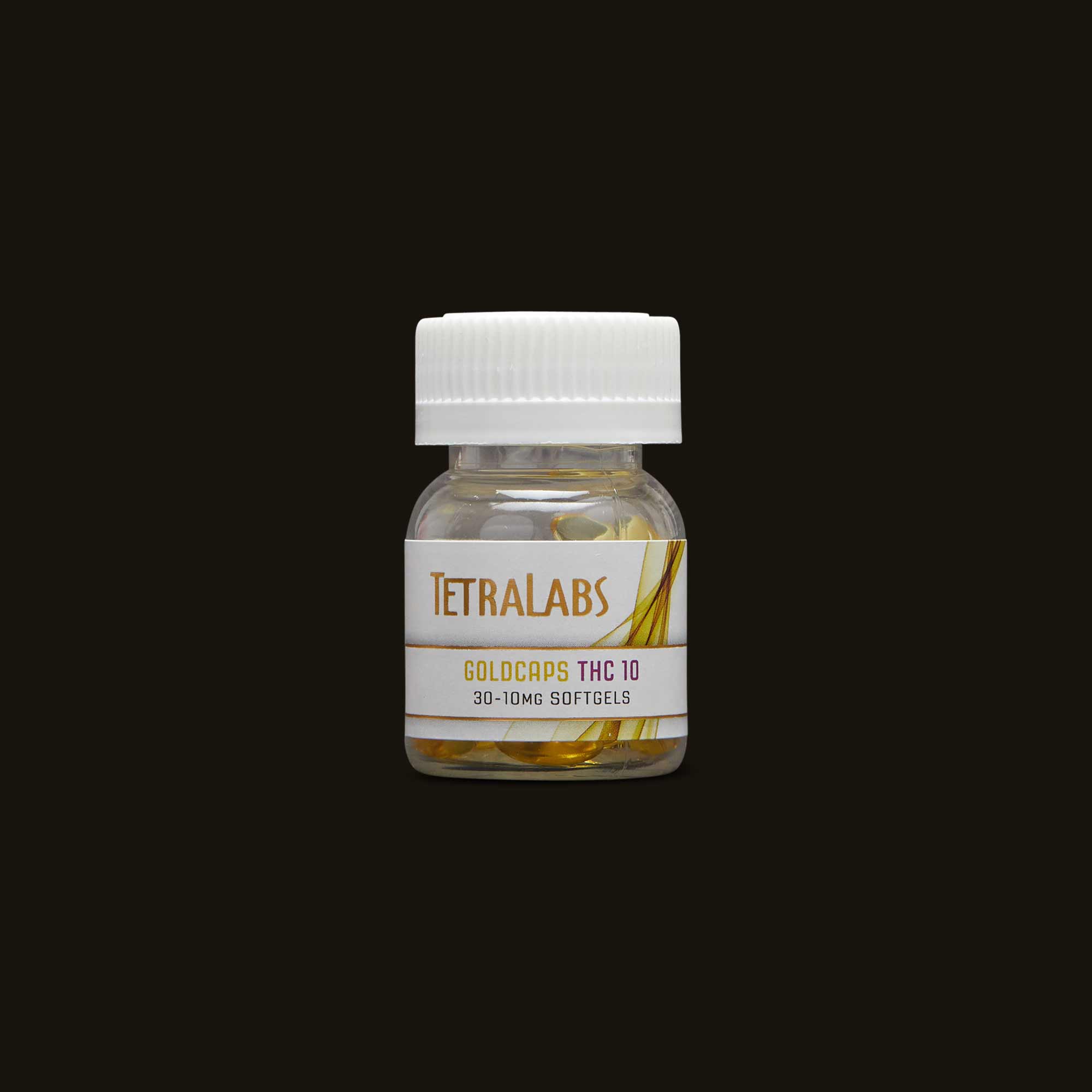 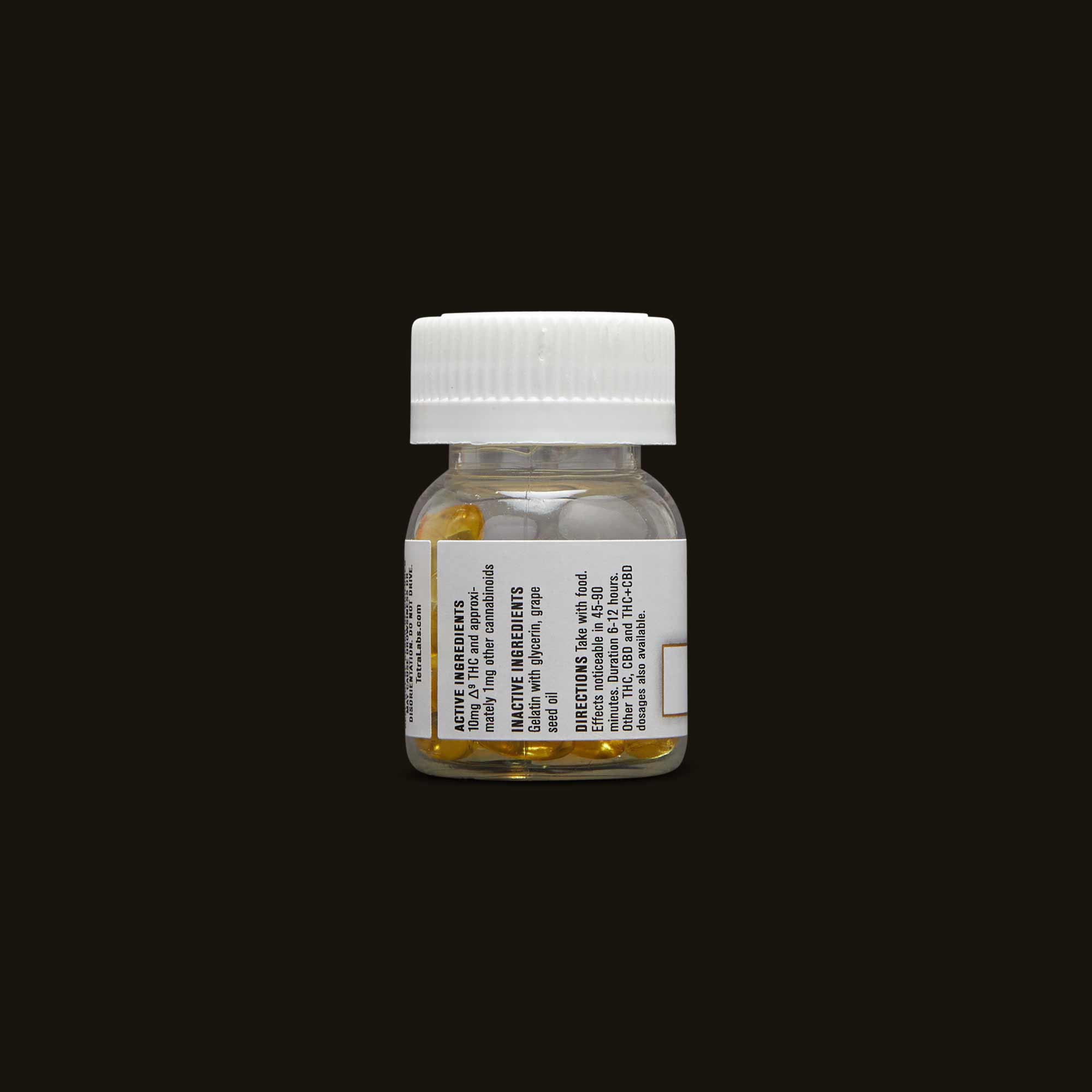 As our committee rates 10mg GoldCaps, we capture their experience in real time through our ratings app and report everything back here.

Ranked 17 of 28 in Pills for feeling Relaxed.

Quotes from the Raters

Feeling a body buzz and euphoric head high. Taking this on an empty stomach made the effects much more intense.

A Knockout Capsule Glitters With Possibility

IN REVIEW: TetraLabs GoldCaps are fairly mild to kick in with 10mg of THC apiece. Though light cannabis users beware, as our reviewer Madeline noted, these powerful capsules might send you on what feels like an intense Magic School Bus ride complete with a heavy, prolonged comedown and possible missing moments in your memory.

It was more than a productive day, and I was ready to relax. I grabbed the bottle that contained impressively sleek, translucent, golden-yellow gel caps. Each one was smooth and ovular, with a slight squish when squeezed. This was no jagged little pill I saw before me.

Made of grape seed oil, gelatin, and 10 mg of THC distillate, the smell of the TetraLabs GoldCaps is surprisingly potent. Just opening the bag filled my apartment with aromas of mango, nuts, and pine. I debated whether I’d be able to handle all ten milligrams. I know my tolerance pretty well, and if I’m not ready to go all-in, this decision at 7 p.m. on a Tuesday could be regrettable. The last thing anyone needs is an up-all-night bad trip.

“A million thoughts ran through my head, each one an entire universe of new ideas.”

Alas, there won’t be any splitting of this perfectly produced little vessel—it’s nothing but sweet nug nectar inside. So, I mustered up the courage and took the capsule down with some water. Slightly surprising due to the aromas, there was no taste at all. It also thankfully left no mouth residue or unpleasant aftertaste, not even a hint of something annoyingly “weedy.” As I was making red sauce for my chickpea pasta, the colors started to come to life. As is the process with any good meal, mistakes were made, and unnecessary risks were taken. I was a little clumsy with the dishes, and perhaps a bit too comfortable picking up crumbs from the hot stove.

The end result was amazing, food had never tasted so good! I wanted to chew more slowly than I’d ever chewed to milk every last bite. The flavor combinations were unforgettable as tandems like salty and savory + tangy and spicy lit up my flavor receptors like I’d won a jackpot at the casino. My body was even more attuned to my needs when I connected with my boyfriend later in bed. Cuddled up afterward, a million thoughts ran through my head, each one an entire universe of new ideas, new realities. I was definitely feeling high, but I was having real, layered insights about my personal life, too. My body felt incredibly soothed the entire time. There’s certainly potential for pain relief in this pill, as I noticed the buzz radiated through my skin and down into my sore legs.

“I was having an intense, euphoric trip that tapped into all seven levels of my ideal marijuana experience.”

Less than three hours after onset, I’d almost reached knockout status. I was in and out of a slightly overwhelming, but manageable state. I was having an intense, euphoric trip that tapped into all seven levels of my ideal marijuana experience. All five senses were heightened, a sixth was inhabited by creative thoughts and a seventh was doing its own thing with some fun, vision-shifting, borderline hallucinations. For instance, let’s just say the trippy galaxy picture of my face above my bed became a stellar Magic Eye that resembled my mother. Eek.

I fell asleep daydreaming at 9:45 p.m. only to pop back up at 1:30 a.m. It was that unfortunate type of wake-up when you’re still midway through your high and groggy. In the morning, there were still holes in my recollection, but it turns out I was a better cataloguer in the moment than I feared in the middle of the night. I learned from my wearable fitness tech that I hit that “deep sleep” threshold for much longer than usual: I got a full two hours after I passed out instead of the usual 90 minutes or less.

There was no way I could do that right away again the next night, though. So after another day, I took my second go-around on this “Magic School Bus” pill. This time, I rolled it across my tongue a bit before swallowing and found it’s actually sweet! After about 45 minutes,  I was really, really high. Trying to describe this would be a fool’s errand. My lack of words in the moment spoke volumes. It felt like the perfect time to go on a car ride, so I joined my boyfriend who was headed to see his brother to avoid having this level of a head trip in the apartment by myself.

On the road trip, out in the real world, I felt like I was seeing everything anew. From the fresh air through the car window, I imagined the invisible smells of fireflies. I examined my boyfriend’s face as if my partner were any man — a new boy to woo, or the happy endings that I never got to have in youth. Everything in life felt up for grabs again. Even though I had downed a full dinner on the drive over, as soon as we reached our destination I entered Munchy Town. I wanted nothing more than to play in a cabinet full of colorful, flavorful food!

Since it was my second time exploring with this gel cap, I agreed to the offer of a smooth glass of tequila on ice. This addressed my curious, sensationalist palate surprisingly well without putting me over the edge, either in my stomach or head. But overall, my head did hurt and my chest was tight, as I again rode the waves of intensity this capsule provides. I explained the experience with levity to my boyfriend’s brother, but it wasn't all glee in the body and mind.

The evening felt like it moved slowly, but suddenly it was two hours later, and I seemed to be coming to. All the while, I had faked social interaction impressively, but eventually, I was 100% engrossed in this Michael Jordan documentary. The power of his story seemed to calm me. Emerging from the metaphorical fog, we took a beachside walk in the tangible dew of midnight. It’s weird, but soothing, as I felt both detached and connected. I experienced it like a new moment from the past, both nostalgic and novel. I left with a slight lift in my tired step, which was enough to walk a mile or two before crashing (metaphorically) on the ride back across town.

In bed, I hit deep sleep hard again and woke up depleted with a headache. Even a day later, the cloud hadn't really left my brain or limbs, and I felt terribly unmotivated. Was the trip worth it? Sure, but for my sanity, it’s not a rabbit hole I’d go down more than once in a strange, blue moon.