Getting Shit Done
8AM Kickstart
Post-Workout 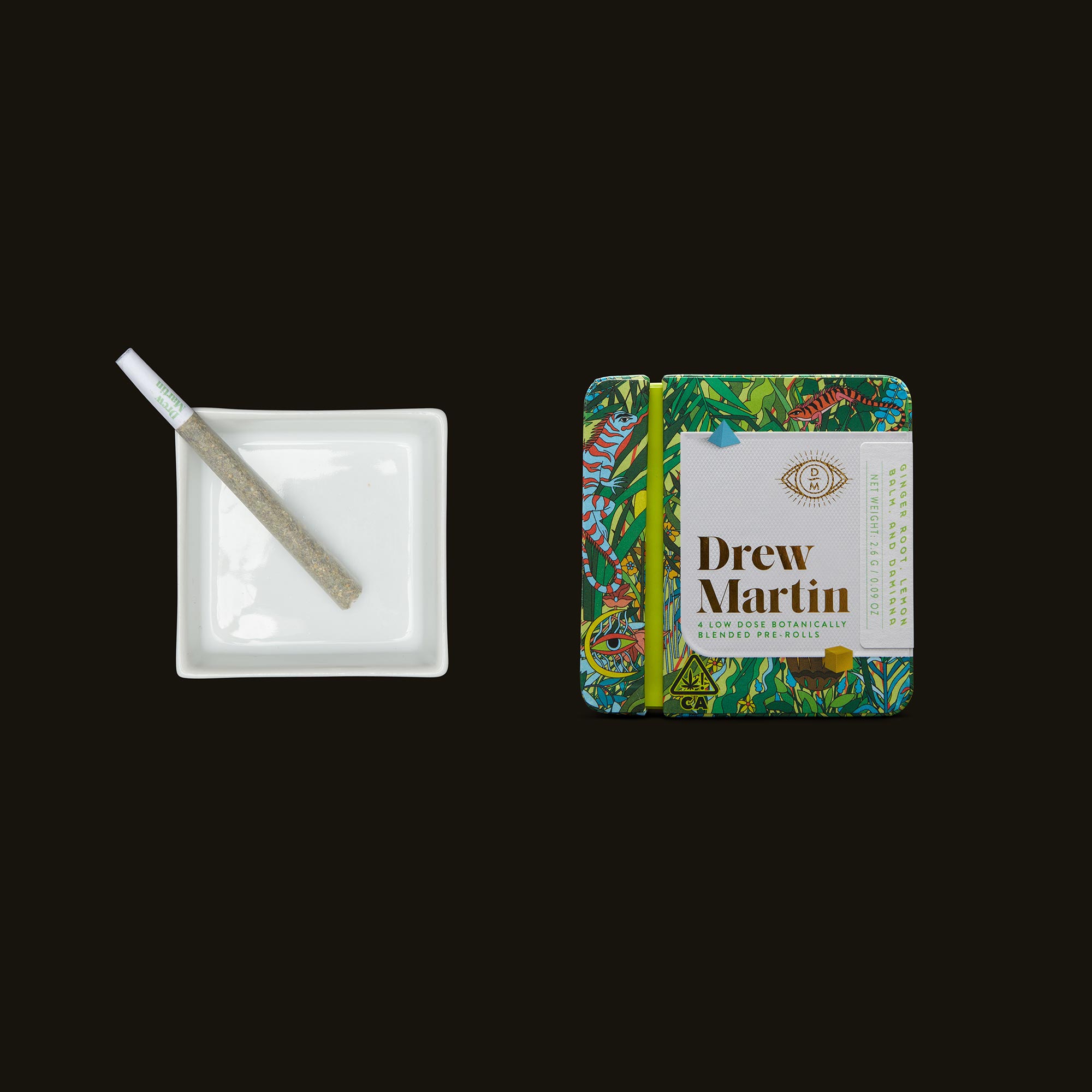 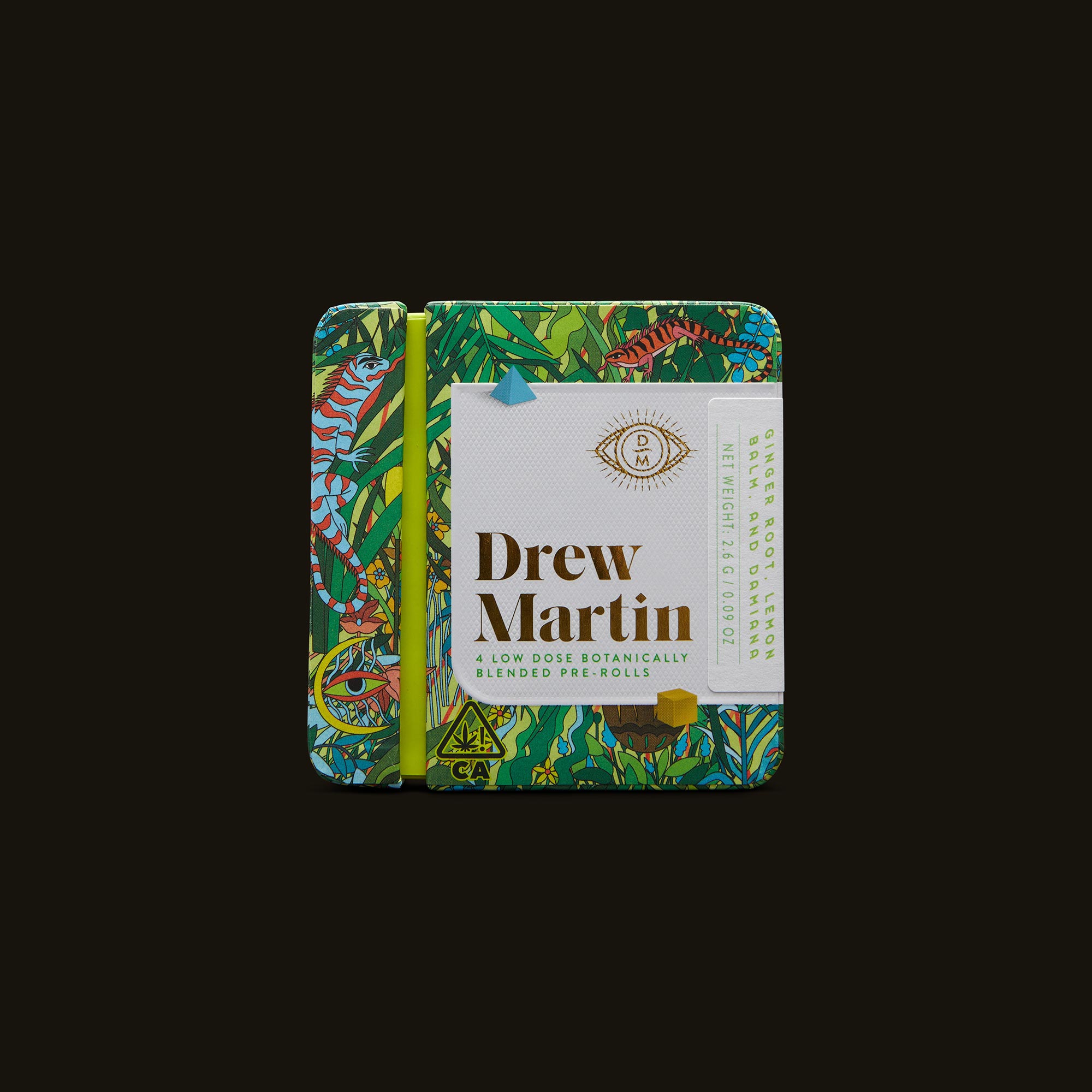 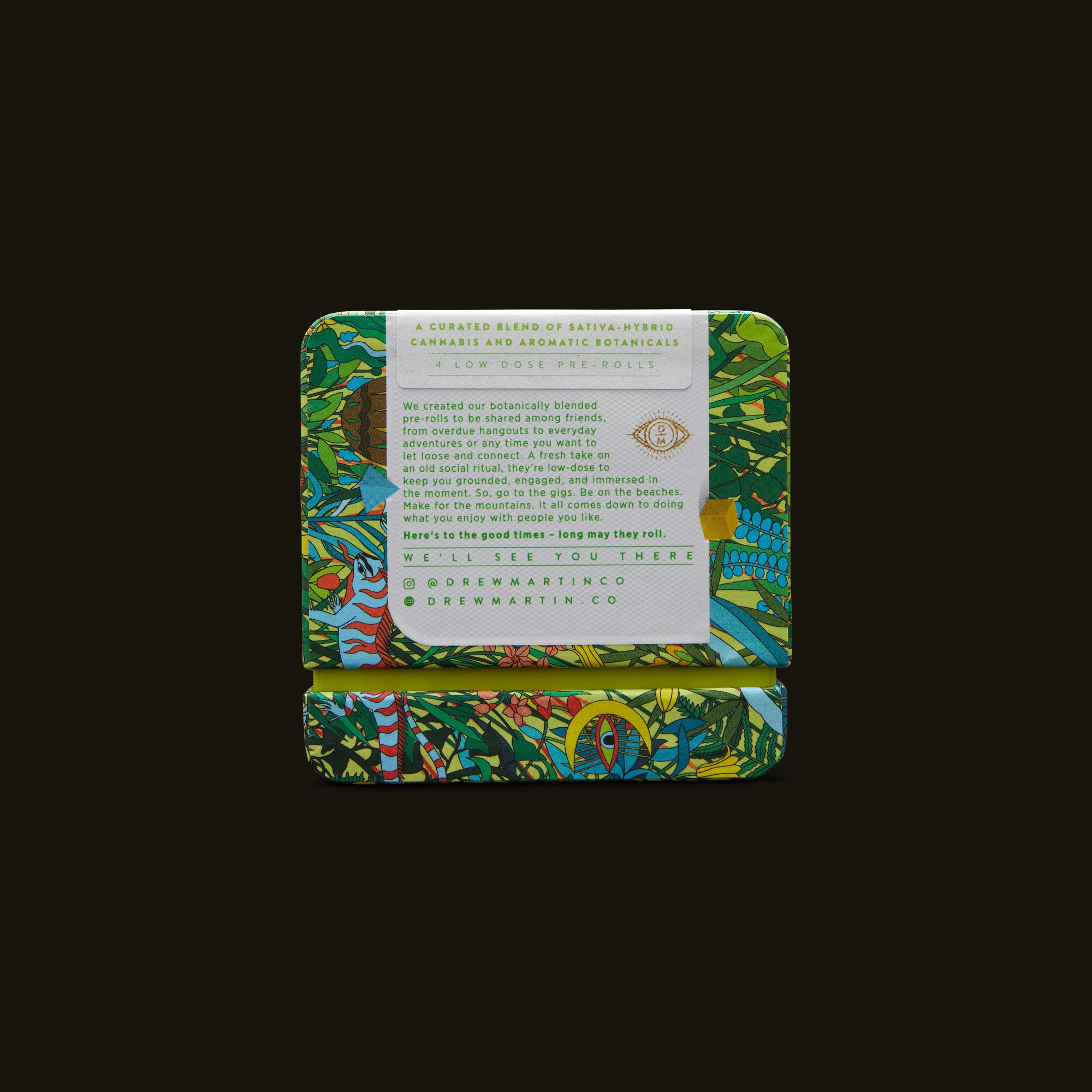 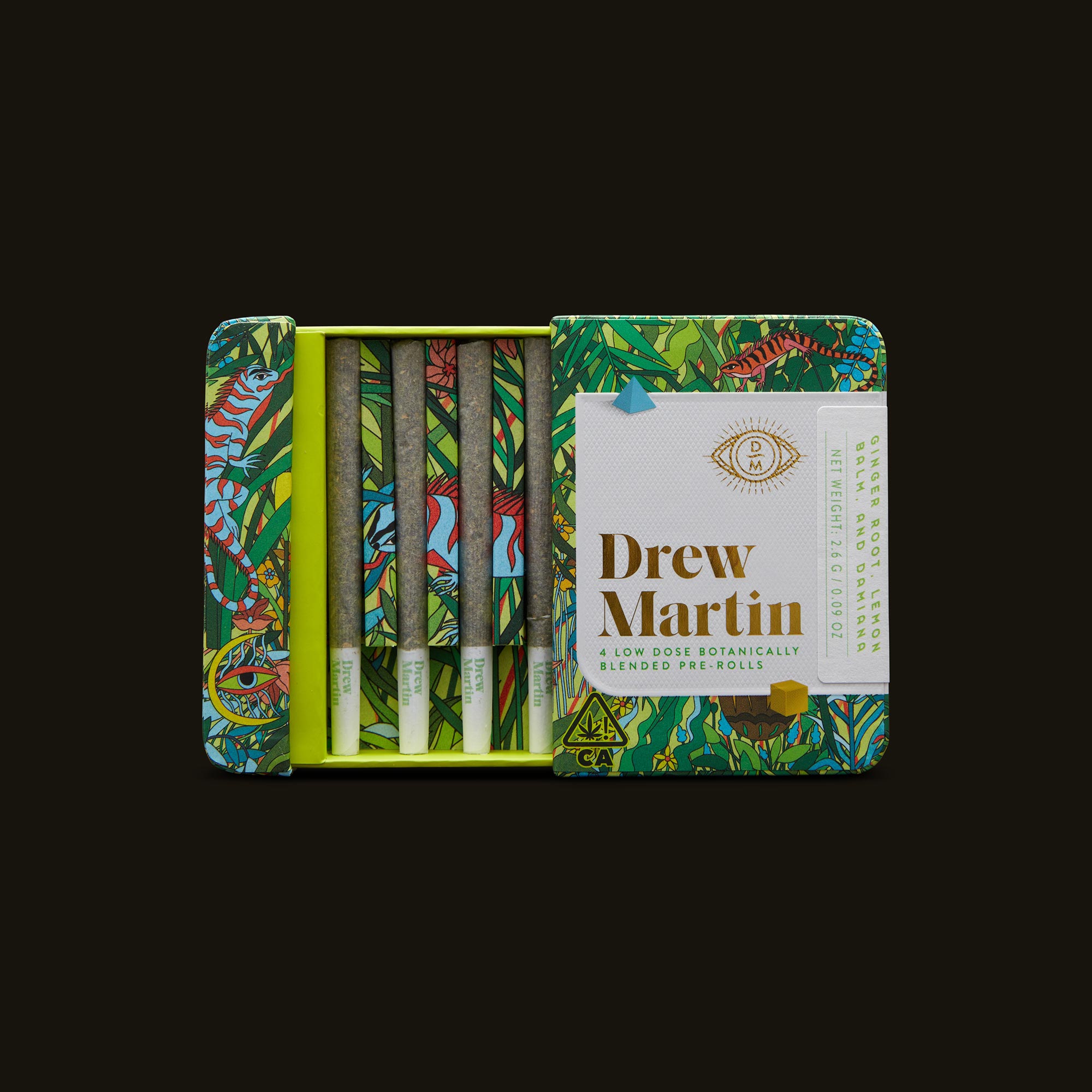 As our committee rates Ginger Root, Lemon Balm and Damiana Pre-Rolls, we capture their experience in real time through our ratings app and report everything back here.

Feel Good (But Not Stoned) With This Botanical Pre-Roll

Drew Martin’s joints offer a discreet and functional buzz that won’t put you down.

IN REVIEW: Botanicals being added to spliffs is nothing new, but it’s becoming more and more common as brands search for ways to differentiate themselves. This pre-roll packs in low-dose cannabis, lemon balm, ginger root, and damiana for a unique and tasty experience that’ll leave you calm and uplifted. The effects are perfect for pairing with coffee or tea to kickstart your day, checking items off of an ignored to-do list, and getting into nature.

In the world prior to the pandemic’s “new normal,” I had very little in common with stay-at-home moms. For one, I write about drugs for a living. Two, I have no kids. And three, I was rarely ever at home.

Flash forward a couple months, and boy how things change. I’m cooking. I’m cleaning. I have nowhere to go. And while I have no children, taking care of myself within the confines of my one-bedroom apartment has proven to be a full-time job, one that I’m often too stoned to perform properly.

While bong hits of uppity strains have proven a worthy companion for doing the dishes, redistributing dust around my living room, and trying to figure out how to use a mop without turning my kitchen into a puddle, sometimes being high backfires. Bored and listless, chores go undone as I fade into unkempt surroundings.

In this bizarre, twisted new normal, I’m a stay-home-mom to myself. A thirty-year-old woman who may or may not be in the early stages of losing it completely. While few things remain certain, one thing is for sure: this low-THC, herbal pre-roll helps take the edge off of getting shit done around the house, no matter how deep in the throes of apathy I‘ve become.

It was a day like any other. I had a bunch of work I didn’t feel like doing, and I needed to vacuum, again. In an effort to readjust my vibe, I reached into my bag of weed stuff to rate and settled on an anonymous pre-roll that didn’t smell like anything, oddly. It’s only defining characteristic to speak of was a simple filter that read “Drew Martin” in green font. Somewhat intrigued, I lit it up.

Strong notes of lemon balm overpowered any inkling that this pre-roll contained cannabis. When combined with the other herbal flavors, which I later found out to be ginger root and damiana, it was overall enjoyable, but again, did not feel like smoking weed. The rush of botanical ingredients transported me back to my high school days, where my stoner hippy friends and I would roll lavender and white sage into just about everything we smoked.

“While not a traditional weed high, the quite pleasurable feeling from this pre-roll hit a couple minutes into the smoking experience. ”

As the pre-roll market continues to explode, herbal smoking blends have begun to rise in popularity. Generally, they feature CBD flower, or flower with an extremely low dose of THC, a blend of botanicals geared towards novice users with bohemian aesthetics and affluent bank accounts, and set out with a general goal of making you feel good rather than getting you super stoned. Drew Martin, the brand as well as its namesake, seems to check each one of those boxes.

Drew Martin, a self-described “herbalist, mixologist, and wanderer,” seems to be a cannabis entrepreneur of the Trustafarian variety, one who’s spent the past however long traveling the world and chilling.

Their website copy reads, “Leaning into his knowledge of herbalism, a decade of world travel, and a refined palate from his time as an award-winning mixologist, Drew spent a year formulating a new kind of pre-roll.” It continues, “Blending cannabis with worldly botanicals, he curated complex aromas and flavors to evoke the good times he spent connecting with friends across the globe – from São Paulo to Seoul.”

The brand aesthetic continues to build on this kind of nouveau riche, Venice Beach, faux-bohemian-character who, like Elizabeth Olsen in Ingrid Goes West, may or may not have been in a frat or sorority mere years prior to popping on that wide-brimmed hat.

Occult-y symbols, hand-drawn eyes, and generally pretty chic illustrations create a psychedelic overtone in an Urban Outfitters kind of way. They do a good job of cultivating the kind of vibe that people who are paying for this product are seeking.

“I would tout this pre-roll as being great for work, cleaning, and becoming your own mother at thirty.”

And it’s not a bad product, either. While the joint doesn’t taste like weed literally at all, which I found kind of strange, the lemon balm is chill, and the ginger has a nice little pop at the end.

Which led me to feel that this isn’t really even a joint, but something else entirely. While not a traditional weed high, the quite pleasurable feeling from this pre-roll hit a couple minutes into the smoking experience. Exciting and fun, uplifting and alert, it was a welcomed feeling, and a great addition that lifted me into productivity.

Again, while I felt good, it should be noted that I definitely did not feel stoned. As opposed to recreation, I would tout this pre-roll as being great for work, cleaning, and becoming your own mother at thirty, thus making messes around your house 24/7 and being forced to find the energy to then clean them up. Full disclosure, I ended up dabbing like an hour into the experience because I got a little homesick for the feeling of being high.

It should also be noted that the hour of feeling uplifted was followed by a sort of dehydration headache, which is the biggest pitfall to smoking botanicals joint blends, and a feeling I very much remember from my days of smoking too many lavender spliffs in the waterfalls of Matilija Canyon.

Bottom line? These are cute, but I also feel that consumers should know exactly what they’re paying for. Seems to me they got pretty schwaggy weed, then covered the fact that there’s almost no weed in them with a bunch of herbs and botanicals, and then marketed them as low dose.

While yes, they are low dose, there are better options in this corner of the market, like pre-roll packs that actually make you feel good AND high, not just buzzy off a botanical headrush. But again, to each their own!

Be the first to review Ginger Root, Lemon Balm and Damiana Pre-Rolls from Drew Martin and help others find their high.