Ranked 48 of 283 in Pre-Rolls for feeling Euphoric. 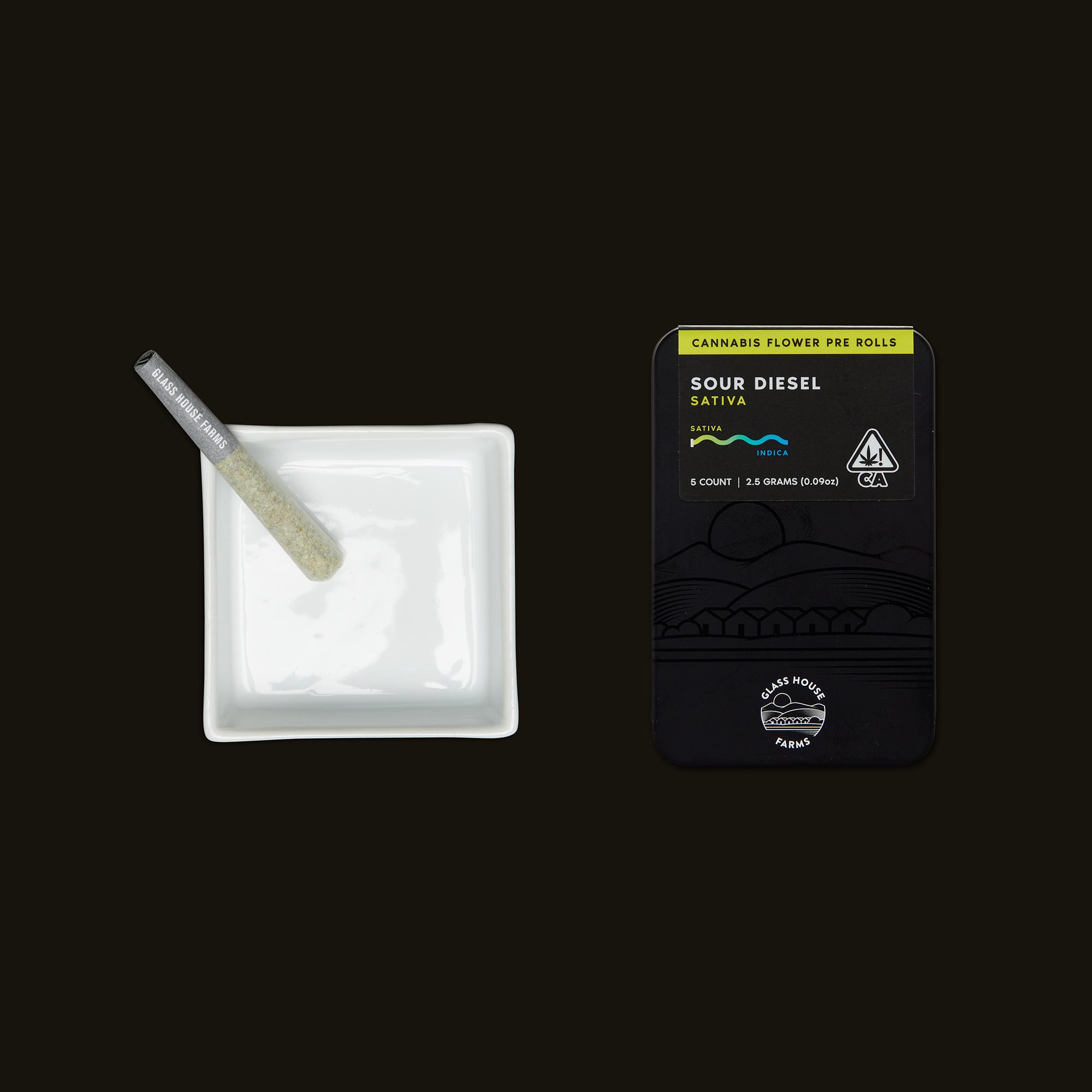 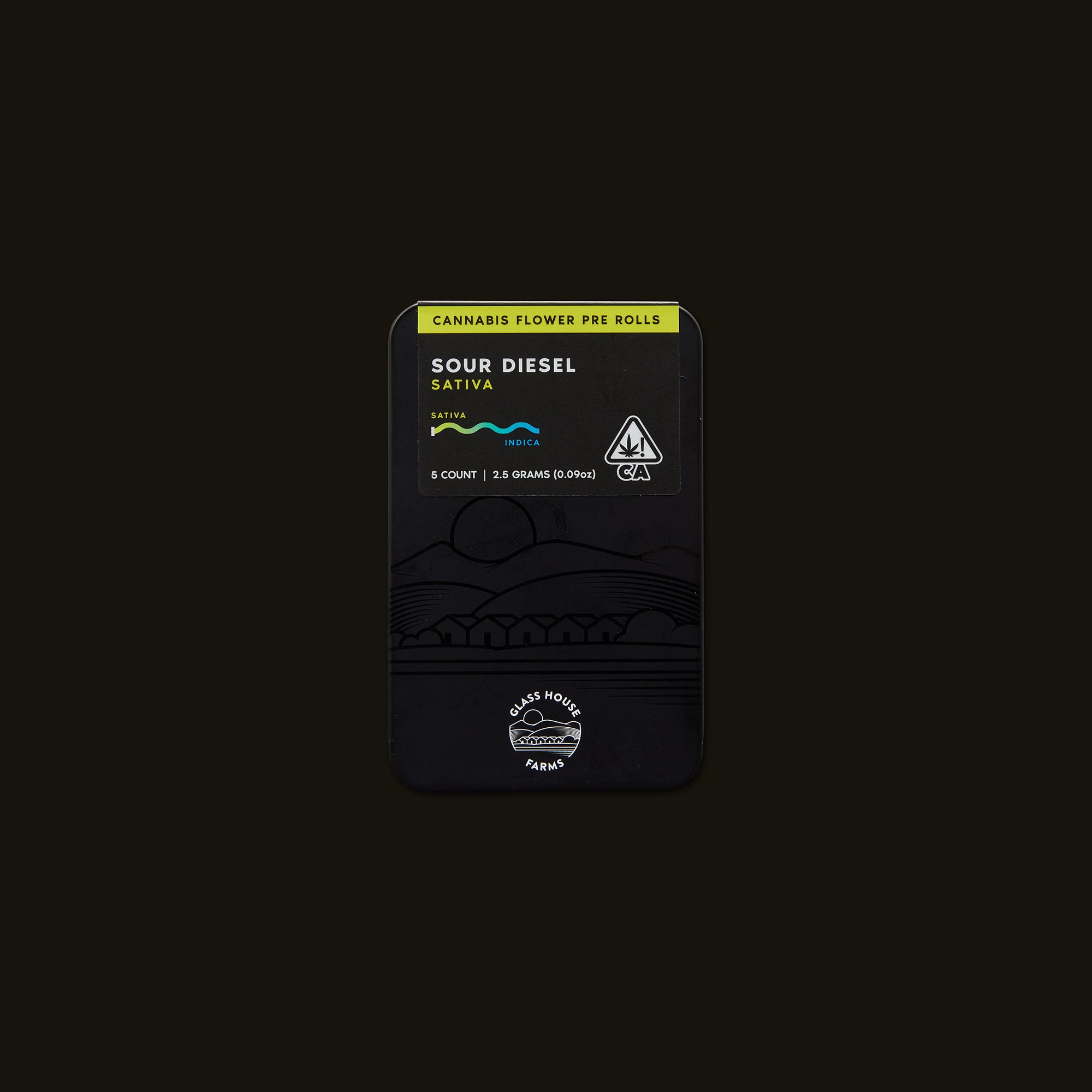 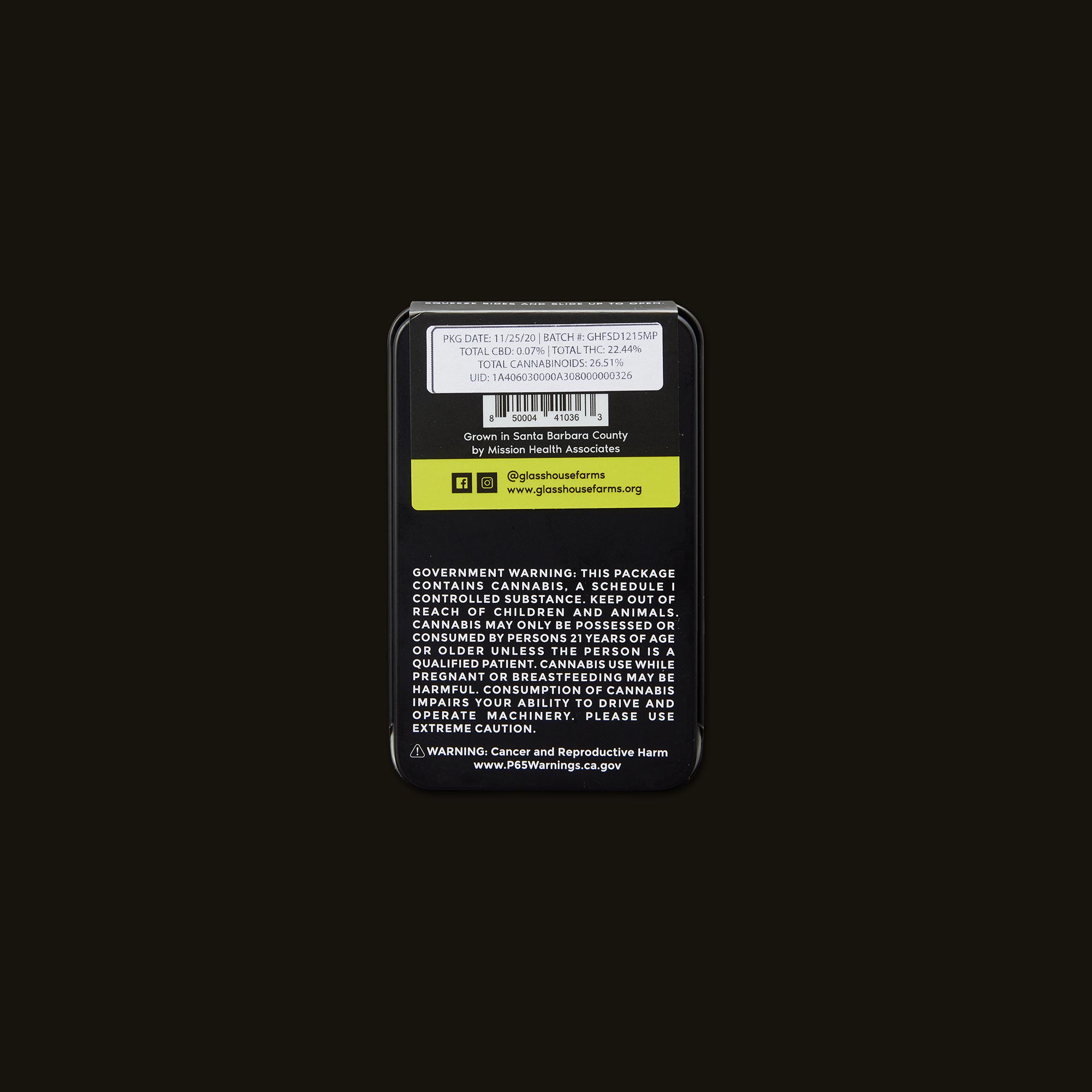 As our committee rates Sour Diesel Pre-Rolls, we capture their experience in real time through our ratings app and report everything back here.

Ranked 48 of 283 in Pre-Rolls for feeling Euphoric.

The Power Of Sour

Get your day started the right way with these energizing pre-rolls from Glass House Farms.

IN REVIEW: Each of these tins from Glass House Farms contains five joints filled with the fan-favorite strain Sour Diesel. With a half gram of flower per pre-roll and 26.5% THC, each of these minis is small enough to finish without sending you into outer space, but potent enough to make its presence known. Made with greenhouse grown flower in Santa Barbara, expect strong notes of citrus and diesel, and smooth pulls to leave you uplifted and loving life. Keep a pack of these handy to shine in social situations and crush to-do lists.

My first impression of these pre-rolls by Glass House Farms was that they’re the perfect size for me. Not too puny and not too massive. They’re the Goldilocks of joints. While a bit tightly rolled, each one still gave off a pleasing aroma of lemon and skunk, and tasted of sour flavored heaven. I enjoyed one early in the morning just as the sun was beginning to rise. I had a lot to do, and I was looking for something that would give me the morning boost I needed to tackle it all with gusto. To this end, the Sour Diesel pre-roll by Glass House worked brilliantly.

“Each joint got me into a meditative state that helped set the tone for a full day of running around.”

As a momentum builder, these are top-notch. Each joint got me into a meditative state that helped set the tone for a full day of running around. During this time, I laid out all I had to get done before heading out to work, while also making sure to set an intention of gratitude. This morning pick-me-up was quickly filling me with positivity and purpose. If you’re looking to combat some depression or just bust out of a rut, these Sour Diesel Joints should be able to help.

The energy it imbibed me with was just what I needed to help kick off an hour long workout session in the garage. Nothing like throwing around some heavy weights to the sound of 80’s dance music. The only thing I was missing was a pair of jean shorts and a Trans Am. My wife’s SUV and my Subaru would just have to do. After my workout, I washed both cars in record time and even swept the patio. I was feeling accomplished, and it wasn’t even 9am yet.

By this point, I’d finished what was left of the pre-roll, and began to chase my dog around the townhome complex. When I finally caught him, we were already halfway to the dog park, so I decided, “What the hell.” I chased him some more when we got inside the gates, and by that time I’d already earned my 10,000 steps for the day. The entire walk/run took on a sativa influenced vibrancy that catapults you out of the mundane. It made me feel much more present and involved.

Glass House’s Sour Diesel joints ignited what was fast becoming a hard-charging morning. By the time I got back home, I was fairly famished. I made a rather daring breakfast by attempting to poach three eggs, and I’m happy to say that my intrepidness paid off. All the YouTube cooking tutorials I’d watched were finally paying some dividends. Clearly, I was not only feeling amped up, but rather creative as well.

This high-octane party bus of a high finally started to shift into neutral after that hearty breakfast. I was still feeling pretty clear-headed, however, so I retired to the deck to catch up on some reading, and I was surprisingly able to retain information. Which is not always easy when high. As I was beginning to wind down to a base layer of sobriety, I was none the worse for wear, and was soon getting ready for a full day of work.

“There’s a lot of joy and happiness associated with this buzz.”

This flower comes in at 26.5% THC, yet it’s fully manageable without any of the jitteriness or anxiety that sometimes accompanies strong sativas. The flavor, aroma, and aftertaste is pure Sour Diesel, and it’s one of the best representations of this strain I’ve smoked to date. There’s a lot of joy and happiness associated with this buzz. I would take this to a concert, a party, or wherever there are like-minded folks looking to let loose. If you’re like me and like to work out high or attack physical chores with a little cannabis under your belt, these Sour Diesel pre-rolls by Glass House Farms are the next best thing to a caffeinated pre-workout shake.

Sour Diesel is both a legendary and nostalgic strain. I still remember the long lasting body high and euphoria it gave me when I first tried it 15 year ago, it still has that same potency today. This is one I will always recommend if you want to feel happy and be productive. SD is Top tier smoke!

Sour Diesel is my go to when I need to just unwind from a long day at work. With this strain, I don't care what form it's in, because it still does the trick. I use this to get my errands done & just to chill with friends and family. Quickly became one of my top 3 favorite strains. HIGHLY RECOMMEND!

Anytime I get it, I'm a happy camper. The problem is the lack of dispensaries in my part of NY. (They are just figuring out how to set these up). "My guy" gets it occasionally, and it's always worth the weight.

I love the diesel. It gets my motor running, and allows me to get things done (with a cheesy smile on my face). Once in a while it gives me a giddy sense of eurphoria. At the end of the day, it wears down into a nice state of relaxation. I get 8 hrs every time I have this in my stash.

Sour diesel is one of my favorites. Makes me feel energized, focused and almost euphoric. Gives me a nice little head buzz, and alleviated some lower back pain I was having as well.