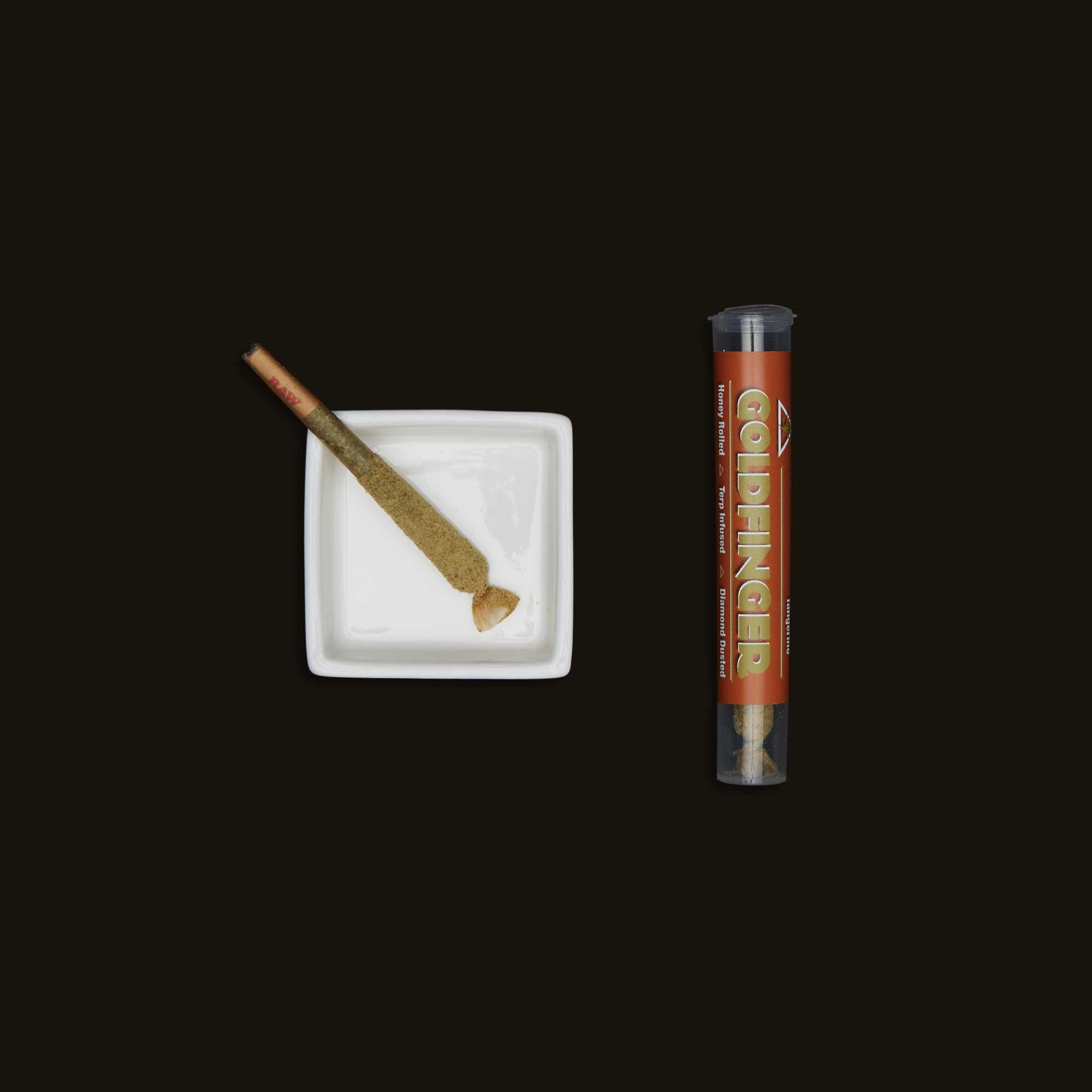 Goldfinger - Tangerine is a potent pre-roll with a tangy flavor of citrus. The calm, heavy high should leave you in a chill mood, so make sure you're in comfortable surroundings. This can be a pretty lazy high with a happy and sleepy comedown, so try it on a movie night.

As our committee rates Goldfinger - Tangerine, we capture their experience in real time through our ratings app and report everything back here.

As someone who struggles with depression and anxiety, I found House Of Cultivar's Goldfinger really enhanced my overall disposition.

As a daily cannabis consumer, my tolerance is reasonably high. This is no surprise. I’ve been smoking weed since long before it was made legal, and I proudly consider myself an experienced connoisseur. Frankly, as someone who's been around the pot block, even visiting my first legal dispensary felt sort of like I was swallowing my “stoner pride.” I was skeptical, to say the least. What did a legal cannabis storefront really have to offer a veteran smoker such as myself?

Well, novelty, for starters. At the dispensary, I found products I would not have otherwise had the opportunity to experience—or even access—if not for the impact legalization has had on Washington’s weed business. Enter oil-infused, kief-covered joints!

The first obvious feature you’ll notice with House of Cultivar's Goldfinger joint is its unique appearance. This pre-roll (which comes with a full gram of flower packed inside) is visibly coated in kief, the powdered trichomes, terpenes, and cannabinoid crystals that fall from flower buds as they’re ground up. It’s also worth noting that these connoisseur joints are not for the faint of heart. I would only recommend this product to a seasoned smoker with a high tolerance—AKA someone like me. In my experience, infused joints yield a cerebral high that I would not otherwise be able to achieve with a basic pre-roll or even a bowl. And if you're new to consuming cannabis, such a potent product—with high-strung sativa vibes no less—could definitely cause anxiety or paranoia.

“Citrus fragrances, including lemon, orange, and grapefruit, exude a sweet yet strong aroma.”

Have you ever taken a big whiff of a bag of marshmallows or freshly ground coffee beans? The aroma can be so enticing that you simply must have it. You’re craving nothing else. Your mouth waters. Well, that’s kind of what it’s like with this Tangerine strain of their Goldfinger joints.

The fruity scent was entirely inviting and mouthwatering. Citrus fragrances, including lemon, orange, and grapefruit, exuded a sweet yet strong aroma. I’m originally a Florida girl, so most citrus smells will immediately have me feeling tropical vibes. And the taste certainly did the smell justice, with strong citrus flavors presenting after the first inhale. A pleasant aftertaste lingered even though the pull was a bit harsh and led to some mild coughing. But, to be realistic, that's to be expected for such a potent joint.

Unlike other oil-infused pre-rolls on the market, this HOC Tangerine pre-roll doesn't run or “canoe," meaning it burns smoothly and evenly. I've had experience with infused joints that have actually melted into a sticky mess or became so resinated they were no longer smokeable. This joint is quite the opposite, it hits well and burns smoothly.

The effects began setting in almost immediately after I smoked just a few hits. That's also to be expected because the kief and oil likely contribute to such a rapid onset. At first, the sativa strain yielded a euphoric, cerebral high that led into a noticeable mood boost. As someone who struggles with depression and anxiety, I found this joint really enhanced my overall disposition. I felt generally better after smoking than I did before. The joint even made me chipper! And as the euphoria reached a peak, a sense of creativity was building as well—great for working on crafts or listening to new music. After smoking it, I kept finding myself swept away in song, seemingly lost in the music.

I enjoy strains that sweep me away and allow me to get lost in euphoria. But I also seek to replenish any spent creative juices. I would absolutely recommend House of Cultivar's connoisseur-friendly, kief-coated, Tangerine Goldfinger pre-roll, mostly because it treated my anxiety and stress. Now that's a high I always welcome.