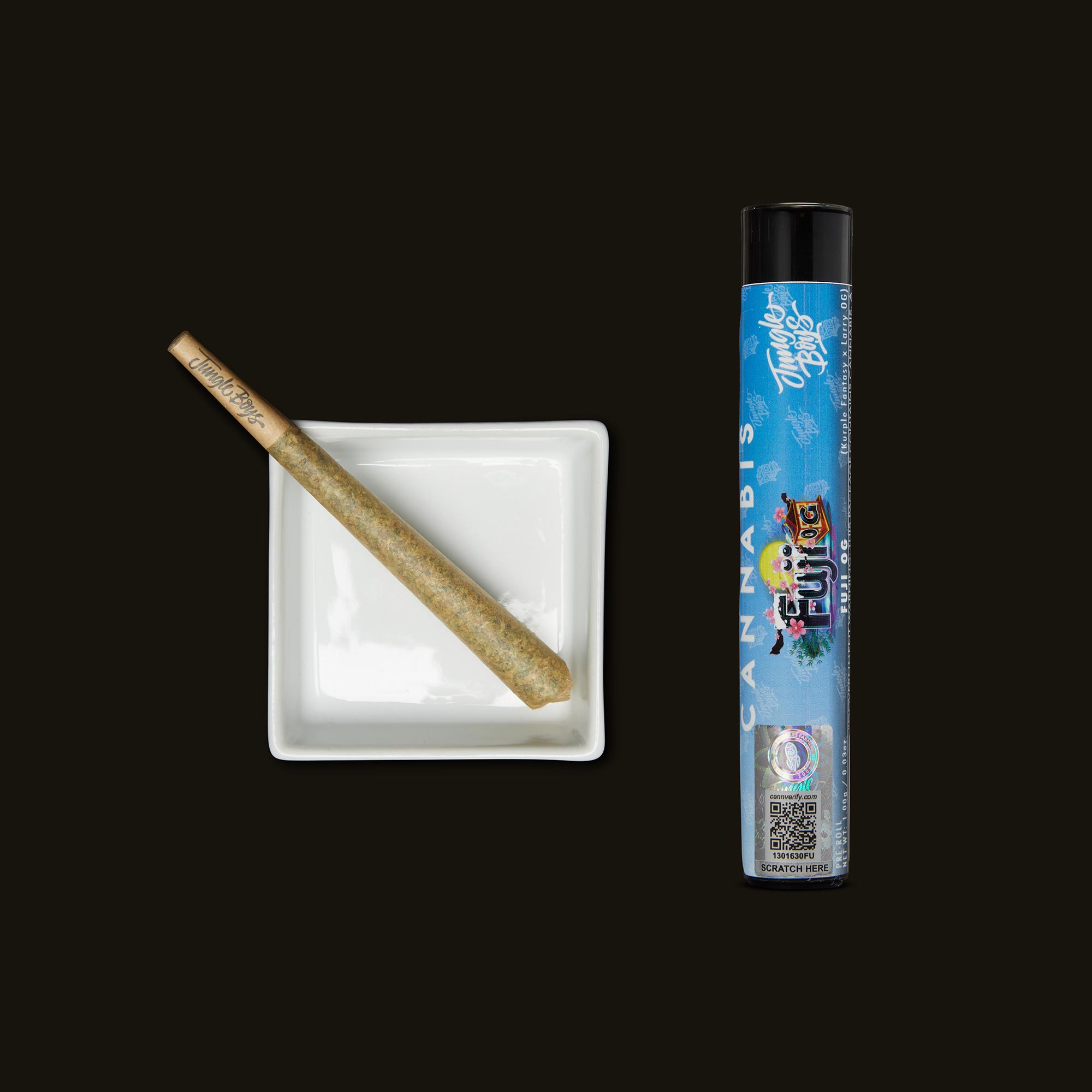 As our committee rates Fuji OG Pre-Roll, we capture their experience in real time through our ratings app and report everything back here.

Find The Peak With Fuji OG

IN REVIEW: The Fuji OG Joint by Jungle Boyz is filled with an indica-dominant hybrid born of a cross between Kurple Fantasy and Larry OG. This smooth-hitting pre-roll gives off an earthy and herbal aroma that tastes of savory herbs, and you can expect the predominant effect to be one of raw euphoria that’s bolstered by 23.28% THC. Though as with anything from Jungle Boyz, it’s about more than THC, and you can expect a layered, full-spectrum experience coupled with unmatched flavor—making it something to savor from the first pull to the last.

As someone who has tried many of Jungle Boyz flower selections, I can say that Fuji OG is easily in my top two. Which is why I was so excited to learn that it came in pre-roll form. It did not disappoint in the least. This generous one gram pre-roll delivers that classic OG Kush high that’s the perfect one-two punch of euphoria and relaxation. A true hybrid in every sense, this flower wowed me in its ability to excite as much as it calms.

“Before long I was brimming with positivity.”

Despite its mid to high range potency, I found this buzz was tempered by its ability to focus the mind. Before long I was brimming with positivity. It was almost as if I was too busy being happy to be bothered with anxiety or stress. I simply could not recall the definition of those words. I had hopped a ride on the one-track euphoria express and I would not be deterred. When a high hits me that certain way I instantly look towards the great outdoors and yearn for higher ground, both figuratively and literally.

After smoking merely a quarter of this cone-shaped goddess of a pre-roll, I placed it back in its custom Jungle Boyz tube and reached for my trail running shoes. If I was going to be swimming in euphoria, I would not waste it trapped in a never-ending cycle of Law and Order reruns. I was already under the influence of a different sort of one-two punch, and that of New York street justice and the legal machinations that accompany it would have to wait another week. This high demanded grander horizons, so I hit up a local hiking trail in search of getting lost.

The weather was close to perfect, and this high was helping me tap into a rhythmic state of mind that just transported what was a mere hike into a singular wind of positive energy. I would not be deterred. To speak to its analgesic effects, I felt exceptionally loose and free from pain. I glided up the trail like an aging gazelle, and when I got to the scenic vista at the top, I rewarded myself with a few more puffs from the Fuji OG Pre-Roll. I’m the sort of smoker who loves nothing more than to engage in physical activity when high.

“I was running on pure euphoria from my second sesh with this pre-roll.”

Something about cannabis allowing you to reach a flow state is what gets me. I reached that state with this Fuji OG, and I continued to stay in that state when I ripped back down the trail at a quicker pace, listening to Meat Loaf’s “Bat Out of Hell.” I was running on pure euphoria from my second sesh with this pre-roll. It does not take much for this toke to get you well on your way to Happy Town.

I would recommend this pre-roll wholeheartedly to stressed out individuals and even chronic pain sufferers. Not only did I feel as light as a feather, but it managed to quiet the storm that had been plaguing my stomach from a very spicy Nashville style hot chicken sandwich I had the night prior. In fact, I had two of those sandwiches, and if you had told me in the morning that I would be running six miles in the afternoon I would have reported you to the Better Business Bureau for doing a terrible job of telling the truth.

“It put my pain and stress on the back burner.”

The thing about this Fuji OG is that it doesn’t listen to the part of you that likes to say yes to two or three Hot Chicken Sandwiches before bedtime, and only listens to the part of you that says yes to living life to the fullest and yes to raw nature. It put my pain and stress on the back burner and gave life to my earnest desires to get outside and run through nature back like they used to do in the Babylonian times.

Were it not for this high I would have just stayed home and felt sorry for myself. Some people would say that cannabis has the opposite effect on people—that it makes them lazy and apathetic. All I have to say is that those people haven’t tried Fuji OG by Jungle Boyz. It’s the ultimate feel good high, and wind in your proverbial sails.

Be the first to review Fuji OG Pre-Roll from Jungle Boys and help others find their high.