Korova's Super Silver Haze Pre-Roll has a salt and pepper flavor with a smooth texture. The resulting high is typically euphoric and energized, so this is a get-things-done kind of buzz. It tends to be pleasantly strong in the mind without getting in your way physically, which is a good combo for cleaning the house or running to the gym. This joyful burst of intoxication soon simmers down to a bubbly buzz as you're left with a fresh outlook on the day.

Ranked 96 of 283 in Pre-Rolls for feeling Euphoric. 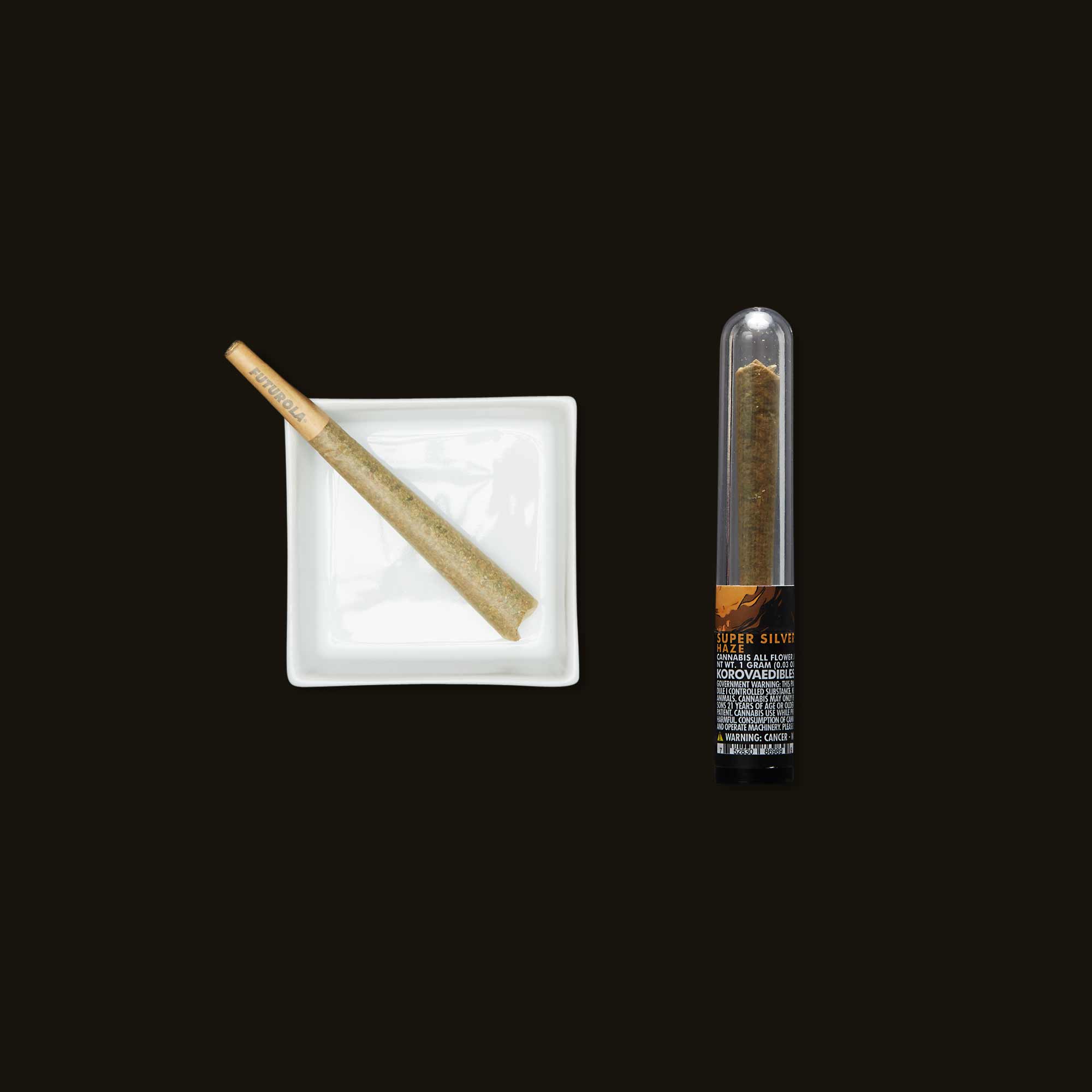 As our committee rates Super Silver Haze Pre-Roll, we capture their experience in real time through our ratings app and report everything back here.

Ranked 96 of 283 in Pre-Rolls for feeling Euphoric.

Did This Introspective High Just Make Me A Better Person?

On a day that could've barreled downhill and then some, this pre-roll lifted me up—and then some.

IN REVIEW: Not all pre-rolls can turn a frown upside down, but in the case of Korova’s Super Silver Haze pre-roll, that's exactly what happened. The next time a bad mood strikes or the frustrations of the world have you down, reach for a few puffs of this pre-roll.

Korova’s Super Silver Haze came to me in the form of a pre-roll. The high came in the way of a fractured sense of self. But first, the puff. To neglect to mention the smoothness of this smoke is to neglect smoothness in aeternum. My anticipation for the first signs of being high was overcome by the peppery and herbal deliciousness of the smoke. It was a good first lesson in staying present and one of many worthwhile detours taken during this ride.

As a fan of Hazes of all stripes, I had lofty expectations. Rarely does it disappoint. This strain, originally bred by Green House Seed Company, came to prominence in the late ‘90s, just as grunge music was making its way out and East Coast hip-hop was making its way in. After winning several Cannabis Cups, it has since toiled as an elder statesman amidst an influx of exciting new buds on the block.

“The more you dig, the more wonders rise to the surface.”

Lighting up this joint was akin to cleaning out your grandmother’s attic and stumbling across an old milk crate marked “heirlooms.” The more you dig, the more wonders rise to the surface. The payoff was almost instant and allowed me to take a healthy accounting of my emotional state of mind. It was the type of morning where bad news was being delivered at rapid-fire and by lunch, I was already waving the white flag. This Super Silver Haze one-gram pre-roll by Korova was really the last line of defense before resigning myself to a day of anger and self-pity.

If my reaction to this strain were an old Hanna-Barbera cartoon, it would work something like this: You would see a silhouette of my torso centered by a red, pulsating brain. The smoke would wind its way around my head and form the long arm of a wizard holding a magic wand. With one good shake, an electric surge would envelop me and I’d be born anew. In other words, this high totally turned my mood around.

The complete one-eighty in mood was a stark reminder of why I choose to get high in the first place. It’s all about trusting the intuition that you don’t need to wallow in negativity and self-harm if you yearn to be free. It was that sort of recalibration that sent me down a road of clear-headed insights and moments of genuine atonement.

One of the first things I did was call my wife to apologize for being a jerk earlier in the day and making everything about myself when it was she who needed help. That felt pretty good so I decided to double down and reply to the manager of a local restaurant who’d reached out to me in regards to a negative review I had left on Yelp. (I’m middle-aged and white so I leave Yelp reviews. Mea culpa.)

Had it been earlier in the day when I was filled with self-loathing and bitterness, I would have challenged that man to a duel at sundown—but not while high on Super Silver Haze. What followed was the act of a man I hardly knew. I expressed contrition for rushing to judgement and for wanting my pain to be his pain. The manager’s reply was no less conciliatory and he expressed a genuine desire to comp my next meal. It was a valuable lesson in having a grown-up exchange based on mutual respect and propelled by a day high that was adamant I tread lightly and create no further animosity.

“If you are suffering from stress, non-chronic depression, or just living in anger, you could hardly do better than this.”

It was this realization that gave way to a rush of excitement that is a calling card for this sativa strain. I let it carry me to the literal top of a nearby hill overlooking the Conejo Valley. It was a five-mile hike in the blaring heat that was littered with reflection and exuberance. Aided by a Pandora station set to Colombian salsa music, I ran back down the hill to the beat of a language I hardly knew but understood all the same.

There is an electricity that runs through this strain that can be tapped into if you are willing to give yourself over to it. These are moments of genuine and unbridled euphoria as fleeting as the wind on my face. If you are suffering from stress, non-chronic depression, or just living in anger, you could hardly do better than this iconic bud.

This was a long-lasting high that never ventured into the territory of grogginess or anxiety. While it firmly held its sativa ground, there were many times I found it sitting peaceably between both poles. Moments of sheer joy would give way to quiet introspection and all the while I felt like it was presenting me with a choice. One where I could continue to try and bend the world to my whims or one where I could revel in the magic that is at once elusive yet all around us. It just took a gram of Super Silver Haze to help uncover it all.

Be the first to review Super Silver Haze Pre-Roll from Korova and help others find their high.