Cannadips' American Pouches are unique little sublinguals that imitate tobacco dip. This one has an earthy clove flavor, but the aroma is almost like a strong curry. The consumption method (placing a pouch between the gum and cheek and waiting for it to goop in your mouth) is not popular with everyone, but this could be a great option for tobacco-quitters or people who like to dip. The high is often nice and chill, perfect for some deep stretching or soothing aches.

Ranked 57 of 108 in Sublinguals for feeling Relaxed. 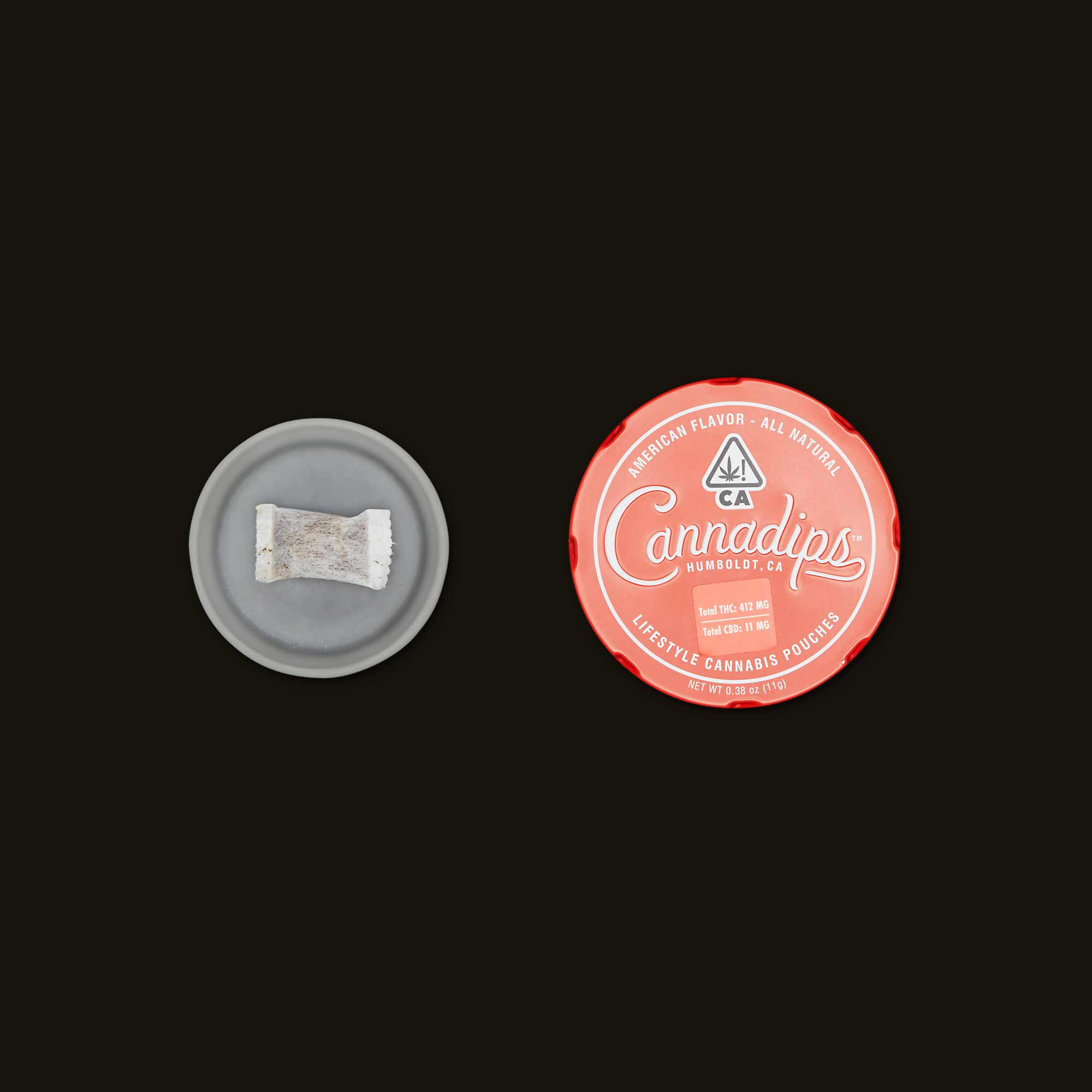 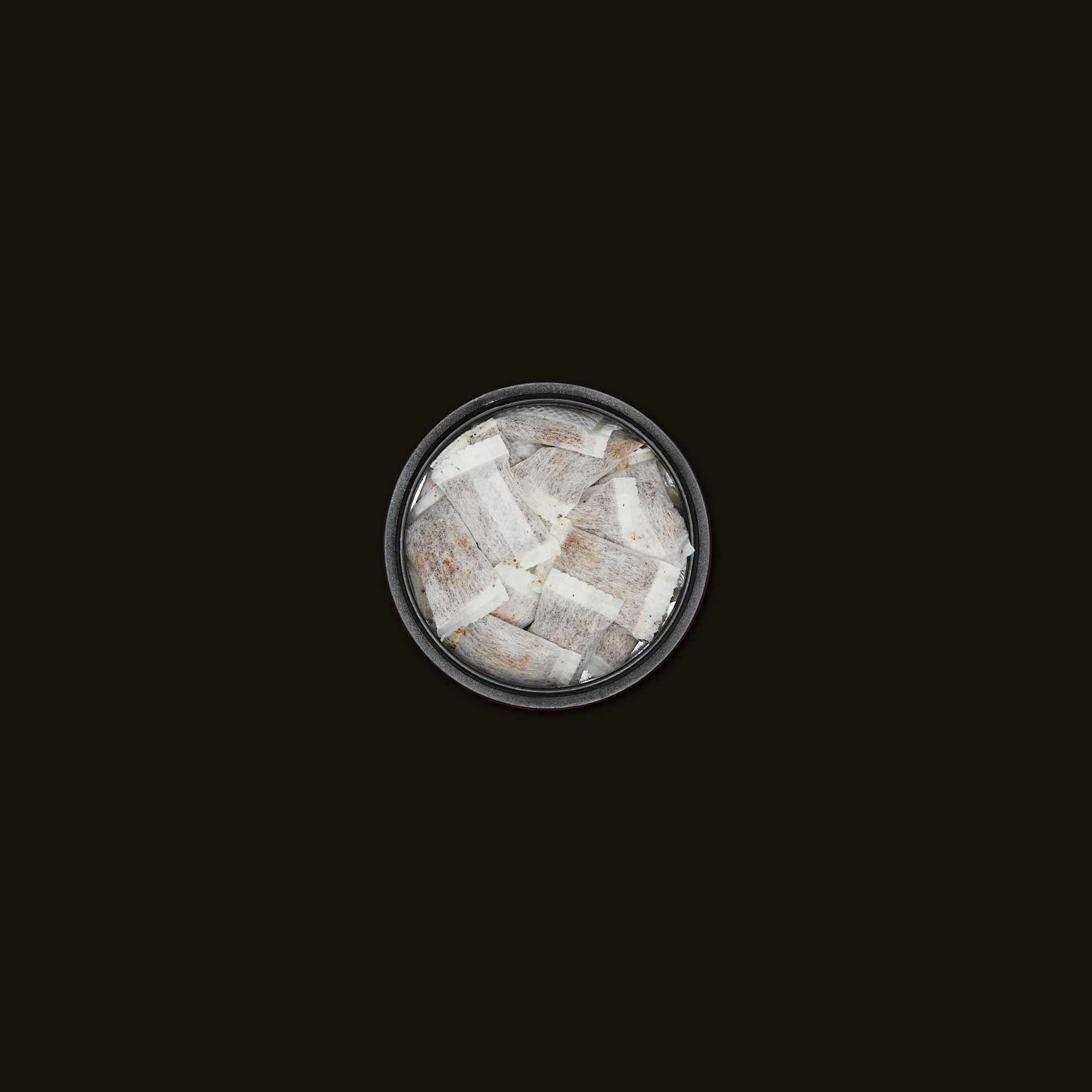 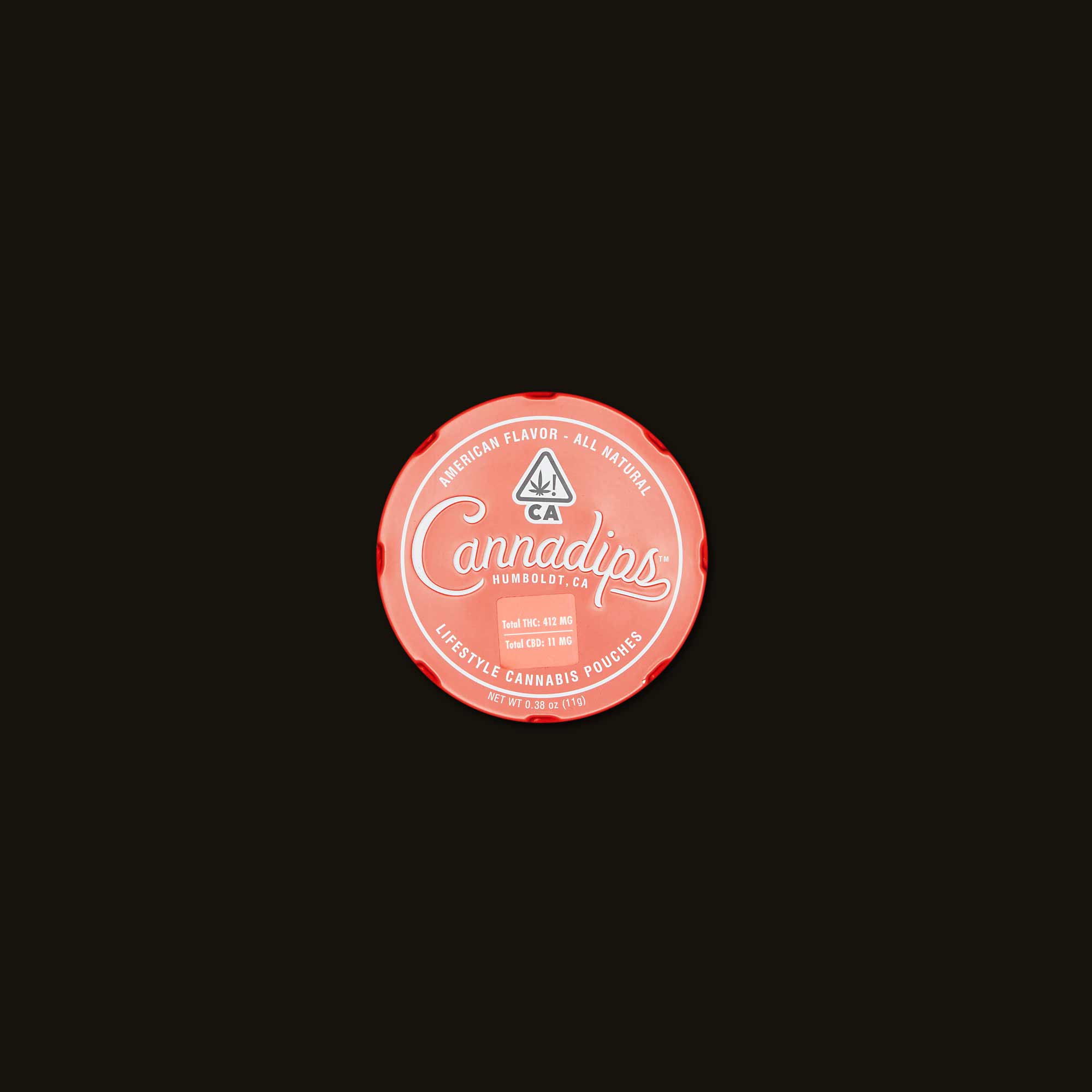 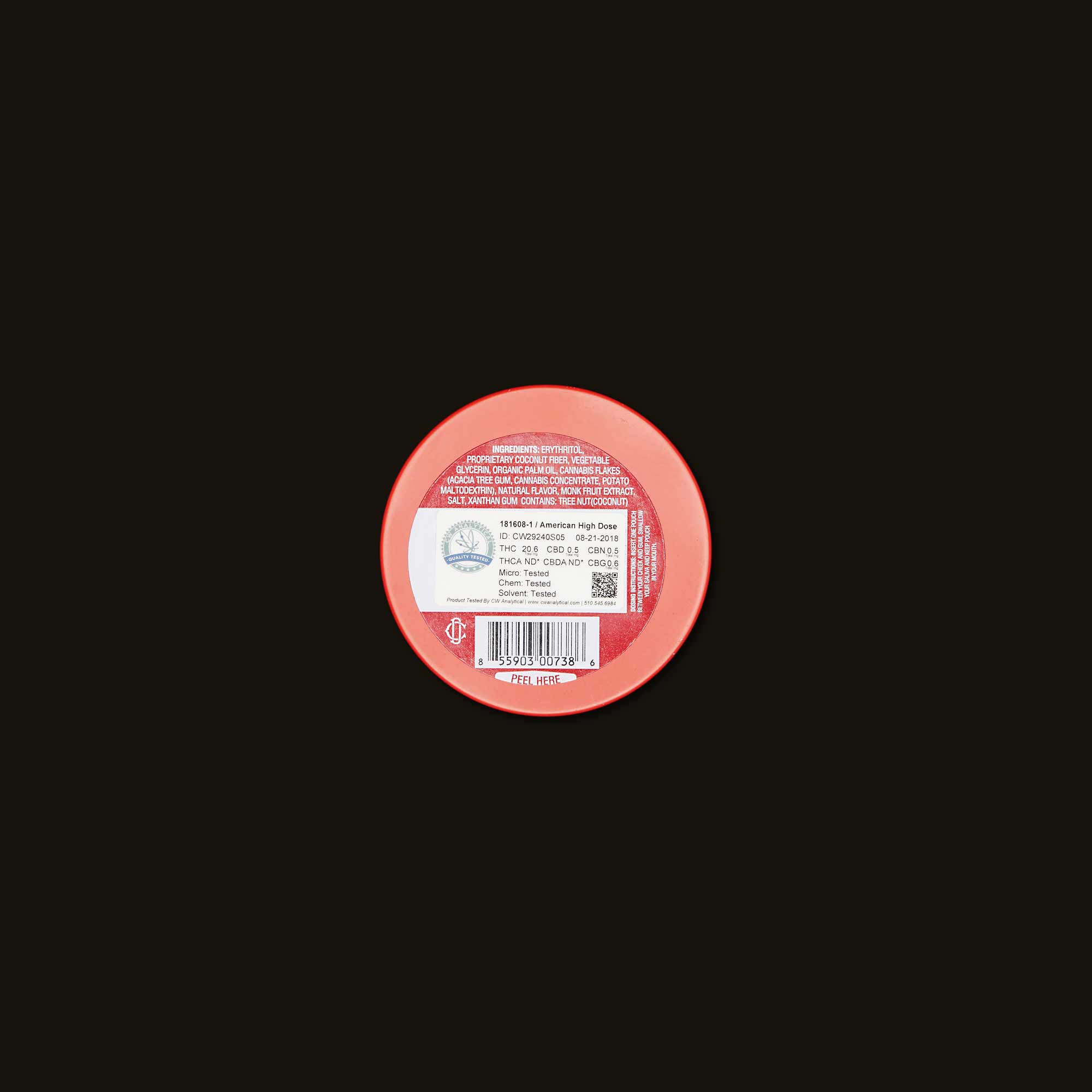 As our committee rates American Pouches, we capture their experience in real time through our ratings app and report everything back here.

Ranked 57 of 108 in Sublinguals for feeling Relaxed.

Is It A Cannabis Pouch Or A Gateway To A New Reality?

I got my sister to join me on a cannabis-pouch-fueled shopping adventure. You'll never guess what happened next.

I arrived in Los Angeles after a two-day road trip from Portland Oregon to find these delightfully eensy paper bags waiting. At first blush, I thought they were teabags, tiny sacks full of gunpowdery detritus, a fragrant blend of earth, anise, clove, and a hint of ginger. My sister, another Proper Cannabis Committee rater, was sipping a cup of hot tea brewed from one of these tiny bags. Her assumption that this was a tea bag came honest, the missing string/tag combo dripping from the edge of her mug was maybe the only indicator that this was, in fact, not tea. And after learning the true nature of this product, we both scratched our heads at the idea of just letting this sack sit between our cheeks and our gums, such is our familiarity with “dip” or “snus.”

Cannadips are a singular product in the ever-broadening recreational cannabis landscape because Cannadips are the stoner approximation of snus. If, like me, your knowledge of non-cigarette tobacco is limited to an old west cowboy caricature or a corrupt white southern sheriff caricature then, like me, you will also wonder what the modern appeal of this product is. Their website seems to be grappling with the same feeling, a mosaic of stylish Instagrams and a short video full of beautiful people, none of whom I can see actually using this product. Date night lovers with mouths full of snus? No. Manicured fingertips shoving snus between their cheeks at champagne brunch? Hell no. Passing a can of canna-dip around a bonfire as opposed to passing around a twaxed pre-roll or classic blunt? NOPE.

“Cannadips are ringers for classic snus aside from the content.”

But these are all reactions to the concept, not the experience. If you don't know (I sure didn’t), snus are a moist form of smokeless tobacco that’s huge in Scandinavia. Each serving is packed in a gauzy paper sack meant to be held in the mouth, not unlike dip tobacco, but without the excess saliva necessitating the constant need to spit. Cannadips are ringers for classic snus aside from the content; 10mg of THC in each sack, with 15 packages to a container.

My sister’s accidental Cannadip teabag had left her with what looked like a very placid, very manageable high. It was when I pulled my own rating prompt and began my first foray with Cannadips that we learned how Cannadips are to be used; sublingual, the instructions read. I placed one pouch under my tongue and began to salivate, activating the (inexplicably) “American” flavor, a rich, herby profile that would have been perfectly suited to a bowl of Vietnamese pho or Indian biryani rice. I struggled to place these flavors in a definitively American dish, and I remain perplexed by the designation. My mouth watered, activating the gluey residue of the coconut fiber paper. The more I salivated, the slimier my mouth became.

When the high blossomed (after about 10 minutes of unsettling mouth feels) it was just as placid and manageable as I had expected. The head high was a gentle softening, barely blurring the edges of reality without altering my perception. The body high was a slight buzz, the type that can keep you from cringing while shopping in a crowded Target four days before Christmas. I found the high to be calming and auspicious, elevating both my mood and my tolerance for the frenzy of the Xmas season. It lingered through an hour-long Target trip and a pretty comprehensive unboxing session—about an hour and a half of mild, inscrutable, mood elevation for one slimy sack. Not bad.

My sister and I shared notes on the end of day one, my trip only a few hours behind hers. I told her I had used the dip sublingually and what precisely that meant. This convo (and subsequent roasts of the few people we knew who “dipped”) informed her understanding of sublingual usage. On day two, she straight up cracked the bag open and placed that dusty cannabis tisane between her cheek and gums until it eventually crept down her throat.

“Wait, where are we? What are we doing?”

I should note that my sister and I have polar opposite physicalities. She is petite and lithe, and I am an Amazonian drag queen (I’m all boobs and legs, she’s like a Polly Pocket come to life), so the following disparity of our day two experiences can be attributed, at least in some part, to the disparity in our body types.

On day two of testing Cannadips’ American Pouches, just as my sister and I began to feel the effects, she looked at me with deeply bloodshot eyes that only a few seconds ago had been clear and bright and said, “Wait, where are we? What are we doing?”

Laughter bubbled up from my pelvis and erupted, echoing in the aisles of the supermarket we were aimlessly wandering. This was my onset: easy, bright, and gentle as a snowfall. Hers was a violent shattering of her reality. The onset, she said, made her feel, for an instant, that she was dreaming. She was fractured, something we both associate with over-consumption, and 20mg does not typically fall into that category. While I endured a slimy mouth sack for a noticeable mood boost, she just swallowed all that crap and ended up leaving earth for a whole minute.

That mind-bending onset fizzled away in moments but the shock of it remained. For the rest of my stay in Los Angeles, whenever my sister displayed any confusion or delayed response I would say, “Oh, she teabaggin’ right now, don't bother her.” It was my favorite joke for at least three days.

Maybe it’s the differences in our sizes, or maybe it’s the strangely ineffective presentation of this product, but likely it’s a combo of both that led to our vastly dissimilar experiences. Perhaps you are a person who romanticizes dip, maybe had a favorite uncle who swore by snus, and maybe this method of ingestion does not skeeve you out. In that case, pay attention to dosing and for god's sake, leave it the bag.

This was
The most pleasant experience while leaving 40 years of Skoal Dipping.
Softening my 20 year old hand tremor from a car accident concussion.
Life is good but Cannadips THC is hard to find