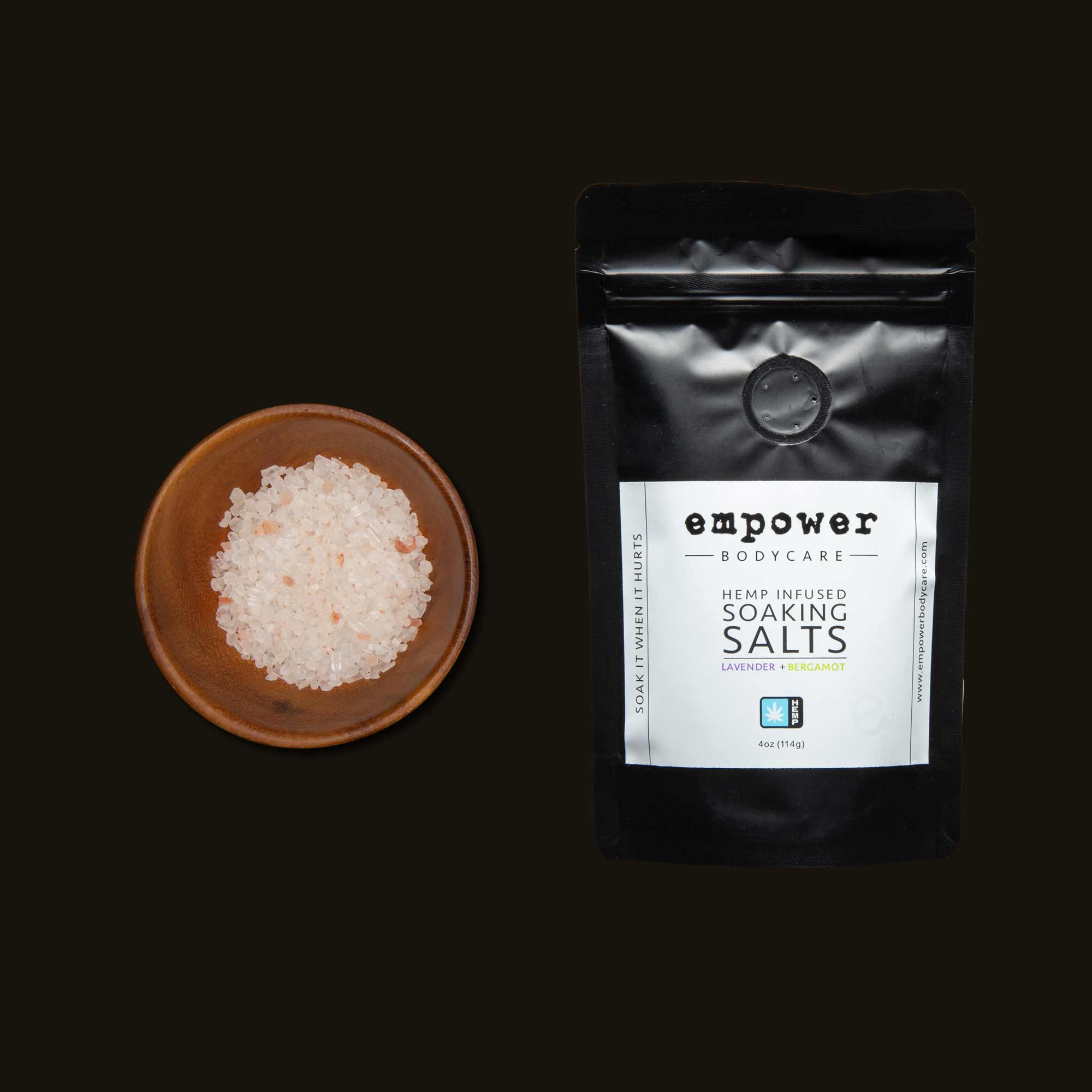 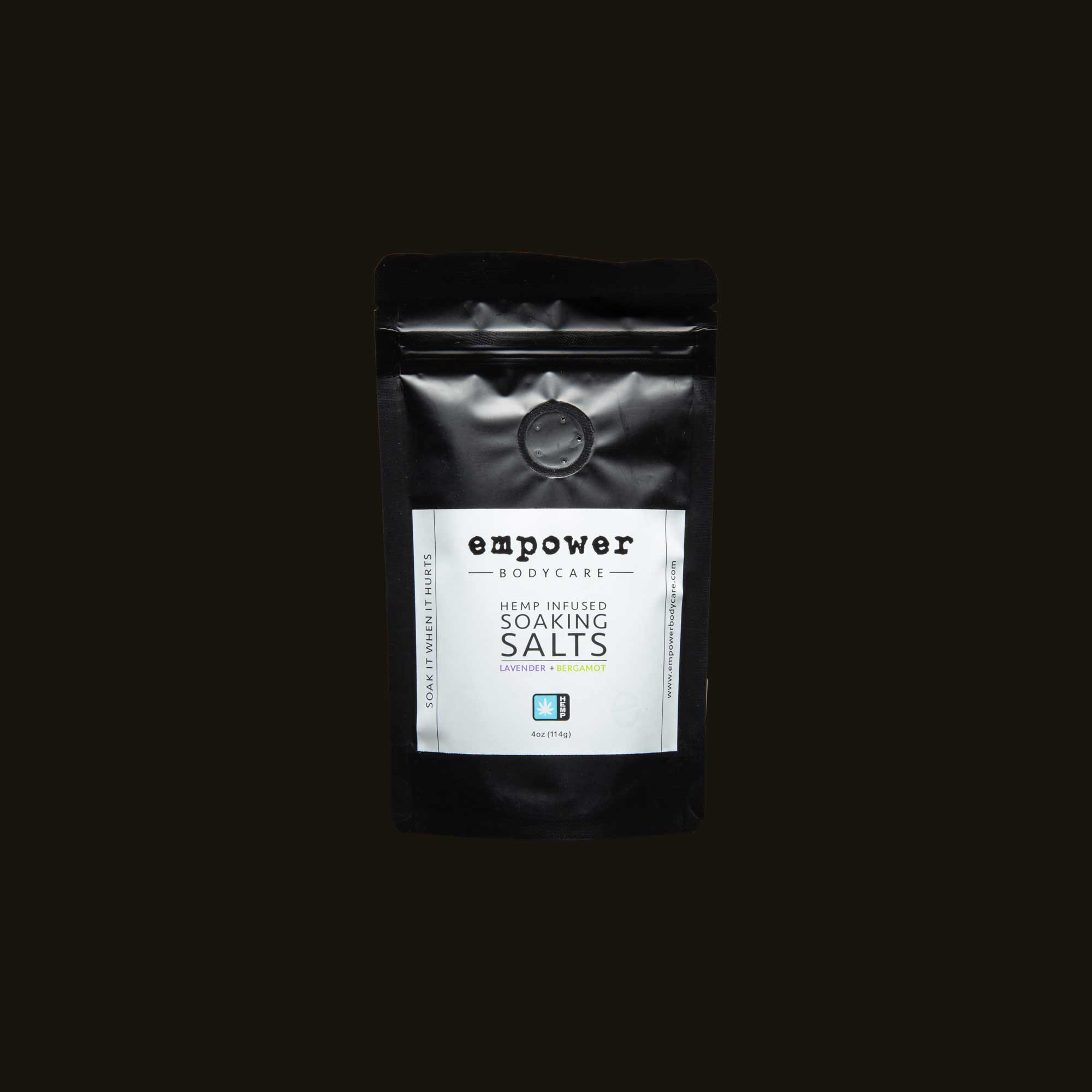 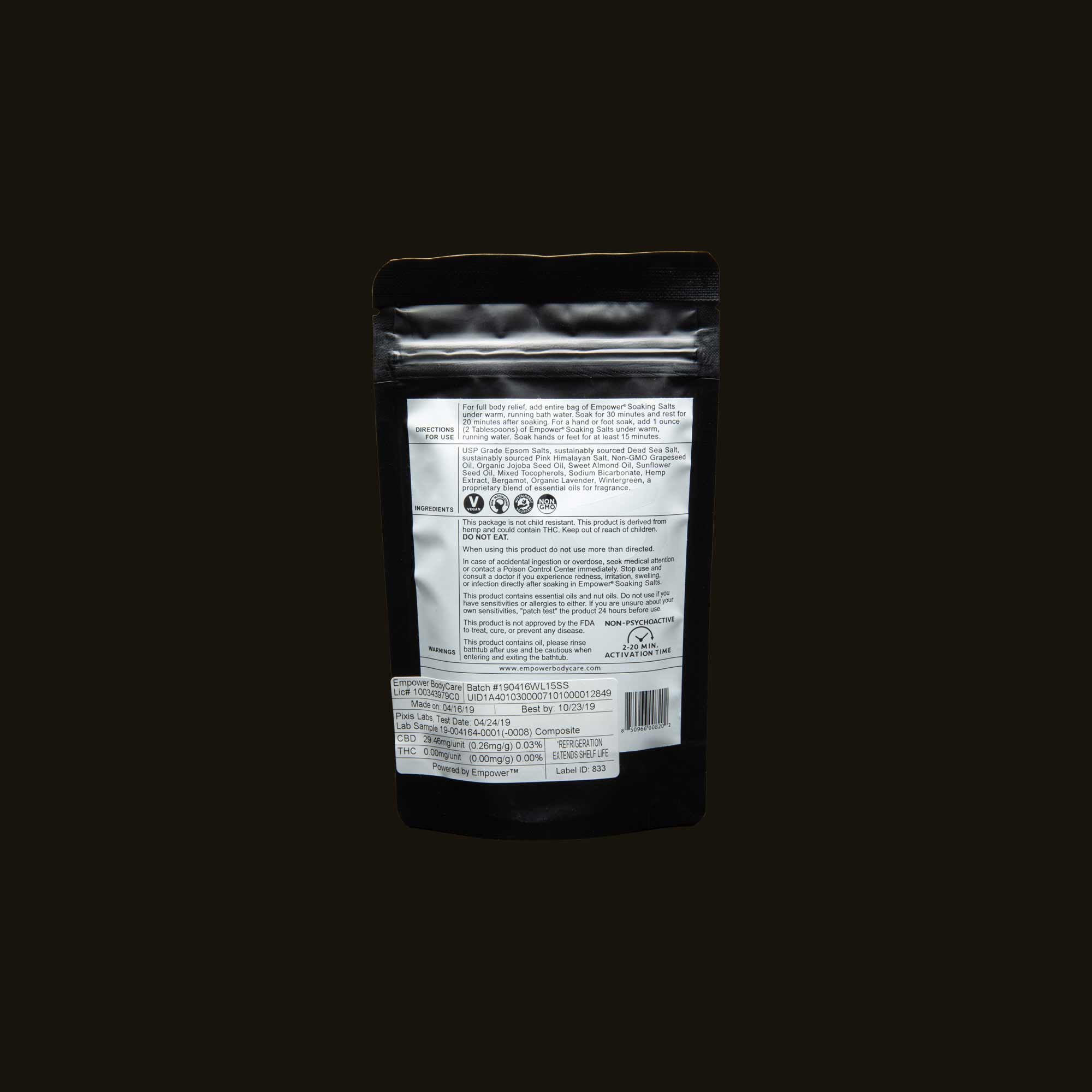 As our committee rates Soaking Salt, we capture their experience in real time through our ratings app and report everything back here.

Which Of These Empower Topicals Crushed Aches And Pains?

I was hoping this triple review would help me find something to relieve the lingering pains left by multiple moped accidents.

IN REVIEW: In this triple review of Empower's Topical Relief Lotion, Oil, and Soaking Salts, reviewer Brianna Wheeler breaks down why the oil is great for quick pain relief, the lotion is subtle yet still effective, and the soaking salts can facilitate a good night's sleep. What these products lack in glittery luxury, they more than make up in pragmatic relief.

For most of my 20s, a green-gold, 1978 Puch Maxi moped was my primary transportation. My glittery helmet and bright gold leather jacket/glove/boot combo should have made me the most visible rider on the streets, but despite looking like a fabulous stack of doubloons on wheels, some spaced-out jabronie still hit me with their car. That was more than 10 years ago, but ever since, I have been tasked with the kind of bodily maintenance reserved for folks whose traumatic injuries have evolved into chronic pain.

I’m proactive; I see a chiro when my budget allows, I do yoga daily, I sold the moped (eventually), and when the pain screams, I just blow weed smoke at it. No big deal. However, at the change of seasons, when descending temperatures set my hips and knees to hollering as if I might shatter in a brisk wind, I will slather myself up with anything in the pursuit of pain relief. And the leaves are falling and snow is on the horizon, so my review of Empower’s lineup of cannabis-infused topicals couldn’t have come at a better time.

I have my reservations about topical oils (mostly having to do with oil spots on my clothing) but Empower’s gliding body oil stick quickly quelled them. The oil is surprisingly light and shockingly non-greasy. The rollerball makes application smooth and easy, dispersing the oil evenly and leaving no thick oily drips to escape the targeted area.

“The headache never developed into a debilitating migraine. It instead sputtered and stalled out as I fell asleep.”

When I first set about reviewing this oil, I applied it to my right hip during a day of deadlines—AKA a day that would require long bouts of sitting and therefore massacre my hips. At the first ping of discomfort, I pantsed myself and began rolling the oil across my outer hip, over my buttcheek, and into the top of my hip joint. I then sat back down at my desk. The next time I stood up, approximately an hour or so later, my hip was pain-free. In fact, I was so comfortable that I’d forgotten I’d even medicated my hip. The chronic pain had evaporated and the process was so unobtrusive that minutes after application I’d totally forgotten that the whole right side of my ass was absorbing cannabis oil.

A few days later, my partner was grumbling about a sore neck as a result of over-extending during a workout. I slicked his neck, the base of his skull and his traps with the body oil stick and inside of an hour, his pain had noticeably decreased. A few days after that, my monthly premenstrual migraine began to percolate and instead of heading for the Motrin, I worked the body oil stick around my neck, the base of my skull, and around my orbital bones where my hormone headaches always seem to hurt the most. The headache never developed into a debilitating migraine. It instead sputtered and stalled out as I fell asleep.

My first moped accident was not my only moped accident. A few years after an ambulance carted me from a repentant motorist, a brake line failure seized my moped’s tires and threw me over my handlebars, tangling and dragging my knees on the frozen pre-dawn asphalt. That fluke left my knees with a dull ache that I’ve sadly just kind of learned to live with. Debilitating pain is managed mostly through weight control, as even the most incremental weight gain can affect the functionality of my weakened knees. So, as contradictory as it sounds, my gym game stays firey as hell.

“I couldn’t pinpoint precisely when the knee pain was extinguished because the effects developed in such a smooth manner.”

It’s a conundrum, and as such there have been more than a few cardio days that my knees disputed. After one such step workout, my right knee was especially upset. The manageable ache had developed into a sharp tension, like the feeling of a rubber band about to break. I pumped a half-dollar sized dollop of Empower Lotion into my palm, spread it across my kneecap, and massaged it into my hamstrings and ligaments.

I settled into my desk chair, stacked pillows on an ottoman beneath my anguished knee, and started returning emails. As I navigated my inbox, ten minutes became twenty minutes and thirty minutes suddenly became an hour. Inside of that hour, I had unconsciously ditched the ottoman pillow pile, bounced out of my chair a handful of times to refill my tea or tend to a quick house chore, and even took time to pace through the house while I mulled over a few new ideas. I couldn’t pinpoint precisely when the knee pain was extinguished because the effects developed in such a smooth manner. While I was distracted, Empower Lotion had eased a pain that had threatened to keep me off my feet for at least a day.

Mom-life does not leave a whole heck of a lot of room for luxurious bathtimes, so when the planets align and I get to have a proper soak, I want to make that moment as opulent as possible. I want bath bombs that turn my bathwater in a rainbow glitter galaxy, I want cavernous foam, and I want to end up more perfumed than a French aristocrat. Empower’s Soaking Salts do none of these things, but sometimes a healing bath is just a healing bath and that’s okay.

“Soothing my decades-old moped aches and pains felt like a bonus.”

I filled the tub with piping hot water, poured in the bath salts, and waited while the perfume developed, filling my small bathroom with fragrant steam. Lavender is the predominant aroma, bolstered by citrusy notes of bergamot. The smell was ushering me toward total relaxation before I’d dipped a toe in the water.

On this day, before I battled a difficult child over bathtime routines, I crisscrossed the city running errands, juggled a houseful of chores, attended a two-hour piano class, hit the gym, rushed home to cook dinner, and squeezed in whatever work I could in the fleeting moments in between. It was a totally normal day, but I admit, I was fucking tired by the end and hella sore. I sank beneath the surface of the bathwater feeling a lot like a brittle, old, empty balloon, which was somehow fitting since this was the most boring bathwater I’d ever been submerged in. It may not have been the 45 minutes of candy-colored Instagram fantasy I’ve grown accustomed to but I was asleep 10 minutes after I toweled off, and the sleep was uncommonly restorative. My mostly unyielding chronic aches were quieted, but, for me, the value was found in the restorative sleep and the end-of-day relaxation. Soothing my decades-old moped aches and pains felt like a bonus.

All in all, after reviewing all of these hemp-filled, cannabis-infused topicals by Empower, I would say get the whole lot. Particularly if you’re a busy human living in this unrelentingly modern world, there’s no limit to the benefit you could get from any or all of the three.

Be the first to review Soaking Salt from Empower and help others find their high.