This pain-relieving salve was formulated to calm itchy, irritated skin and alleviate aching muscles and joints. By pairing anti-inflammatory cannabis extracts with traditional soothing herbal remedies like chamomile, comfrey, calendula and lavender, this body oil can be used for everything from post-workout stiffness and arthritis pain to dry skin, bug bites and eczema. 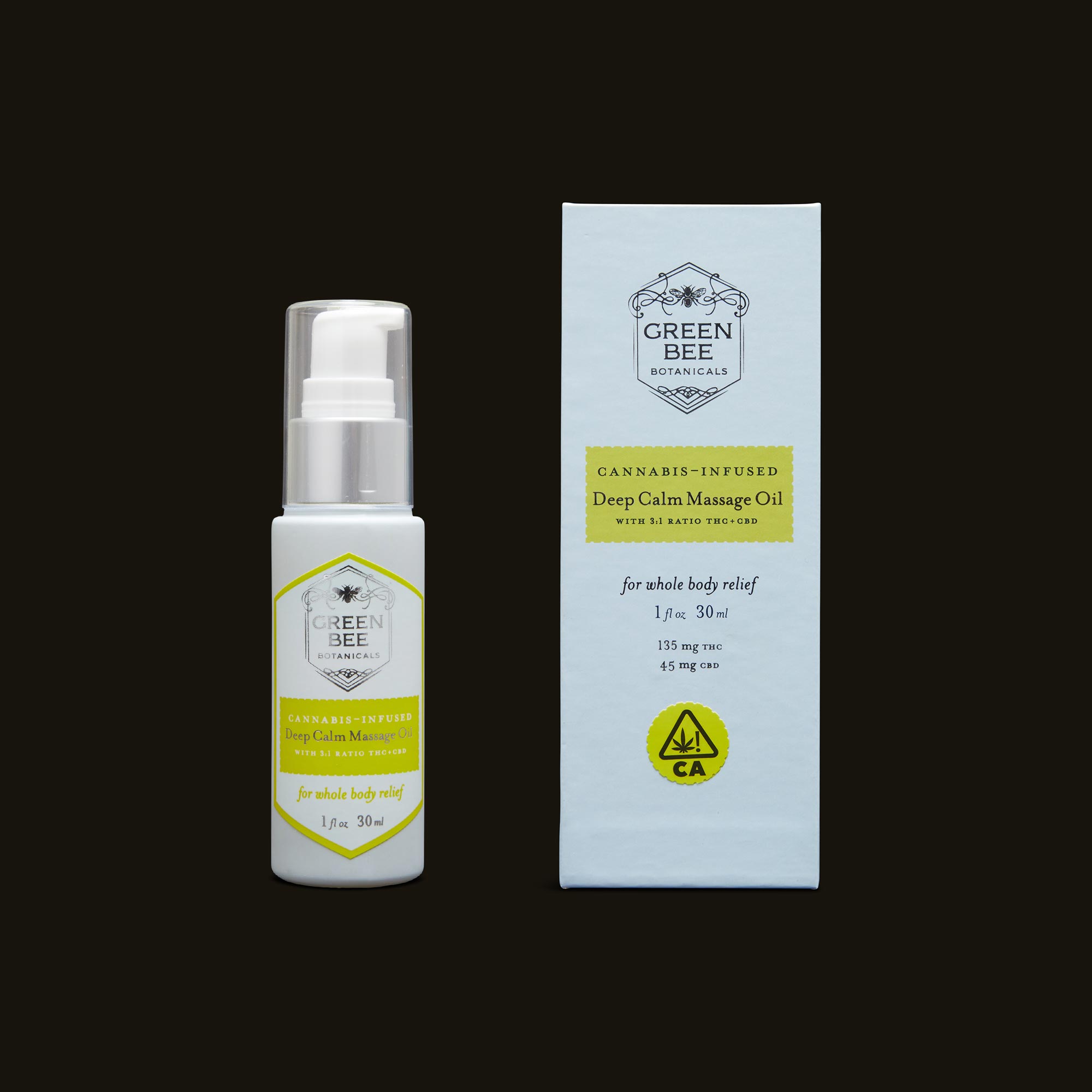 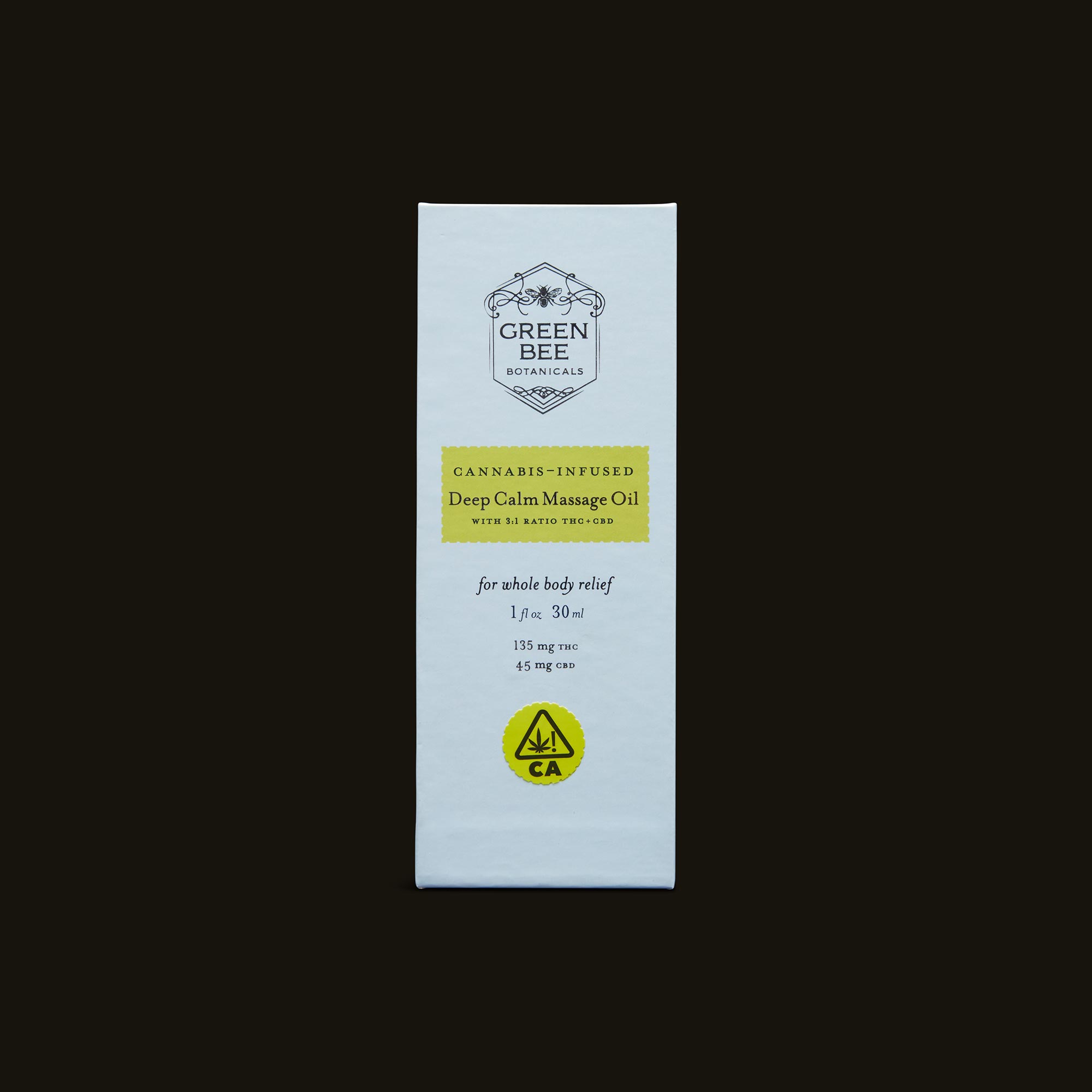 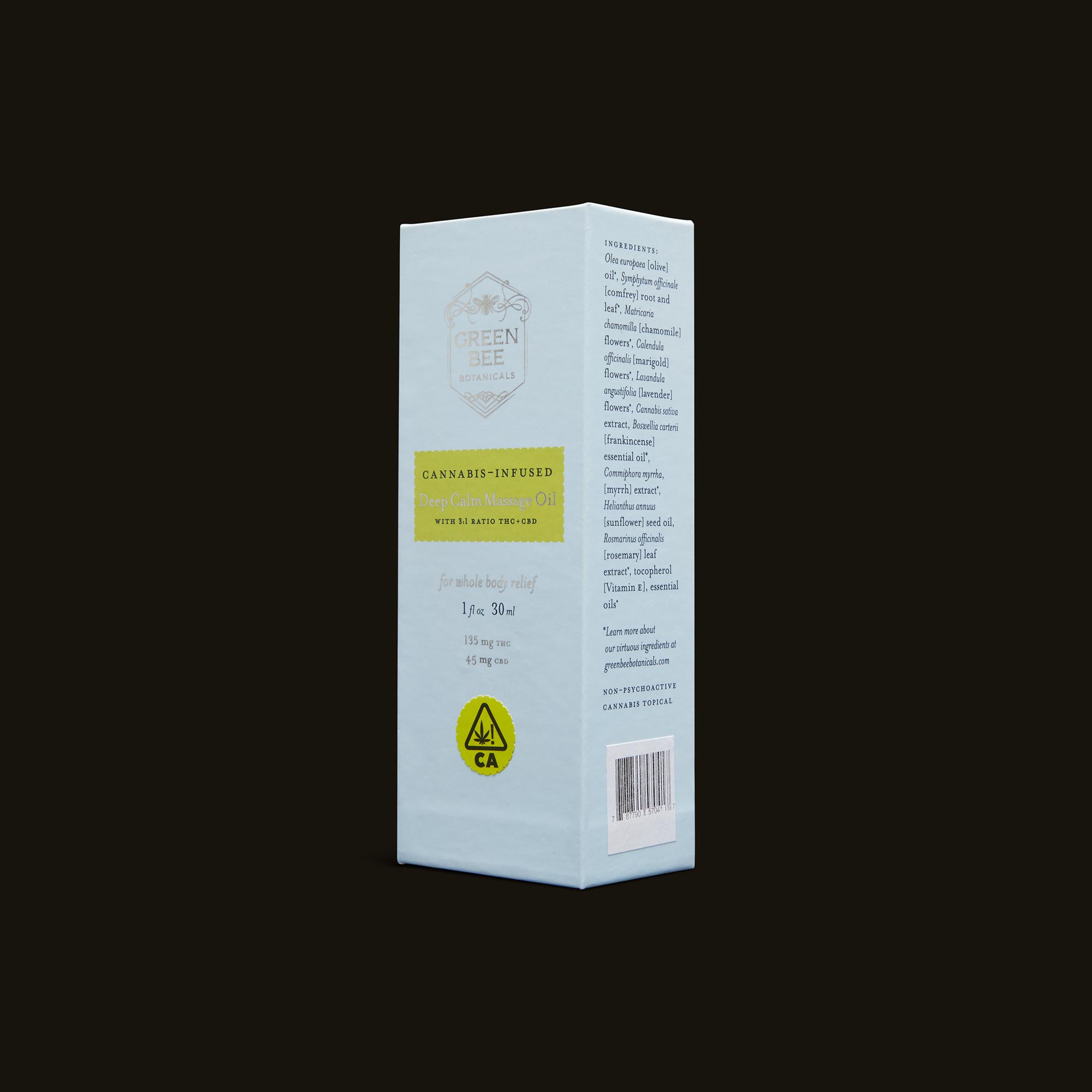 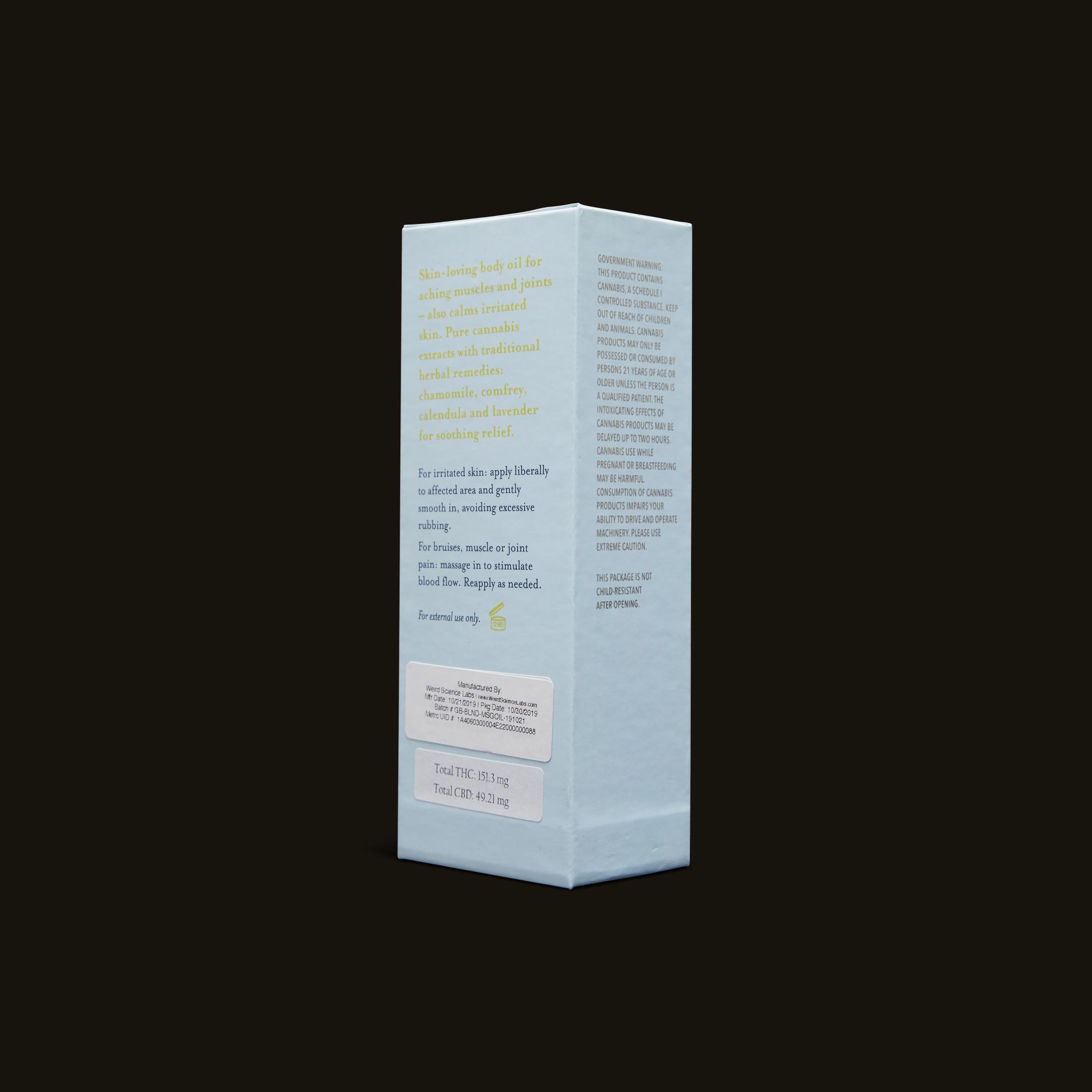 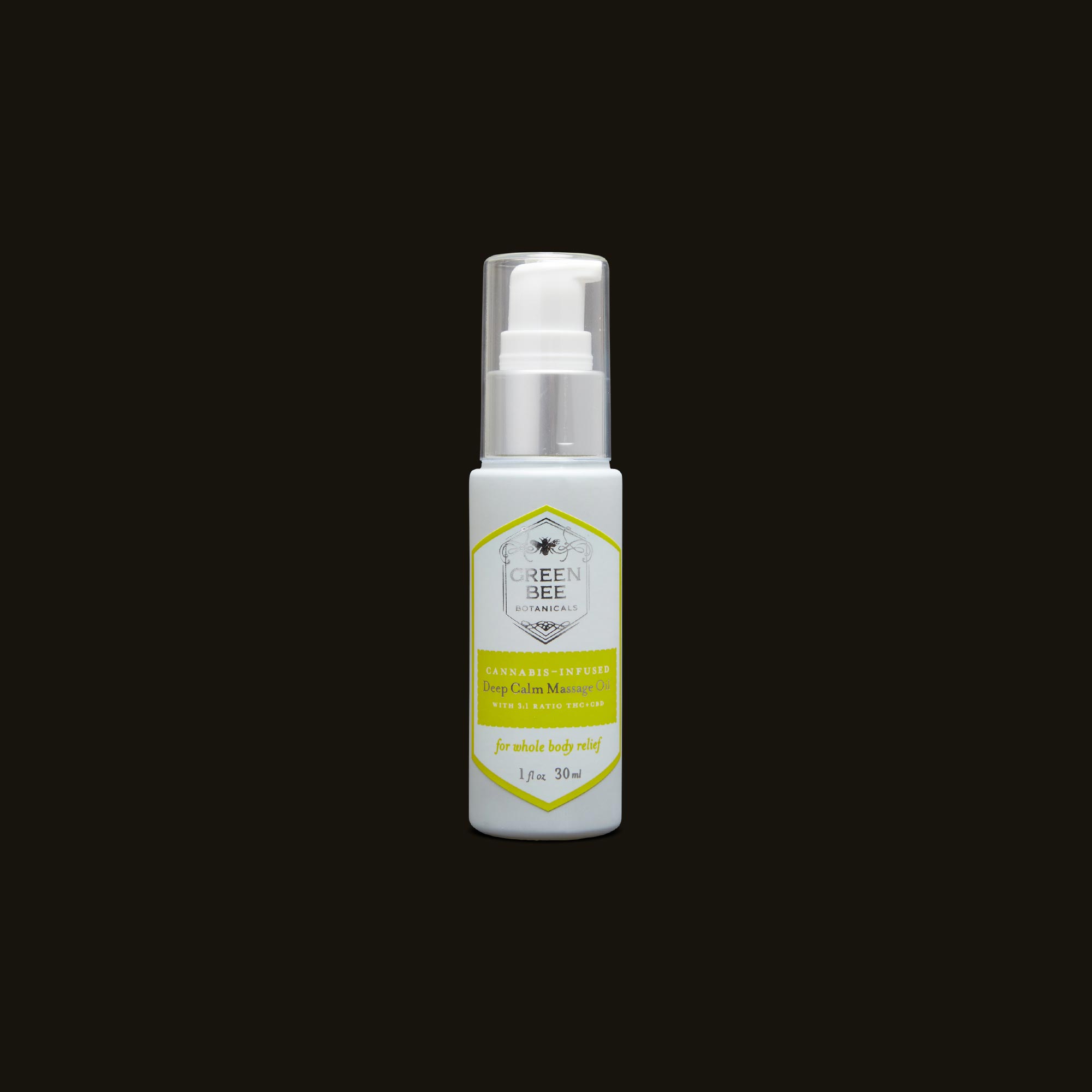 As our committee rates Deep Calm Massage and Body Oil, we capture their experience in real time through our ratings app and report everything back here.

For aches, pains and bruises: Massage in vigorously to stimulate blood flow. Reapply as needed.

Whether you’re sore, stressed or want to spice up your sex life, Green Bee has what you need.

IN REVIEW: Green Bee Botanicals’ Deep Calm Massage and Body Oil makes many of life’s annoyances a bit easier to handle. From post-workout stiffness and arthritis pain to dry skin, bug bites, and eczema, this body oil will have you feeling better in no time. Not only is it effective, it offers a mess-free experience without any greasy residue. By combining cannabinoids with chamomile, comfrey, calendula, and lavender, they’ve created a natural, time-honored concoction you can really count on.

It’s a touchy subject, but we all need a little human touch. As a person whose primary love language is touch, quarantine has been like a special level of loveless hell. But it made me think about finding new ways to, well, touch myself. Honestly, how often do any of us touch ourselves in pleasurable, non-sexual ways? Why do I treat my own body like some lecherous perv who only grabs at my private places? As RuPaul says, “If you can’t love yourself, how in the hell are you gonna love somebody else?” So I decided to throw myself a little caress fest with some Cannabis-Infused Deep Calm Massage Oil from Green Bee Botanicals.

The classy, light blue box boasts a 3:1 ratio of THC:CBD on the front. It promises a potent punch of 151.3 mg of THC and 49.21mg CBD in each bottle, but if you’re worried about overdoing it, don’t, because it also says that it's a “non-psychoactive cannabis topical.” So feel free to grease yourself up like Arnold Shwartzenegger in a Mr. Universe pageant. (Are they called pageants? Competitions? You know, at the thing.) After all, as the box says, it’s for “whole body relief.”

“There are no sulfates, petroleum, or crazy mystery ingredients with names that sound like Star Wars characters. ”

The main ingredient is olive oil, which is a wonderfully gentle moisturizer for parched skin. Aside from cannabis, the ingredients list has a bevy of other beautifully medicinal herbs like lavender, chamomile, comfrey, frankincense, myrrh, and rosemary. There’s also added Vitamin E, which (according to my mother) is supposed to be good for reducing scars. And that’s it. There are no sulfates, petroleum, or crazy mystery ingredients with names that sound like Star Wars characters. The blend is a purely plant-based and natural moisturizer that should be copasetic with almost any skin type.

In fact, the box even suggests using it to soothe irritated skin, though it does caution to avoid excess rubbing, which (while a healthy precaution) is a pretty comical warning to see on a box of massage oil.

There are also directions for using it on bruises, muscle or joint pain. Handily enough, as a chronically clumsy person with sensitive skin, I happened to have a big purple bruise right on my forearm. I gently (but not excessively) rubbed some oil on. I didn’t feel any immediate effects, but after a minute or so I thought I could feel a very subtle numbing of the pain. It could’ve been that I’d just gotten accustomed to the sensation, or maybe it’d stimulated my blood flow as the box suggested, but either way, I did feel better. After a couple of days, the bruise had faded nicely, and I want to say faster than usual, although I didn’t take any sort of scientific (or other) measurements to back that up.

I gave myself a bit of a rubdown on my arms, but it was hard to relax and settle into the specific sensations I was getting from the oil while also rubbing. While it was enjoyable to use as a natural moisturizer and bruise remedy, I realized that in order to get the full experience of this product, I was going to have to do something I hadn’t done in more months than I could count. Something that in our crazy covid world seemed so outrageous and so scandalous that I was getting anxious and excited just thinking about it: I was going to have to touch another human being.

I’m very lucky to have a couple of covid-bubble friends that would let me touch them. The smell was herbaceous and fragrant, dominated by the floral, almost piney, notes of rosemary. My friend said as he poured it into his hands, “I feel like I could cook a steak in this.” Then he lathered me up like a big ole ribeye. I couldn’t tell if it was from the THC, but I was suddenly extremely relaxed and melting into a much more jelly-like state of being. I didn’t need to wipe any excess oil off afterward, it was all absorbed into my skin during the rubdown. I felt soothed and moisturized, with no sticky or greasy residue like some cheap oils can leave behind.

“I felt soothed and moisturized, with no sticky or greasy residue.”

We talked about how much humans all need touch—because at the end of the day we are really pack animals. We thrive in groups or tribes, it’s what’s made us such a successful species. It’s how we built the pyramids, societies, and pretty much well, everything. While America still focuses on individualism, if quarantine has shown us anything, it's that people have a really hard time not being around other people. And sometimes, you really just need someone else to rub your back.

Touching, such a hugging or massage, makes your brain release oxytocin, the "bonding hormone." It also stimulates the release of other fun, feel-good hormones, like dopamine and serotonin, and after a year-long quarantine, we’re all starving for some of that good stuff. So treat yourself, and make that first “touchstravaganza” after your vaccine even more special by adding some Cannabis-Infused Deep Calm Massage Oil from Green Bee Botanicals

I love the herbal scent of all the healing plants in this formula. It immediately gave me relief from my itchy rash on my arm.