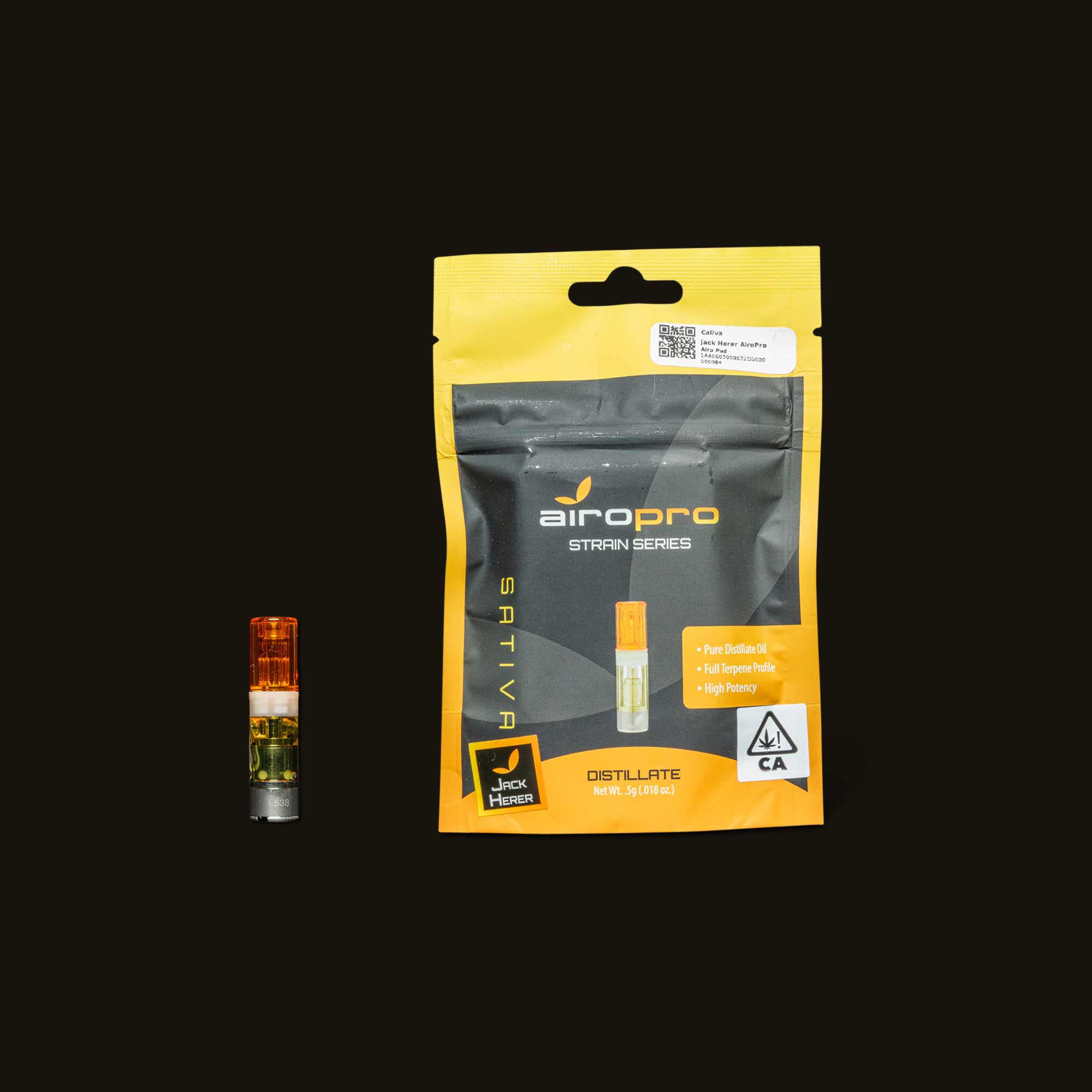 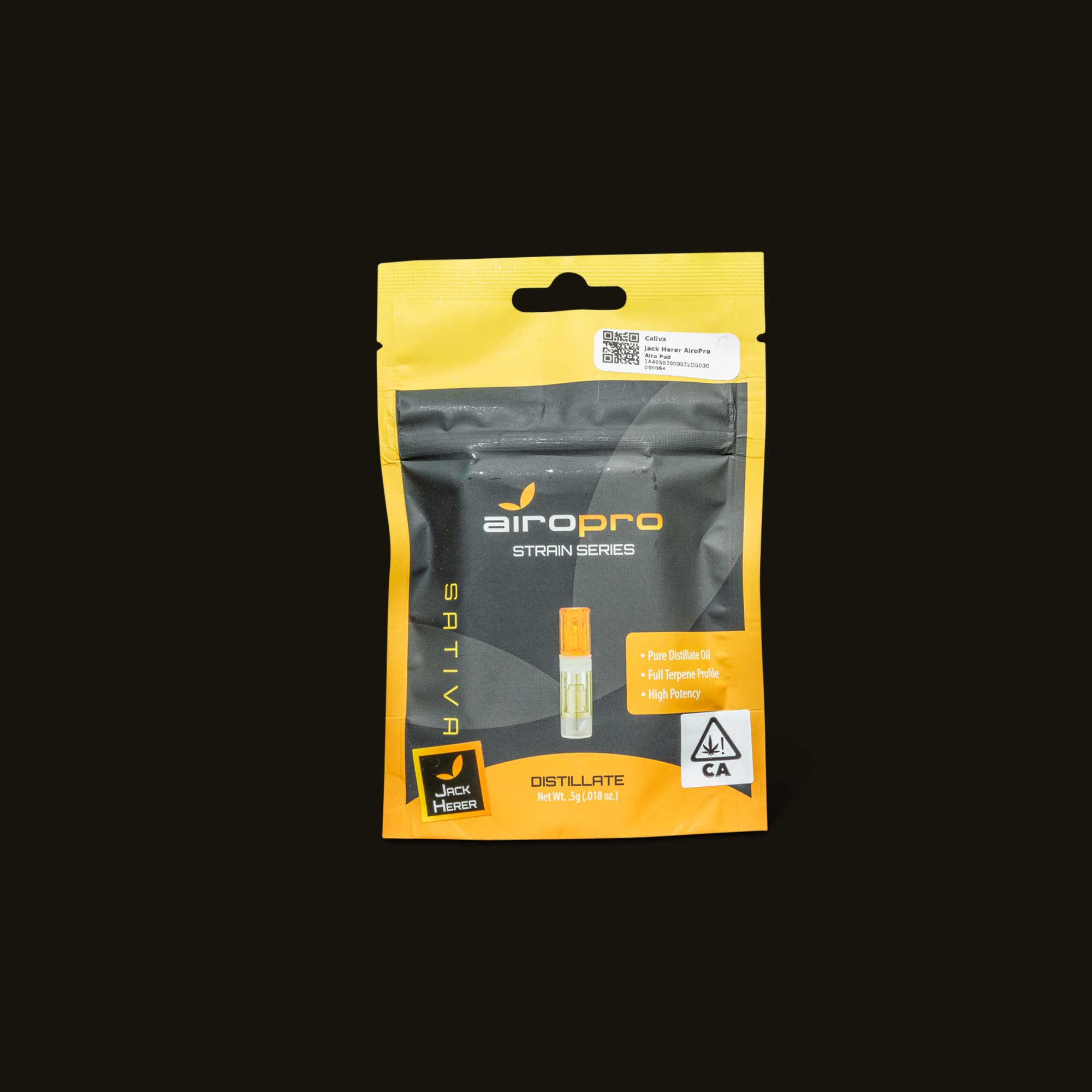 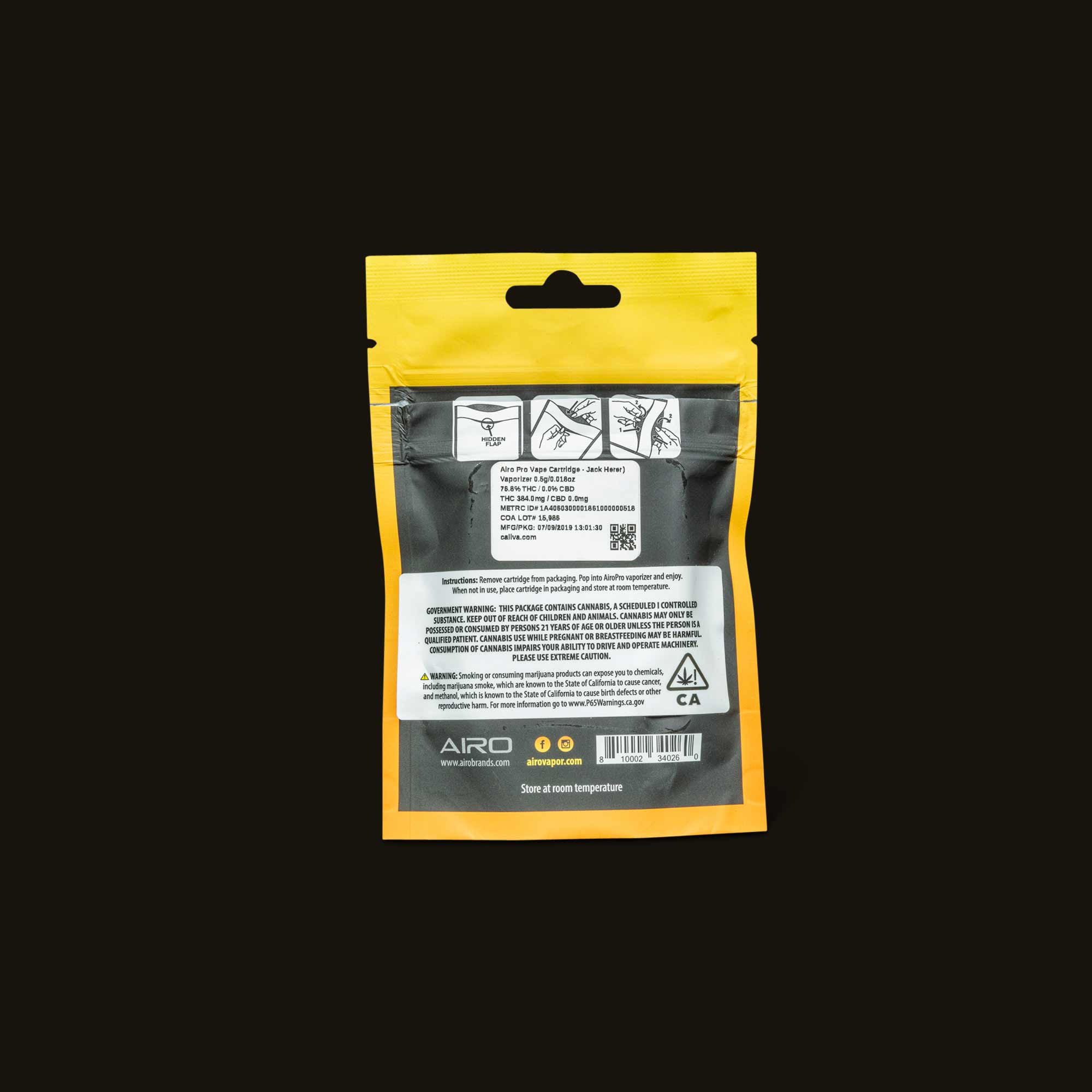 As our committee rates Jack Herer AiroPro, we capture their experience in real time through our ratings app and report everything back here.

All Systems Go With AiroPro

IN REVIEW: This is a proprietary vape cart that’s compatible with Caliva’s AiroPro battery. The sativa distillate is a part of their Strain Series, and packs 76.8% THC into a .5g cartridge. Expect a full terpene profile with a taste of pine and herbs to provide energy and euphoria perfect for anything from getting outdoors and exploring the wilderness, to staying in and working on the project you’ve been putting off.

Like all AiroPro carts, this Jack Herer oil from it’s Strain Series delivers big, smooth hitting clouds that instantly put me in the holiday mood and left no room for the Grinch to take hold. I sampled this on Christmas Day because I thought, “Heck, what better distillate to sample on this holiday than that of the venerable Jack Herer?” Caliva pays careful attention to extracting the true essence of this popular strain into its proprietary AiroPro system.

“Lots of unbounded joy with this vape. ”

I started vaping this shortly after opening presents with the wife, and I pretty much kept at it all day. It provided the right mood for a day of unwrapping gifts, assembling them, and of course eating everything in sight and being grateful in general. This was a festive day, so what I was really looking for was an experience that helped me let loose and have fun. My mission was accomplished on that front. After only a few pulls, I went ahead and queued up the ol’ Apple music Christmas hits list and proceeded to play fetch with the dog’s newest chew toys. Lots of unbounded joy with this vape.

The notes of pine are a treat to taste, and they complimented a midday walk around the neighborhood nicely. My senses were heightened with every step, and I reveled in the smells of real wood burning from distant chimney stacks and the aroma of freshly baked desserts wafting through the air. At one point, I hoped for an old British man with thick mutton chops to stick his head out from a second floor window and beckon down to me to go purchase him the fattest goose in London. I would have done it too because this Jack Herer vape cart put me in that good a mood.

On my way back home, I passed a deflated snowman decoration that had no doubt been taken out of service by local hoodlums. Teetering only a few steps away was another lawn decoration that appeared to be Darth Vader holding a Candy Cane. I cursed the Scrooges who could do such a thing, and then remembered how I used to resort to such mischief as a youngster. I took in a long pull of the Jack Herer while I scanned over the carnage, and didn’t even realize the homeowner crouching in a garden bed nearby. She looked at me as if I were some half-stoned private eye that was gonna help her catch the people who did this, but I just sheepishly grinned and tucked away the AiroPro.

“My senses were heightened with every step, and I reveled in the smells of real wood burning from distant chimney stacks.”

Returning home, I told my wife about the Christmas Day vandalization on her favorite street, and told her that it wouldn’t be safe for her to leave the house for awhile. Being that we weren’t going out much on the count of us being in a pandemic, I found this to be a solid joke. I also told her that it was likely that I would be visited by three ghosts today. She asked me if I had vaped the entire cartridge on my walk, and I asked her if she had made the cookies yet. When I saw a giant plate of them sitting on the kitchen counter I took a helping of about 15, grabbed some milk, and parked myself in front of the TV where I watched A Christmas Story and went to town on some baked goods (and whatever I could squeeze out of that Jack Herer cart).

At some point I did actually finish the Jack Herer Strain Series cart, but by then I was as jolly as the fat man himself, and I even found the energy to put together my wife’s new shoe rack and my new weight bench. We Zoomed with family members, cooked a turkey, and even gifted some cookies to the neighbors. (I had to include a note that regretfully informed them that they were not medicated cookies. I had to include this note because my neighbors know exactly who I am.)

While I enjoyed this AiroPro strain down to its last drop, you need not wait till Christmas, Kwanzaa, or Hanukkah to partake. If it’s joy and cheer you seek without the humbug, the Jack Herer AiroPro Cart is a more than suitable choice.

Be the first to review Jack Herer AiroPro from Caliva and help others find their high.