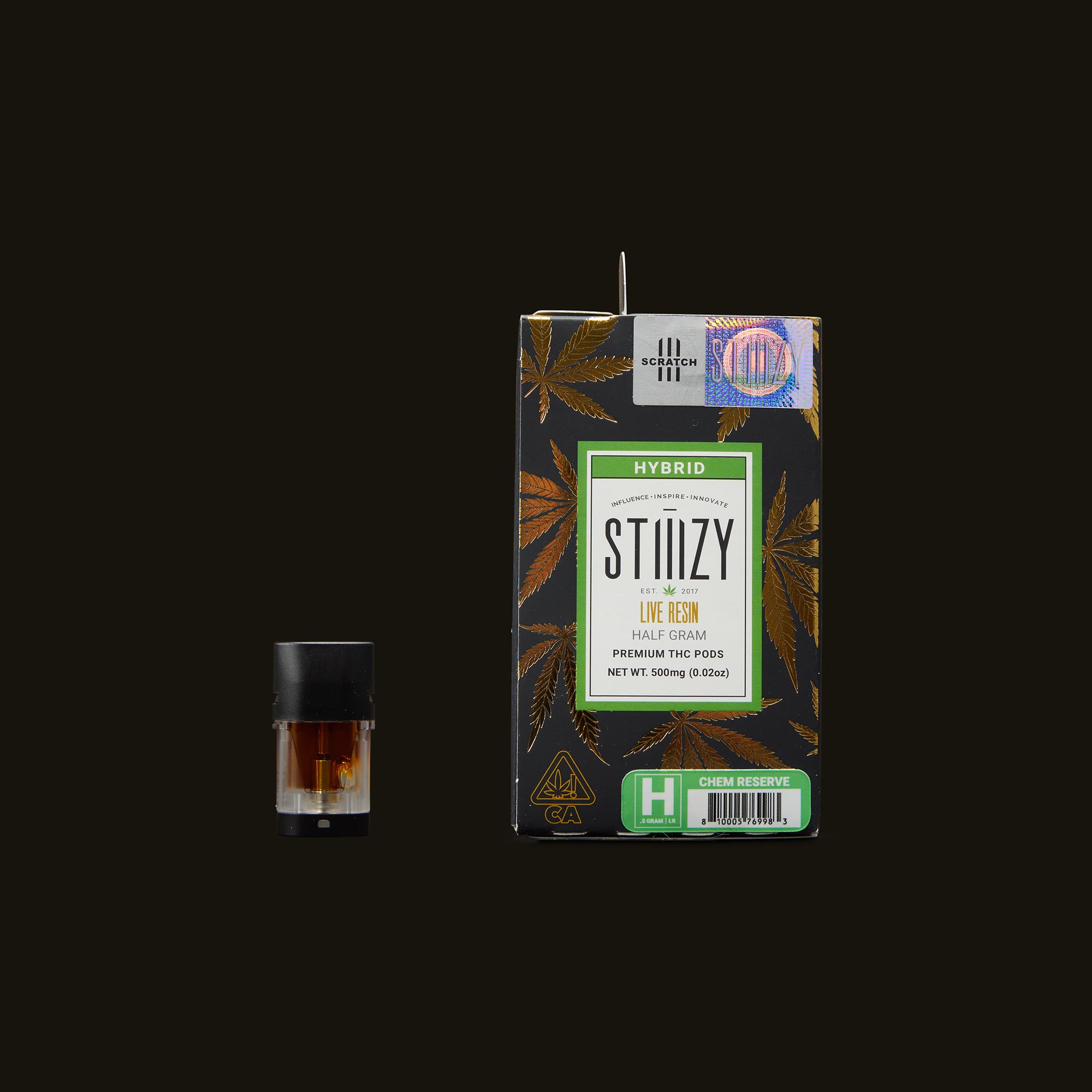 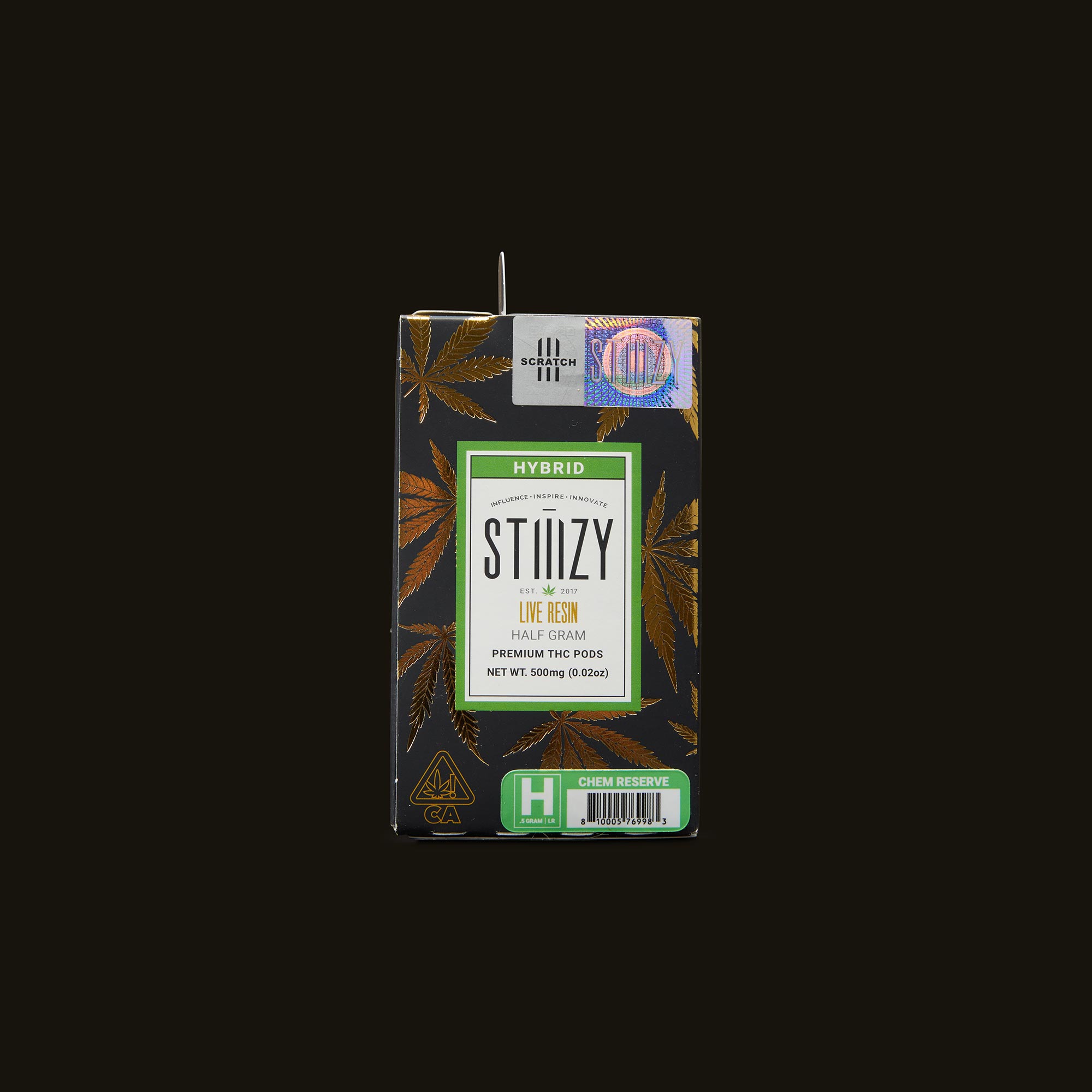 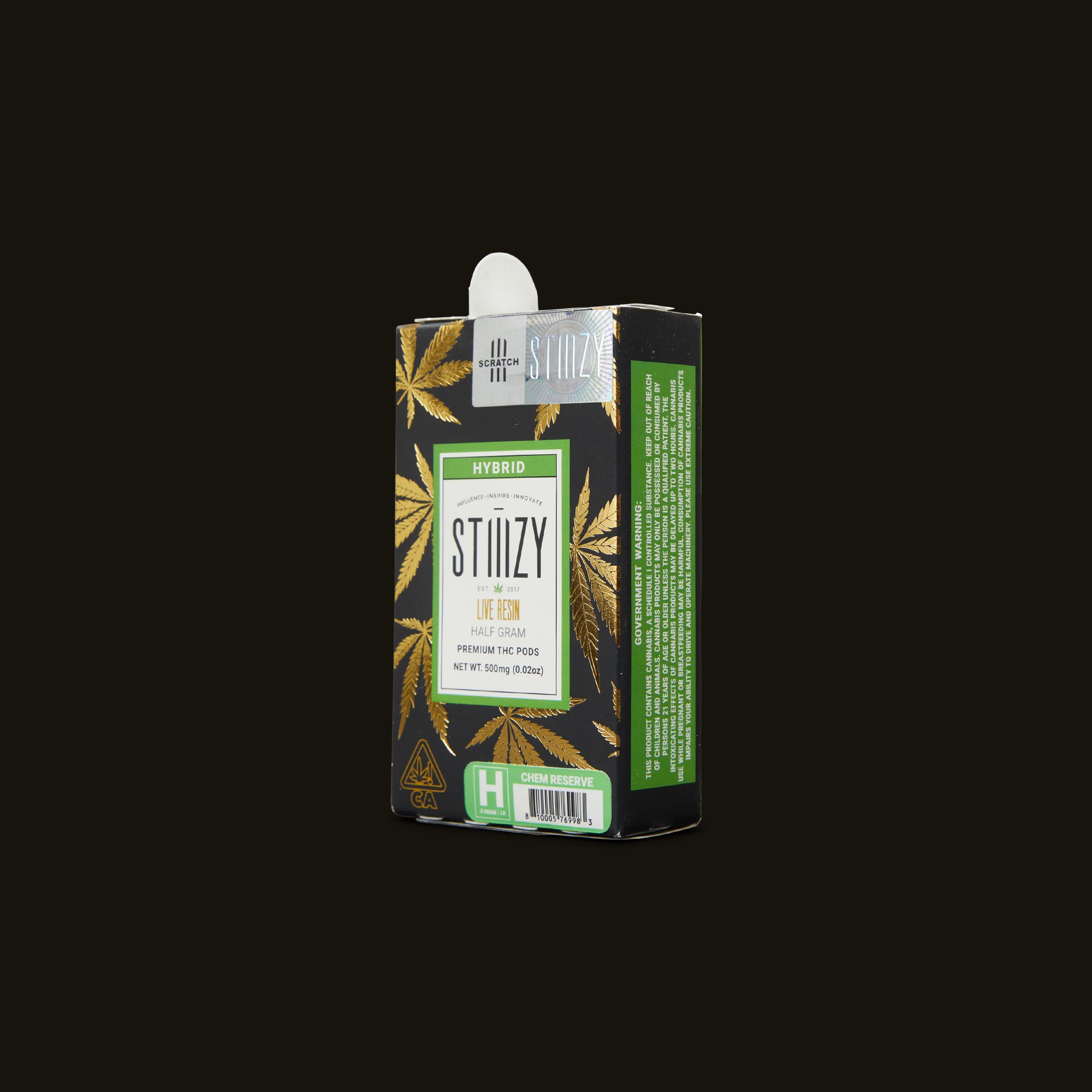 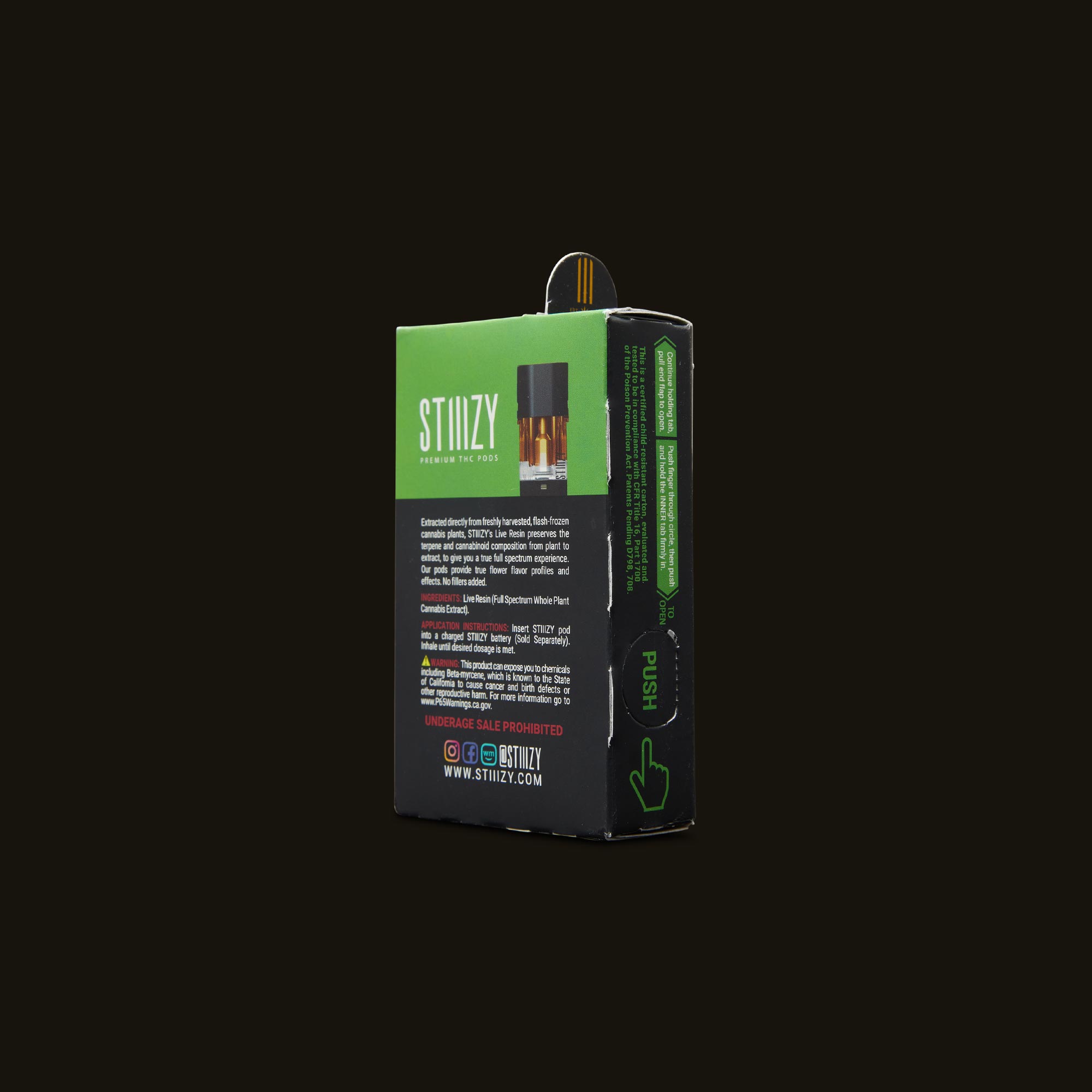 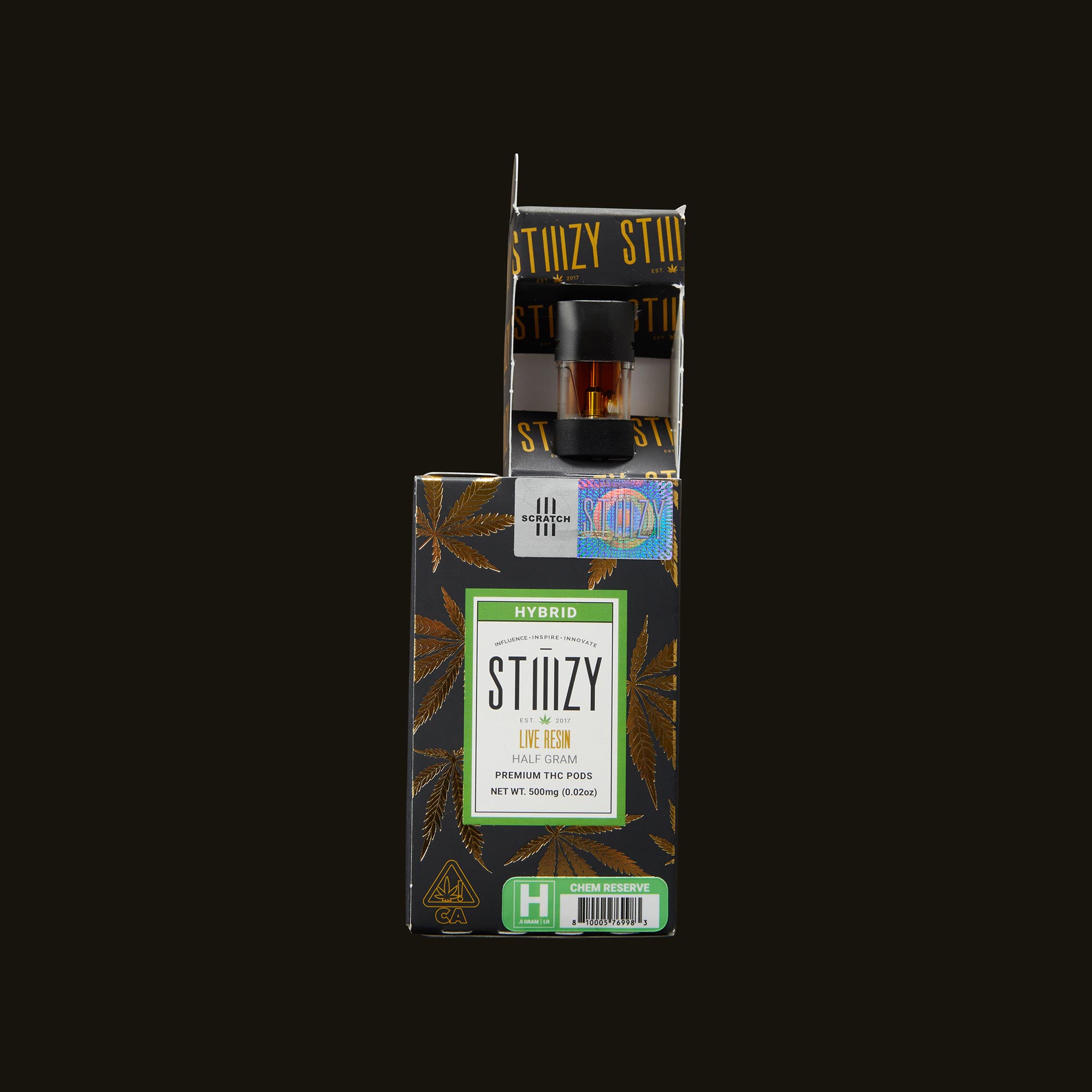 As our committee rates Gold - Chem Reserve Live Resin Pod, we capture their experience in real time through our ratings app and report everything back here.

Get Busy With Stiiizy

IN REVIEW: The Chem Reserve Live Resin Pod is part of Stiiizy’s Gold line of proprietary vapes. Each pod has 500mg of premium concentrate and is only compatible with the Stiiizy battery. This live resin packs in 74.87% THCand makes for a smooth vaping experience that’s great for mornings, movie night and everything in between. Notes of citrus and herbs are supremely tasty to the last pull, and the effects will leave you high, happy and honed in.

Meet yet another Stiiizy pod that demands regular usage. Flavorful and smooth hitting, this Chem Reserve injected a much needed dose of euphoria and energy into an otherwise monotonous morning of house chores. It should be stated that this ain’t your grandpa’s Stiiizy. This one packs a punch, and there were moments where I wasn’t quite sure if I was Swiffering my floors or practicing for the U.S. Curling team. At any rate, it made whatever I was doing a lot more fun and tolerable.

“Pretty soon I was pruning branches like a euphoric Edward StiiizyHands.”

This was a two-tiered high that started off like a bucking bronco leaving its stable, and it eventually crested towards a more subdued and reflective experience that was more worthy of an elbow-padded tweed jacket and Calabash pipe. This was a true hybrid buzz that borrowed the best from both worlds and should suit you well day or night. Though I would say the overall sensation is more indicative of a sativa.

I went on to enjoy this vape pen with a cup of coffee as I sat on my patio and looked at all the overgrown tree branches and leaves that needed cleaning. My wife told me to take care of them last month, so thanks to this Stiiizy Chem Reserve, I finally got around to doing it. I put on some DeBarge for a little theme music and grabbed some hedge clippers. Pretty soon I was pruning branches like a euphoric Edward StiiizyHands. My orange tree was also starting to produce, so I stopped intermittently to feast on those between pulls from the vape. This was turning into a one man Bacchanalia.

At 74.87% THC, this live resin is not to be trifled with. After having an internal debate on whether or not it’s a good idea to climb my tree in order to cut a pesky palm frond, I decided that I should only do so when I no longer felt like my leg bones had been dipped in toffee. I was starting to wind down to a more subdued state, but I managed to clean the front patio to my wife’s satisfaction in the meantime. For those tackling menial tasks and projects, this Chem Reserve should be able to inject a bit of joy and wonder into your work.

“For those tackling menial tasks and projects, this Chem Reserve should be able to inject a bit of joy and wonder into your work.”

After toiling in the hot December sun, I walked across the street to where the communal hot tub lies. With the Chem Reserve pod in hand, I proceeded to soak myself in solitary Stiiizyness. I pretty much checked out for a good half hour, until I saw my hand turn into a prune, and then gathered my things to return home and eat another orange. On the way there I saw a youngster attempting bike tricks in his driveway, and when he expressed frustration with a jump gone wrong I offered a few words of encouragement. As I stood there, soaking wet, palming my Stiiizy and holding a sailboat towel, I could only imagine what was going through that kid’s mind. I must have sounded like an ancient person to him. I then bowed my head and walked quickly home before the HOA special forces were dispatched.

Make no mistake about it, left to your own druthers this Chem Reserve can offer you hours of distraction, but there’s something about its upbeat quality that suggests it’s best enjoyed with friends. Listening to music or playing with your dog or cat is also heightened with this high. I even invented a game with my dog called The L.A.S.S.I, which stands for The Labrador Assisted Skeet Sprinting Initiative. It’s basically a game where he tries to catch me as I sprint in the opposite direction, and is one of those things you invent only when you’re high. If you have committed the cardinal sin of being bored, then you better L.A.S.S.I. your way over to this Stiiizy pod and reserve yourself some fun.

Be the first to review Gold - Chem Reserve Live Resin Pod from Stiiizy and help others find their high.