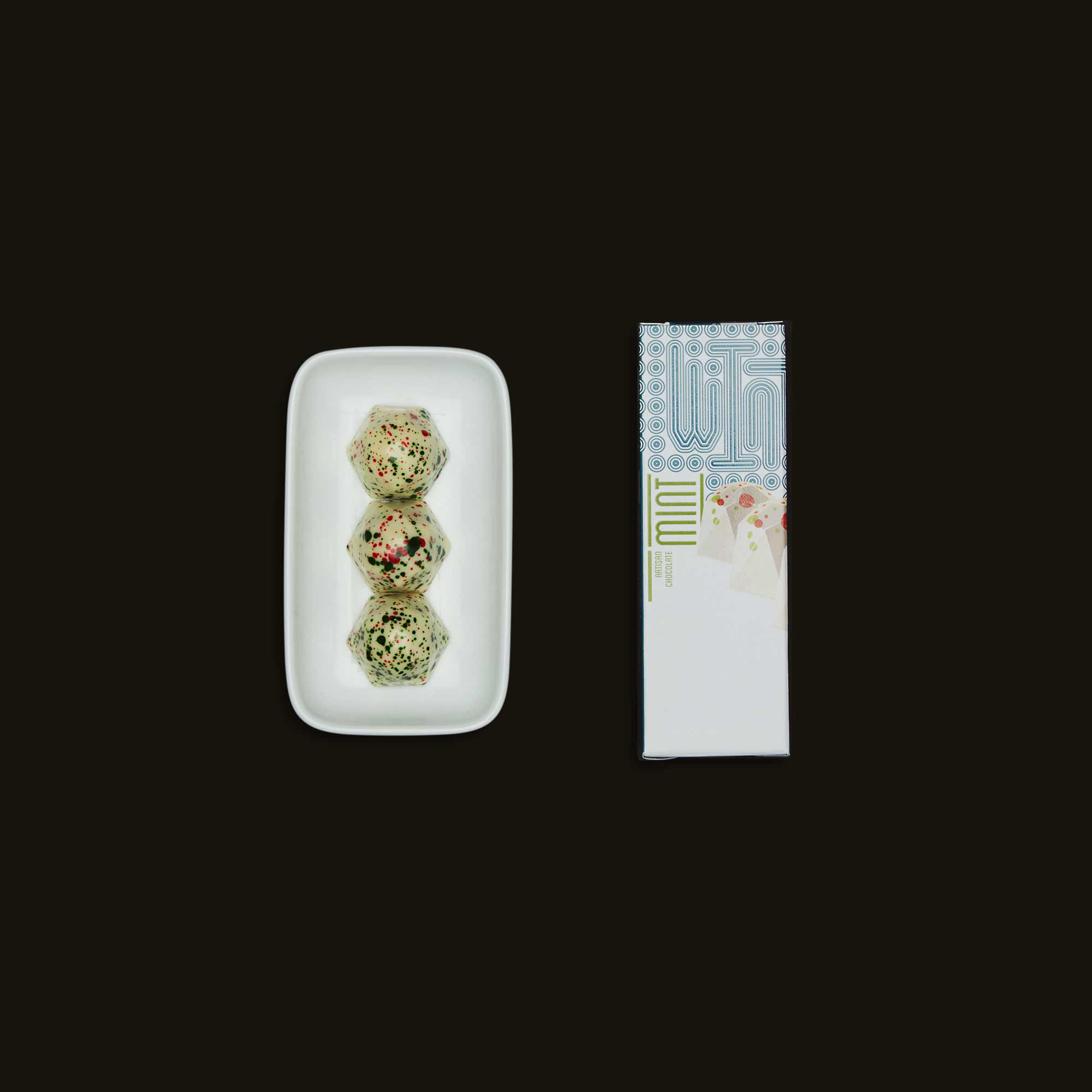 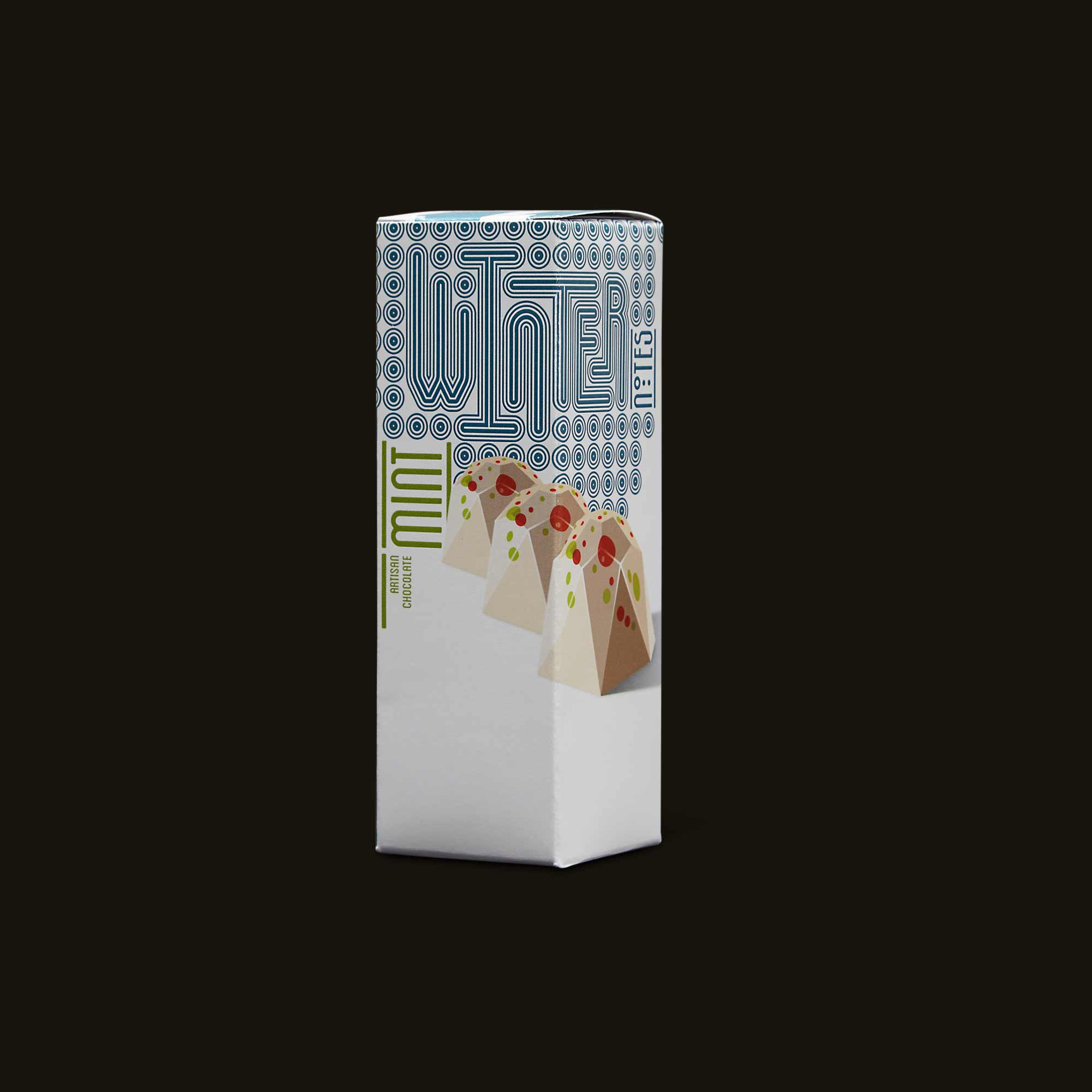 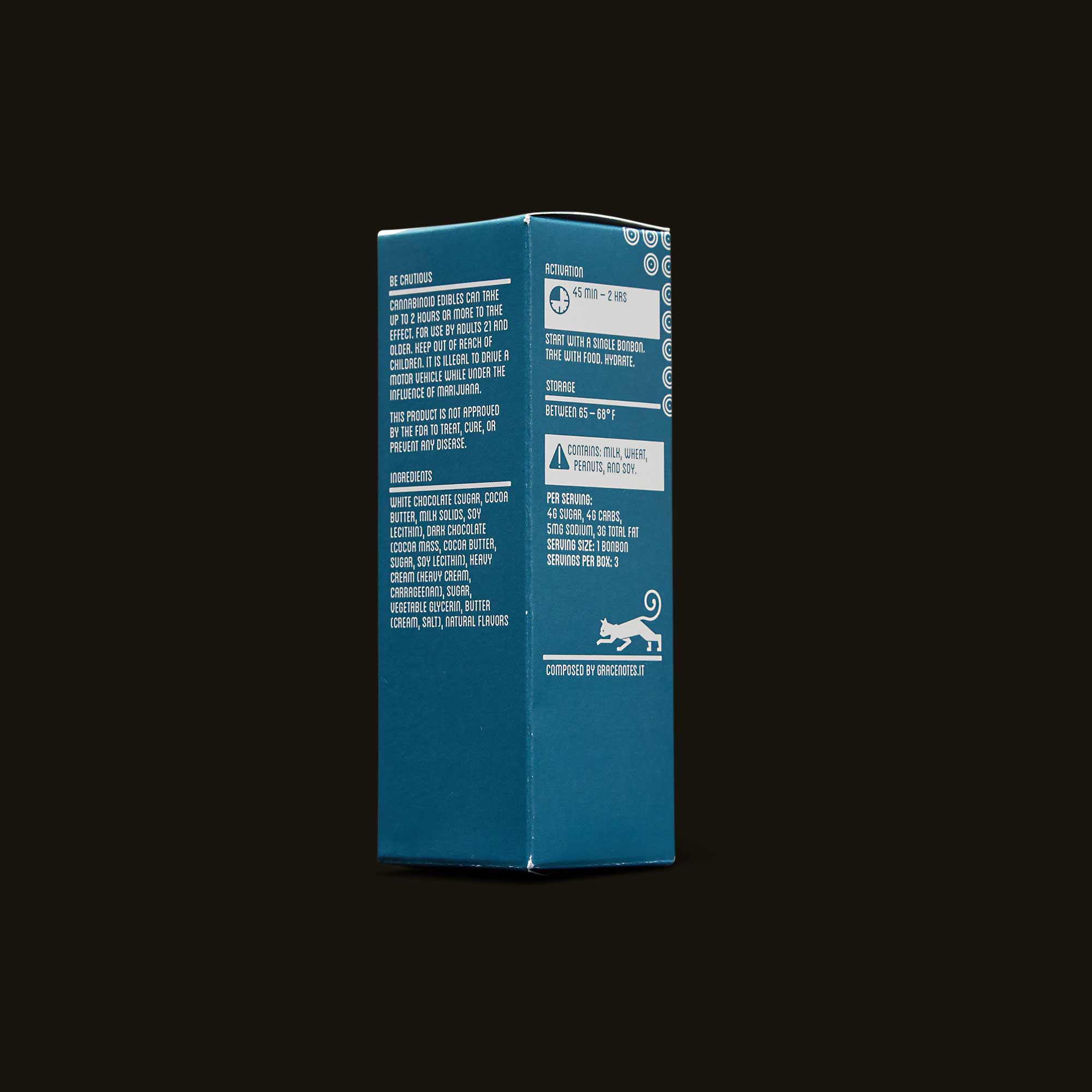 As our committee rates Winter Notes - Mint, we capture their experience in real time through our ratings app and report everything back here.

If Christmas Ornaments Got You High

Don't be alarmed—these bonbons are not as white chocolatey as you might think.

I will roll my eyes at white chocolate foolishness all year long (just read my review about Wyld’s Strawberry White Chocolate bar to see what I mean). That said, once my pink plastic Christmas tree is unearthed from its basement storage corner, I will tolerate the presence of white chocolate in the name of good cheer. I make every Christmas hater-free, so if that means I have to eat around the contents of an advent calendar, so be it. Wild as it sounds, I think Grace Notes gets where I’m coming from. Not only is their mint Winter Notes bonbon reminiscent of an opalescent Christmas tree ornament dotted with reds and greens (as if they know white chocolate is unacceptable any other time of year), the exterior is a purely decorative shroud for the dark chocolate center, the true star of this edible.

“What I tasted mainly was the fudgy center, another delightful nod to the holiday season.”

There was no outstanding mint flavor to this bonbon; it was more of an aggressive suggestion of mint, like having the flavor of mint described through an old-timey phone. What I tasted mainly was the fudgy center, another delightful nod to the holiday season. The 5mg of THC was undetectable in the flavor profile, and as a enthusiast, that tends to disappoint me. I was looking forward to the marriage of grassy herb and crisp mint (anything to conquer abominable white chocolate) but was satisfied with grandmotherly fudge as the dominant flavor.

The high came on in smooth, graceful increments, building to a bright, creative crescendo before tapering off as slowly and evenly as it arrived. On my first session with this bonbon, I headed to my local coffeehouse to catch up on some creative nonfiction pieces I’d been working on. The placidity of the high led me to believe I was spinning literary gold, but upon review, I saw that it was all false confidence encouraged by real motivation. I was clear-headed and focused, but my lyrical creativity was taking a weed nap. While the high compelled me to exercise my creativity, it became clear wordsmithing was not the right activity to pair with it.

Realizing I’d just spent an hour typing trash was a buzzkill that first soured my attitude. Then it saturated my body buzz with bone-chilling shivers and unshakable discomfort. After walking home from the coffeehouse in 59-degree weather (not that friggin’ cold, right?), it took nearly 20 minutes of hovering over a space heater to warm up. I ain’t new to Pacific Northwest weather, so all of that shivering was foolishness tantamount to a solid piece of (blurgh) white chocolate.

Just because session one ended up a wash, it didn't deter my excitement for session two. I knew this chocolate would creep into my motivation center slowly and sweetly, but that I should not mistake the clarity and focus for divine inspiration. Session two would not be colored by a waste of creative efforts. Instead, I clocked the motivational boost and channeled it directly into the busywork that supports creativity: submitting essays to literary journals, updating my website, answering emails, and engaging with readers. And it was absolutely lovely. My productivity felt focused, and when I resisted the impetus to be artistic, I was able to maximize the effects of this high by actually getting a bunch of stuff done. Once this bonbon and I settled into our groove, the head high felt bright and crystalline while its bodily counterpart was soothing with a toe-tapping electric undercurrent. Sitting at a desk was easy as was bopping around the house doing chores. The high felt well-rounded and robust, making for an ideal edible experience.

“The head high felt bright and crystalline while its bodily counterpart was soothing.”

Grace Notes’ Winter Notes bonbons are available in packages of three. At about the size of half a roll of quarters each, their 5mg of THC is bold without being overwhelming and mild without feeling diluted. They would look charmingly chic on an adults-only cocktail party dessert table, but only during the holiday season. I stand by my assertion there is no excuse for white chocolate. The nerve of Swiss chocolatier, Kuno Baedeker, to create something so asinine in the name of cocoa butter conservation is, in my opinion, unforgivable. I could be using all of that cocoa butter to grease up my ashy knees and elbows—but no, some candy scientist from 1930s Europe decided we should instead eat the greasy cocoa bean by-product instead. Kuno—may you rest in peace, you spoiler of chocolate’s good name—you are redeemed by Grace Notes and a holiday bonbon that I’d be thrilled to find in my advent calendar.