Ranked 162 of 321 in Edibles for feeling Euphoric. 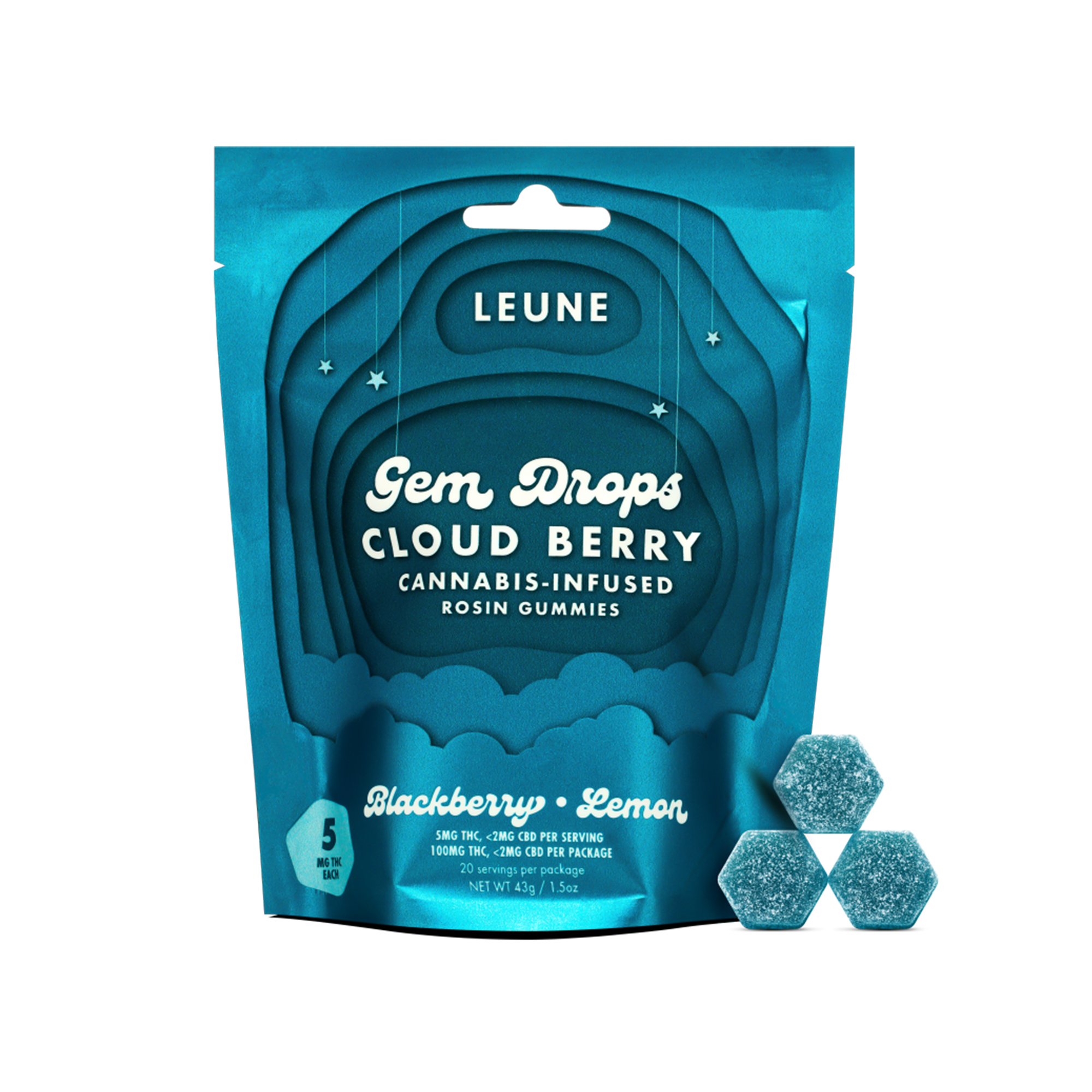 As our committee rates Cloud Berry Gem Drops, we capture their experience in real time through our ratings app and report everything back here.

Ranked 162 of 321 in Edibles for feeling Euphoric.

A subtle buzz that comes on quick and is perfect for micro dosing. A manageable and energizing high that helps one focus on the task at hand.

Best within 2 years of manufacture

A Gem Of A Rosin

IN REVIEW: These top-notch gummy two-packs are just as solid for sharing as they are indulging solo. So get lifted with a friend before an event, go full bore by yourself on an open evening, or microdose through a lazy Sunday. Each piece contains 5mg of THC for 10mg total in the pack, and their Cloudberry option tastes of blackberry and lemon, and is the perfect easygoing, approachable high for cannabis consumers at any level. And beyond the single-source, full-spectrum rosin found in each piece, they're also vegan, gluten-free and contain spirulina for a healthy kick that complements the high beautifully.

These 5mg Gem Drops from Leune contain a heavenly mix of blackberry and lemon, and they all but dare you to stop at just one. So it’s probably a good thing only two come to a pack. For someone with a mid-range tolerance to edibles, ten total milligrams was just what the doctor ordered to get me out of my funk and into the world at large.

“I wanted something that would lift my spirits and remap my trajectory for the day. These worked beautifully.”

I was simply “not feeling it” before I consumed these Rosin Gem Drop gummies. I wanted something that would lift my spirits and remap my trajectory for the day. These worked beautifully. Within 15 minutes I was feeling a wave of joy and an inner warmth that was not unlike being swaddled by some invisible force of nature. It was a complete 180 from my earlier disposition, and it set me off on a variety of chores that I had been putting off.

It was not until I put on a mixtape (iTunes Playlist) and got to Swiffering that I was really feeling this edible. I had entered some sort of autopilot mode and it was all rhythm and no anxiety. I even managed to come up with a new song for my dog because that is what high people who are home alone sometimes do. Only now I had 10mgs of creative inspiration under my belt, and as a result, I was able to flawlessly change the lyrics of “Papa Don’t Preach” by Madonna to “Puppy Don’t Preach” by yours truly. At only 10 mgs between them, those two gummies were really pumping out the euphoria and dare I say, creativity.

When I was done cleaning and dropping verses on my dog, I broke out my new yoga mat and got to stretching. I found that this high really helped deepen my poses and just allowed me to melt into myself. My breathing was more controlled, my posture was less shaky and even my balance felt, well, more balanced. It was as if this high tapped into some hidden reservoir of performance and perspective.

“It was as if this high tapped into some hidden reservoir of performance and perspective. ”

With the Santa Ana winds blowing through my window and some ambient chill music playing in the background, this edible buzz highlighted a fairly transcendental workout. To cap it off, I did about 10 minutes of meditation to really clear the ol’ noggin. It was hard to believe that only a couple hours prior to that I was a ball of self pity and apathy. Thanks to this edible, I had already cleaned the house, logged in some rather strenuous exercise, and even centered myself—and it wasn’t even lunchtime.

When lunch did arrive, however, I was more than ready for it. These Gem Drops did wonders for my appetite, so I didn’t think twice about ordering two Fatburgers and a large fry and inhaling every bit of it. While I would never suggest one to gorge themselves like I am prone to do, it's probably a good idea to eat something before ingesting these. Having these gummies on an empty stomach can bring on a bit of queasiness.

And if you are health and sustainability conscious, you will be pleased to know that Leune’s Cloud Berry Gem Drops are vegan, gluten-free, single-sourced, and contain spirulina. These hexagonal gummies are ripe for microdosing, but they’re also solid for a single chill session that is likely to both inspire you, and connect you with your surroundings.

Absolutely in love with this product!