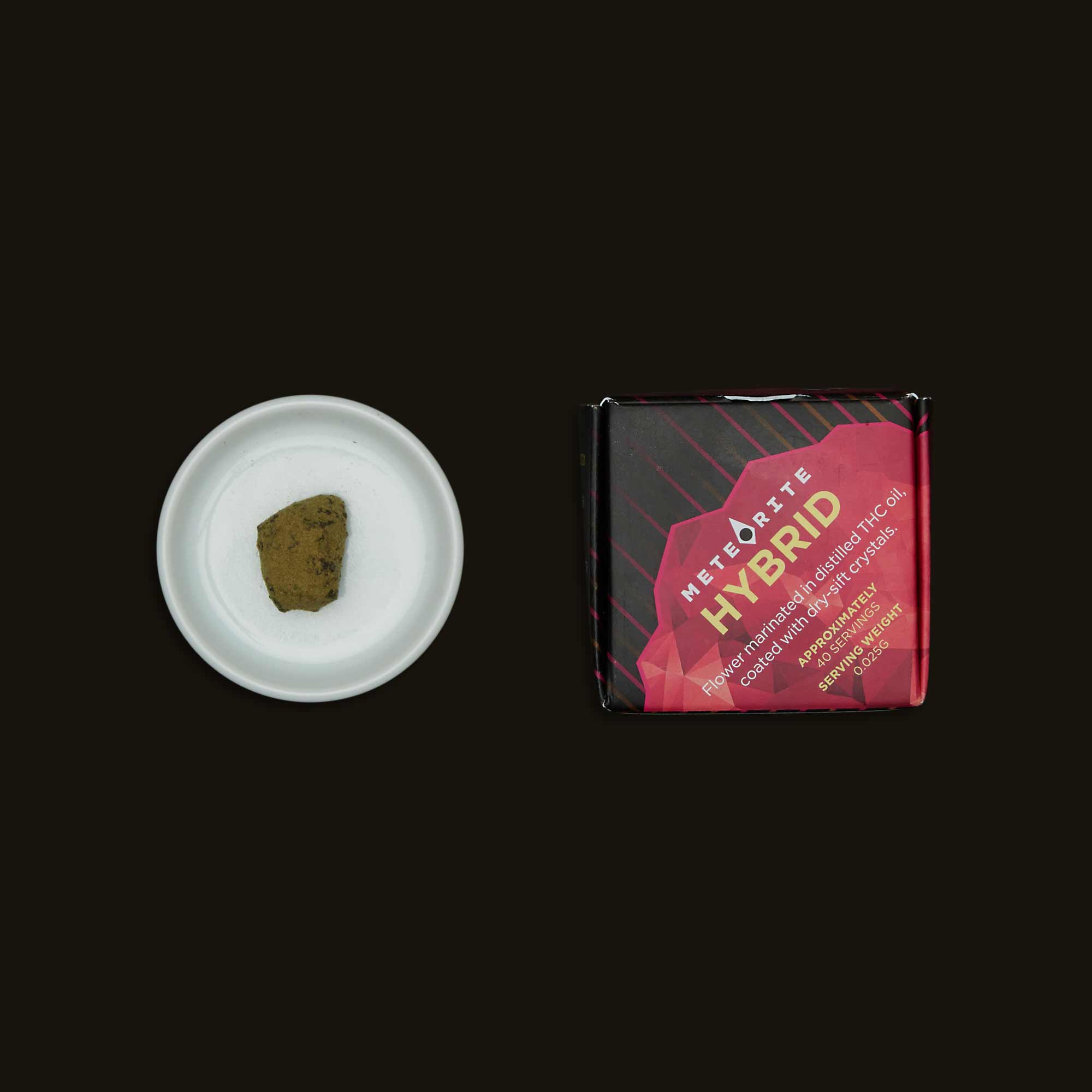 Astronoma's Hybrid Meteorite is a super potent flower, moon-rocked with oil and crystals. You can expect a good high for crashing on the couch and a strong, uplifting head buzz. The potent high doesn't hit you right away, and the aftertaste is kinda gross. Trust this for a satisfying evening smoke. 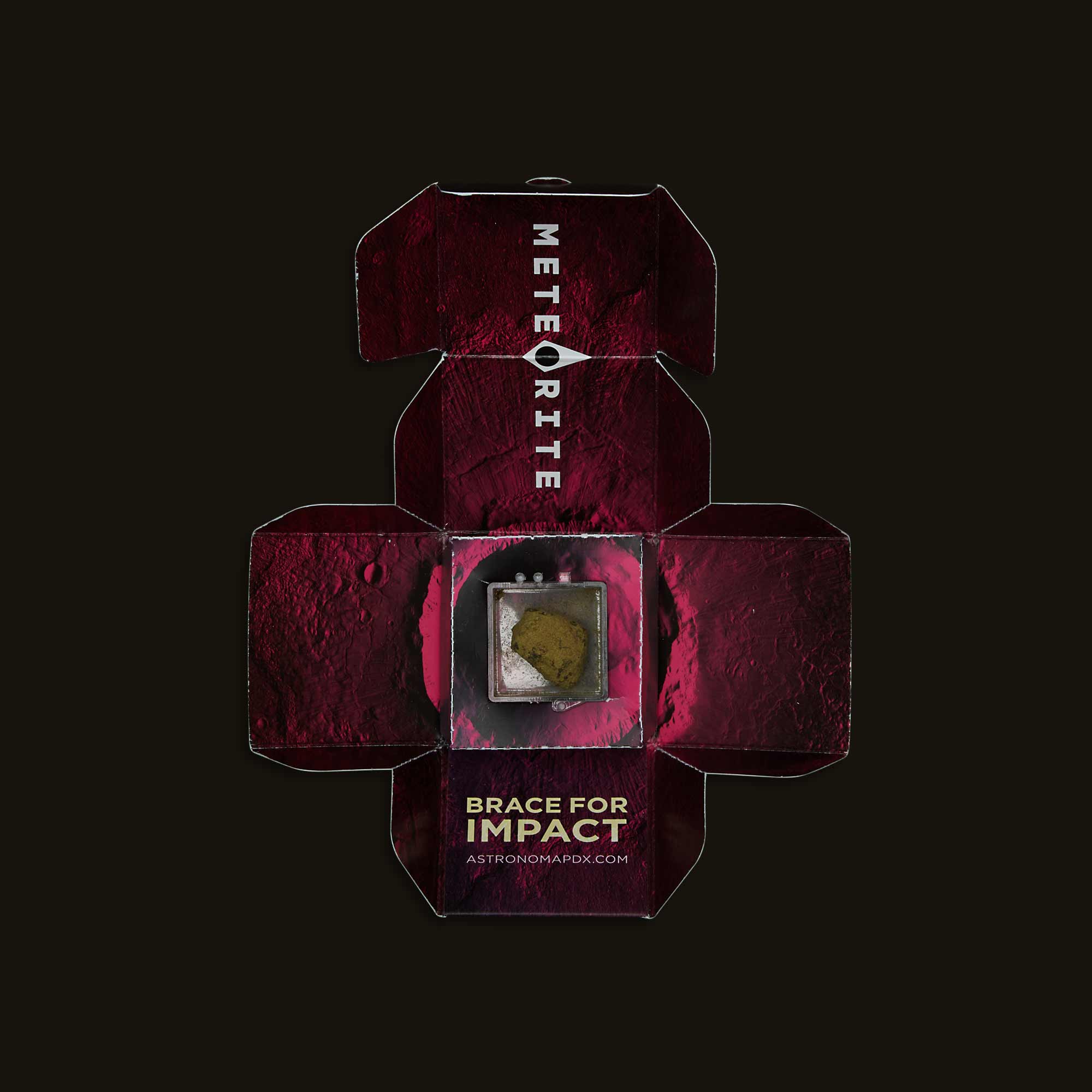 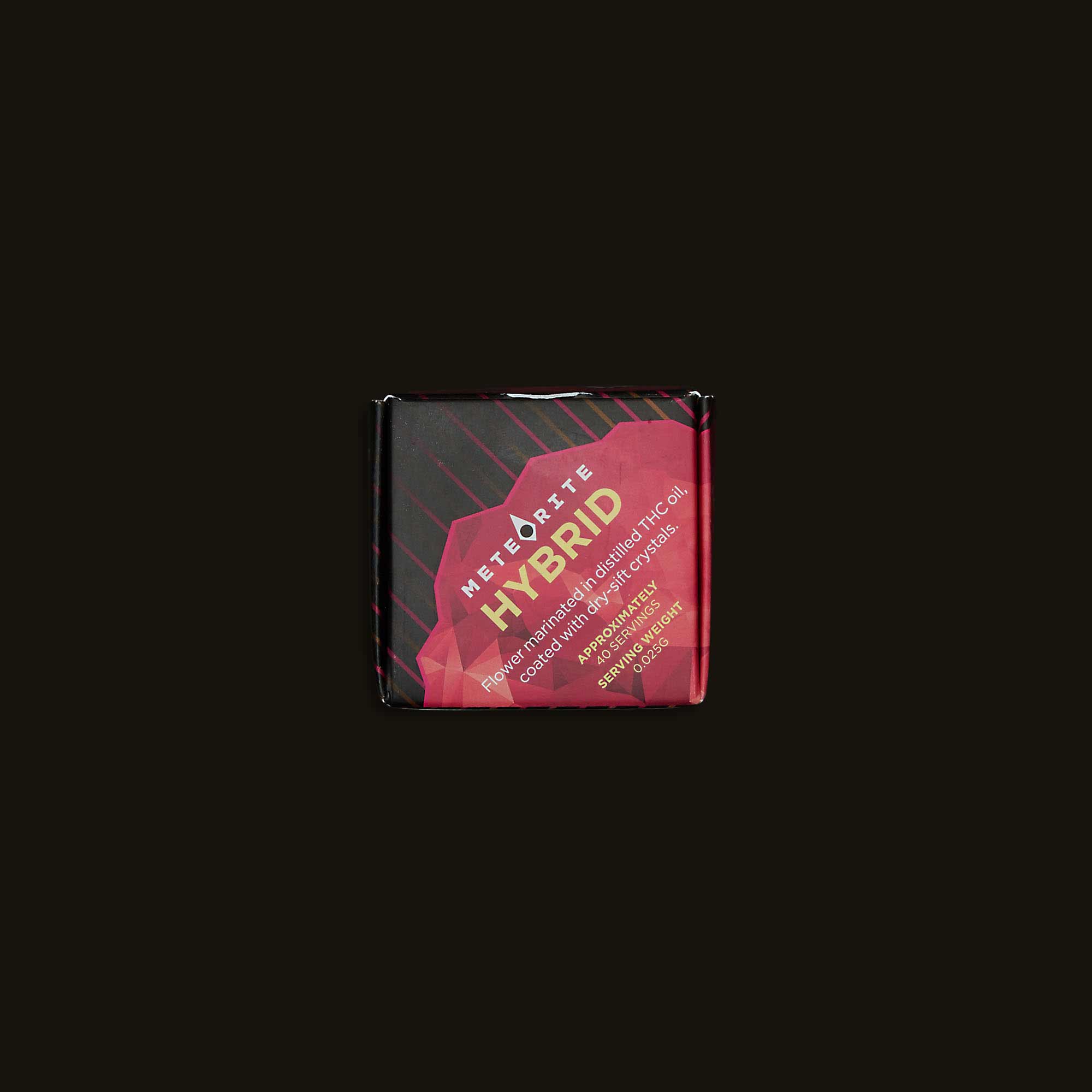 As our committee rates Hybrid Meteorite, we capture their experience in real time through our ratings app and report everything back here.

Travel To The Moon With One Bong Rip

For those days when all you want to do is melt into the couch and gorge on cheese.

Have you ever watched someone order a small latte with an extra six shots of espresso and thought, “Damn, sis, maybe it's time to switch to cocaine?” That is not totally unlike the feeling I had when I saw this shimmery nugget of sugar-dusted, oil-drizzled, pound-cake-dense Gorilla Glue bud. I said to myself, “Damn, sis, how high are you really trying to be on this day?” Naturally, the answer was entirely too damn high, sis. Just way too goddamn high.

“When I hit this bad boy in the morning, I ended up spending the better part of my day wandering the surface of the moon.”

How high is too high? For someone with nothing to lose, that may be a fun question to chase after, but for a working mom with no less than 800 irons in any given fire at any given time, there is a finite amount of high I can deal with during normal business hours. That's not to say this nugget of interdimensional intoxication was too much for little old me. On the contrary, it was the panacea that wrapped my day up in a tight little bow—when smoked in the evening, that is. This probably won’t come as a shock to anyone, but when I hit this bad boy in the morning, I ended up spending the better part of my day wandering the surface of the moon.

Meteorite testing day one started with a doomed (and sober) visit to the DMW where after hours of torturous waiting I took the worst ID photo of my life. I hurried home in a tearful, narcissistic fervor and went hog wild on my first hit of the meteorite. Gorilla Glue (GG) is a favorite strain of mine for calming the anxiety produced by my oft-bruised ego, but this nug was to Gorilla Glue what Bruce Banner is to the Hulk. GG was in there somewhere, but instead of mitigating my mood, it just came in like a bright green wrecking ball and started fucking all my shit up.

I knew as soon as the acrid smoke touched the tip of my tongue that I had potentially made a huge mistake. I cleaned the holy hell out of my bong in anticipation of this otherworldly toke nugget but the melodiously skunky perfume I typically associate with GG was nowhere to be found. Instead, I was struck with an acerbic hodgepodge of harsh-tasting smoke. Even though the flavor was rough, the smoke was surprisingly bearable and I suffered no fits of coughing or suppressed squeaks of throat discomfort. I wouldn't call it an unpleasant smoke per se, but it is far from velvety and certainly not the cannabis flavor bomb I was expecting. Then again, at 47.53% THC, I suppose an aggressive mouthfeel is obligatory.

The high started off bright and invigorating, lifting my mood and sending electric vibrations up and down my entire body. I banked on that feeling and began re-organizing my family's various closets. Y’all, this was a mistake. The vibrant onset faded inside of an hour and the remainder of the high felt not unlike someone slowly drawing the stage curtains shut on my brain function, or maybe something like a spotlight lazily narrowing its beam on my mind before fading completely, leaving me alone in the dark. As soon as I'd emptied my first closet, I was exhausted. I melted into a puddle on the couch and the rest of the day ended up a wash.

“Sometimes a person just wants to end their day high as bird balls.”

Mistakes are just opportunities for learning is something I read on a poster once, but it applies here, too. Day one of testing was spent in a glazed-donut haze, but on my second go-round with the meteorite, I smoked in the evening after fulfilling all the day’s tasks. I anticipated the less-than-appealing flavor of the meteorite, and frankly I'd started to come around to the asperous smoke. My brilliant friend, Hindsight, told me to sit my stoned ass on the couch with a sick plate of night cheese and an ambitious Netflix lineup. It was a slam dunk. Session two was far more successful for a couple of reasons. It provided some much-needed punctuation to a day that would’ve otherwise felt neverending. I also went into the second session knowing I would get absolutely nothing done. Once I realized the true purpose of this product was super deliberate, unapologetic intoxication, I was all set to sink into it. There wasn’t much nuance to the high, but complexity for complexity’s sake is asinine. Sometimes a person just wants to end their day high as bird balls, comfortably melting into their couch while eating cheese and laughing at nothing.

It's not often that I'm able to share the products I'm testing, but this meteorite proved plentiful beyond expectations. One gram of this stuff contains an impressive 40 servings. So, I shared a bit of my day-two allotment with my teetotaling husband who—understandably—looked at me with bloodshot eyes after one bong rip and said, “I'm on the moon.”