Jungle Boys' Gelato flower is a sweet and earthy hybrid with a typically relaxed high. You'll likely feel calm, balanced, and uplifted. If you're already feeling sleepy this high will lean that way, but if you have some energy left this is more of a giggle high. Look to this for a mood boost or a happy buzz to mellow out your day.

Ranked 55 of 339 in Flowers for feeling Relaxed. 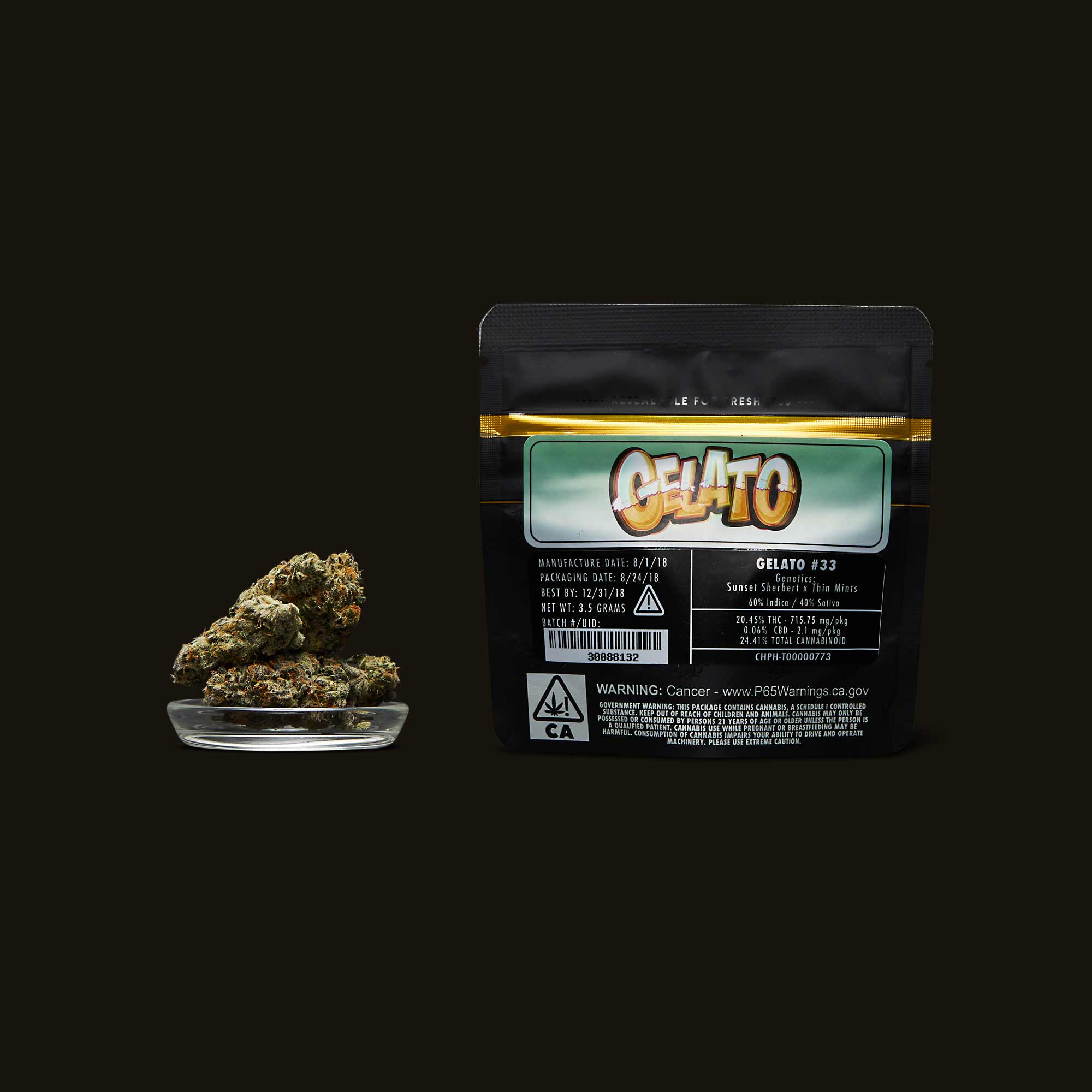 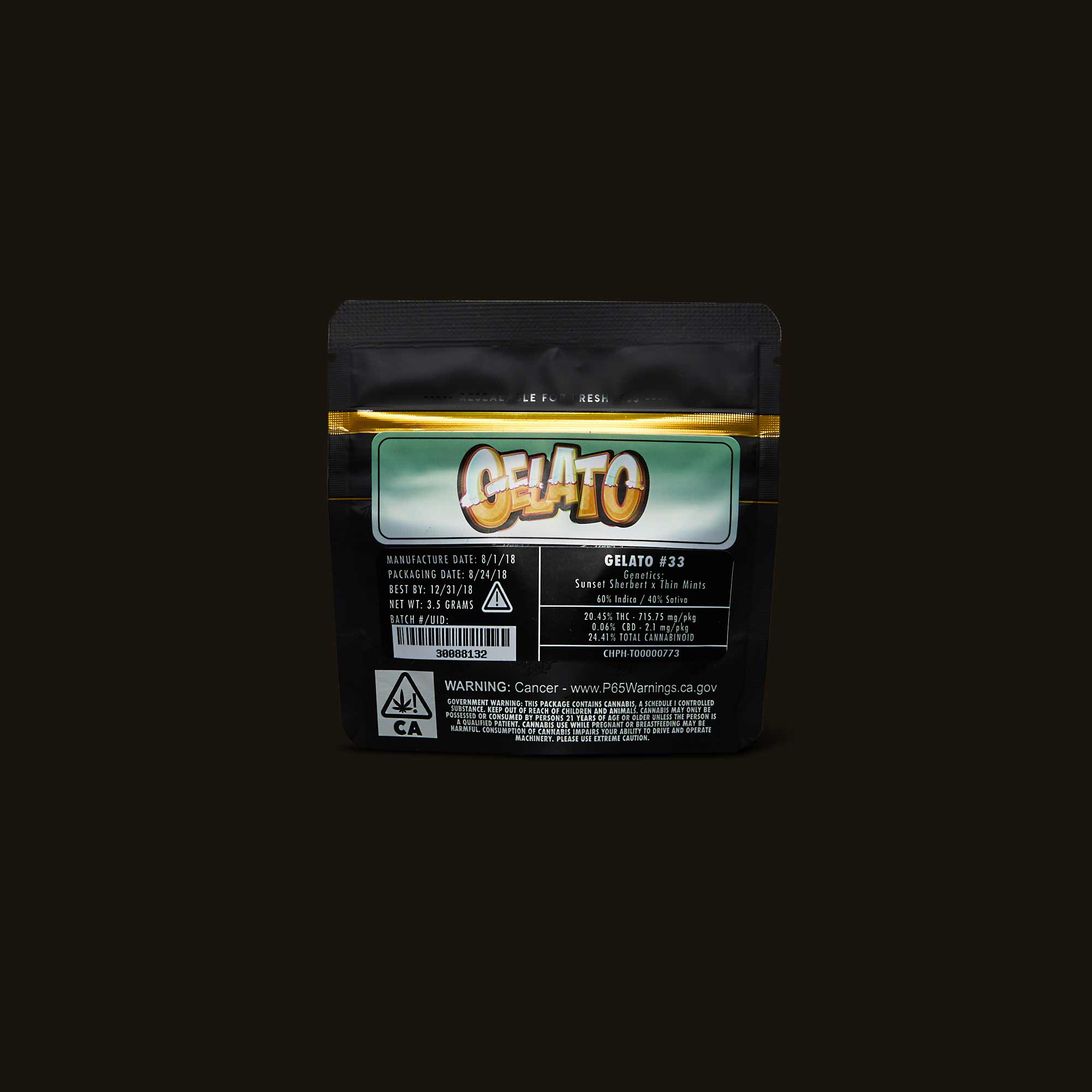 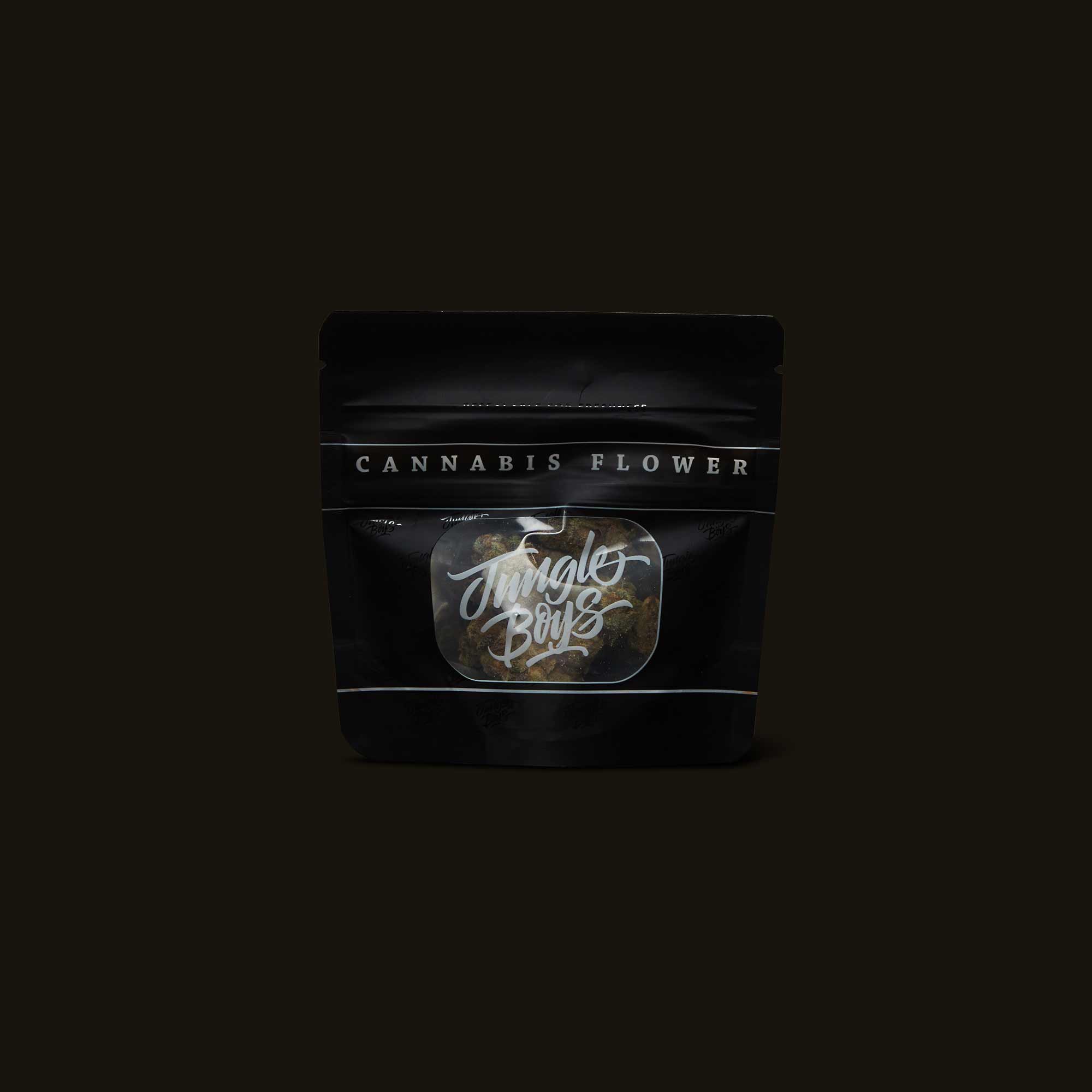 As our committee rates Gelato, we capture their experience in real time through our ratings app and report everything back here.

The info below is based on at least seven sessions completed by Proper Cannabis Committee members.

Ranked 55 of 339 in Flowers for feeling Relaxed.

Lesson learned: If it smells good, you're in for a good time.

My nose has never been very good at its one job: smelling things. Plenty of people dream about having the power to fly or walk through walls, but I dream of one day being able to accurately identify smells. Because as it stands now, I can barely tell a lavender plant from a eucalyptus tree smell-wise. For no less than five years, I’ve been trying to identify the scent of the desert, a dusty, almost leathery fragrance that rises through the floorboards whenever I leave my Los Angeles apartment for more than two days. It’s as familiar to me as the back of my hand and yet I can’t seem to put my finger on it.

“Flower that smells good almost never lets me down high-wise.”

When it comes to weed, I’m not much better off. Which sucks because identifying the plant’s terpenes (compounds that give plants their smell) can tell you a lot about what kind of high you’re going to get. A hint of cloves, for instance, can indicate the presence of myrcene, a sleep enhancer, while hints of lemon let you know that bud contains limonene, an energizing terpene. Put a citrusy sativa in front of me, however, and I’ll probably tell you it’s a sleepy indica hybrid. But in one regard my nose never fails me: Flower that smells good almost never lets me down high-wise. Because even if I can’t identify what specific aroma attracts me, I know a flower is going to be good when I can’t stop myself from breathing it in. What can I say? My nose may be ignorant but that doesn’t stop it from having opinions.

Such was the case with Jungle Boys’ Gelato. I can’t tell you what it smelled like specifically, but when I opened the pouch to take a big inhale, I fell for it—hard. Its funky, dare I say juicy (?!) aroma both delighted and comforted my senses. It helps that Jungle Boys is known for developing pungent, potent flower that delivers a hefty high after just one hit. On a recent road trip to Vegas and the Grand Canyon, I rolled a very rustic-looking joint, crumbling the flower with my fingertips. The more I worked with it, the more it released the pungent fragrances that captured my heart. It was love at first whiff.

A cross of Sunset Sherbet and Thin Mint GSC, Gelato is an indica-dominant hybrid strain—and I know that because it said so right on the bag. This essentially means the high can vary depending on your base mood, but you’re more likely to feel mellow than uproariously energized. I tend to like indica-dominant hybrids the most because they leave me feeling relaxed yet buoyant. They’re the kind of joints I like to take to concerts and family outings because I know they’ll keep my anxiety in check without steering me toward the next available couch.

So, on a relaxed Friday night in Vegas, I pulled in a few buttery hits and knew my nose had been right; we were in for a good time. Right away, I could feel the lingering tension from a long day of driving start to dissolve. Within minutes the body high descended, leaving me feeling like I was at the dentist’s office in a lead smock. Mind you, I like a nice weighted blanket. You get all the benefits of a hug without the messiness of interacting with another human. But for roughly $180 less, I got the feeling of a full-body hug while still being able to get up and move around—something you can’t do with a 20-lb blanket.

With a suite at the Venetian and all of Vegas at my disposal, I drew a bath. I then handed the joint to my girlfriend, who has the herb tolerance of an infant. She took two tokes and was promptly transported to a level-ten comfort zone. “Gelato can stay,” she said, curling into a fetal position with a glass of champagne in hand. We chilled like that for the better part of two hours, steeping in smoke-infused steam until our fingertips wrinkled and we ran out of bubbles. Ultimately, the munchies took the wheel, carrying us out of the bath and into the sitting room where we ate room service in hotel bathrobes and watched a show about extreme treehouses.

When I tested Jungle Boys’ Gelato again the following day, I did so in the unforgiving desert heat while perusing a junkyard of abandoned neon signs. Even with sweat dripping down my spine and a champagne hangover clouding my brain, I felt relaxed and uplifted as can be. I took pleasure in the most minute details—busted light bulbs, a cool breeze, the texture of gravel under my feet. I never thought I’d be so engrossed in a bunch of old signs. Back in the car heading toward the Grand Canyon, I sunk into the passenger seat with an impossibly cold LaCroix and a bag of Pirate’s Booty. One can only hope heaven is something similar.

I suppose the major benefit of Gelato is this: You technically have the euphoria and comfort to paint the town red, but you’d be just as happy taking a walk around the neighborhood with a bag of chips. Well balanced and flexible, it’s the kind of flower I’d want to pack for loosely planned adventures because I know it’ll rise to any occasion. Clearly, my nose had a hunch this was the case.

Be the first to review Gelato from Jungle Boys and help others find their high.