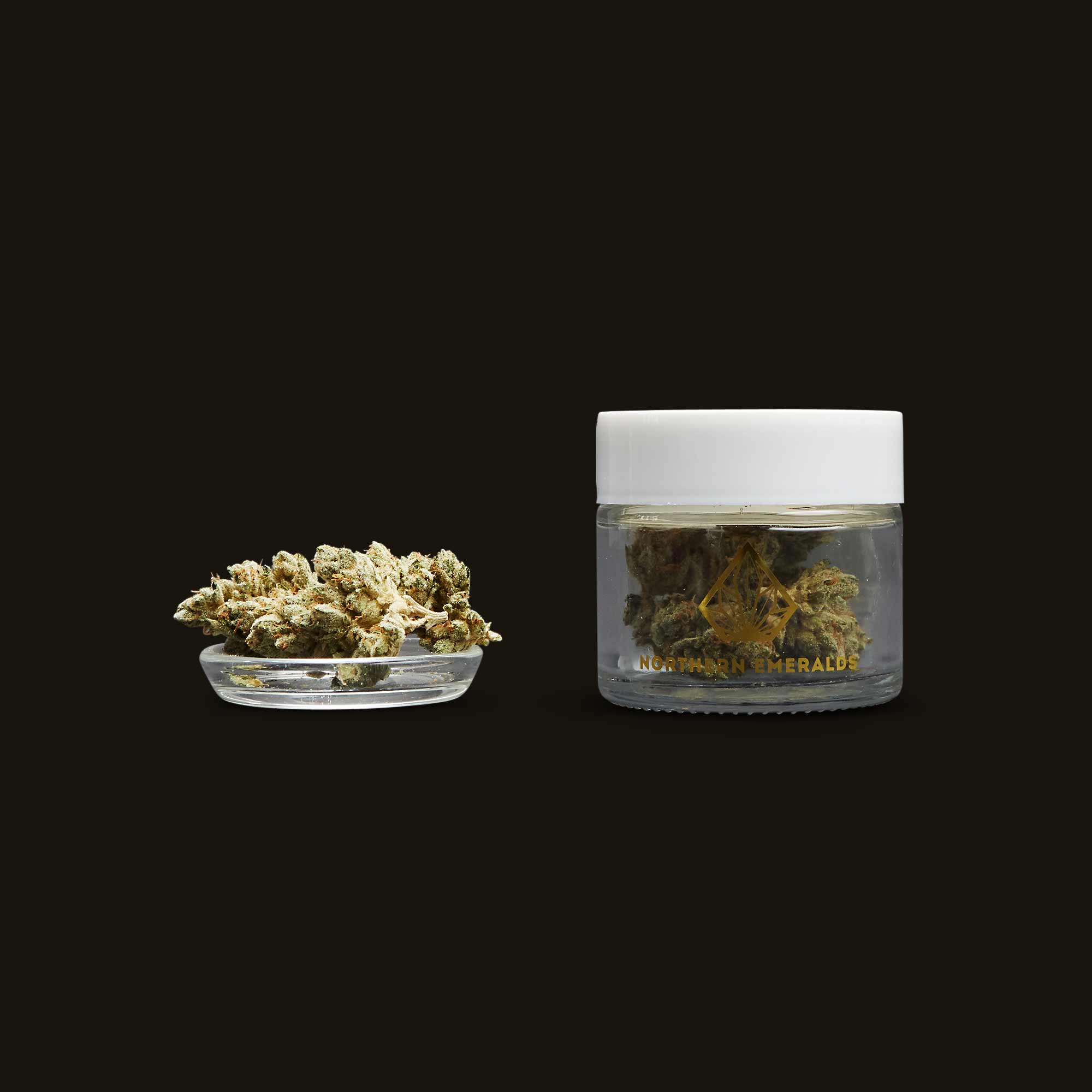 Northern Emeralds' Titan OG is an earthy indica flower with fragrant hints of diesel and grapefruit. It's a perfect nighttime high, as you should feel both unwound and uplifted. If you're feeling energetic, this could lend itself to a more social high or an evening workout. If you're tired when you light up this flower, it should help you transition into bedtime.

Ranked 39 of 236 in Flower for feeling Euphoric. 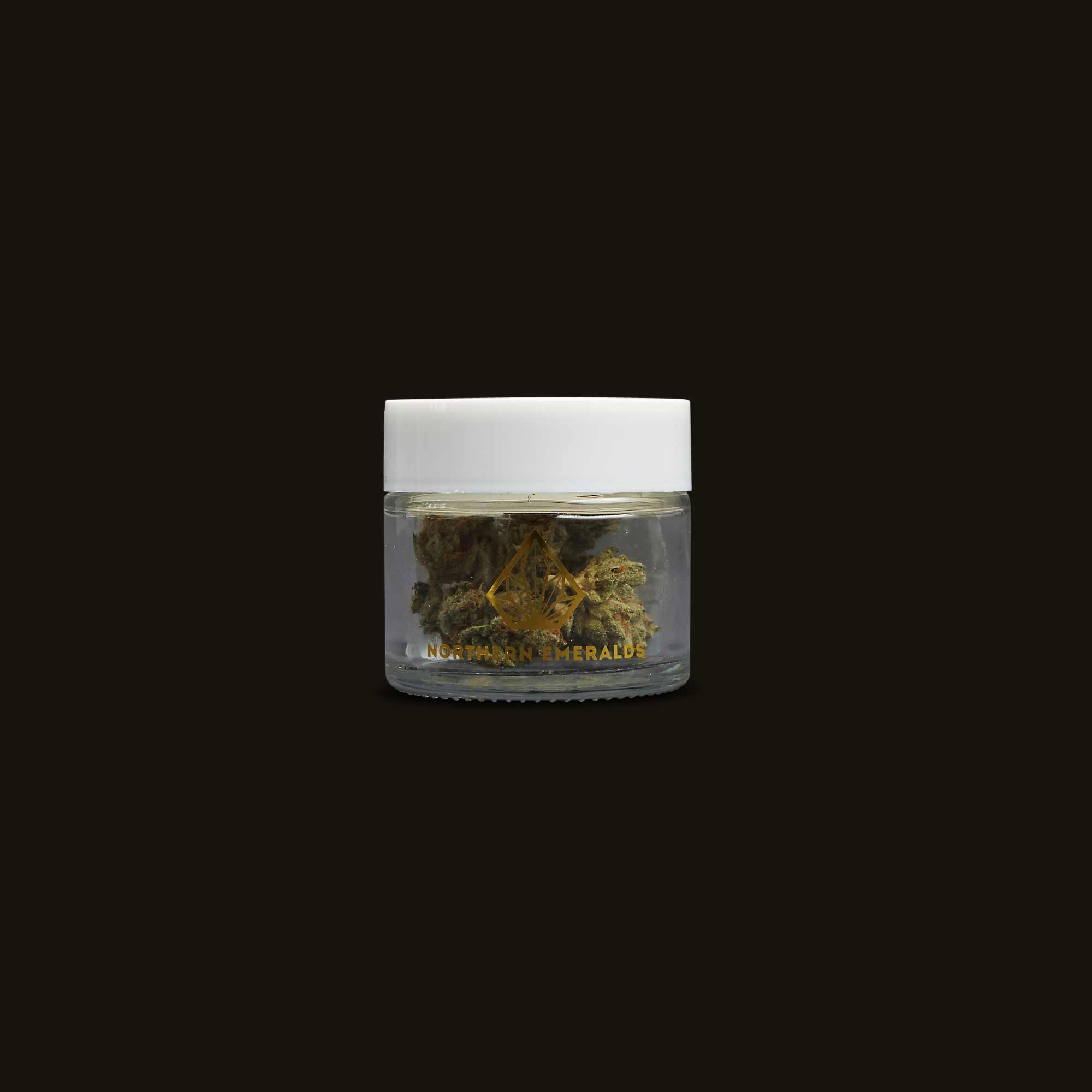 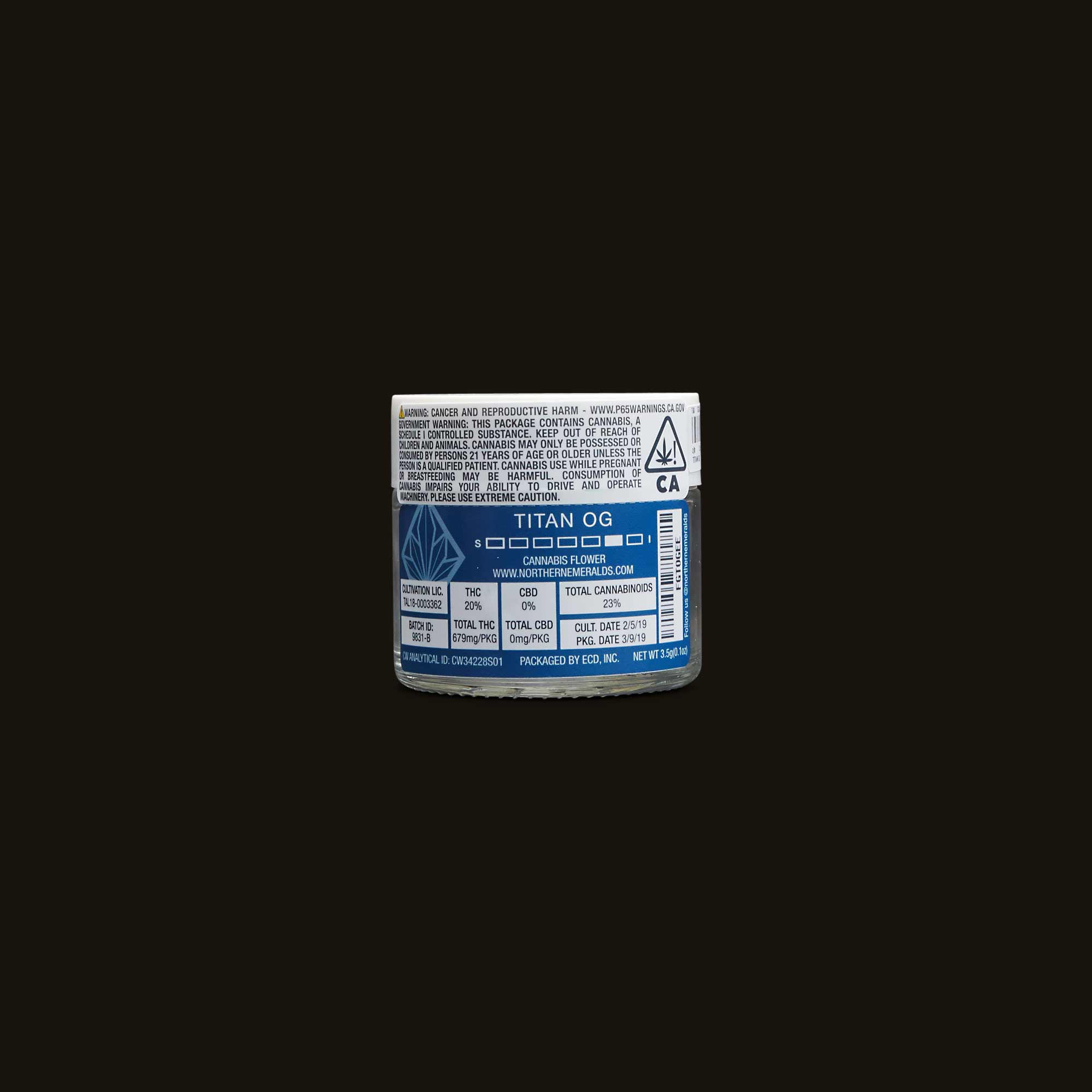 As our committee rates Titan OG, we capture their experience in real time through our ratings app and report everything back here.

Ranked 39 of 236 in Flower for feeling Euphoric.

This Flower Is An Overachiever

It might be recommended for sleep, but I'd turn to this flower any time of the day.

I don't really like being told what to do. I’m more of a queen bee and less of a drone, ya dig? Which is why when I review an indica-dominant product that suggests its most beneficial feature is sleep, my first inclination is to use it first thing in the morning. You don't tell me when to sleep, weed. I tell you when to sleep. For the record, I am almost always thrilled by the consequences of my contrarian actions. Northern Emeralds’ Titan OG flower is a perfect case study as to why.

“I am almost always thrilled by the consequences of my contrarian actions.”

Titan OG, the indica-dominant hybrid from Humbolt County-based Northern Emeralds, is touted as a remarkable strain for relaxation with a punchy 22% THC delivered in a cottony cloud of woodsy, citrusy smoke. The inhale was rich without being too heavy and moved comfortably through my chest. The exhale was just as easy and loose—no choking, no wheezing, and no weird drool moments.

I was sitting in my Toyota Camry parked outside Planet Fitness at 9:15 in the morning when I smoked this bowl. I committed to the whole bowl, too—not just a few hits. It was a smoke session that lasted an entire morning radio commercial break, which feels like forever but is actually more like 3 to 5 minutes. I cleared the bowl of my palm-sized glass piece and shook it out on the ground as I bounced out of the driver's seat and readied myself for a vigorous morning of exercise.

I started by hammering away at the elliptical machine for a full 35 minutes with zero perspiration. Then I moved over to the circuit training area where I alternated between strength training and step aerobics while remaining completely dry. Finally, after more than an hour of placid pumping, I copped the gentlest sheen of Hollywood sweat, so ephemeral it might have been mistaken for expert highlighter. I was exercising on some new plane of existence. I was working hard, but I remained completely non-plussed. No grimaces, groans, or heavy panting of any kind left my body for the entire 2+ hours I spent at the gym.

My entire morning at the gym felt like a cool breeze. No matter what machine I landed on, I was crushing reps and logging steps with no botheration whatsoever. I had unlocked a new life achievement where queens don't sweat, everything is easy, and nothing hurts. Planet Fitness was shook. The high lasted through the duration of my workout (about 2.5 hours) before blissfully dissipating into a vapor of complacency. The chilly vibes lasted well into the afternoon.

“Northern Emeralds has cultivated a modern-day panacea with their Titan OG—not just for anxiety and insomnia, but for life itself.”

Later that evening I auditioned Titan OG as suggested. My evenings don’t belong to me until my son and partner have gone to bed. Then I spend the next couple of hours burying my face in my sketchbook and catching up on trash TV. And just as Titan OG elevated my morning ritual to a level I had not anticipated, so did it enhance my evening ritual. Titan OG was just as effective at unlocking a satisfying sketchbook sesh as it was at informing my celestial body that I have evolved past sweating.

The results of that night’s sketch fest included a whimsical interpretation of the High Priestess Tarot card, which was immensely gratifying to draw. The soft scratching of my mechanical pencil against the creamy paper, the smooth grain of each sheet against the meat of my palm, the whisper of screaming drunk MTV singles colorfully occupying the negative aural space around me—everything coalesced into a perfect lullaby of my own creation. After resisting my heavy lids for over an hour, I closed my moleskin and shuffled off to bed. I slept soundly and woke up eight hours later ready to win the day.

I had two disparate, yet authentic and memorable experiences inspired by a couple nugs of Titan OG. In one instance, the syrupy weight of the indica resulted in a nearly meditative weight training/stair stepping/cardio madness sesh. In another instance, I felt so comforted that my creativity found new purchase. In each setting, Titan OG managed to improve my life. The bottom line is this: Northern Emeralds has cultivated a modern-day panacea with their Titan OG—not just for anxiety and insomnia, but for life itself. I don't know if it will keep you from sweating at the gym, but it should certainly expand your senses.