Prūf Cultivar's Tangie Biscotti flower is a cheesy citrus hybrid that tends to deliver an uplifting head high. The body buzz is often comfortable while the head high makes your morning a lot more tolerable. You might catch a mindful moment in the onset of the high, which is good for meditating or journaling.

Ranked 257 of 491 in Flowers for feeling Euphoric. 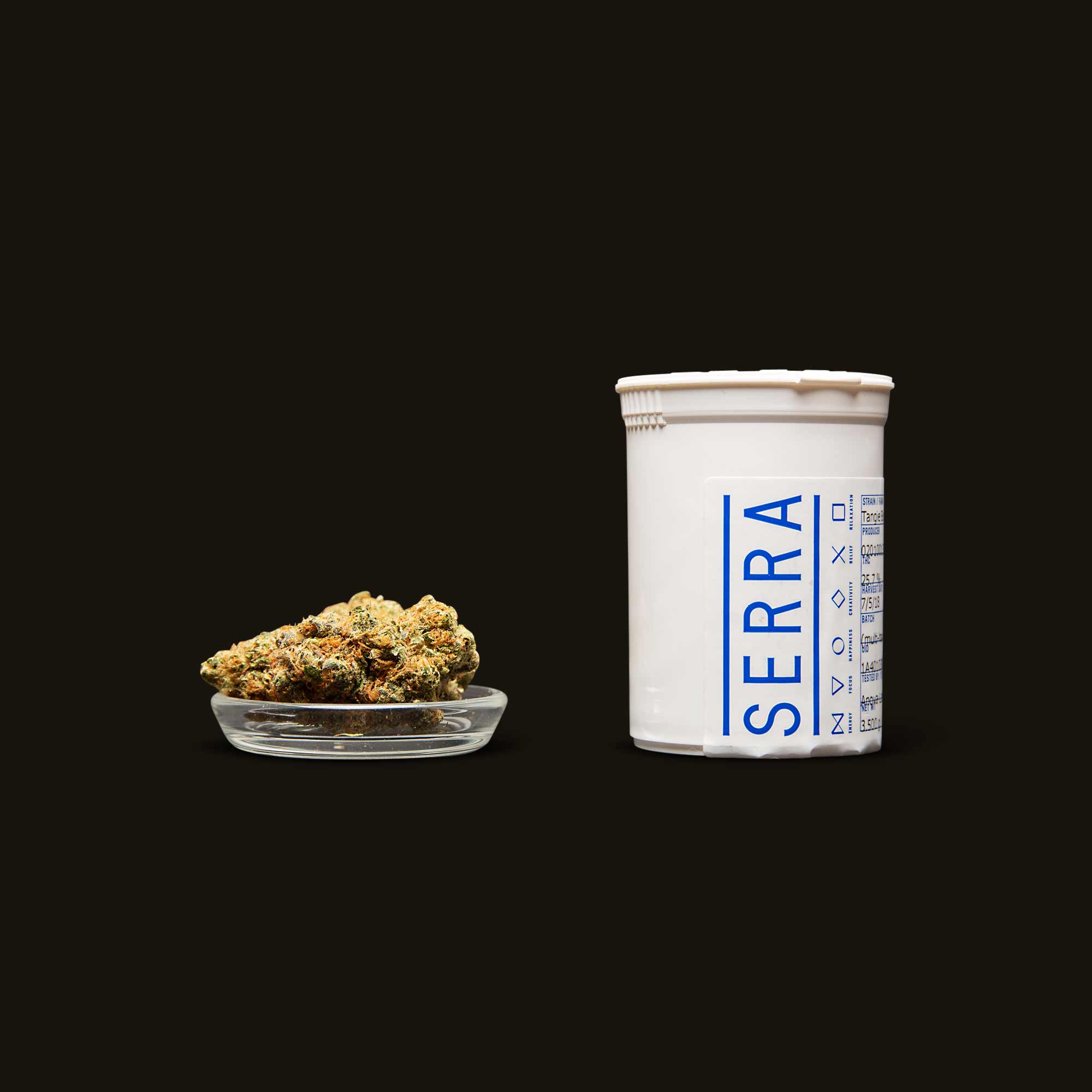 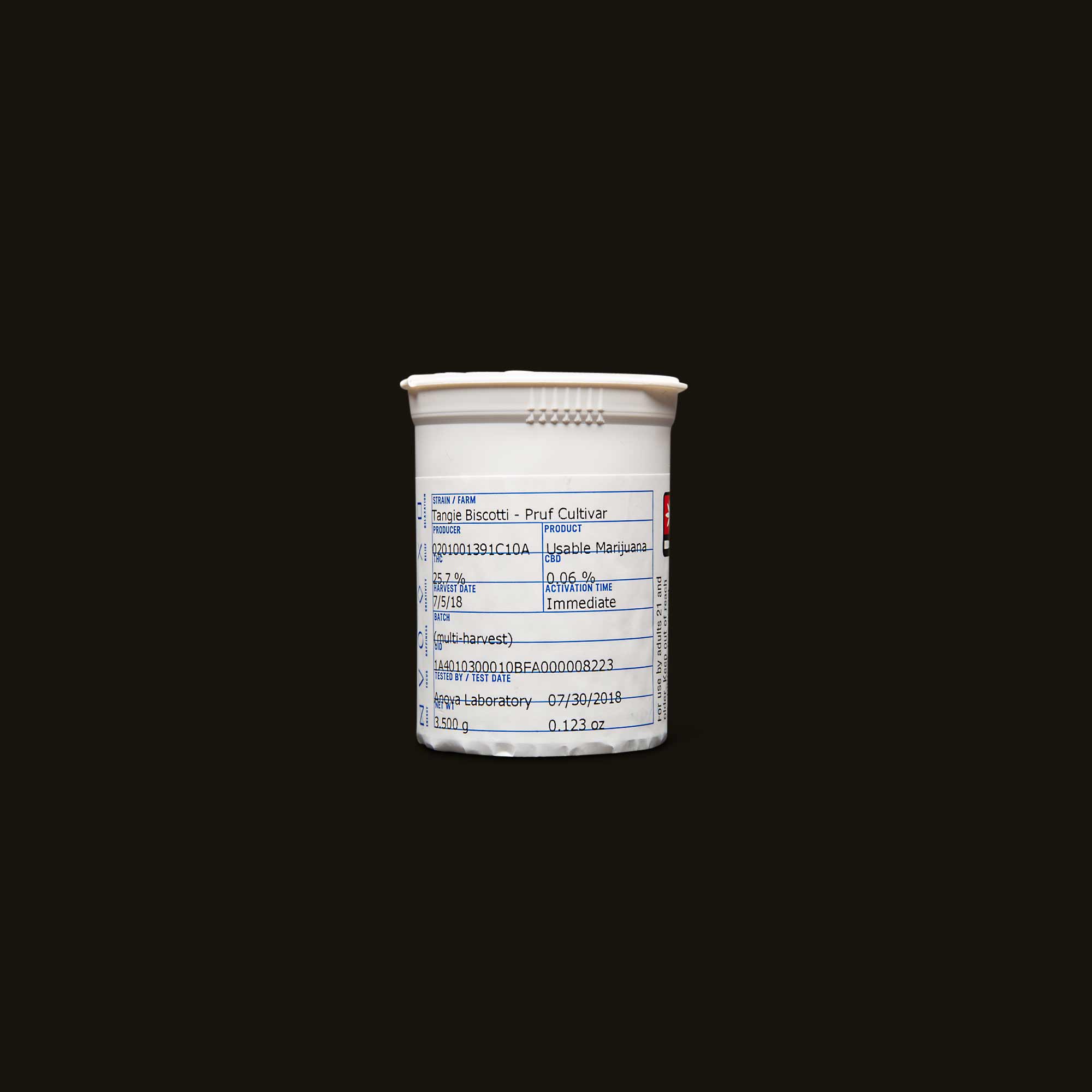 As our committee rates Tangie Biscotti, we capture their experience in real time through our ratings app and report everything back here.

Ranked 257 of 491 in Flowers for feeling Euphoric.

Funky Joints To The Front, Please

This joint may have smelled like poop, but I ended up being the butt of the joke.

Before I smoke a joint, I first wave it under my nose and inhale its perfume. I hold that cannabis right up to my face and draw long, dramatic inhales, indexing every nuance of aroma, sighing and muttering over the complexity. You can tell so much from that initial, deliberate sniff. It may belie a sour, pungent smoke or a sweet, piney, aromatic cloud. It may be powdery and light, dense and sticky or some amalgam therein. That initial sniff test is so important to the overall experience of smoking that I never go without it; it’s a ritual as important as the experience itself. And when I performed this ritual before lighting Prūf Cultivar’s Tangie Biscotti pre-roll, I anticipated something bakery-sweet with a fresh, citrusy tang. What I smelled, however, was a shocking contradiction of that assumption.

“What were the odds this had been in contact with a butt?”

You guys, this pre-roll smelled overwhelmingly of doodoo. And I’m not talking about the funky skunk-spray odor commonly associated with cannabis. I’m talking about literal excrement. The joint smelled as if someone had just recently pooped it out of their, ahem, butthole. I put the joint down and considered it for several minutes, chin in my hands and brow furrowed. What were the odds this had been in contact with a butt? Had I ever smelled a flower quite so foul? Was I mistaking the rare aroma of some prized terpene for crap? Did I have poop on my nose and was I smelling that? (OK, that one was pretty easy to rule out, I’m not that gross.) The bottom line is that I trust the process, so I was confident there were no booty smuggling shenanigans involved in the making of this joint.

I wish I could tell you there was a multifarious flavor profile that offset the disturbing fecal odor, but I cannot. This joint tasted like dried-up lawn clippings. It was a surprisingly smooth and easy smoke, and in those first few drags, my interest was renewed. But the question remained: How could something smell so bad, taste so bland, and still smoke so smoothly?

The answer may lie in Prūf Cultivar’s cultivation process. By their own admission, their Tangie Biscotti has a “nose [that] would stop traffic. A crescendo of rare fruit and funk.” Yes, I can attest to the deep funk, but any fruit or flower notes were buried under olfactory manure. At 25.2% THC and 0.11% CBD, however, this flower was quick to overcome its backside bouquet. I forgot about every face-pinching bit of nastiness leading up to the onset of this joint once the high overtook me.

Session one was beautiful and bright, bubbling with euphoria. I bounded up from my basement office into a warm, sunny fall day and promptly flaked on every commitment I had. I spent the day prancing around the city with the weightless effervescence of a teenager on senior ditch day. The doodoo odors were no longer a consideration. I was flying high on a magic carpet and the air in the clouds smelled great.

“This picture-perfect day was all the result of the poop joint.”

The high was bold and intoxicating, coaxing my heart chakra wide open and making me feel like a conduit for all the good vibes in the universe. I floated through a number of social interactions with sugary warmth while an adventurous spark drove me to find new ways to enjoy the city I’ve lived in for over a decade. The body high was sensual—all cashmere and comfort. There was a sexuality to it that simmered without ever being provocative. It was effortless to manage, never overwhelming, and deeply uplifting. The entire day was spent in a workable euphoria.

It wasn't until a few hours later when the last vestiges of the rhapsodic high had evaporated that it occurred to me: This picture-perfect day was all the result of the poop joint. In summation, smell your joints before you smoke them and consider trying them even if they smell like a hot butthole. It may just be the best decision you ever make.

Be the first to review Tangie Biscotti from Prūf Cultivar and help others find their high.