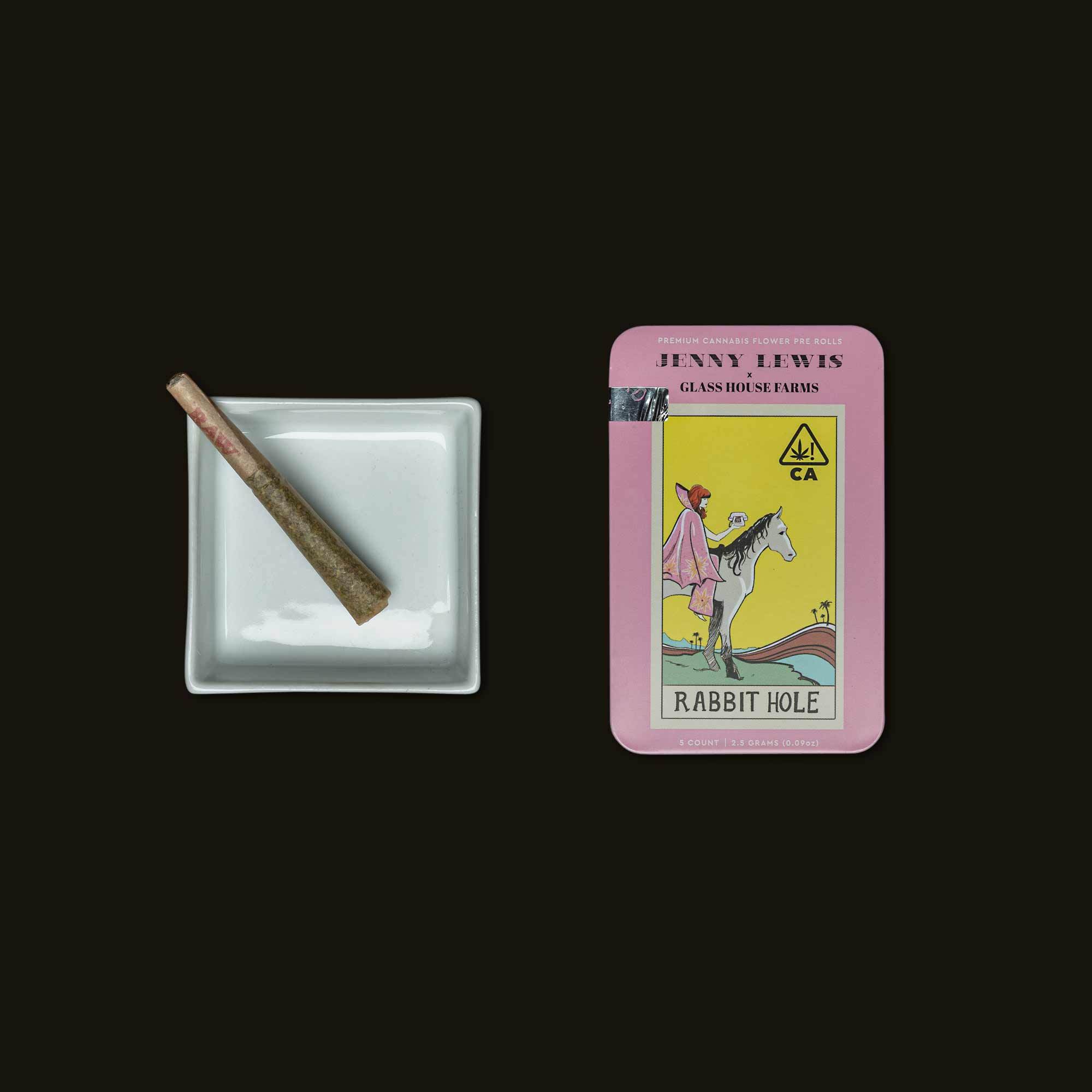 Glass House Farms' Jenny Lewis Rabbit Hole pack of pre-rolls is loaded with a sativa flower of Sour Diesel origin. Each joint delivers an herbal flavor and a euphoric head high, which is matched with a mild and soothing body high. It can hit hard with a paranoid onset, but just sit down and let it pass. Then you can crash on the couch in peace. 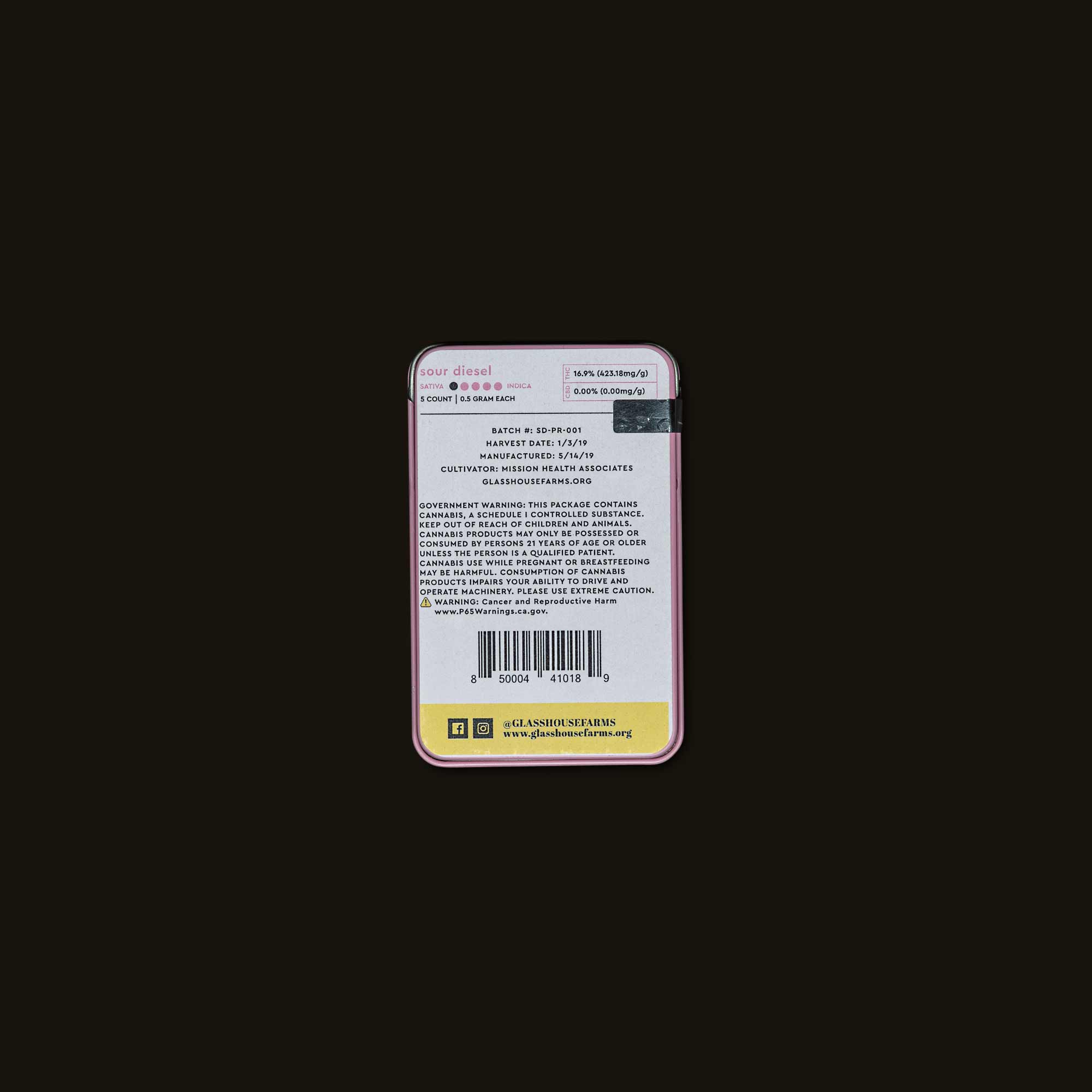 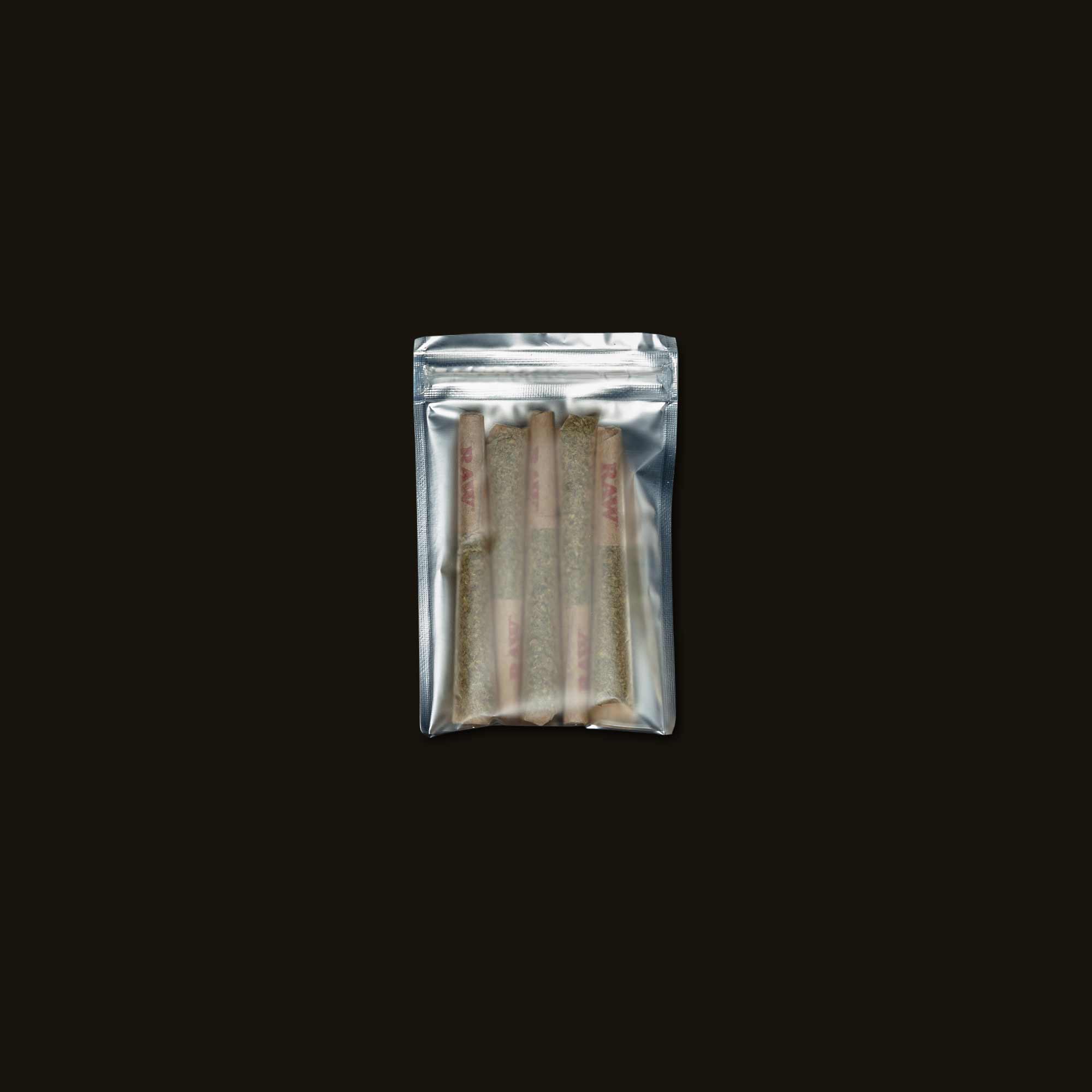 As our committee rates Jenny Lewis Rabbit Hole, we capture their experience in real time through our ratings app and report everything back here.

These Pre-Rolls Really Will Send You Down The Rabbit Hole

If you’re one of those people who likes to lose touch with reality after just a toke or two, this is the perfect pre-roll for you.

IN REVIEW: Cannabis newbies would be wise to stear clear of these Jenny Lewis Rabbit Hole pre-rolls by Glass House Farms. As reviewer Samantha experienced, they can be overpowering and a bit too trippy for comfort despite having a relatively tame THC percentage of 16.3%. The packaging of this pre-roll pack might be too adorable to resist, but definitely exercise caution when trying the product itself.

When Alice went to Wonderland she encountered fantastic talking flowers, a wise caterpillar with his hookah, and a fabulously mad hatter at a tea party. But before she could get to the grand adventures, first she had to fall down the rabbit hole. Sometimes the entry into a world of wonder requires plummeting through a swirling darkness. That’s what this joint is like. To get to the giggly nonsense part, first you have to fall hard. If you’re one of those people who likes to lose touch with reality after just a toke or two, this is the perfect pre-roll for you.

Singer Jenny Lewis helped “create” this strain, whose seeds were supposedly first distributed at a 1991 Grateful Dead Concert. Other articles have labeled the strain as a Sour Diesel, and while it did have that classic sour citrus aroma, it just didn’t feel like that old familiar strain to me. The info I had verified that it is a sativa, with a lineage going back to Chemdog 91 and Super Skunk. While it only has a middling THC content at about 16.3%, it delivers a much more potent punch than that number would lead you to believe.

“Everything felt like a funhouse version of the apartment I had just been in moments before.”

The first time I tried this pre-roll I was cat-sitting for a friend. I stepped outside and took a few puffs. There was an earthy herbal undertone to its classic citrusy sativa flavor. I only coughed once, and I usually hack up a lung, so it was a fairly mild and smooth smoking experience. However, that was the only mild thing about it.

When I went back inside, I was instantly off-kilter. Everything felt like a funhouse version of the apartment I had just been in moments before. Being a little too high in a new space is especially jarring to me, since I don’t have a good read on what normal actually is. Everything, including me, felt a bit stretched out and wobbly, like Alice after she drank from that tiny bottle. It hit me so hard that I was suddenly too high to figure out how to open a can of cat food. The cats were not happy about this. They told me. And much like the Cheshire Cat, there was a dark undertone beneath their cute meowing smiles.

There was a dizzying paranoia to the stimulating high that forced me to sit down. I felt like I couldn’t get my bearings as the room swirled around me. There was a tightness in my chest that felt like the sudden realization I had forgotten to pick up the kids at school. Only I don’t have any children. Every few minutes I would check to make sure the cats didn’t get out, but every time they were just sleeping. So, I sunk into the couch and eventually figured out how to turn on the TV. After an hour or two, the high settled down and I fell into a nice groove just watching whatever happened to be on.

The second time I smoked this I was at a theater where I perform at all the time, so I knew I wouldn’t feel weirded out by a strange new location. Out in the calm back patio, I shared a few puffs with a friend. Together we only smoked about half of the tiny half-gram pre-roll. Then we both fell in the hole. He’s also a regular smoker, and we both looked at each other with that almost instantaneous moment of, “shit I’m a little too high now.” He was about to leave, but then had to wait since he felt like he couldn’t drive. Even though I’ve smoked weed for most of my life and am pretty proud of my ability to handle my shit, I was glad to know I wasn’t alone in my feeling of being overpowered by this unassuming pre-roll.

“Those with high tolerances looking for a psychedelic high with a powerful punch will love it.”

When I get “too-high” on certain sativas, I’ve noticed that I experience auditory distortions. The cars passing on the street, the air conditioner above, and my friends talking next to me about esoteric instruments were all equally loud and creating a cacophony in my head. Even though I was in a generally quiet and serene back patio, it sounded louder to me than a rock concert. It’s a bit like the distorted throbbing buzz of a whippet that makes one minute feel like thirty thousand. It’s probably the same sort of magic time that allowed Alice to wander through a million fantasies in Wonderland all in the time span of a short nap in Real-land.

Once I got home and a few hours passed, the high faded into a more comfortable and classically bubbly stoned feeling. But it’s definitely a smoke more suited to chilling at home than to getting stuff done, unless the thing on your to-do list is having an existential crisis. People who enjoy strong strains that knock you on your ass will likely be fans of this. Those with high tolerances looking for a psychedelic high with a powerful punch will love it. I recently cut back on my smoking, so perhaps my tolerance got too low to handle such a potent smoke. This one is definitely not for the faint of heart, but probably perfect for a Queen of them.

Be the first to review Jenny Lewis Rabbit Hole from Glass House Farms and help others find their high.