This potent pre-roll is infused with premium flower and solventless concentrate that's ready to take you on a ride. The head high is present, and the body high will put you down, making it a solid post-work or weekend option when the only thing left to check off of your list is checking out. Reach for this for brainstorming sessions where you can allow your mind to roam free, or a self-care Saturday where you can just go with the flow and see where the high goes.

Ranked 70 of 173 in Pre-Rolls for feeling Relaxed. 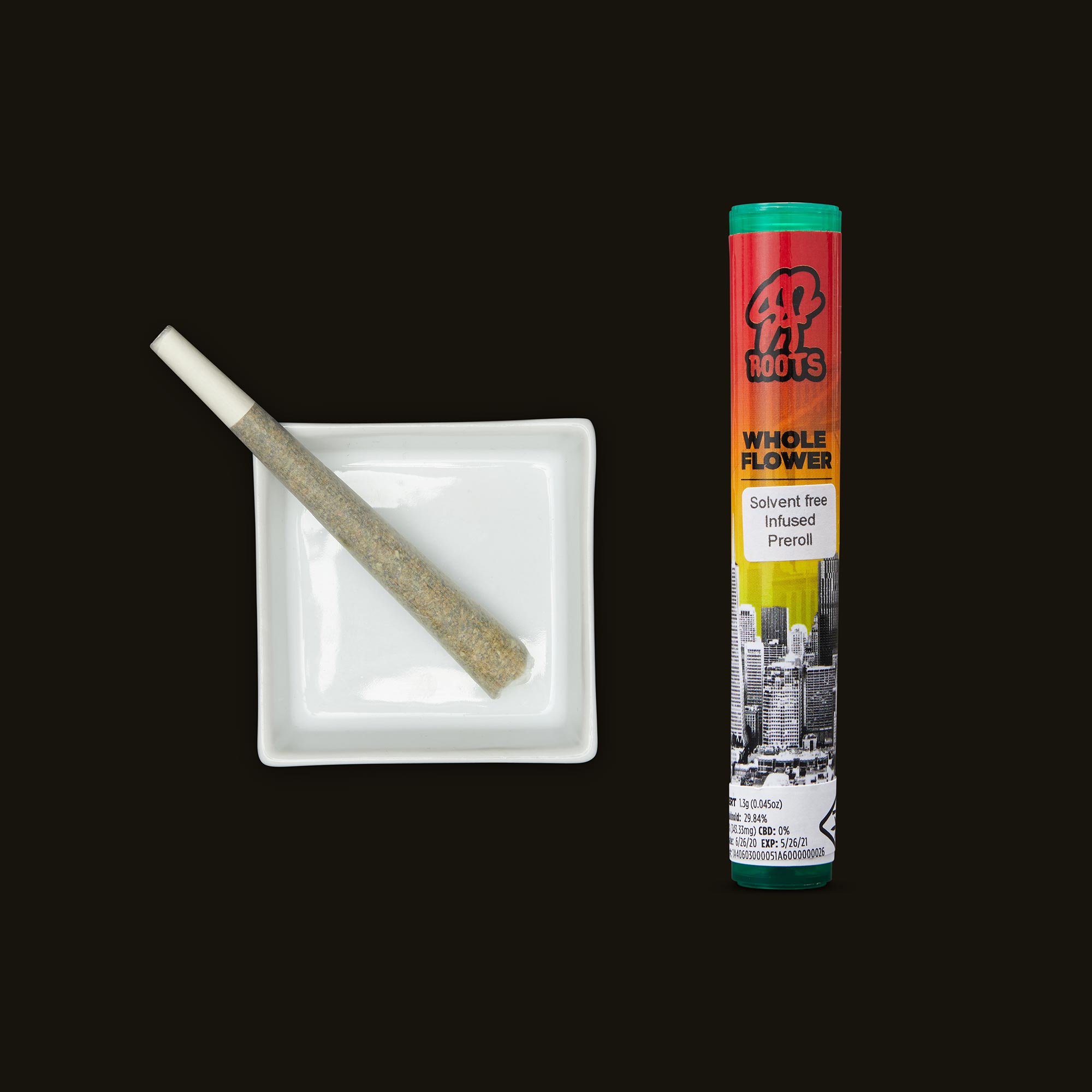 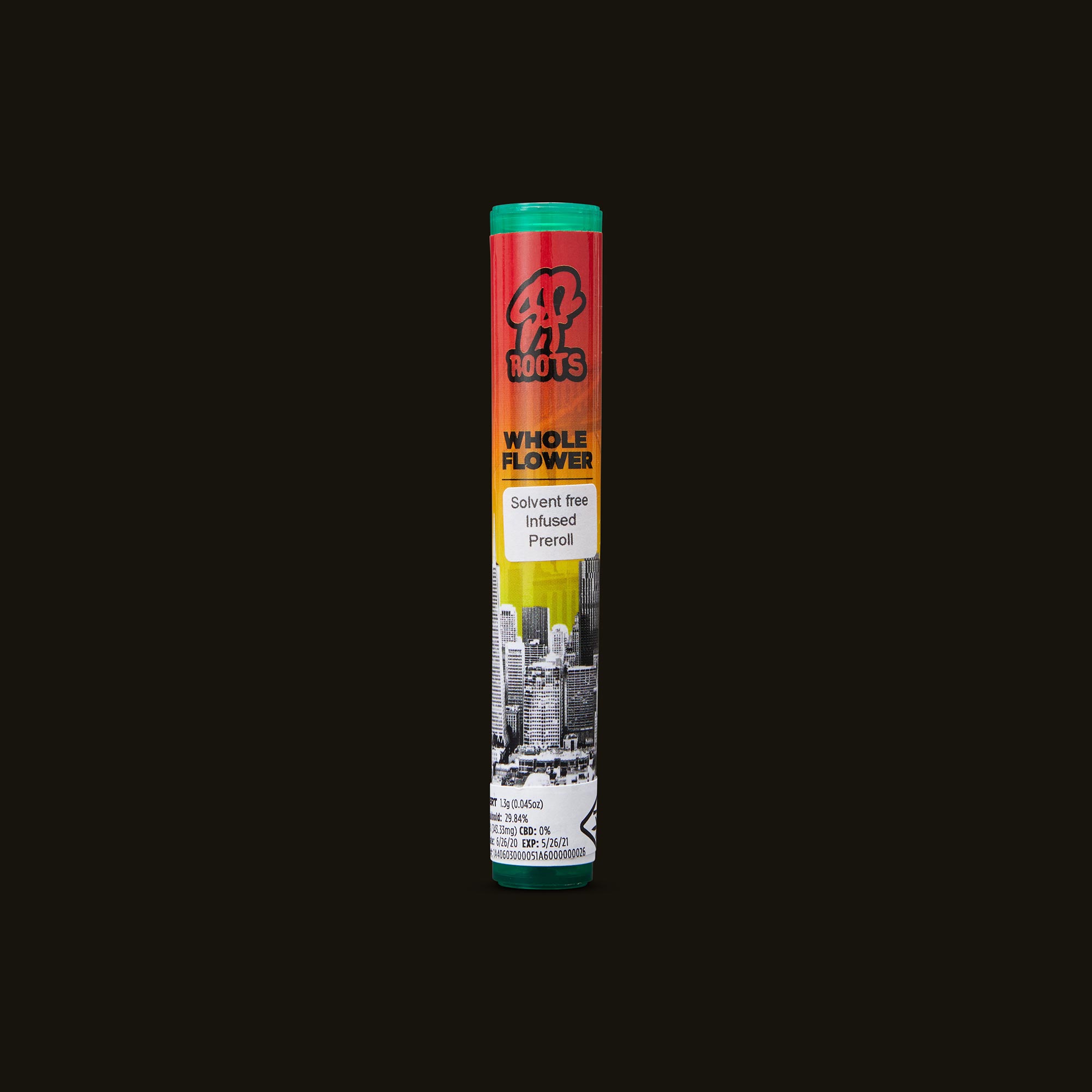 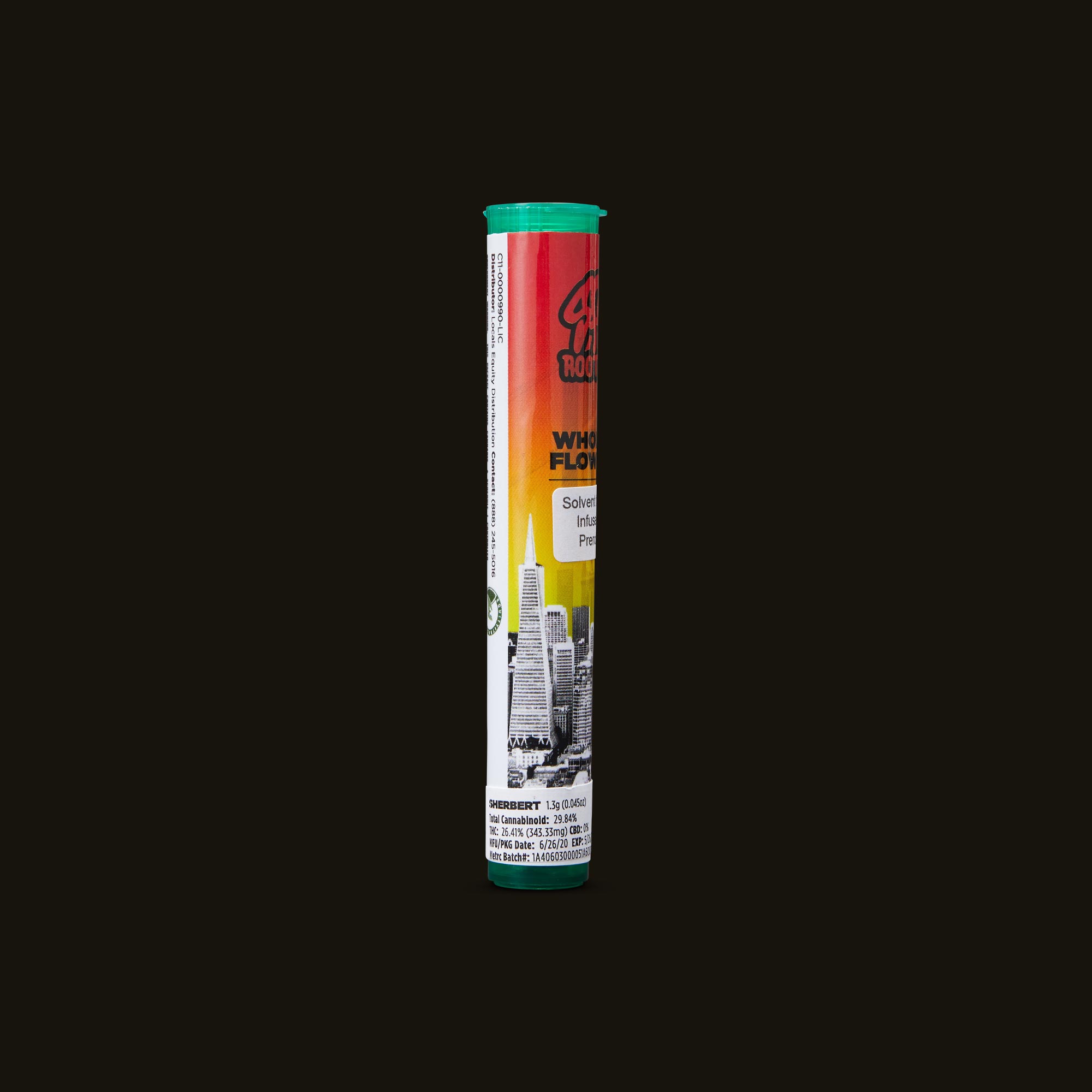 As our committee rates Sherbert Infused Pre-Roll, we capture their experience in real time through our ratings app and report everything back here.

Ranked 70 of 173 in Pre-Rolls for feeling Relaxed.

A very relaxing high that has me deeply entrenched within my couch. It made me hungry too so I’m currently eating Chinese food.

IN REVIEW: Don’t let the innocent name fool you, this pre-roll doesn’t pull any punches. Expect sweet notes of citrus and smooth pulls to lead you to an exhilarating experience. Take a puff or two to leave yourself high and happy without a care in the world, or take down the whole joint to lose yourself in the depths of your own mind. Whatever you choose, this pre-roll will stop you in your tracks and force you to reflect and relax.

This one gram pre-roll by SF Roots took me deep into the forest. Rarely have I been so thoroughly transported by a joint than I was with this Sherbert flower. At its peak, this high gave me the sensation I was tethered to the mast of a sail going in the direction of a mighty wind. I was about as free as one is apt to be on good old-fashioned reefer. Or at least that was the case for me.

This was a flavorful and vibrant smelling pre-roll that gave off notes of sweet citrus and hit with minimal harshness. The pleasantness of it all belied its true nature, which can be both profound and exhilarating. Upon initially smoking this joint, I was shamed into putting it out prematurely. I sparked it up while taking the dog for a walk, and some nearby pedestrians did one of those artificial coughs that politely informed me that my nightly reefer ritual was not appreciated. So I went on my way into the warm night air and was soon overtaken with a penetrating sense of positivity. This was only after a few tokes mind you.

“Whatever I was stressing about previously now seemed absurd. ”

The effects were of a joyful and surprisingly focused variety. Whatever I was stressing about previously now seemed absurd. This Sherbert joint just gave me the ability to laugh at myself and not get so invested in my thoughts. It was like being locked inside a windowless room filled with people arguing, and then you suddenly discover a hidden latch that gently lifts the roof off the foundation. The light that pours in quiets everyone and all is good again. That is a fair representation of how this euphoric dynamo of an indica flower struck me. Then I got home, smoked the rest of the joint and it was game over. I’d crossed the rubicon.

I suppose it was because I was so overcome with giddiness and self-love from my initial few hits of the pre-roll that I went bigger than normal and just finished off the joint in one madcapped second session. If your tolerance is low or middle of the road like mine, you may want to stick to a few tokes for a dutiful buzz. If, however, you like to test your mettle or just have an insatiable appetite for THC horsepower—the full Magilla should set you off on a memorable ride. I was almost instantly zooted.

“At peak high, I found myself outstretched on my yoga mat in a dark bedroom with lit candles and an essential oil diffuser chugging along like the Little Engine that Could.”

Deep breaths seemed to stretch for miles, and the body only appeared to me in waves of electricity rather than a connected form of any real significance. Someone had barnstormed my brain and poured space shuttle gasoline on my way of thinking. It was vaguely the stuff of dreams because somewhere there was a faint whisper that was asking, “Where are these notions even coming from? When have I ever encountered such a scenario in my waking life?” Then I began to get really jazzed about the unknown, and with every breath I took this high allowed me to fall further towards that endless abyss of potential.

At peak high, I found myself outstretched on my yoga mat in a dark bedroom with lit candles and an essential oil diffuser chugging along like the Little Engine that Could. It became important to me to fully embrace this high, so I had life momentarily hold my calls. I was going to even go that extra mile and light up some incense, but I thought that my place was already beginning to look like a crime scene of serenity. Better stop while the getting is good.

Closing my eyes and really reveling in this experience was like being shot into a deeper part of your own subconscious, and to your utter delight, you see that it’s firing at a totally different tempo. There were moments where I felt like this high was my version of Jacob Marley, and it began to organize this cavalcade of insights that helped me see life-defining moments in a different light, thereby teaching me lessons for the future. I became filled with such notions. Sometimes you just want to get high and check out, and believe me, this bud will do that for you, no question. Other times you decide to go down a different path and just try to figure stuff out while properly baked. This will also do that for you if you want it to.

At first toke, this Sherbert pre-roll from SF Roots was a potent and joy-inducing high that soon became much more. It turned into an outright experience by flooding the system with a steady stream of positive energy. It was the whole Willy Wonka experience of awe, euphoria, and childlike wonder, but this is one chocolate river ride that can take you into some scary depths when not given the respect it deserves.

Be the first to review Sherbert Infused Pre-Roll from SF Roots and help others find their high.