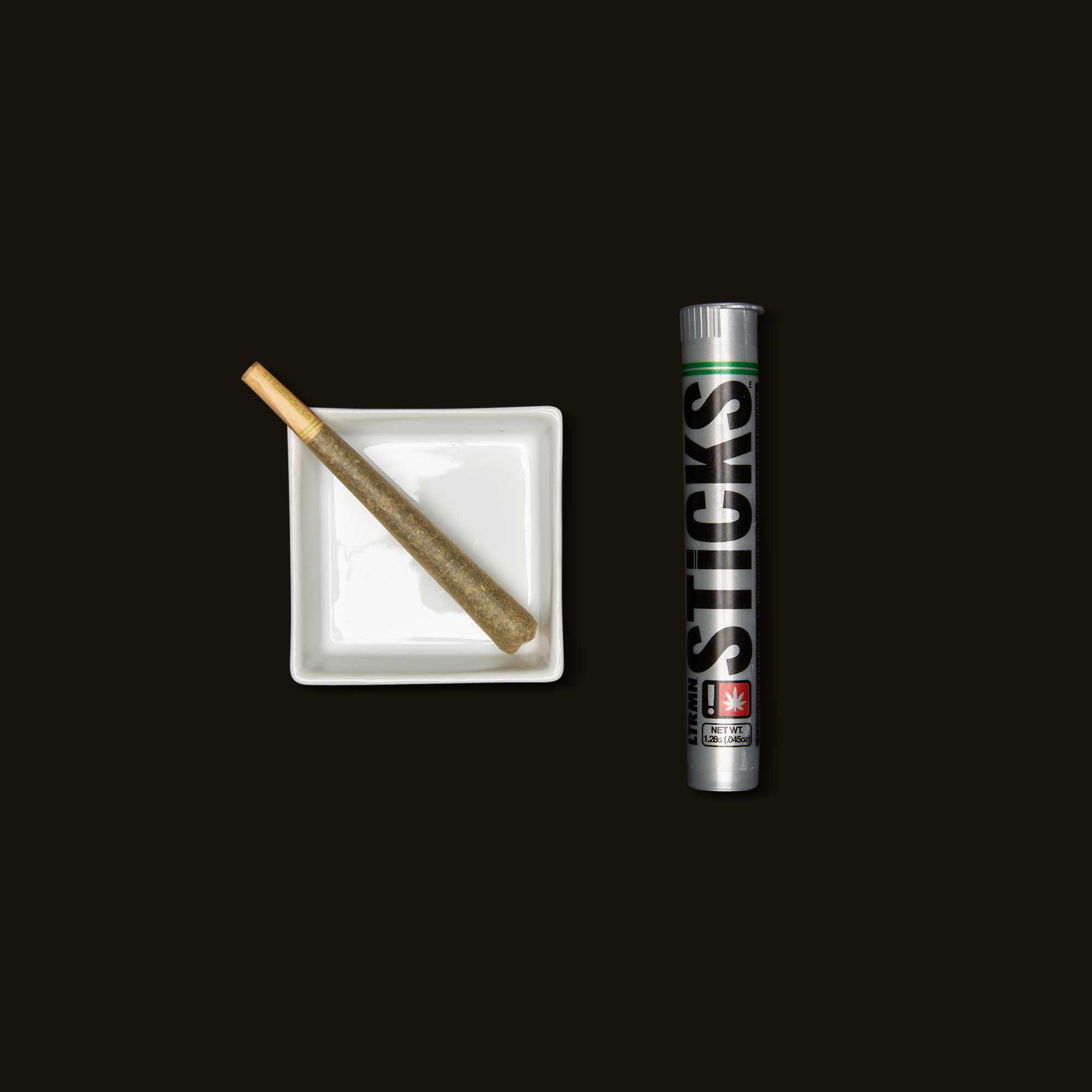 Sticks' Sour Banana Sherbert Pre-Roll has an earthy flavor and a skunky aroma. The resulting high is often uplifting and balanced, so it's a nice choice for an early morning kickstart. The high is often light and airy without a distracting head haze, and it pairs well with happy hour or a first date because of its social buzz. Just watch what you're drinking. Not all booze does well with this high.

As our committee rates Sour Banana Sherbert Pre-Roll, we capture their experience in real time through our ratings app and report everything back here.

This Productive Pre-Roll Does Not Play Well With Others

On its own, this pre-roll was a Disney fantasy. Mixed with vodka, it turned into a 1984 horror movie.

I did two blind testings of Sticks’ Sour Banana Sherbet pre-roll. They could not have been more divergent. During my first round, I felt like Snow White on the first day of spring, whistling at birds and baking bread in an apron. My smile was too large, eyes too sparkly, creativity too abundant, and productivity too cute. During the second round, I was butt-naked on my living room floor, puke in my hair and all over my Ikea shag rug, looking like that one girl gremlin.

“The body high complimented the head high by keeping my body light and bouncy but not jittery and excited.”

Let me back up a bit. Sour Banana Sherbet is a hybrid of AJ’s Sour Diesel and Banana Sherbet, a faintly sour, earthy, but comfortable lungful of smoke. At 22% THC, I anticipated a manageable amount of intoxication. And since this pre-roll packed a full gram of weed, I knew a few solid hits would be plenty enough for me to evaluate the high. I shouldn’t fail to mention how badly I wanted that first hit to taste like fresh banana. I even thought, “Damn, this would be the perfect smoke if it actually tasted like bananas.”

The onset was cerebral. My first indication I was high was when I began creating multiple, super comprehensive to-do lists in my mind while making tea, watering plants, setting up my workstation, and clearing breakfast dishes. The body high complimented the head high by keeping my body light and bouncy but not jittery and excited. My resting mood was relaxed but motivated, and the high piggybacked off those vibes. Birds were literally chirping sweet songs outside my window as I flitted around the kitchen on some Disney princess flex.

Once I settled into my workspace, the creativity flowed. After a few days of soft writer's block, this high was a welcome release. It never put me in the wheelhouse of intoxication; I was chill but also alert and engaged. I worked with clearheaded attention to detail that I get from only a handful of products—rarely flower. I comfortably beat my keyboard for the better part of two hours before the crystal-clear focus that was so prevalent at the onset began to decline. And that felt like a superb run time.

I was convinced. This would become a product I would enthusiastically recommend. It had calm focus, bubby creativity, joy—it felt to me like a very specific type of high. A weekday morning, work-from-home, gaze over a blooming garden type of high. An I-get-stuff-done, but-not-in-a-braggy-way type of high. I enjoyed this high for all the right reasons, but I neglected to check a crucial box before I decided how much I loved it: Does It Play Well with Others?

The answer is no. No, it does not play well with others.

My second session with this Sour Banana Sherbet pre-roll started innocuously enough. I had just arrived home from cocktails with my lady pals, still very much upright and ready to eat some snacks and catch up on some trash TV. Before I lit up round two, I made myself a cup of tea and evaluated my snack cupboard. Uninspired, I decided this was the perfect time to hit the joint again, maybe it would inspire some creative munching. I took two, maybe three hits and made my way back to the kitchen ready to invent some new type of nacho or build an impossible sandwich.

This is the ritual. I meet a few friends for drinks. I sip in moderation and I'm home by 11. Once I'm home, I drink herbal tea, get hella stoned, eat weird nachos, and watch trash TV. The only variable each week is the weed I smoke at the end of the night.

“There was no reason for me to feel so ruined, so incapacitated.”

So I was surprised, to say the least, when a wave of nausea sent me out of the kitchen and onto the couch. I was locked in. I began to retrace my steps. Did I leave my drink alone? Were the taps dirty? Was the cranberry juice bad? There was nothing overzealous about my cocktailing earlier in the evening; I had three drinks over the course of three hours, a sensible dinner, plenty of water, and a cup of herbal tea as soon as I got back home. There was no reason for me to feel so ruined, so incapacitated. My stomach roiled like a nightmare roller coaster as I carefully stripped out of my fancy lady clothes and wrapped myself in blankets. I nestled into a corner of the couch and resolved to doze this episode away.

45 minutes later, having not dozed at all, and instead becoming sucked in an infinite centrifuge of my own worst thoughts, I catapulted off the couch with a mouthful of vomit. I became a barf volcano. It was…. so gross. In the matter of two sessions with this pre-roll, I went from a Disney fantasy to Greta the girl gremlin. Everybody remembers the girl gremlin, right? That was me. I was Snow White until Sour Banana Sherbet and vodka after dark turned me into a vomiting gremlin.

The bottom line is this: if only to err on the side of caution, keep this particular stick to itself. Use it during your most wakeful, productive, sing-songiest hours and feel the fairytale fantasy, but don't feed it alcohol or it will turn in you into a gremlin.