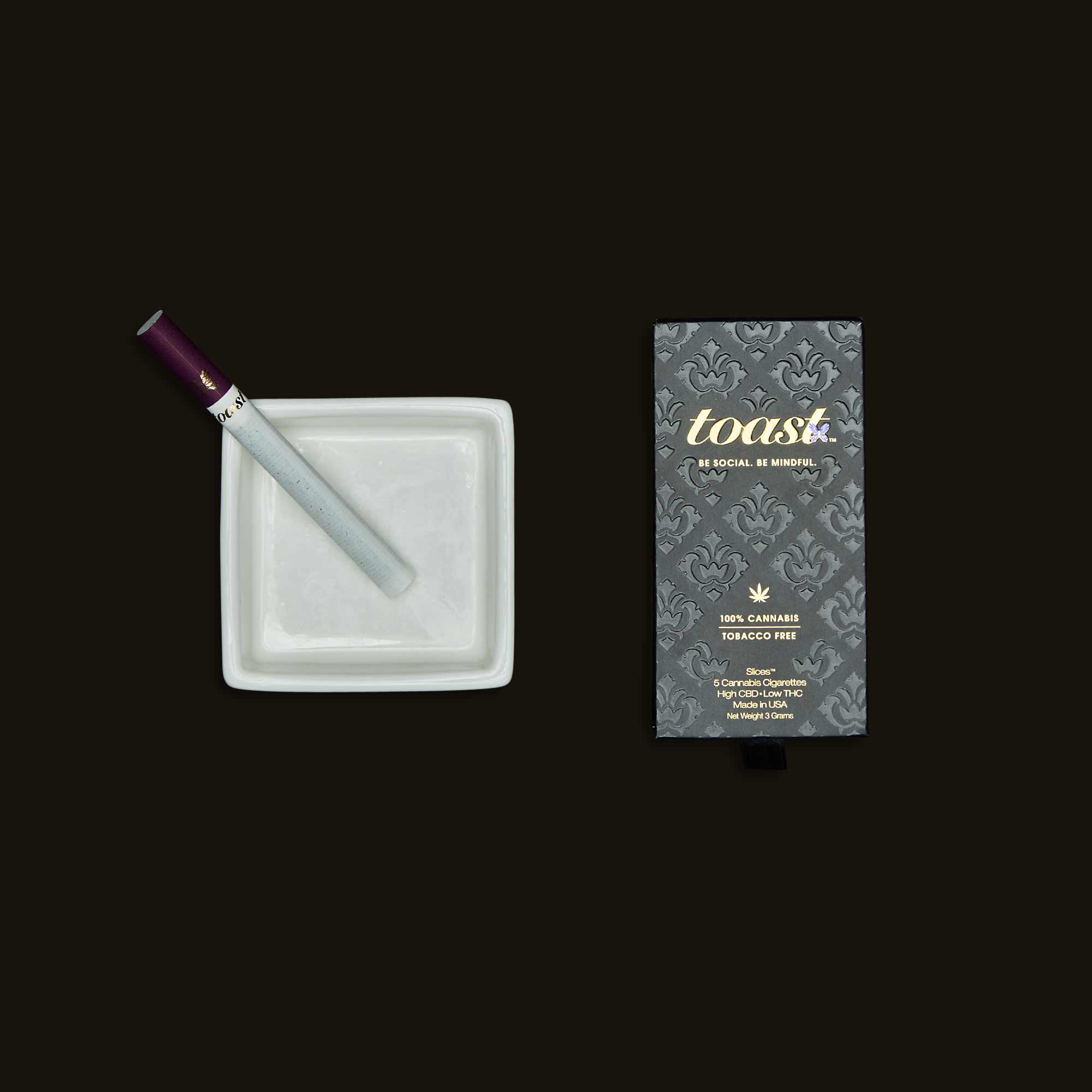 Toast's Pre-Roll Pack is loaded with cigarette-style joints with special filters, elegant packaging, and sleek design, but the weed gets lost in the sanitized paper taste. The high should feel calm and soothing, but it can cause dry mouth. If you're a long time smoker trying to quit, these might provide some serious benefits.

Ranked 1 of 1 in Pre-Rolls for feeling . 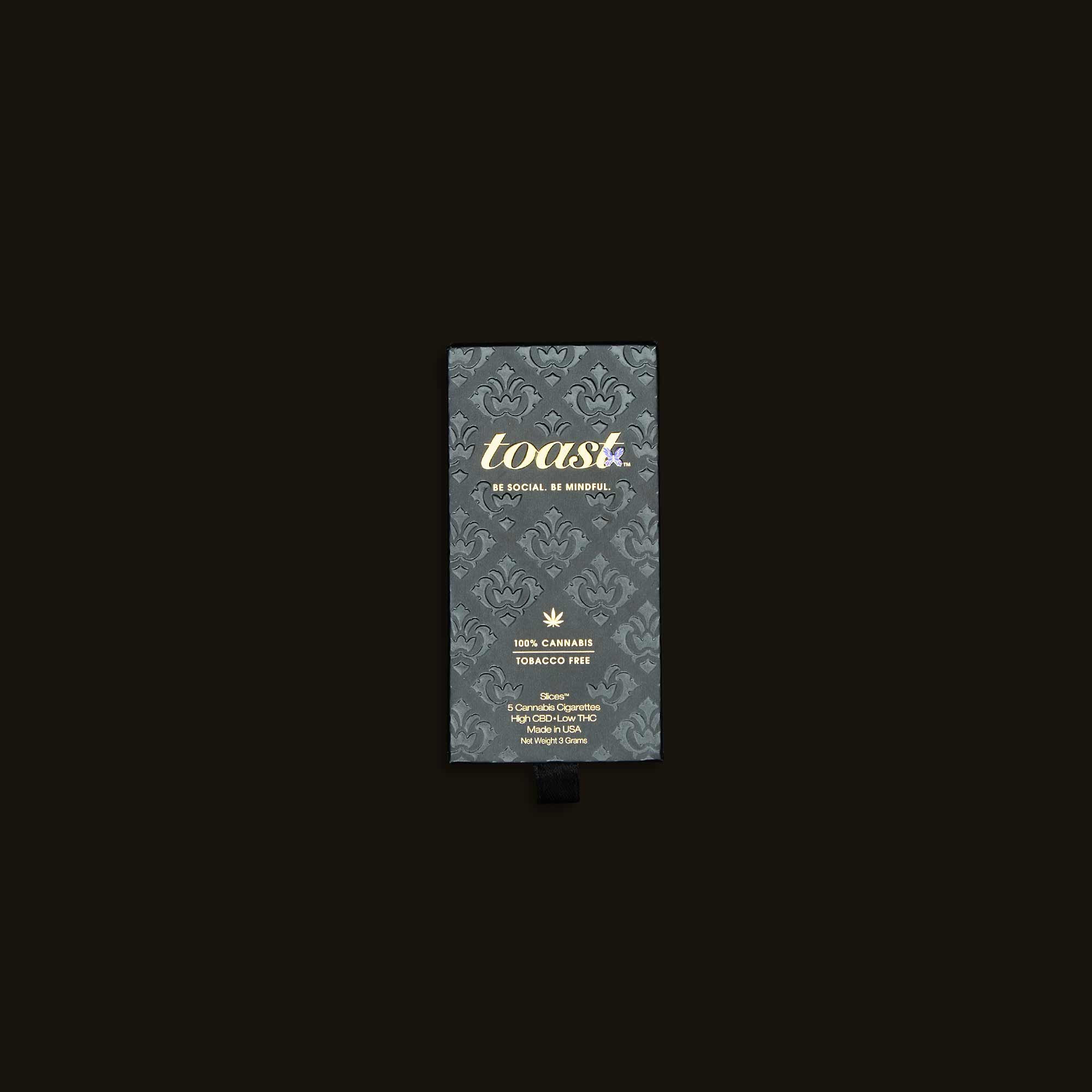 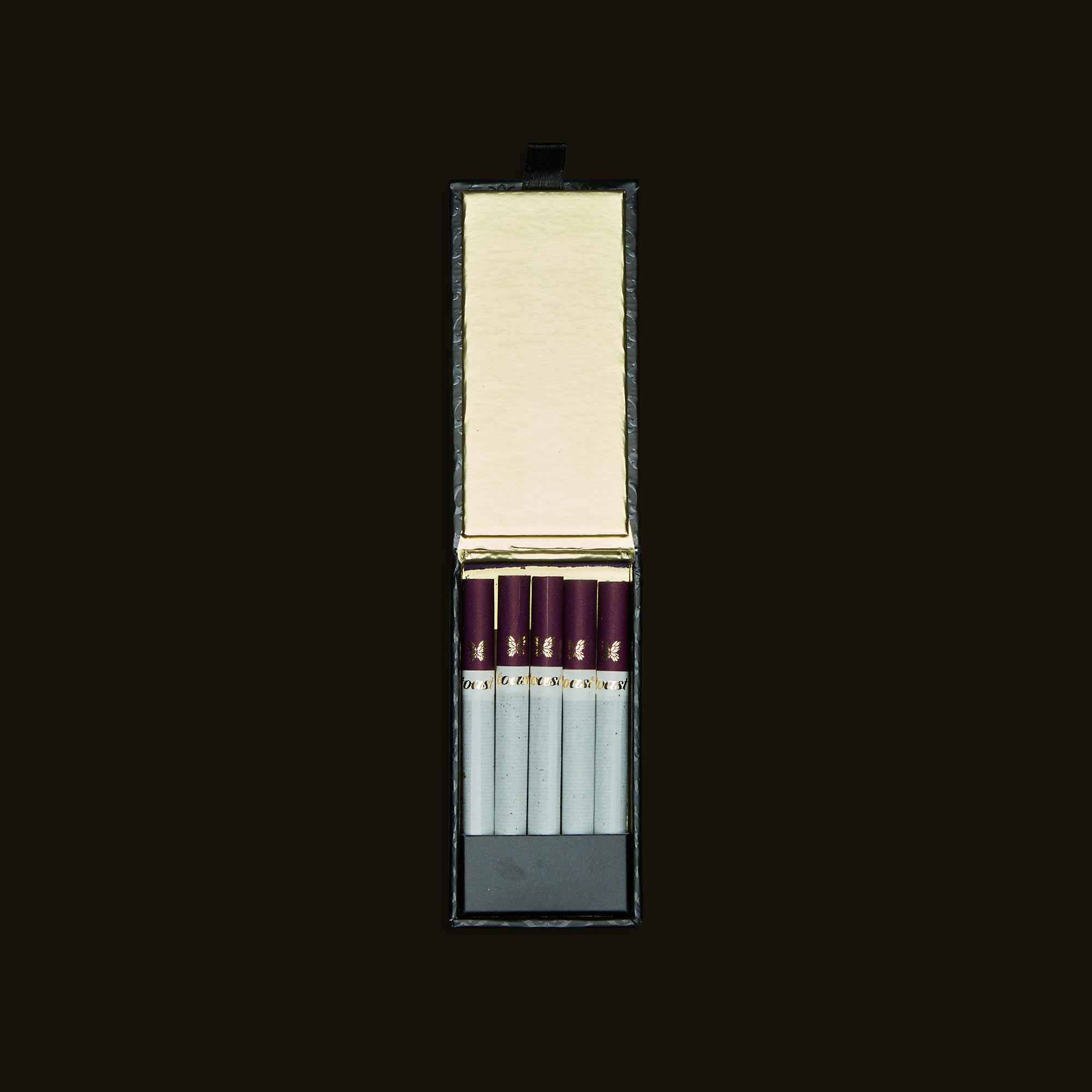 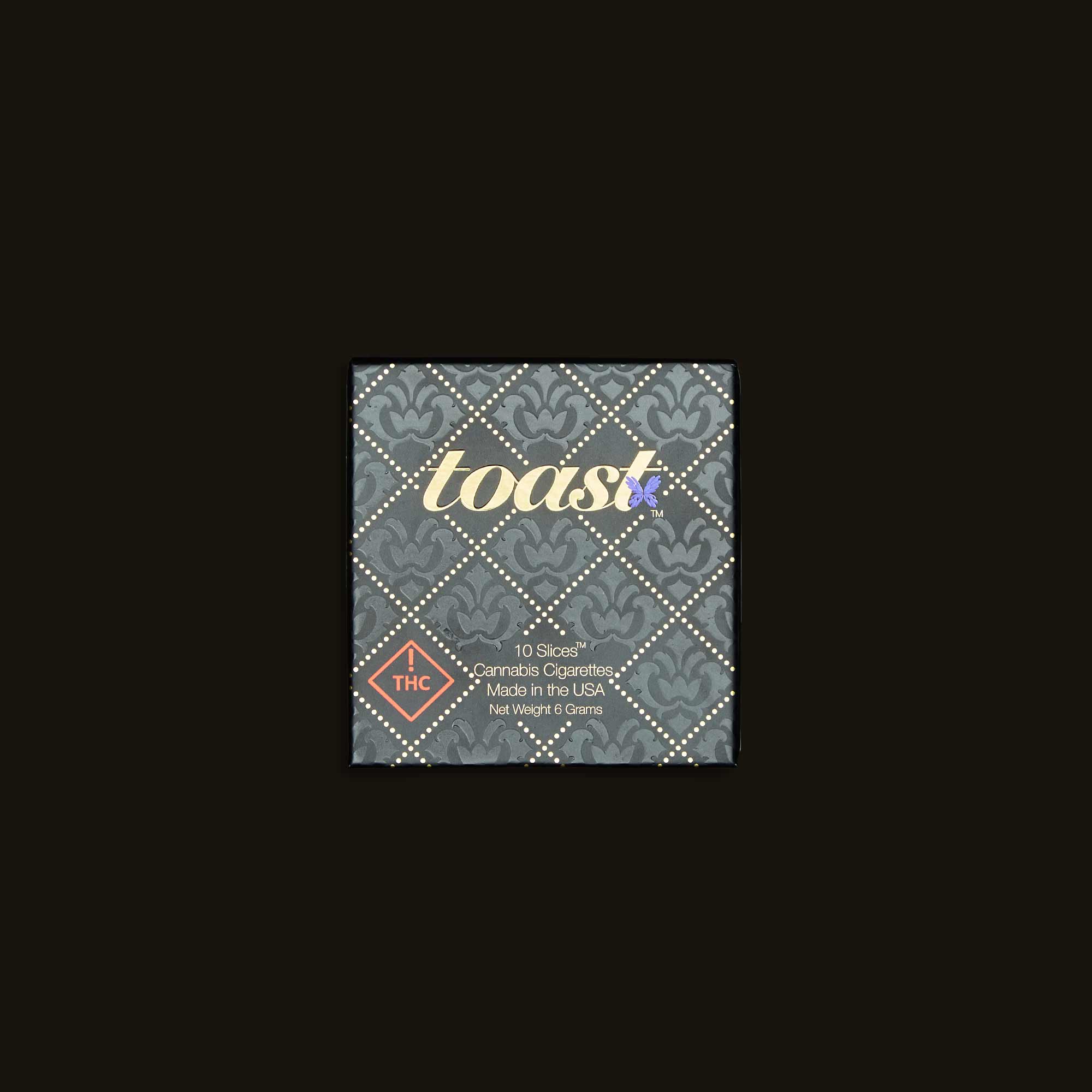 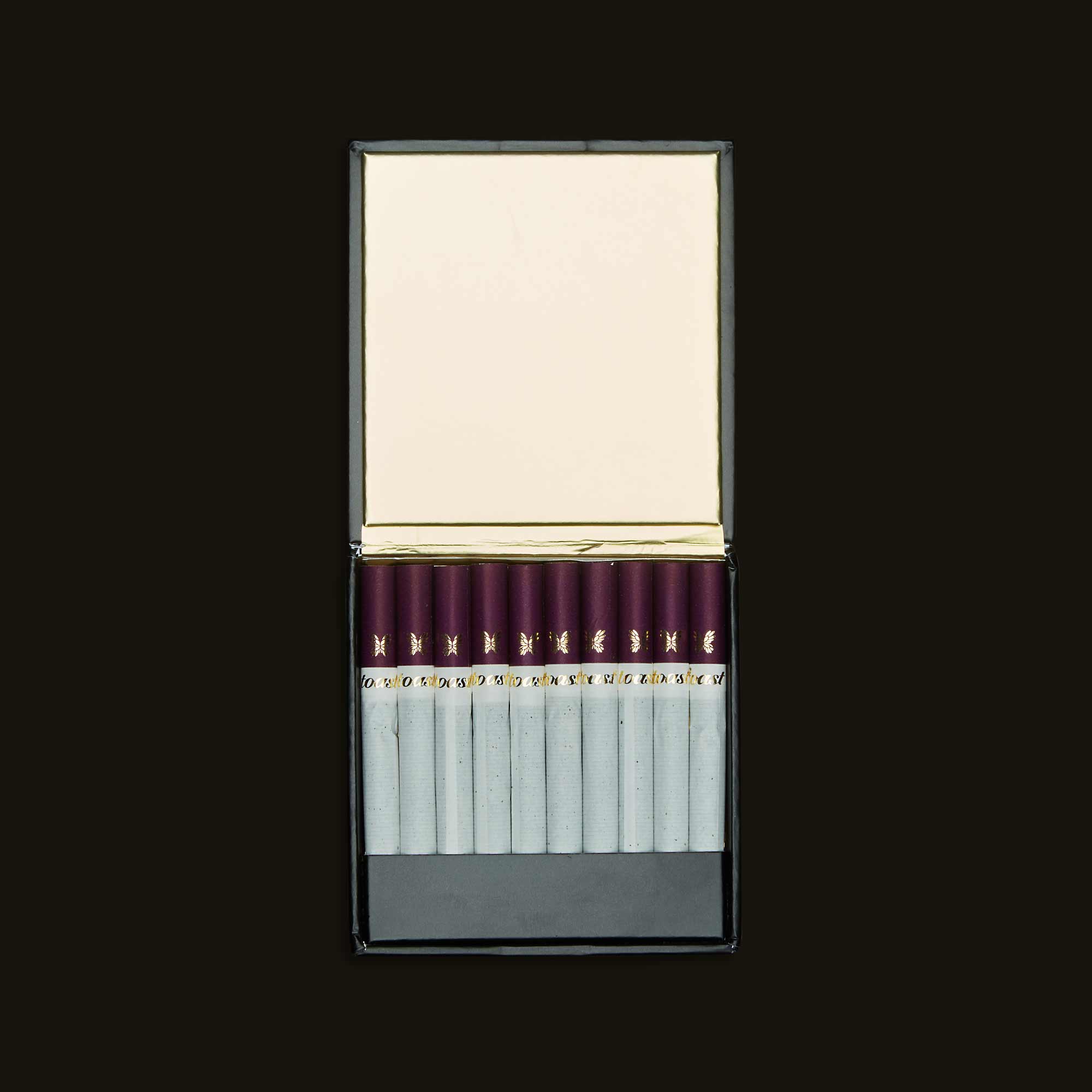 As our committee rates Pre-Roll Pack, we capture their experience in real time through our ratings app and report everything back here.

Ranked 1 of 1 in Pre-Rolls for feeling .

A Cannabis Cigarette That’s All Sizzle And No Steak

They're as chic and professional as they come. That's partly the problem.

“It’s toasted.” As I recently lit up one of Toast’s cannabis cigarettes, I couldn’t help but think about this now-iconic line from the premiere episode of the hit TV series Mad Men. It’s the swanky advertising slogan that series star Don Draper comes up with off the cuff to impress his ad firm’s biggest client, Lucky Strike cigarettes. It’s also one that introduced viewers everywhere to the slick yet troubled world of the 1960s advertising industry.

The name Toast surely helped trigger this memory, and I wonder if the pre-roll’s creators thought of the episode when they first came up with the name. But that’s not the only reason I played the scene over and over in my head as I smoked. Mad Men, after all, is all about image and style, about outsized ambitions at a time when America still seemed limitless and grand. As Don Draper tells the Lucky Strike executives in the first episode, “Advertising is based on one thing: Happiness. It’s freedom from fear. It’s a billboard on the side of the road that screams with reassurance that whatever you are doing, it’s okay. You are okay.”

“Between their crisp, factory-rolled straights and the gold and violet accents, they’re meant to make you feel not only okay but cool as hell.”

And that’s what Toast cannabis cigarettes scream. Between their crisp, factory-rolled straights and the gold and violet accents, they’re meant to make you feel not only okay but cool as hell. This isn’t some shaggy hand-rolled spliff, friends. This is a joint that’s as chic and professional as they come.

When I tried my first Toast cigarette at a classy open-air cannabis pairing dinner last summer, the product felt like something special. The elegant smokes, which come in a tasteful magnetized box of ten cigarettes or “slices,” fit right in among the well-attired crowd sipping wine and listening to live music under the wide Colorado sky. Of all the schwag I received at the event, the Toast cigarettes were the first thing I showed off when I got home. Here was something new and unique, a treasure that harkened back to an earlier, romantic era, a remnant of 1920s speakeasies or 1960s Madison Avenue.

Alas, our glossy, golden fantasy of the past is a fantasy for a reason. When I recently tried Toast a second time—by myself and in my backyard—all that magic was gone. The filtered cigarette delivered one of the smoothest smokes I’ve ever experienced, but other than that? It was like smoking an old-fashioned cigarette—and not a good one at that. The joint had almost no aroma, and the accompanying flavor was bland, piney, and somewhat stale. The effects were similarly insipid: an extremely mild, slightly energized high that wore off within the hour.

Such moderate effects are apparently to be expected with these high-CBD, low-THC joints. As Toast notes on its website, each slice will “activate your mind and relax your body while keeping you in control.” But with each box of ten cigarettes selling for $85, you’d expect to get a little more bang for your buck—or at the very least a bit more flavor. Especially since cannabis consumers are becoming ever more sophisticated. Most will take one look at a high-gloss pre-roll product like Toast and wonder if it’s all sizzle and no steak, with its fancy packaging masking sub-par cannabis. Unfortunately from my experience, such suspicions might be warranted.

Maybe that’s why my first impression of Toast was different. In the right time and place, with enough distractions, these slick little numbers can seem great—just as long as you don’t stop to savor them. They’re an attention grabber, a prop, a perfectly rolled advertisement for something sexy and exciting that isn’t really there.

“Yes, Toast cigarettes don’t deliver all the really horrible stuff found in cigarettes, but that doesn’t make them great. ”

And that’s really why I thought of Mad Men when I recently smoked a Toast cigarette. The show is all about the illusion of happiness and the false promises of the ad world, with its characters forever chasing the idea of success and love and contentment while the world around them crumbles and burns. Even Don Draper, the Cyrano of cigarettes, eventually comes to disown Lucky Strike and everything the tobacco company represents. As he notes in a full-page ad that he publishes in the New York Times in a late-series episode where he declares his company will no longer work with cigarette companies: “For over twenty-five years we devoted ourselves to peddling a product for which good work is irrelevant, because people can’t stop themselves from buying it. A product that never improves, that causes illness, and makes people unhappy.”

That incident was supposed to take place in 1965. And yet, here we are, more than a half-century later, still trying to emulate all the bad parts of those “toasted” Lucky Strikes: a bland, unmemorable smoke, courtesy of a forgettable, factory-rolled cigarette. Yes, Toast cigarettes don’t deliver all the really horrible stuff found in cigarettes, but that doesn’t make them great. Toast left me yearning for one of those old-school, shaggy hand-rolled spiffs filled with funky aromas and odd flavors. Is that the sort of thing Don Draper would have consumed on the regular in his prime? Not likely—and that’s exactly the point.