Elite California’s Ritual GoodTime tincture has a flavor of cinnamon that helps the lift the sublingual flavor from your tongue after your dose. The result is uplifting and soothing, so consider laying under the stars and holding hands. Thrift shopping is also amplified by this high. This is perfect for swirling into a Christmas cocktail if you’re feeling brave.

Ranked 8 of 108 in Sublinguals for feeling Relaxed. 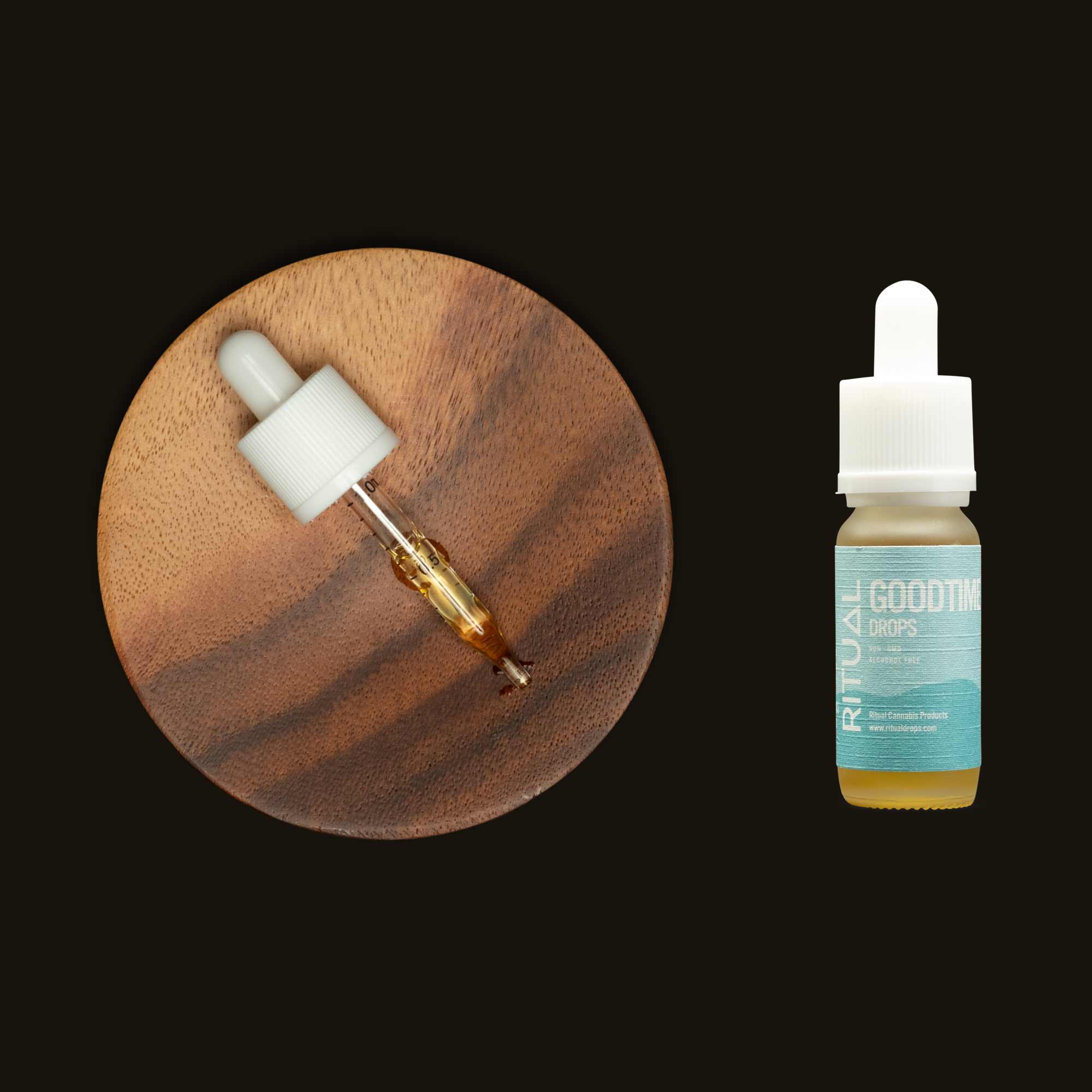 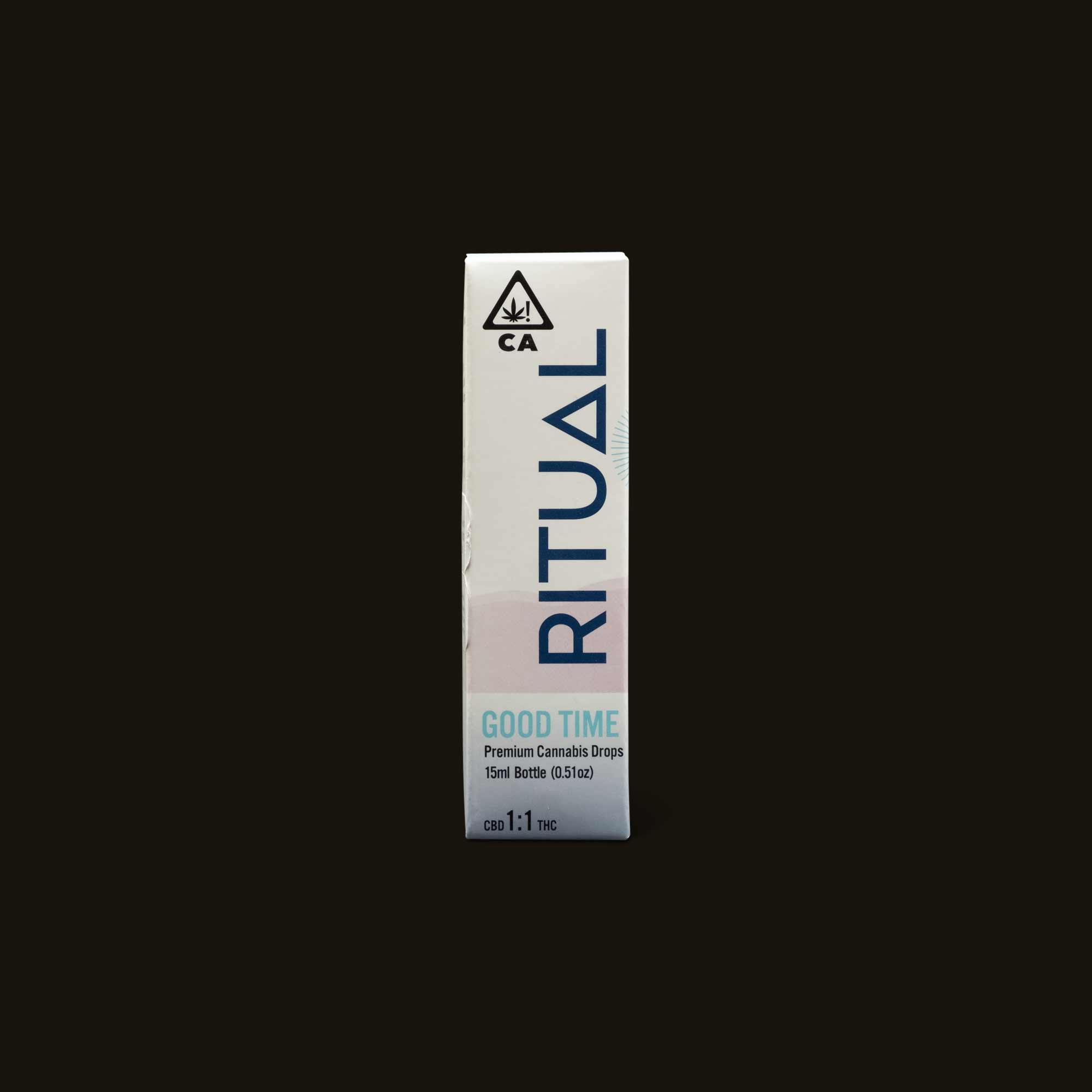 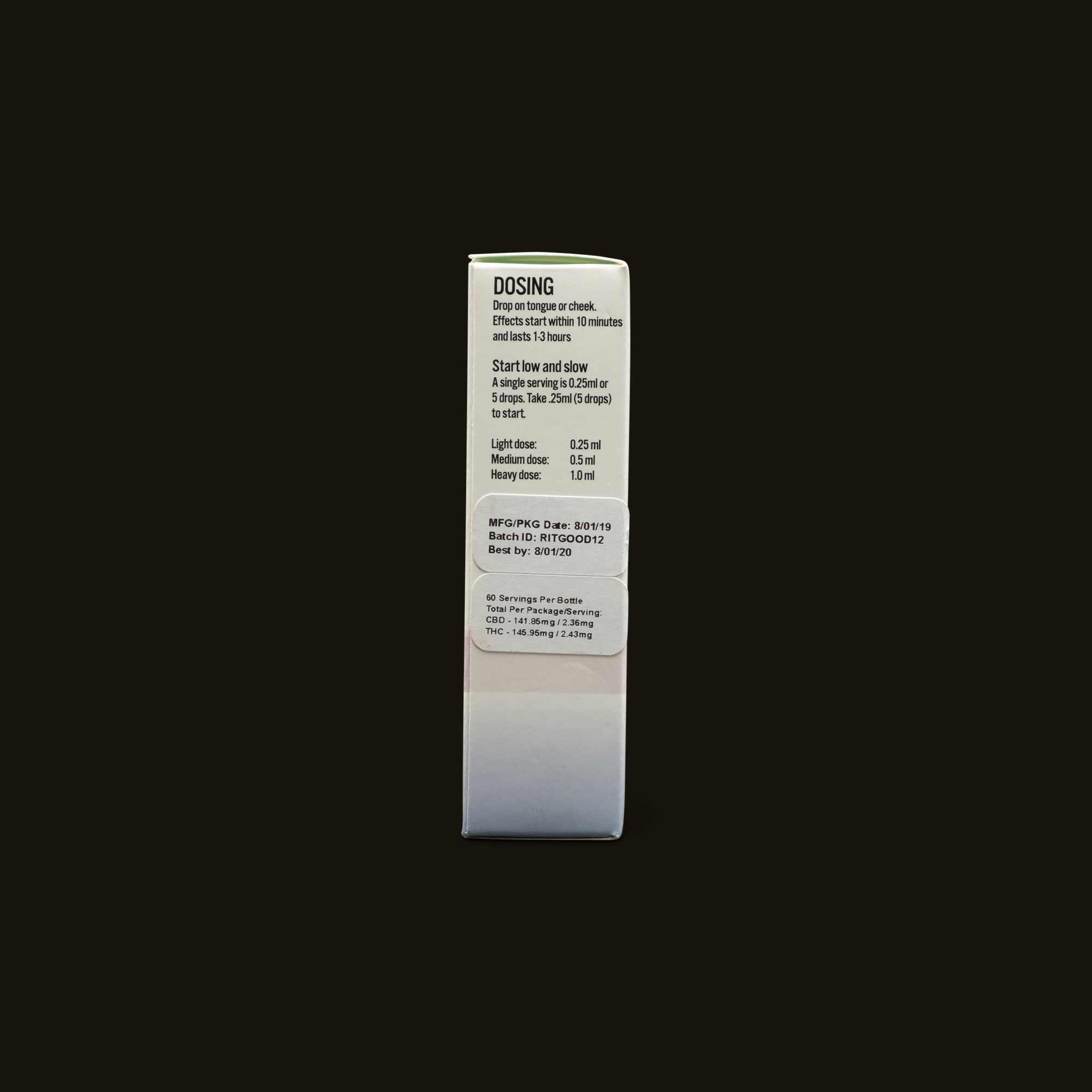 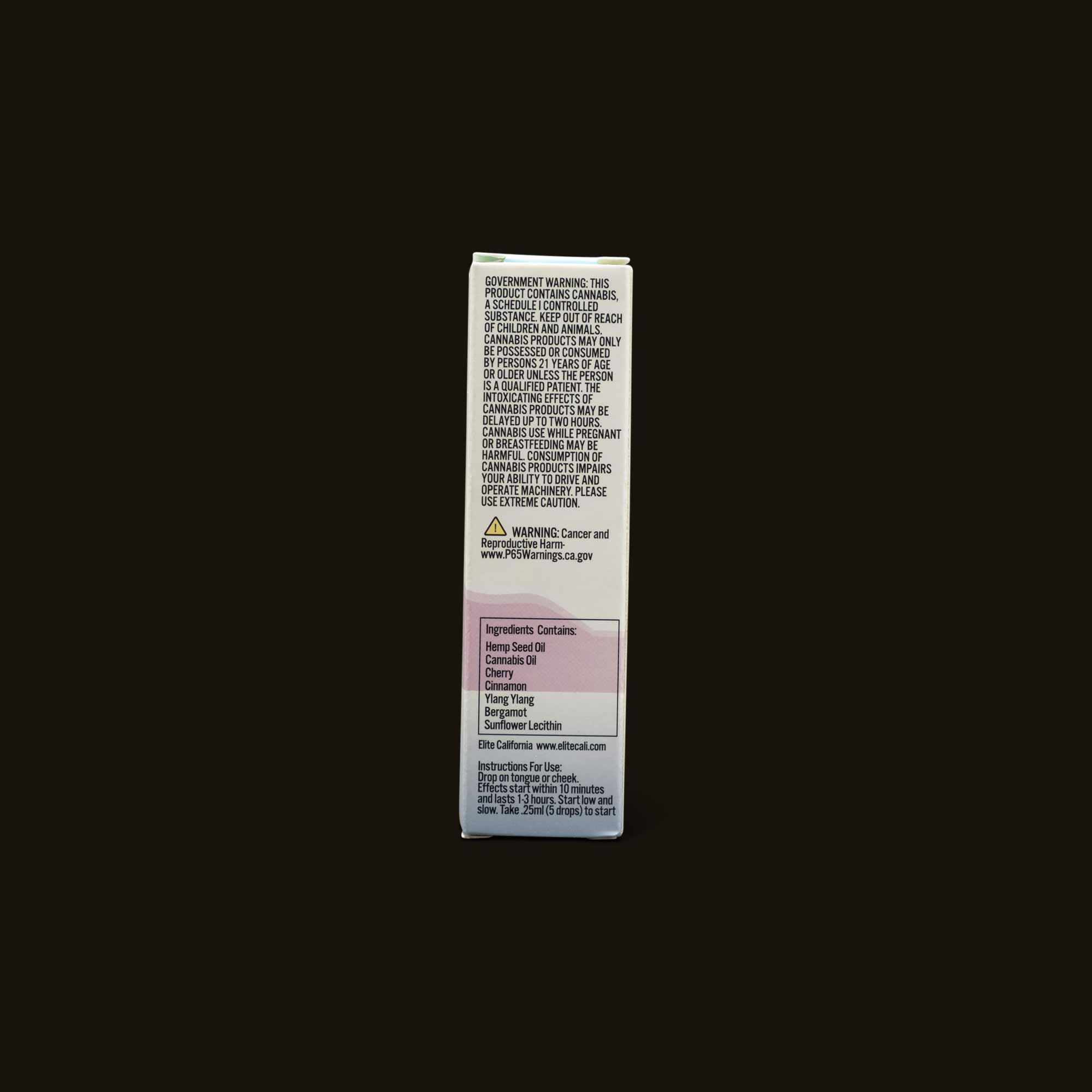 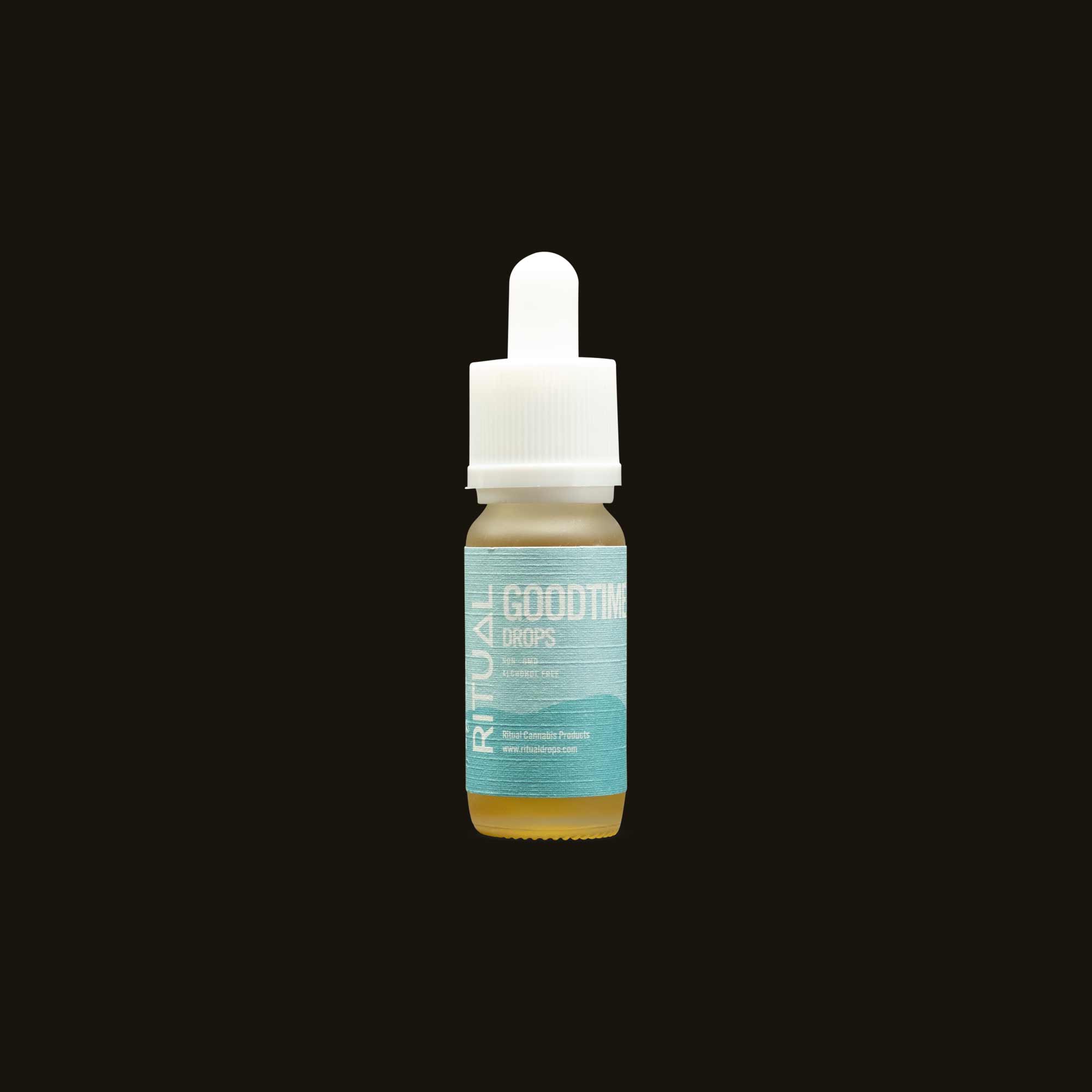 As our committee rates Ritual GoodTime, we capture their experience in real time through our ratings app and report everything back here.

Ranked 8 of 108 in Sublinguals for feeling Relaxed.

I Took This Bougie Tincture To A Monster Truck Rally

And all I got was the best time of my relatively young life.

On a summery Sunday afternoon, I headed to downtown Los Angeles to witness an epic battle of strength, perseverance, and charisma. With bright eyes and an open mind, I traipsed through the Staples Center's main concourse in search of tater tots and the time of my life. 24 hours earlier, I had no idea what a monster truck rally entailed. I pictured grey-bearded men with egos as big as their biker gangs and large-breasted women slinging overpriced koozies. Now, in the presence of bone-rattling engine revs and super-sized ads for Hot Wheels, I realized I’d grossly misjudged the situation. Bottling the enthusiasm of a One Direction concert with the promised violence of a gladiator fight, Monster Jam is an event with no comparison. And boy am I glad I was stoned as heck for it.

“You might not associate frosted glass bottles and essential oils with tires the size of hot tubs, but I do.”

But before I could become a Monster Jam evangelist, I had to grab some earplugs, cash for a corndog, and an exceptionally bougie cannabis-infused tincture by Ritual. You might not associate frosted glass bottles and essential oils with tires the size of hot tubs, but I do. The “Anytime” label on this particular tincture was a clue to me I should in fact feel free to use it any damn time I please. I could’ve brought the whole bottle with me and no one would’ve been the wiser, but I opted to squirt half a dropperful under my tongue before my girlfriend and I set off on our grand adventure. Thanks to an oil base, the potion managed to avoid burning the shit out of my mouth like alcohol-based tinctures tend to do. Touché, Ritual.

My girlfriend watched skeptically as I held the cinnamon-flavored tonic under my tongue a full fifteen seconds to kick off the effects sublingually. The last time I did this when she was around, I overdid it and calmly confessed my body was melting. This time around, however, I limited myself to a “medium dose,” which is described on the bottle as having 5mg of both THC and CBD. It’s the kind of combo that, when overdone, can make your body feel more liquid than you might like; but when done right, it can strike the perfect balance between relaxed body vibes and an uplifted head high. Proper Committee member Brianna Wheeler even calls the 1:1 THC to CBD ratio the macaroni and cheese of weedy combos.

There’s one other thing I want to shout out before we jump back into the monster truck scene: recognizable ingredients. This Anytime tincture just happens to have many of the wholesale essential oils I put on my face, which is oddly validating. Like, am I fancy or just smart? Because looking at ingredients like hemp seed oil, cinnamon, ylang ylang, and bergamot, you might assume it’s a $200 serum instead of an organic, non-GMO witch’s brew meant to get you lit. And I’m very much into it.

“I tossed my crotchety old man side to the wind.”

Anyway, we watched in awe as Megalodon, a six-ton truck in the shape of an ancient shark, barreled over dirt mounds and bounced into a handstand on its front two tires. Watching trucks of this size do donuts, jumps, and backflips kind of feels like watching elephants do gymnastics in one giant live-action ad. There’s an artistry to these over-the-top stunts that’s truly mesmerizing to behold—though I have a feeling the weed coursing through my veins also had something to do with it. Stealing sips of beer and eating concession-stand tater tots out of a cardboard box took me right back to the endless summer days of my youth. Some crew members hauled two junkyard cars painted bright blue into the arena like the scientists in Jurassic Park hauled out a goat for T. Rex, and that’s when the crowd lost it. Those cars were crushed in a total of ten minutes and I screamed along with everyone else as a souped-up hearse named Grave Digger made pancakes out of their metal shells. I was feeling it, y’all.

I will say it took me a solid hour to realize half of the audience was under 12 years old. (Then again, I didn’t realize Call Me By Your Name was set in the ‘80s until halfway through the movie even though there’s a subtitle at the beginning that reads, Somewhere in Italy, 1983.) When my surroundings did come into focus, a mild cold sweat came on at the thought of navigating a traffic jam of toddlers at the show’s end. Now, normally the thought of hanging out at a stadium full of pre-teens for three hours would send me into a panic, but with the balanced blend of THC to CBD, I tossed my crotchety old man side to the wind. From the beginning of the show to its harrowing end, I felt like a brighter, better version of myself, like I too had a vastly superior hydraulic system than the average four-wheeler.

Before I knew it, Megalodon was crowned the king shit of Monster Jam mountain and we set our sights on rooftop cocktails. Outside, the fresh air brought me back to life as my eyes adjusted to natural light. It occurred to me I completely forgot I was high, which is sometimes the best high of all. Point being: If you’re looking for carefree Sunday afternoon vibes in a bottle, I’d highly suggest this tincture. If you’re into edibles but looking for something a little cleaner and faster-acting than a cookie, get yourself a bottle STAT. I know I’ll be reaching for it next time I feel like doing anything, anytime.

Be the first to review Ritual GoodTime from Elite California and help others find their high.