Kin Slips' Cloud Buster Microdose is a milder method of getting high. These sublingual strips contain half the THC of the Cloud Buster Standard, so experienced cannabis users should reach for the strong stuff instead. Lower tolerances can expect a creative buzz in the brain and a faint but soothing body high. It's a good option for honing in on your workflow.

Ranked 11 of 33 in Sublinguals for feeling Euphoric. 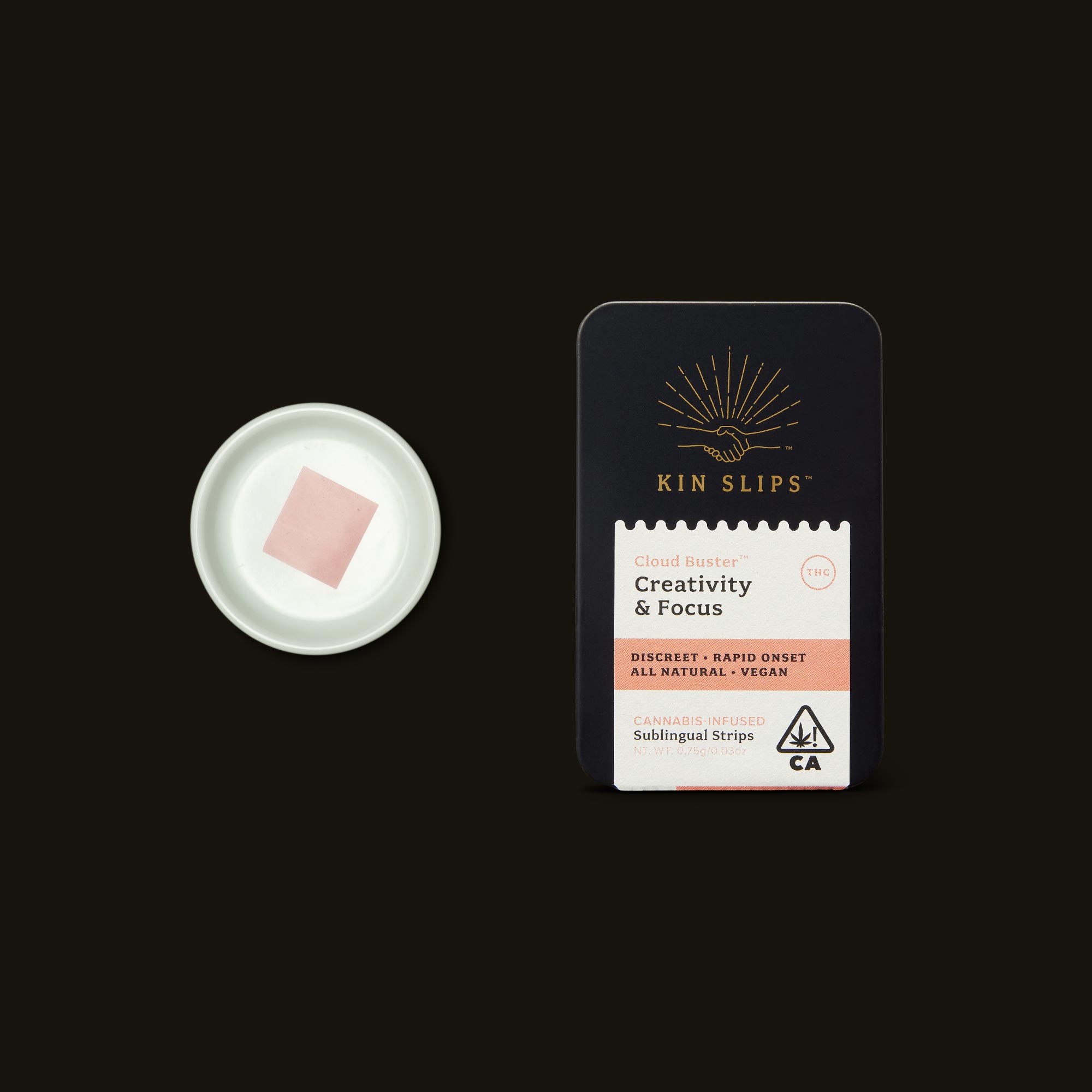 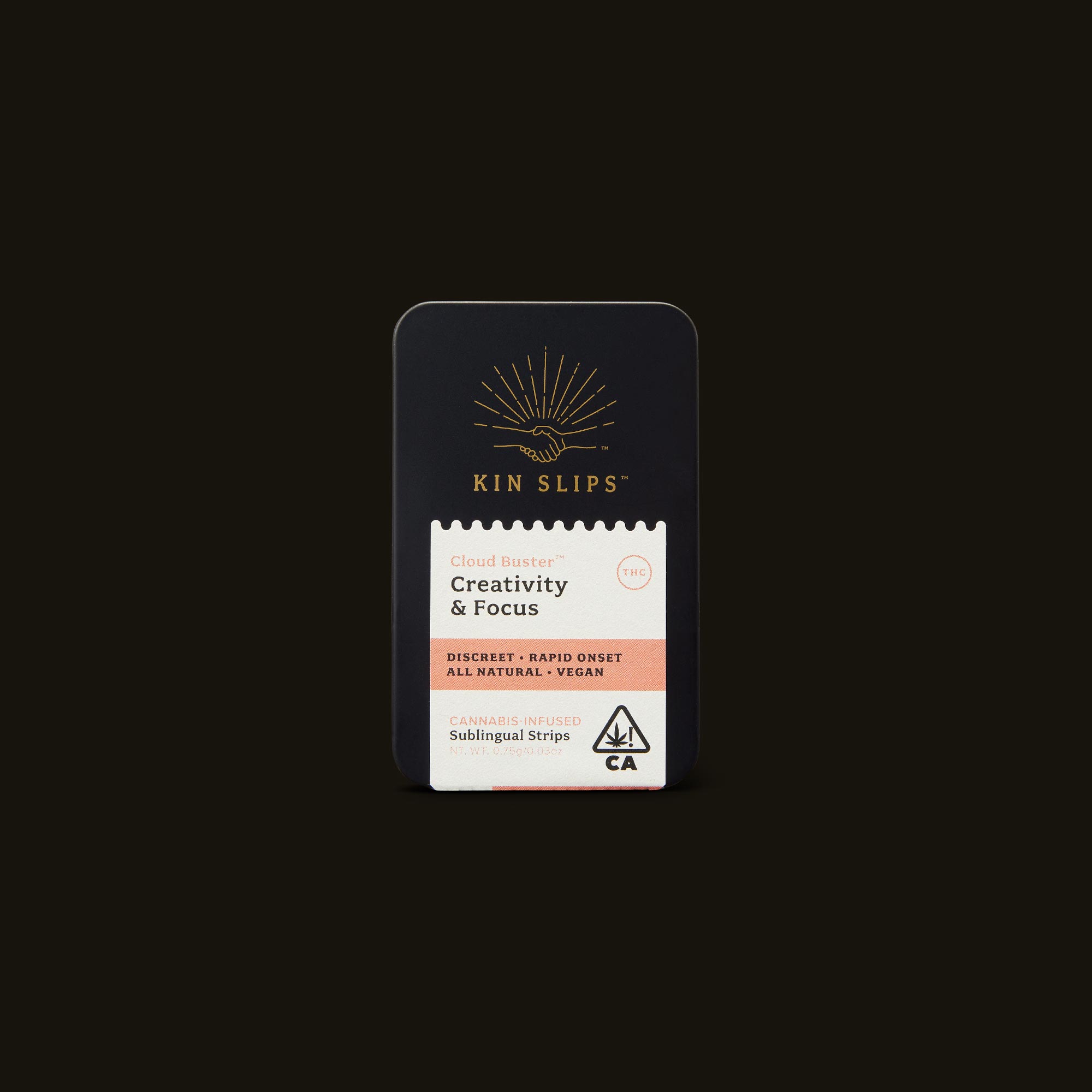 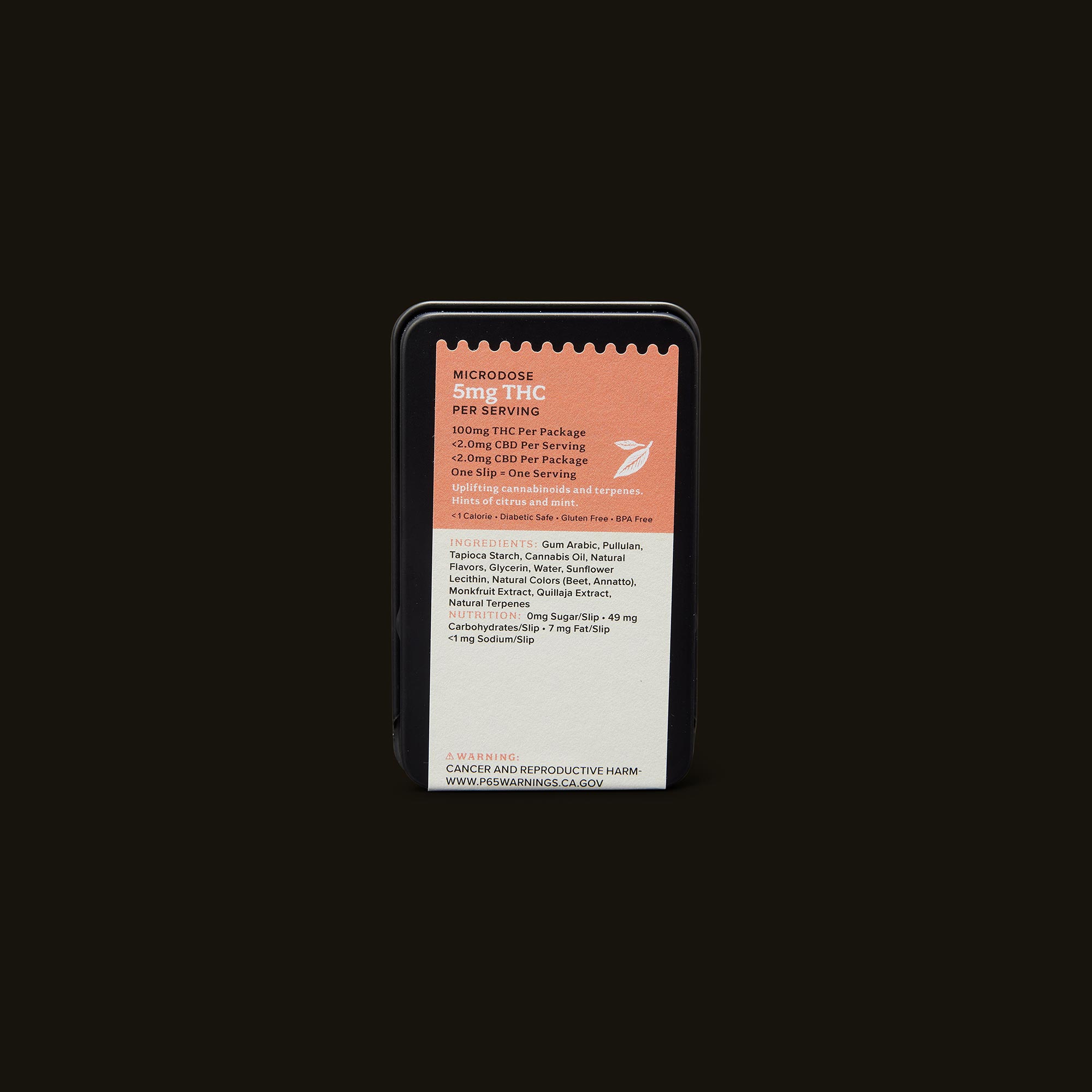 As our committee rates Cloud Buster Microdose, we capture their experience in real time through our ratings app and report everything back here.

Ranked 11 of 33 in Sublinguals for feeling Euphoric.

A Sublingual Gateway Into Endless Potential

With the help of two little strips, I was able to get more accomplished than I could have imagined.

IN REVIEW: Light enough for cannabis newbies and buildable for cannabis veterans, this 5mg THC sublingual strip should help you power through a creative project or everyday chores with an added sense of uplifted focus.

This was a refreshingly tasty sublingual with nice notes of citrus and tarragon. Given its fruit-flavored vibe, I found it appropriate to sit under my orange tree and read a new book while I waited for the high to take hold. I administered two 5mg THC sublingual strips that were very stylishly packaged. 20 such strips come in a packet making 100mg of THC total. The effects wrapped their tender loving arms around me rather quickly. I’d say about a half-hour for the first signs of vibrancy.

“It had such a carefree and fun side to it that I was essentially game for anything.”

The oranges in my tree, maybe over a hundred, took on a glowing hue, the leaves a penetrating shade of green. An immersive quality started to manifest, where I really felt a part of my surroundings rather than separate from it. A weird mind game also started to play out where I began to pick up discarded orange peels from my deck, left behind by citrus obsessed squirrels. In doing so I was in effect cleaning out my own mental garbage. It was at this moment that I found myself with the ability to focus in such a way where I could cut to the core of my attention.

Using this effect to my advantage, I started on a creative endeavor that had me finishing up a short story I was working on and then outlining another. This gave me a great sense of accomplishment and satisfaction that carried over to a kettlebell workout session brimming with energy. A great portion of this high was simply following along to the internal groove that was naturally flowing through me.

I had my Pandora station set to Native American Drum Music and swung those kettlebells with purpose. I did all this in my garage amidst a windstorm that sent branches flying in all directions. To anyone passing by, the image of me swinging steel to the sound of pan flutes while dirt devils collected themselves nearby would admittedly raise alarm bells as to my sanity. The thing about this edible high, however, is that I really didn’t care about optics. It had such a carefree and fun side to it that I was essentially game for anything.

I followed my workout with a soak in the townhouse development jacuzzi. It is always best to hit hot tubs in inclement weather such as it was. I was soon accompanied by two young lovers who I gathered wanted privacy but much like before, I didn’t really pay that any mind. I was in a blissful state of relaxation and wonder and I would not cut that short—until it got really cold, which of course it did.

Back in the comfort of a heated home, a full two hours after feeling this sublingual take effect, I still felt this high working with all its 10mg might (my preferred dosage). The quick onset coupled with a long duration makes this edible one I’d seek out in the future. I decided to further tap into its focusing properties by attempting a rather precarious house chore that I had been putting off.

“It is a revelatory high that helps you both hone in on the task at hand and then venture off into unchartered waters.”

Under no circumstances am I condoning the climbing of a tree in the attempt to cut off a high branch while you’re actually high yourself. I feel like that needs to be stated from the outset. But being fleet of foot as I sometimes am while high and being infinitely versed with holding on for dear life, I felt like I was sufficiently qualified to do just that.

There is an adventurous side to this tasty sublingual that cannot be denied. The branch in question had been scraping against our roof for some time now—making sound sleep rare to come by. I finally did something about it and I have Kin Slips to thank. It should also be noted that I took the precaution of fastening myself in with a harness so it wasn’t all “devil may care.”

If you think I felt a sense of satisfaction finishing a short story earlier that day you should have seen me raise my hand in victory once I was able to saw this bedeviled palm tree frond off with only one outstretched hand (the other was grabbing onto the trunk of the tree). Even my neighbor came out to congratulate me as it was scraping against his roof as well. I wished he came out earlier when I needed help steadying my ladder, but this high would not allow such bitterness. This was a time of celebration after all.

I felt a bit like “Rudy,” the perennial Notre Dame benchwarmer who recorded a sack in his final and only play as a collegiate footballer only to be hoisted up on the shoulders of his adoring teammates. Of course at this point, I was all alone but it didn’t stop me from admiring my handiwork. Simply put, this outstanding bit of yard care would not have been attempted under normal, non-Cloud-Buster circumstances.

In fulfilling a promise I made to my wife months ago, I once again would get on her good side and win her praises for at least an hour or two. This would place these Kin Slips in the vaunted category of “Yes Please, I Will Have More of That.” It is a revelatory high that helps you both hone in on the task at hand and then venture off into unchartered waters. For me it was doing a bit of tree trimming, for others it may be tackling an art project or picking up a new sport. What it won’t do is close you off to the possibilities—quite the contrary.

Be the first to review Cloud Buster Microdose from Kin Slips and help others find their high.