Brite Labs' Chem Dawg PAX Era Pod is herbal in flavor with a smooth and easy vapor quality. After a few hits, you should feel a strong, uplifting head high with a relaxing body buzz. This is a great high for getting outdoors and hanging out with your fur babies. 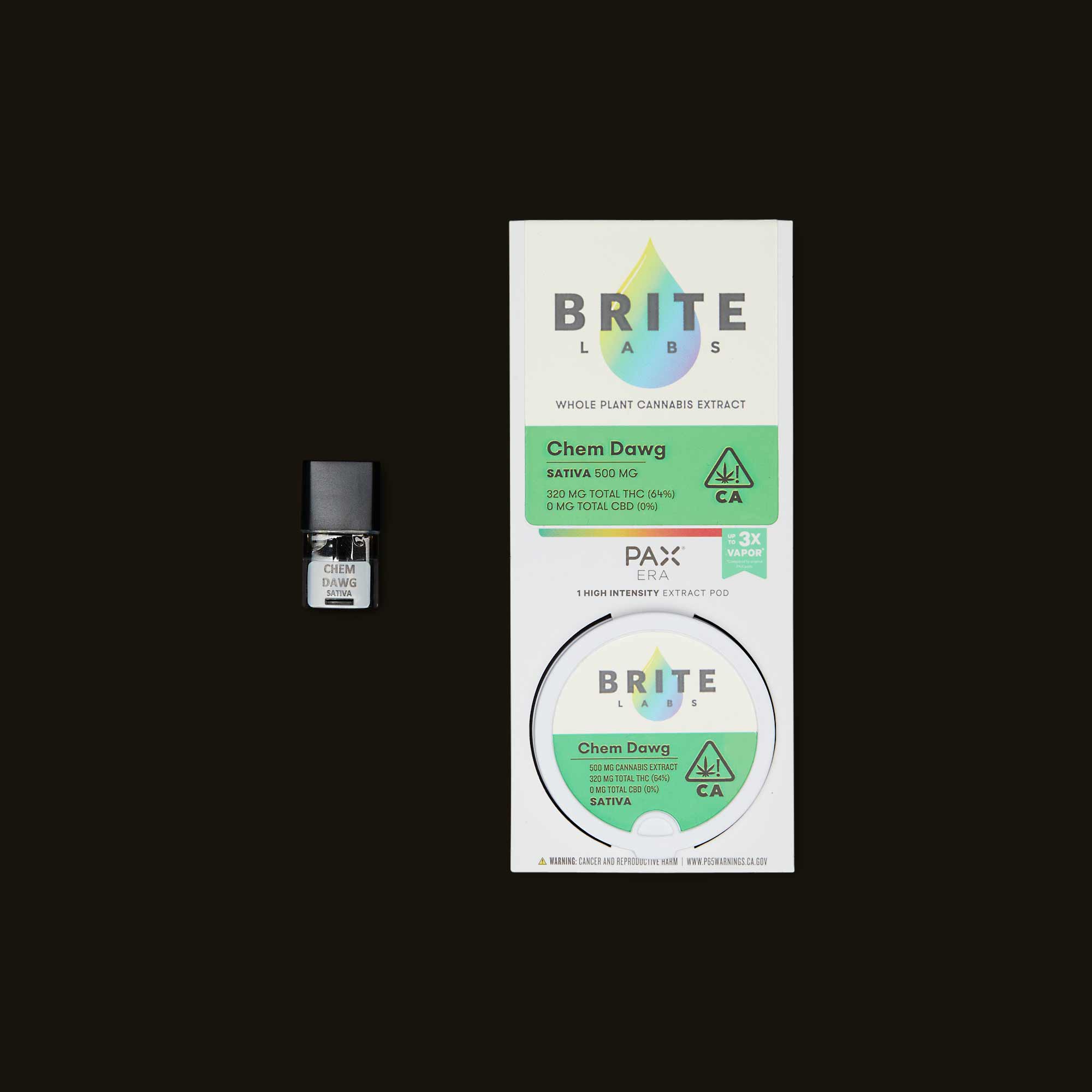 As our committee rates Chem Dawg PAX Era Pod, we capture their experience in real time through our ratings app and report everything back here.

Though I’m very high, I feel capable and happy. And though I’m in bed, I feel like I can get out.

A Brite Light At The End Of An Allergic Reaction

A few puffs of this bright, effervescent vape were all it took to pull me out of an allergy-induced panic.

Panic jolted through my dead, sleeping body like a lightning bolt, snapping me into consciousness. Immediately, I knew something was wrong. For one, terror woke me, not any of the 15 alarms I’d set the night before. And, more importantly, my eyes were stuck shut. Never a good sign. A cold wash of dread ran down my body. In a mere number of hours, I was to shoot the first episode of my new show at Snoop Dogg’s studios in Inglewood, the fruition of many months of work and my journalistic dreams of transitioning to on-camera work. This morning, there was no room for error.

“This morning, there was no room for error.”

I rose rigidly like a corpse, screaming. After coming to terms with the fact I was in the thralls of an allergic reaction to last night’s desert shellfish, I pulled my eyes open and looked at my phone. I was late, as in, if you leave now you’ll barely make it on time late. I had already fucked up by staying an extra night on vacation with the intention of waking up super early to drive three hours to the studio. That initial fuck up was then compounded by my stoned ass setting the alarms for PM not AM. And then, of course, cemented by said allergic reaction I had yet to fully grasp the severity of. Amidst flinging clothes into my suitcase and shouting orders at my boyfriend, who had shrunk silently into himself in an attempt to be neither seen nor heard, I found my PAX Era loaded with Brite Labs’ Chem Dawg pod. Thank fucking god.

For those of you who may not know, the PAX Era is a type of vape pen that has taken the weed industry by storm, simplifying the messy world of cartridges, batteries, and chargers that never seem to fit together. They’ve streamlined the vaping industry basically by creating the Juul of cannabis (PAX actually started Juul, but Juul branched off in 2017). Instead of every weed brand creating their own pen that fits its own cartridge, the PAX Era Pod model allows weed brands to create their own PAX Pods to work with PAX’s Era battery. It’s genius, simple, and very popular.

In the case of this massively important morning I had somehow already destroyed, I was lucky enough to have the Brite Labs Chem Dawg pod with me, one of the best I’ve ever tried. I hit the pen once. The rush of diesel, spicy flavor hit me like a great sativa should, bright like a cold whiskey sour on a hot summer day. I became alert—excited even—and felt like I was (almost) ready to look in the mirror. When I touched my face, however, it was itchy, my skin puffed with fluid. On second thought, maybe I’d hold off on facing my face head-on.

Having brought the cartridge on a little vacation to the SoCal area, I’d become quite attached to it. Despite being a weed journalist who’s tried many PAX pods, this was my first experience with Brite Labs products. Founded in 2014, the Oakland company’s whole focus is about creating “full-spectrum extracts in small batches with care to retain only the natural THC, cannabinoids, flavonoids, and terpenes found in the raw plant material, and nothing else.”

To quickly break down the concept of full-spectrum concentrates, many cartridges contain oil that has been stripped of the plant’s natural terpenes, cannabinoids, etc., because the method of extraction is so aggressive it blasts it all away, leaving only a crude type of oil that has very little taste or smell. Terpenes from fruits and other plants are then reintroduced back into the oil in the hopes of recreating the original strain’s attributes in the cheapest way possible. This is extremely common and extremely wack in my opinion. Full-spectrum oils preserve the integrity of the plant throughout the extraction process, so you’re actually hitting the strain you think you are, not some cheap zombie creation. Kudos to Brite Labs!

“A true sativa, a few puffs ought to leave you feeling creative, uplifted, and confident.”

And wow, did they ever do a beautiful job with this Chem Dawg oil. With a 64% THC content, it’s heavy enough to get you high but not so much that you feel weighed down by the feeling. A true sativa, a few puffs ought to leave you feeling creative, uplifted, and confident in whatever task you have at hand. Even if that task is navigating the most important morning of your career in a state of utter panic, having to decide whether to bail on the first day of a huge opportunity or make your on-camera debut looking like the friendly monster from The Goonies.

When I finally faced the mirror, I was horrified. One eye was swollen from the upper lid, the other from the lower, creating a very uncool symmetry to my disfigurement. Reddish skin hues came and went, signaling varying degrees of itchiness. My mouth had been reduced to a shapeless mass of lip-colored lumps. Clearly, this wouldn’t do.

A million thoughts ran through my head. Should I send a photo to my producer? Should I just show up and hope the makeup people send me home? If I leave at this very moment, will I even make it on time? And, obviously, Why the fuck did I eat oysters so far from the sea?

Just as I was taking a series of morose selfies to send to my production team, a text chimed:

“Hey Lindsay! We just got word that Snoop has to use the studio today for some last-minute video game tournament he’s putting together. We’ll have to move the shoot to Monday if that works for you?”

And just like that, a blue text bubble descended from the ever-loving universe to save my late, stupid, swollen ass. Levitating above the hotel carpet in sheer elation, I hit the PAX again, blowing the vapor into the mirror. Mustering a distorted grin, I snapped a selfie for the hell of it. Then I deleted it and went to the doctor.

Be the first to review Chem Dawg PAX Era Pod from Brite Labs and help others find their high.