dosist's all-in-one arouse pen measures each hit you take with a subtle vibration. This pen should leave you floating in a spacey euphoria, so plan on feeling unfocused and unbothered. Like most products for arousal, this one is more likely to enhance than inspire, but if you time it right, a great date night could be in store. 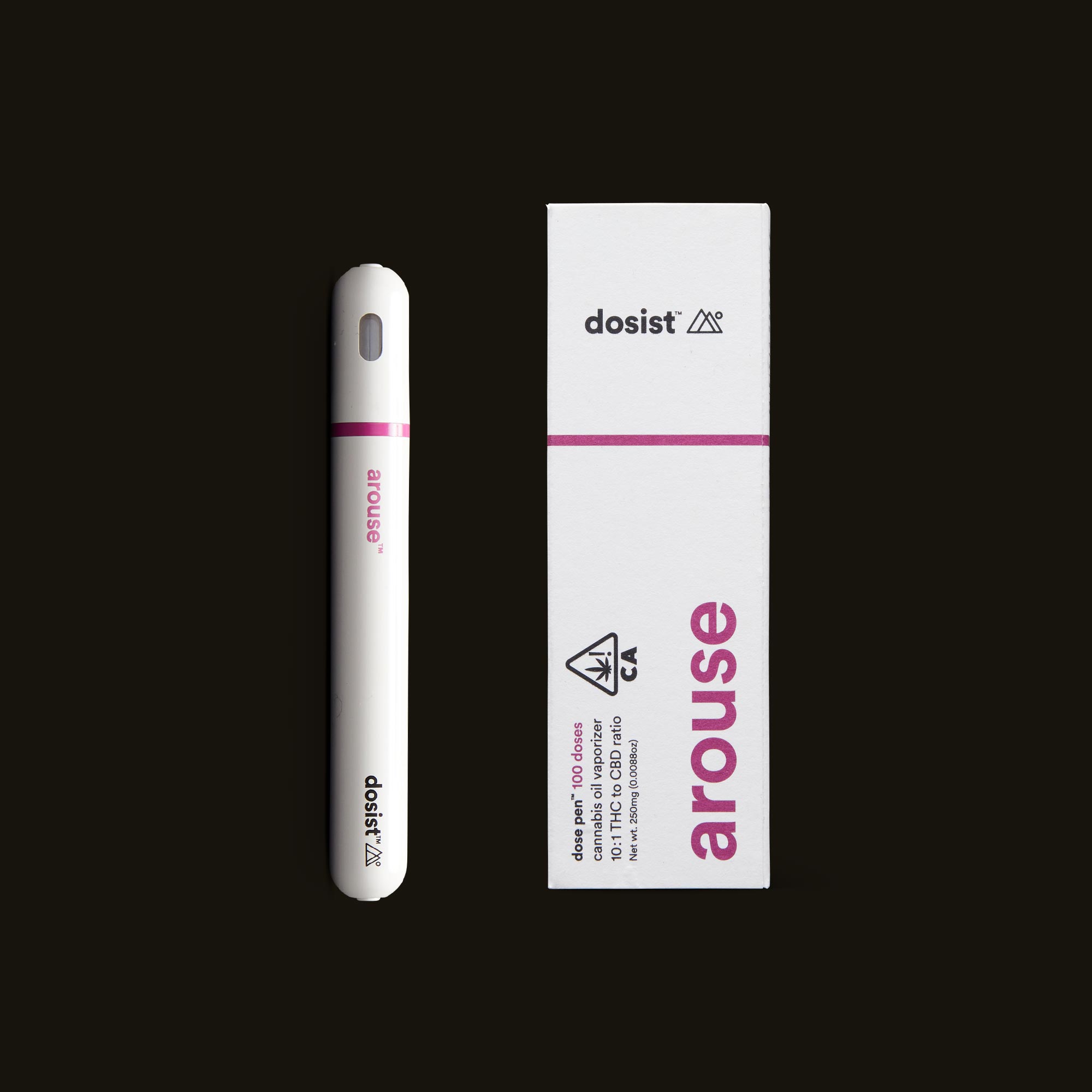 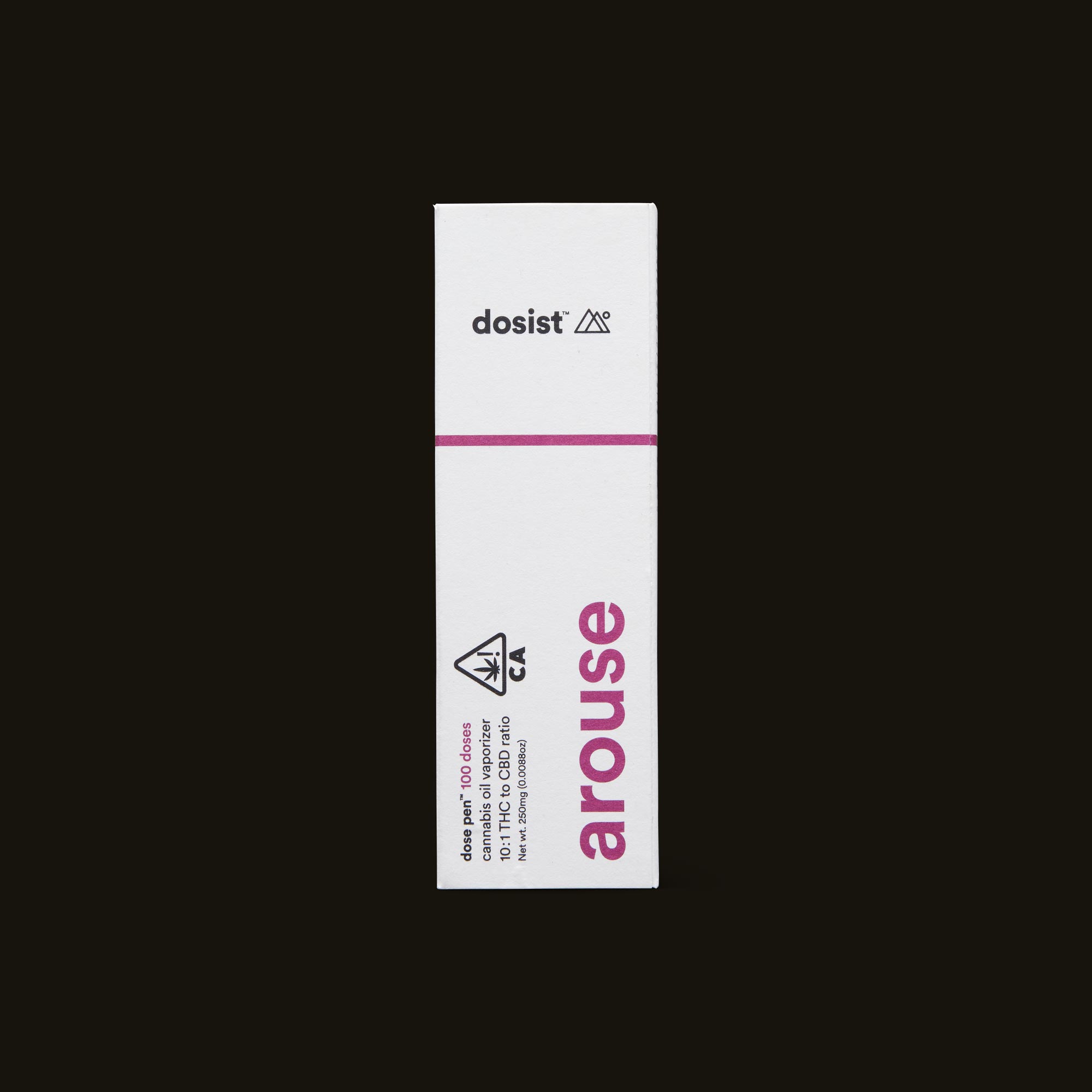 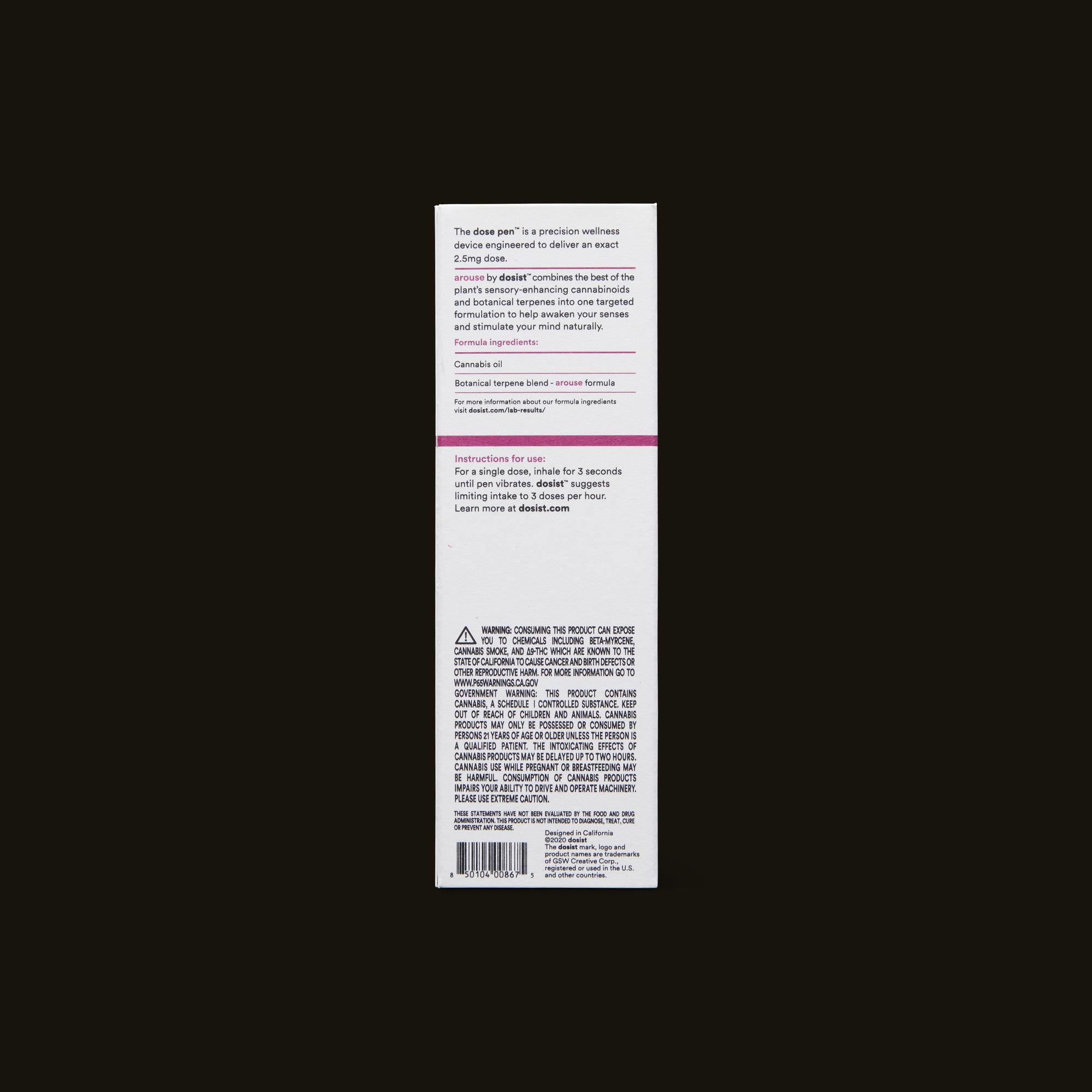 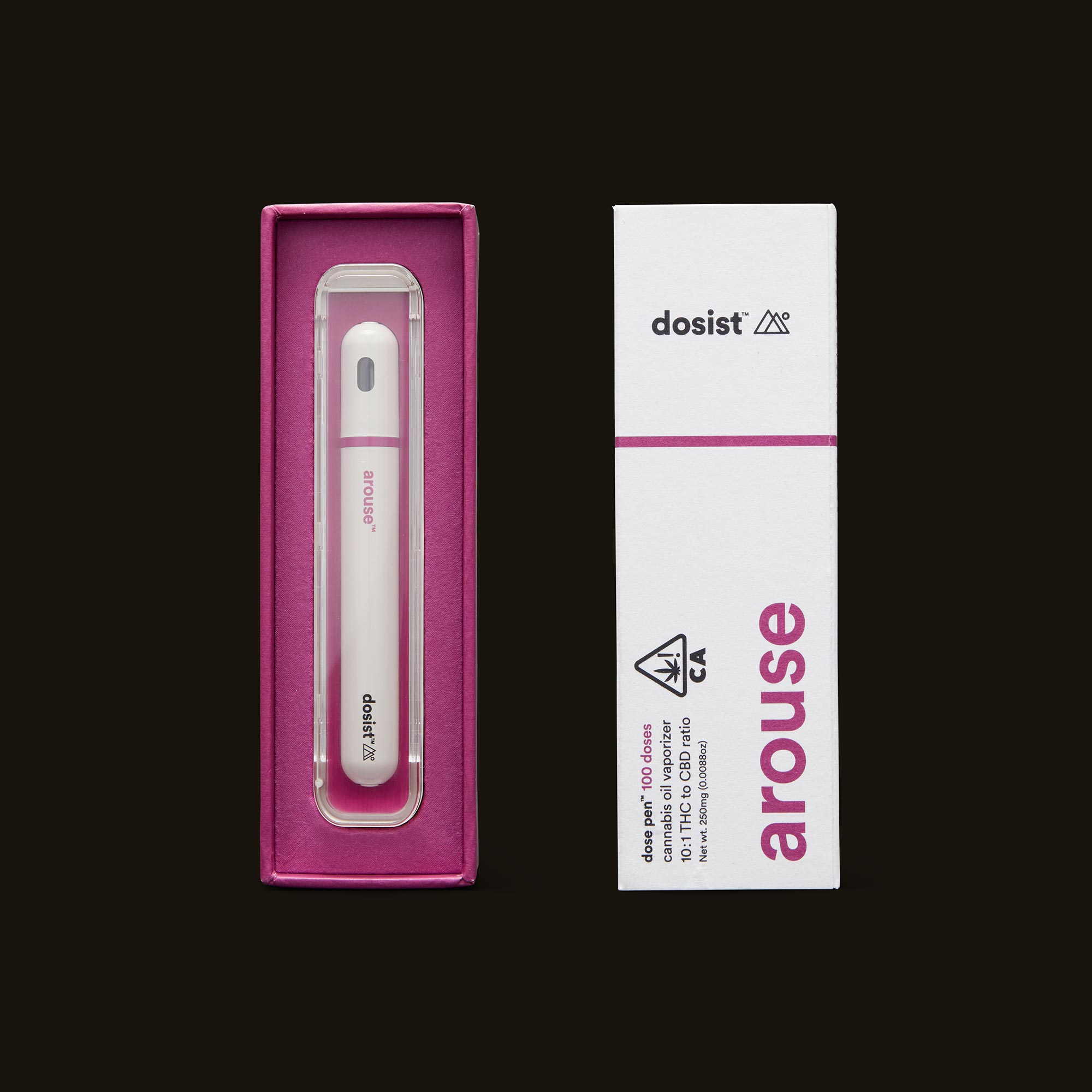 As our committee rates arouse dose pen, we capture their experience in real time through our ratings app and report everything back here.

I'm still very, very stoned. It's as if a veil of intoxication is separating me from the world around me, like a film over my eyes or something.

The Vape For Weddings And Funerals

Even though it's marketed as an arousing vape pen, I found it came in handy for two of life's most uncomfortable events. Read the full story and my review of dosist arouse.

You know it’s going to be a weird one when the day of your childhood friend’s wedding begins with a text from your ride reading, “I guess it’s not chill to bring ppl to a funeral ¯\_(ツ)_/¯.”

I sighed with relief. The excitement I’d felt for the marriage of two people I love and believe should be married (rare, I know) had only turned to dread when, a week before the wedding, my ride and date demanded I accompany him to a funeral the morning of. Without warning, another text appeared: “Fuck it, let’s do this.” Despite a litany protests on my end ranging from “no one brings friends to a funeral” to simply “plz no,” the wedding was important enough to bear this bizarre contingent. Rolling out of bed, I resigned myself to fate.

As a weed journalist, I always have a bevy of products that need reviewing. For this, the strangest of days, I grabbed Dosist’s Arouse vape pen, which on paper may seem like an odd choice. But being fresh out of a breakup, I was 100% certain a spontaneous sexual encounter would not come out of a day full of weddings and funerals. I’m a firm believer that sexy weed products only put you in the mood if you’re already in a situation where sexy times are bound to happen. Otherwise, they should just get you high like anything else. If anything, the rave reviews I’d heard about the Dosist line made me feel like I could count on having a good time no matter the situation.

“I hit it a few more times, and a warm feeling of calm washed over my tense little frame.”

Since being crowned a TIME “Best New Invention of 2017,” Dosist has been a hot commodity in the weed world. Slotted as the product to spearhead the anti-pharmaceutical movement, I was interested to see if it could take the place of, say, a klonopin, which I was sure to desire at some point during the day. Crashing the funeral of a stranger is a uniquely awful experience, the ultimate test of a weed product’s ability to keep you chill. Not that attending a raging wedding with a million people you haven’t seen since high school is relaxing either. Dosist had its work cut out. And it did not disappoint.

The funeral was in Malibu for someone loosely related to someone related to my ride/friend/funeral-and-wedding date, Brian. On the PCH, I began attempting to hit the Dosist. After spending a full minute trying to figure out which end to take a pull from (they look identical), an overwhelming wave of plastic inundated my zone. Flavor-wise, I give it a zero. It truly tasted like the creepy beige plastic encapsulating the oil. Pulling until I could pull no more, the vibration buzzed, and I let out a modest cloud of vapor. Thinking the vibration was part of its arousal shtick, I went on about what a fun little touch it was. Brian, who’s made millions in the weed industry, rudely illuminated me from the driver’s seat of his Porsche. “They all do that. It’s part of the medicinal aspect of the brand. How do you not know that?”

At 2mg of THC and 0.2mg of CBD per hit, I felt pretty fucking good after five solid hits. I hit it a few more times, and a warm feeling of calm washed over my tense little frame. I felt at peace with the crashing sea, with the fog slowly lifting to reveal another sunny day. I thought, I’m ready.

The loosely related relative had dropped dead out of nowhere, so the mood was low. He was fifty-something and judging from the affair, super rich. Aside from the intense grief I could not partake in, there were hors d'oeuvres and a mansion. There were surfboards and blonde people. There were golf carts. There was a Hawaiian catering truck which, thank god, served mai tais.

During the paddle out surfboard ceremony at Pointe Dume, I snuck away to take pictures of a German Shepard and a Shih Tzu in a patch of bougainvillea down the street. I continued to hit the Dosist, which, along with the cute dogs, kept me in a surprisingly happy mood. There’s a floaty quality to its high, a certain buoyancy that makes everything sparkle. It feels like you’re a bowling ball going down a lane with bumpers on it. While you can see the potential to fall in a proverbial gutter by becoming too stoned or letting the general weirdness of most situations puncture your psyche, you simply continue to cruise down the lane of life with a smile of your face. After consuming a number of mai tais at a speed that truly shocked Brian’s mother, we left and headed north to a little valley just south of Santa Barbara.

“A friend’s mom I hadn’t seen in years shimmied up to me, sloshing her drink, and asked, “Is that one of those weed pen things?” I passed it to her.”

The wedding took place at a semi-nice golf course in downtown Ojai where cinematic views of the mountains made up for exceedingly meh amenities. The groom hailed from a long line of drinkers, so the wedding was a rager. We arrived before dusk when most of the party was already drunk. My main concern at this point in the day was that the endless cascade of Coors Light flowing through my body mixed with the Dosist high would make me too tired, or worse, blacked out.

From the sunset ring ceremony on the green to the speeches and beyond, the Dosist kept me happy, bright, and balanced throughout the night. I didn’t even have to do coke in the bathroom like some of the other wedding attendees. The reception peaked beneath an enchanted oak tree on a hill. Lanterns hung like constellations in its branches, which overlooked a large tiled wood dance floor below.

In the middle of a dance off with a kid I’d once slapped in the face, I realized none of this would have been possible on klonopin, xanax, or any other pill necessary to feel comfortable throughout such an uncomfortable day. I thought about how wonderful weed is, and how Dosist’s angle of medicinal branding welcomes first-time users. From its precisely dosed hits to the vibration that ends the hit for you, this approach will open a beautiful horizon to many who are interested but intimidated by cannabis. As Nelly’s “Hot in Here” blasted through squeals in the warm summer air, a friend’s mom I hadn’t seen in years shimmied up to me, sloshing her drink, and asked, “Is that one of those weed pen things?” I passed it to her.

I am a late 40’s married male with kids that just in the last few years decided to try cannabis for relief of symptoms from MS. My wife on the other hand was vehemently against it. After my wife seeing the profound improvement in my life and mobility she decided to try cannabis for her back issues. A couple years later a friend of ours hooked us up with one of these little “arouse” pens, and it wasn’t 20 minutes we was heading home for the best sex we’ve had since we’ve been teenagers ! My sex drive went through the roof, my mobility was like I was in my 20’s again, and to top it all off she had no back problems at all that night ! It had a great head high and a body high buzz that intensified every touch. I would and will definitely but this product again. And , it’s become my wife’s favorite!