Heylo's Harlequin PAX Era Pod is sweet, smooth, and soothing. This vape is satisfying in both the intake and the high, which tends to be extremely heavy in the body. It should knock out cramps and wash over you with a wave of calm. Expect to melt into the couch and crave some takeout.

Ranked 4 of 238 in Vape Pens for feeling Relaxed. 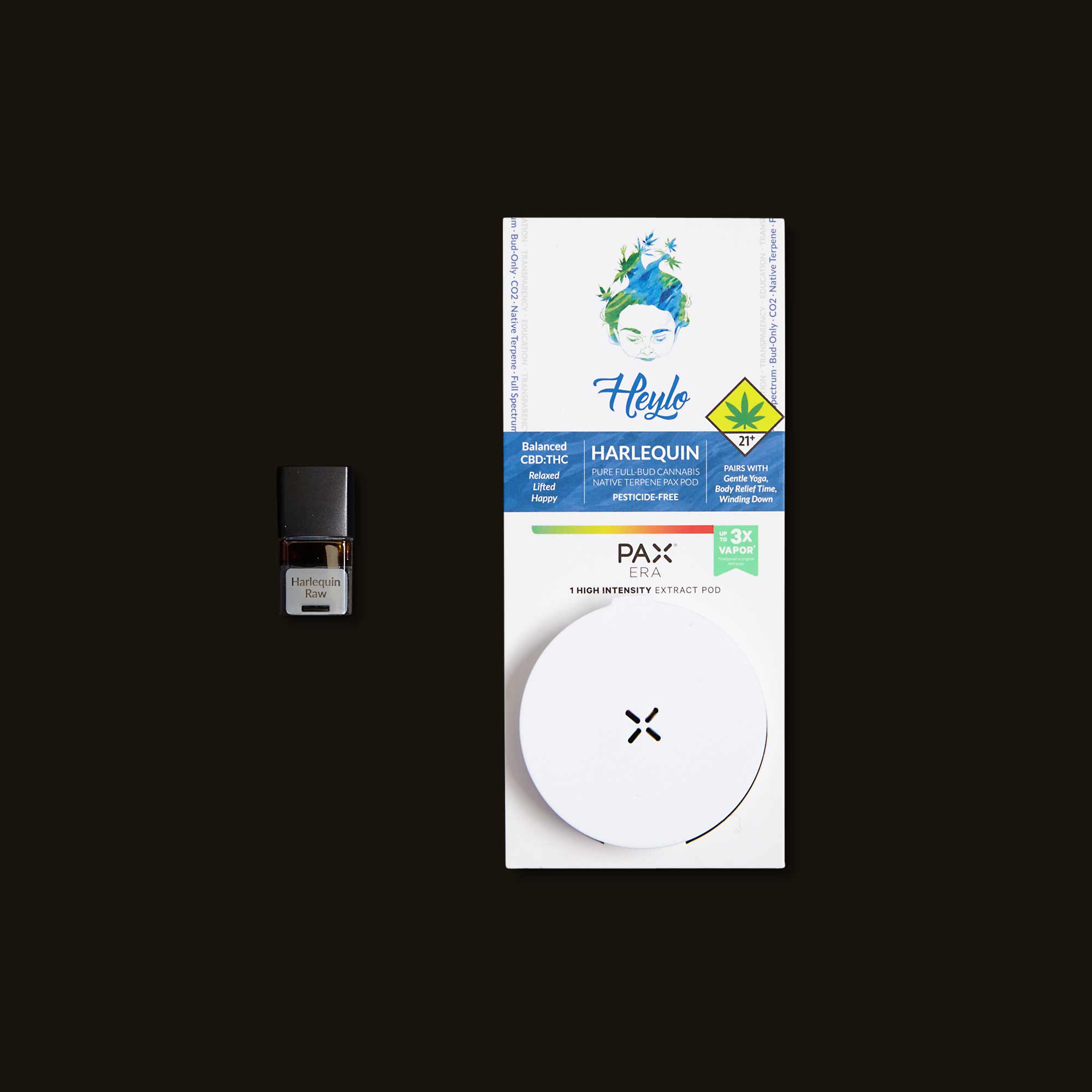 As our committee rates Harlequin PAX Era Pod, we capture their experience in real time through our ratings app and report everything back here.

Ranked 4 of 238 in Vape Pens for feeling Relaxed.

The relaxed, introspective nature of this high helped me fully appreciate the Twilight-themed road trip of my dreams.

IN REVIEW: Heylo's Harlequin PAX Pod is perfect for daydreaming during long car rides. Just ask reviewer Brianna, who enjoyed the relaxing, pain-relieving benefits of this pod while visiting the town featured in the Twilight movie series. A few puffs are all you'll need to be cruising toward bliss.

The drive from Castle Rock, a small, Southwestern town on the banks of the Cowlitz river, to Forks, a town on the western edge of the Olympic Forest, is an ambitious day’s drive, but a necessary one nonetheless. You see, in order for me to properly celebrate the 10-year anniversary of the most important film of our time, Twilight 2: New Moon, I needed to pilgrimage to the ancestral home of sparkling vampires and at-will werewolves, where the majestic rain collides with a pale grey coastline, and the main street still revels in the spoils of a franchise that reshaped the fuckability of werewolves and vampires for generations.

Forks might not be on the vacation-radar for most, especially 10 years after the Twilight revolution, but this road trip had me crawling out of my skin with excitement. This magical area of the globe is my literal paradise. Harlequin was my companion on this adventure, selected with the specific hopes that it could temper the inappropriately screechy super-fan in me without dampening my enthusiasm. I was thrilled to find it did that and more.

“The rips were fat indeed, but they were as light as gossamer.”

Harlequin has long been a reliable medicinal strain, typically with a 2:1 (or somewhere thereabouts) ratio of CBD to THC. As such, it has a singular balance of soothing relaxation and wakeful bliss. Heylo’s CO2-distilled iteration has a THC content of 21.2% alongside 39.8% CBD, and the resulting high is downright glorious. I’ll get to that, but I first have to mention the inhale was grassy and fresh with a trace of citrus on the exhale that rounded out the mouthfeel. There was a prickle in the back of my throat, and I could feel the impending creep of dry mouth, but the draws were mostly comfortable. In fact, I found myself drawing from my PAX for what felt like longer than usual because the hit was so sheer, lungfuls felt like tepid puffs. I don't know if I should credit that bug/feature to PAX or Heylo, so I’ll just thank both.

Now, I’m down for scenic drives, but the 6+ hours of gassing and braking (including a side quest through Seattle rush hour for an Archie McPhee drop-in) set my calf muscles to cramping something terrible. Cue Harlequin. Decompression from the meandering drive through farmland, big city, and rugged coast was imperative if I was going to be in top form for Forks, so concluding a day of sightseeing with a few fat rips of this pod were critical. The rips were fat indeed, but they were as light as gossamer and left me feeling sparklier than Edward’s trifling behind as he fled Forks to spare Bella from aging alongside his glittering, ageless, vegetarian vampire self. Before long, my legs cramps had evaporated, my hips felt loose and bouncy, and my arms became flexible once again. In no time, I had become one with a Port Angeles motel room davenport, snoozing into my armpit as I dreamed of Sam Uley, alpha of the “wolfpack,” shirtless and wrestling/passionately making out with the buffest of all the sparkly vampires, Emmet Cullen.

“Exhausted from living my absolute best life, the onset hit me like a bucket of warm bathwater.”

The next morning, I puffed Heylo’s Harlequin pod sparingly, letting it guide me through the wonders of the Olympics as the cool mist of the Salish Sea refreshed my vigor. Soon enough we had closed in on infamous Forks. I knew that the primary function of this vape was relaxation and relief, so overindulging would surely lead to the type of naptime foolishness that had no place on my Team Wolfpack schedule of events. I withheld using the vape again until the evening.

Several hours later, when the day was over and I’d filled my proverbial cup with Twilight nostalgia and spent enough time in a car that I felt permanently stuck in a weird crouch, I revisited the pod. In this moment, exhausted from living my absolute best life, the onset hit me like a bucket of warm bathwater. Again, I felt each of my sore spots evaporate into relaxation. I broke open a new sketchbook and began sketching the type of fanart that will never see the light of day while Netflix hummed in my periphery. As I slowly drifted off into my well-earned slumber, I thought, what a perfect end to a perfect day.

I had Harlequin to thank for that wash of euphoric comprehension, without which my day would have ended with the kind of post-vacation grumps you develop after the long-ass car ride home from paradise. No werewolves or sparkle vamps were spotted on this trip (le sigh), but Harlequin transmuted any disappointment into a sweetly melancholy, vaguely queer lust, which more than earns its high rating.

Be the first to review Harlequin PAX Era Pod from Heylo and help others find their high.