Island's Lemon Wreck PAX Era Pod is a potent vape cartridge with a lemony flavor and exceptional vapor quality. The high should leave you feeling clear, calm, and focused with a touch of potential drowsiness as the high fades. By the time the munchies set in, you should be feeling amused and maybe a little dreamy. This could be a great addition to a study session or beach day.

Ranked 60 of 237 in Vape Pens for feeling Relaxed. 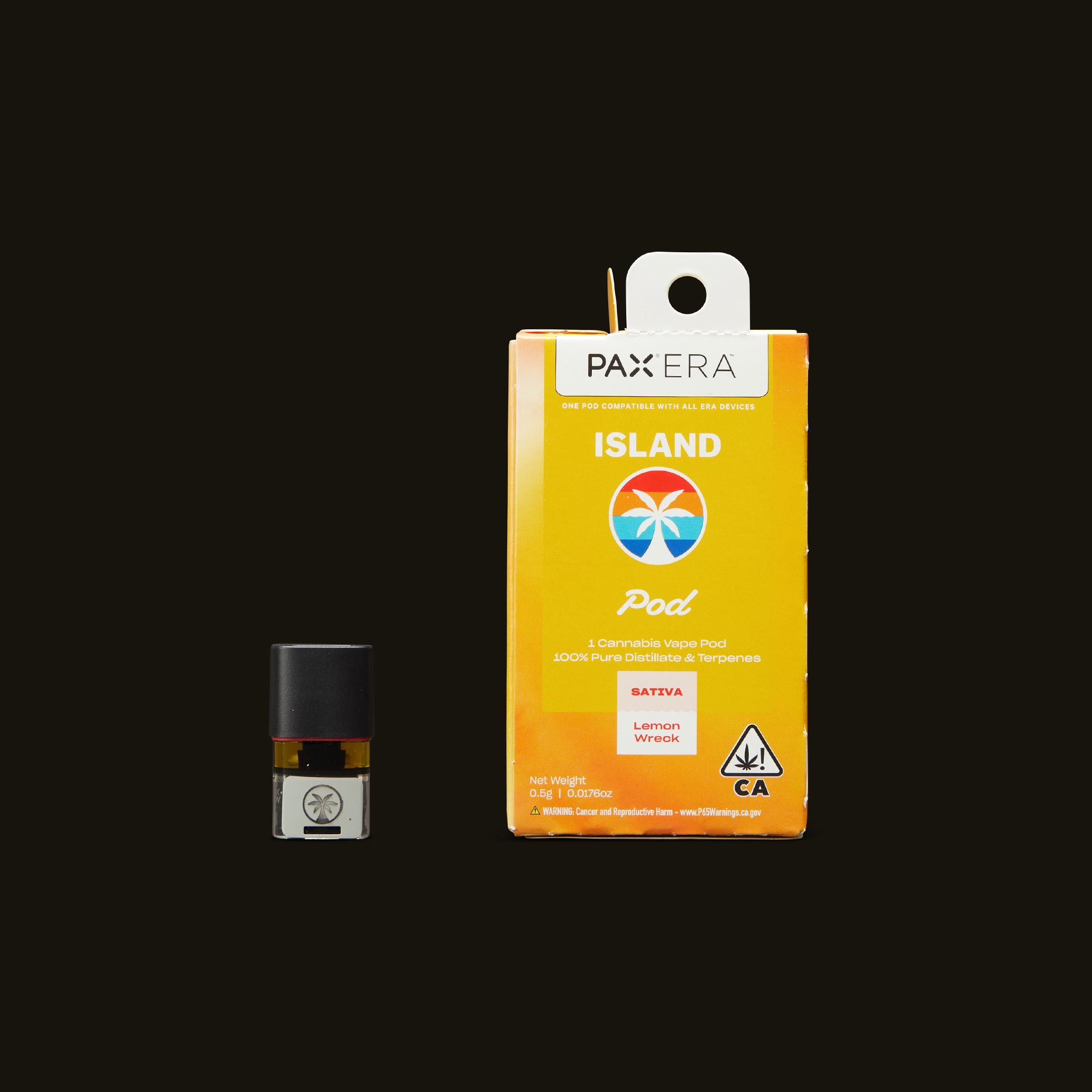 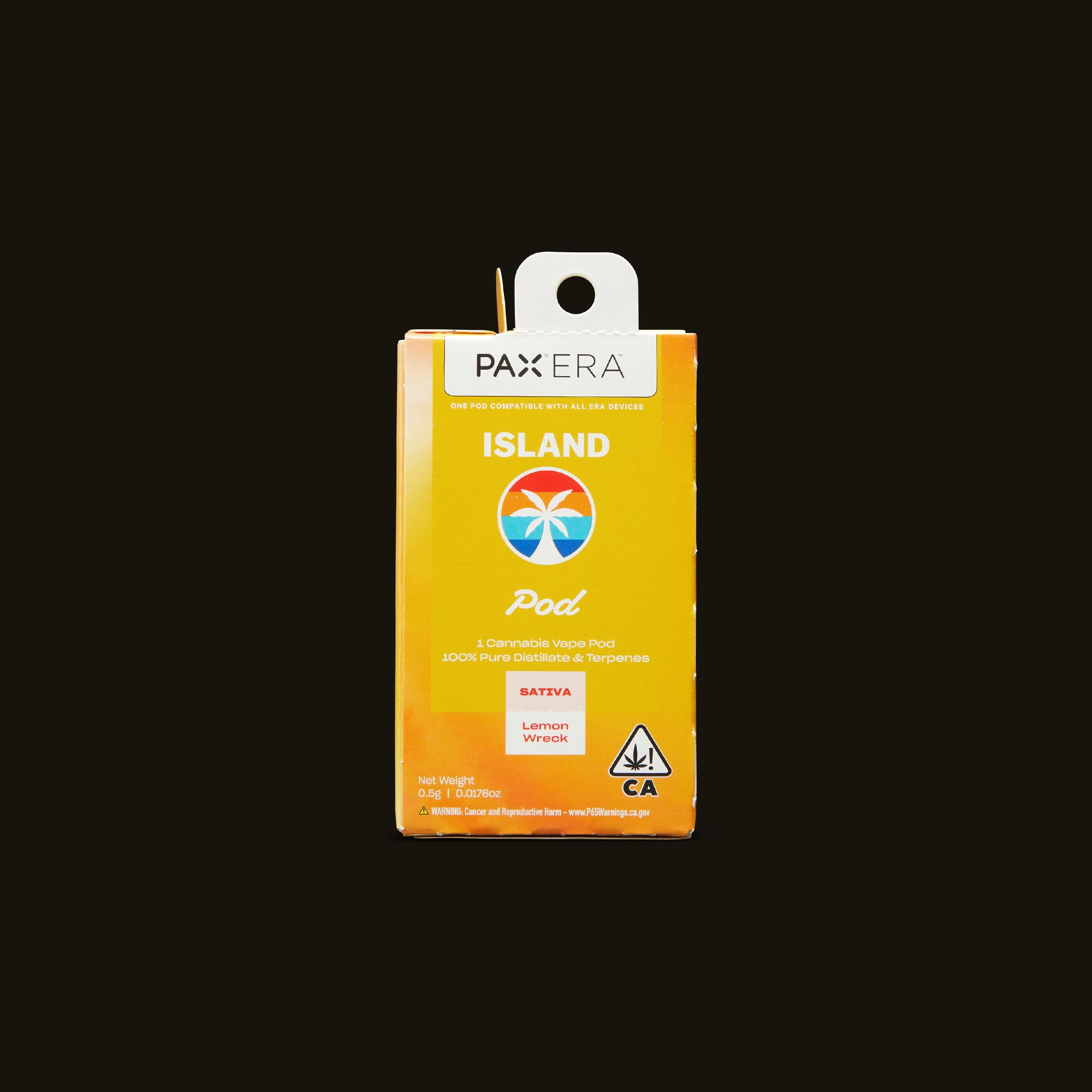 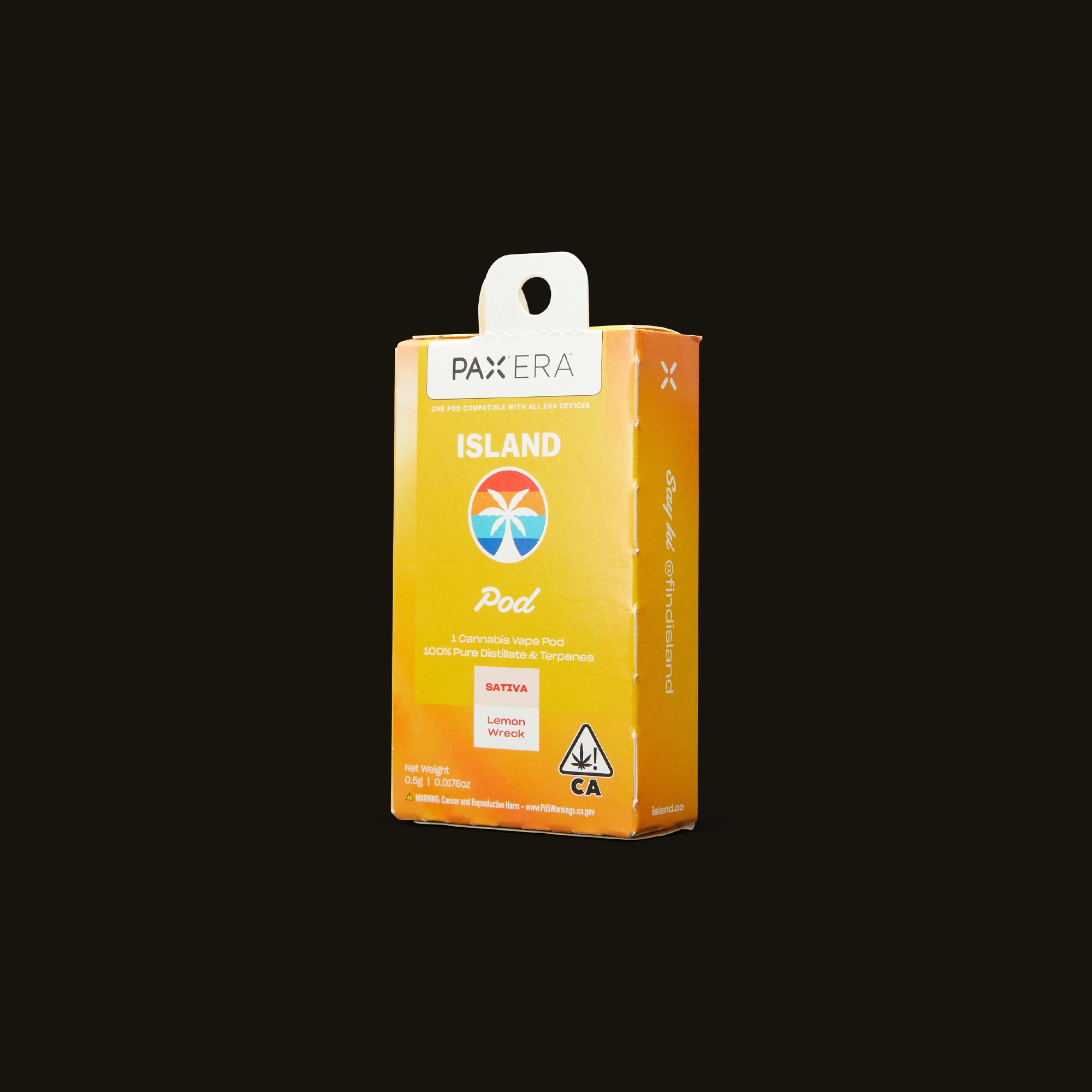 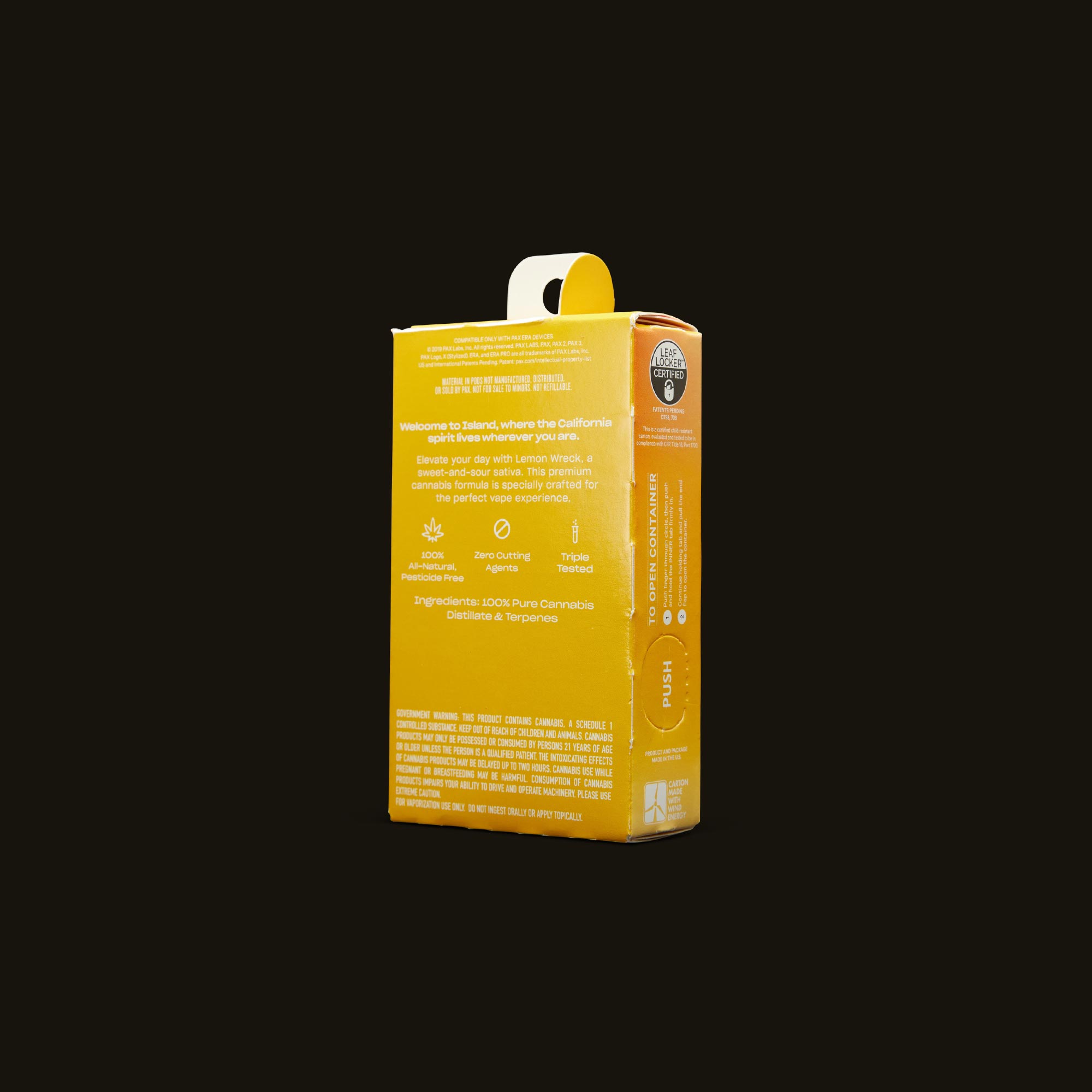 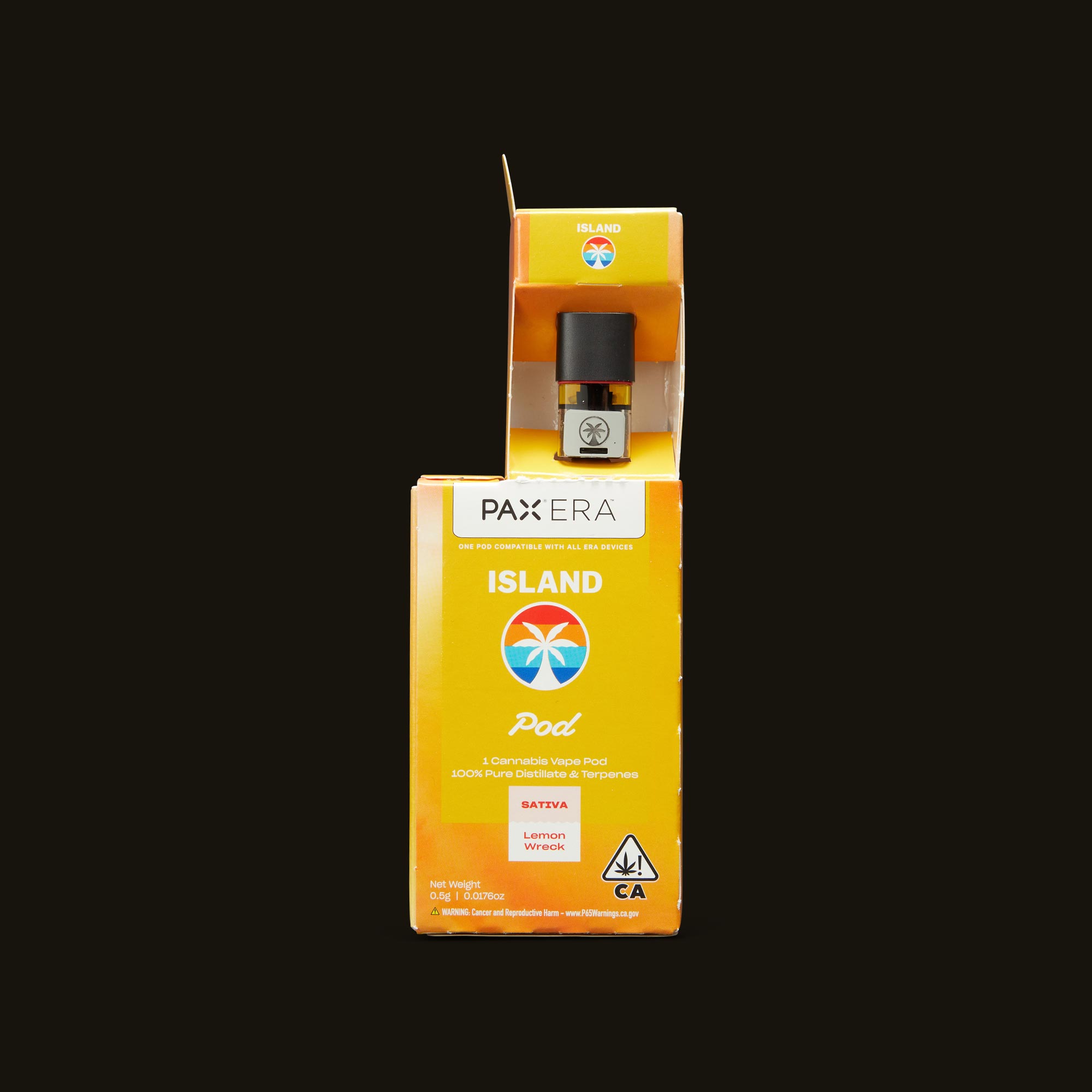 As our committee rates Lemon Wreck PAX Era Pod, we capture their experience in real time through our ratings app and report everything back here.

Ranked 60 of 237 in Vape Pens for feeling Relaxed.

The Future Looks Laid Back

PAX Eras are the way of the future, and this upbeat sativa pod showed me the way.

I remember puffing a vaporizer for the first time around six years ago and thinking, this is insane. Also, this is the future. I feel like the PAX Era is an evolution of the small, disposable pens and the screw-on cartridges that are now common to dispensaries. It feels even more futuristic somehow. It’s button-free, connects to an app for temperature control, and looks like something out of Star Trek—all major pluses in my book.

“I admired the light amber oil and tiny, cute palm tree printed on the canister.”

I recently tried Island’s Lemon Wreck PAX Era Pod and it confirmed my suspicions this tool is indeed the way of the future. In case you didn’t know, Island established themselves as a premium cannabis brand four years ago in Los Angeles. While they’ve primarily offered flower and pre-rolls in the past, their venture into cartridges is a welcome departure. Holding the pod up to the sunlight, I admired the light amber oil and tiny, cute palm tree printed on the canister. The small, stamp-sized cartridge snapped into the PAX Era easily and with a little suck of the pen, I was off to the races. I made my wife breakfast and got to work, writing a blog while listening to Japanese city pop and feeling a wave of ideas and connections wash over me.

It tasted smooth, slightly warm, and citrusy with sweet overtones. The vapor felt like a fuzzy, lemon-flavored cotton candy. I have no idea why, but a lot of vaporizer fluids taste like licorice to me and this one was no exception. I think it might be propylene glycol (an additive designed to help products retain moisture), but luckily for me, I tend to like the taste. In this particular scenario, it tasted smooth and accentuated the dominant sweet and sour Lemon Wreck flavor. Still, there wasn’t much of a lingering smell, which was a positive to me. I’m a big fan of discreet vaporizers and this one hit the nail on the head in that regard. It fit comfortably in a pocket and unlike some portable vapes, I wasn’t worried about it leaking. For a few weeks, everywhere I went, this PAX went with me.

Lemon Wreck is a sativa blend, which proved to be energizing and ticklish for me. These upbeat effects made it great for running errands and riding in the car for hours at a time. I also can’t recommend this pod enough for family gatherings. In spite of cannabis now being legal in California, certain relatives still look down on me for my use of the herb while they kill eight IPAs and stumble around the backyard. The solution? Go around the corner, take a three-second draw, and suddenly things are tolerable again. I’m telling you, it’s a relationship saver.

“One or two draws can be enough to set me straight, while four to five can get me pretty stoned.”

This vape had another advantage in that the effects tended to dissipate after about 20 to 30 minutes, allowing me to continually adjust my high as I saw fit. As opposed to edibles, which can leave me feeling stoned for hours on end, this vape allows me to better control the mood I want and when. One or two draws can be enough to set me straight, while four to five can get me pretty stoned. Anything beyond that and I’m on the couch playing video games or curled up in bed. Though there are times I want to be extra conscious about how much I’m ingesting, and for those situations, PAX has a bluetooth-linked app to help you control temperature, flavor, and intake.

I was delightfully surprised to find different modes are catered to specific profiles; for example, you can use stealth mode for ultimate discretion and efficiency mode so you don’t waste a drop of your precious Lemon Wreck oil. I also tinkered with the session controls, which made sure I didn’t inhale more than I intended by automatically shutting off after I set the dials to a certain timeframe. The app can even make the pen perform a little light show, if you’re into that kind of thing. Otherwise, the device works perfectly fine without syncing up to the Cloud, so it’s totally up to you whether you get technical with it.

All in all, for a pen that’s about the size and shape of a USB flash drive, I think it’s pretty nifty and forward-thinking. As far as the cartridge itself, Island’s Lemon Wreck oil definitely improved my mood. Every time I took a quick inhale, I could tell it was a smooth, delicious blend of some very good cannabis. Even though I don’t think I’ll ever entirely switch over from regular old bud, I know which vape I’ll be reaching for next time I want to switch things up.

This is was the first product I ever tried from Island and it's still my favorite. High is lovely with it's uplifting effects. Perfect for that happy hour vibe.